Inspired by a performance of his favorite play, "Volpone," 20th-century millionaire Cecil Fox devises an intricate plan to trick three of his former mistresses into believing he is dying. Although the women are wealthy in their own right, all have good reason to covet his fortune. To assist him in his scheme, Fox hires William McFly, a gigolo and sometime actor, to act as his secretary/servant. Fox is soon visited at his "deathbed" by the three former mistresses: Merle McGill, a fading Hollywood sex symbol; Princess Dominique, who once took a cruise on Fox's yacht; and Lone Star Crockett, a Texas hypochondriac who travels with an enigmatic nurse/companion. As Fox and McFly act out the charade, things take an unexpected turn from comical farce to full-blown murder mystery.

In a two-year period, Joseph L. Mankiewicz won four Oscars for writing and directing both 'A Letter to Three Wives' and what is widely considered to be his masterpiece, the bitingly satirical backstage tale, 'All About Eve.' Known more for his literate, deliciously lyrical and witty screenplays than his static directorial style, Mankiewicz helmed several fine pictures following 'Eve,' but mounting the elephantine and problem-ridden remake of 'Cleopatra' with Elizabeth Taylor and Richard Burton nearly killed him, and its subsequent critical lambasting sent him into a deep depression that lasted nearly two years. He hoped 'The Honey Pot,' an adaptation of a Frederick Knott ('Dial M for Murder') play, which itself was loosely based on Ben Jonson's Elizabethan comedy 'Volpone,' would mark a return to the light-hearted, acerbic films for which he was best known.

Unfortunately, for all his enviable talent, Mankiewicz is often his own worst enemy, and his inflated sense of self-importance and overblown intellectualism occasionally get the better of him. The resulting films are rambling, indulgent productions that contain nuggets of brilliance but can't sustain themselves over the course of an elongated running time, and 'The Honey Pot' is a prime example. Thank goodness the original 150-minute cut was mercifully trimmed down to 132 minutes, but even that length is bloated. Impeccably written conversations go on way too long, almost as if Mankiewicz can't bear to mute the sound of his own voice. All the palaver stymies the clever story, which doesn't really kick into gear until the final 45 minutes.

In his insightful biography of Mankiewicz, author Kenneth Geist asserts, "The observation that 'life louses up our (personal) scripts' - our plans for careers, romances, or even a single day''s activity - is one of Joseph Mankiewicz's most frequent laments." And that's the precise point Mankiewicz tries to convey in 'The Honey Pot.' Pompous ass supreme Cecil Fox (Rex Harrison) professes to have all the money in the world, and his obscene wealth and utter boredom inspire him to stage an elaborate ruse for his own amusement that's designed to hoodwink and embarrass three of his former flames. Much like the formula employed in 'A Letter to Three Wives,' Cecil uses written correspondence to entice his ex-lovers to his palatial Venetian villa. (One critic hilariously dubbed it 'A Letter to Three Bitches.') He tells the trio he's near death (when in reality he's healthy as a horse) and needs to decide to whom he will bequeath his vast fortune. (Of course, he ultimately plans to royally shaft them all and get a good guffaw out of their outrage and devastation.)

Two of the three women - ditzy Hollywood actress Merle McGill (Edie Adams) and the snootily regal Princess Dominique (Capucine) - have fallen on hard times. Their fortunes have vanished and they hope to win Cecil's favor, as well as his millions, so they can once more live in the lavish style to which they have become accustomed. The third, Mrs. Lone Star Crockett Sheridan (Susan Hayward), a blunt Texan heiress in the Molly Brown vein, has more money than she knows what to do with, but can you ever have too much? Like the famous Madonna song, she wants "more, more, more," and is willing to flatten her two competitors to get it. Cecil's newly hired secretary, out-of-work actor William McFly (Cliff Robertson) - no relation to Marty - helps him orchestrate the charade, but Mrs. Sheridan's nurse, Sarah Watkins (Maggie Smith) is smarter than the three avaricious ninnies and just might be on to her debonair host and his hunky sidekick.

Though not nearly as rife with strife as 'Cleopatra,' 'The Honey Pot' was plagued with problems from the start. When Harrison's wife, actress Rachel Roberts, was told she'd lost the role of the nurse to Smith, she attempted suicide. And during production, Hayward's husband suddenly fell ill and died, prompting a shooting delay. Filming dragged on for five months, and the running time ballooned to two-and-a-half hours, an eternity for a drawing-room comedy. A disastrous preview prompted Mankiewicz to make some cuts, but the editing often seems choppy. Instead of shortening scenes, he simply lopped them off, and the result is a lumbering, strained narrative that craves several kickstarts.

And yet there's a lot to like about 'The Honey Pot,' too. Mankiewicz may shoot his script in a boring manner, but you won't find more elevated, pithy language in a feature film. (Mankiewicz reportedly felt 'The Honey Pot' was the finest screenplay of his career, and that includes the peerless 'All About Eve.') Hearing Harrison and Smith recite it is pure bliss (maybe because they're British; coming out of American mouths it sounds slightly affected). Smith, in her first leading role, steals the show with a spirited, spunky portrayal. Harrison is also a delight, and is at his best sparring with Smith. Hayward does a bad Bette Davis impression as the haughty Texan matron (you almost expect her to drawl, "Fasten your seat belts, it's going to be a bumpy night"), but it's a hoot to watch her chew the scenery and chew out her rivals.

Mystery and murder perk up the plot and add a bit of intrigue to the proceedings, but hard as 'The Honey Pot' tries, it can't quite capture our fancy. Mankiewicz writes some terrific banter and one humdinger of a speech for Harrison, but all that clever talk and not much action doesn't add up to a satisfying film. 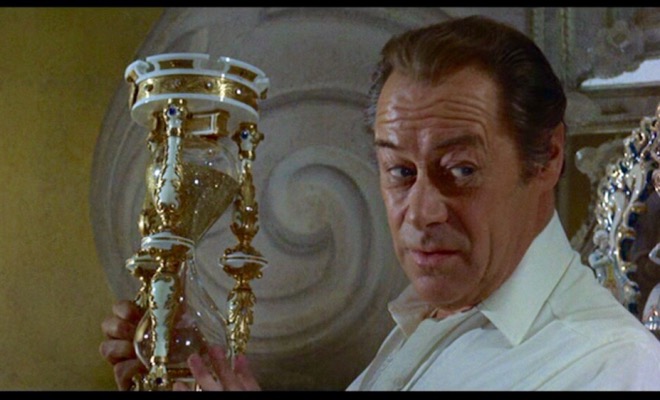 'The Honey Pot' arrives on Blu-ray packaged in a standard case. Video codec is 1080p/AVC MPEG-4 and audio is DTS-HD Master Audio 2.0. Once the disc is inserted into the player, the static menu without music immediately pops up; no previews or promos precede it.

Though 'The Honey Pot' takes place in Venice, only a few exterior location shots are used, which is a shame given the city's glorious scenic elements. (David Lean's 'Summertime' this ain't.) As a result, the overall image flaunts a stagnant feel, yet despite its entrapment in stuffy interiors, the 1080p/AVC MPEG-4 transfer looks quite good overall. Some shots appear a bit soft and grainy, but pleasing clarity and solid contrast prevail, both of which punch up the vibrancy of the lavishly decorated sets. Grain levels occasionally fluctuate, but for the most part remain stable and provide a cozy film-like feel, and only a few stray marks dot the source material. Blacks carry appropriate weight and flesh tones appear natural, but colors remain slightly muted. Some sporadic bursts of red enliven the frame now and then, but other hues don't grab the eye. Close-ups, however, are nicely defined, but all the detail doesn't do the aging leading ladies, especially Hayward and Capucine, any favors. The texture and craftsmanship of costumes and decorative items are easy to discern, and shadow delineation is fine during nocturnal scenes. No banding, noise, or pixelation intrude, and any digital enhancements have been applied judiciously. While far from a knock-your-socks-off effort, this transfer is very watchable and should please fans of this erudite black comedy.

As a dialogue-driven film shot mostly on interior soundstages, 'The Honey Pot' doesn't require a bells-and-whistles soundtrack...and Kino doesn't supply one. What the studio does offer is a functional DTS-HD Master Audio 2.0 mono track that supplies clear, well-modulated audio that serves the material well. The classical music interludes and bits of scoring sound rich and robust, and all of Mankiewicz's elegantly constructed repartee is easy to comprehend. No age-related imperfections, such as hiss, pops, and crackles, afflict the mix, and only a few hints of mild distortion occasionally crop up. Though far from showy, this track fulfills its requirements with ease.

The only extra included is the film's three-minute original theatrical trailer, which touts the big-name cast and sophistication of the script.

Though it possesses some bright moments and a couple of clever twists, 'The Honey Pot' is not one of writer-director Joseph L. Mankiewicz's finer efforts. The uptight, self-indulgent comedy about a maniacal millionaire and a trio of money-grubbing former lovers who compete for his favor (and future inheritance) tries to let its hair down now and then, but never quite succeeds, while testing viewer patience with its meandering pacing and highbrow airs. The literate script only plays well in fits and starts, and though Harrison and Smith sparkle, the rest of the cast often seems ill at ease. Kino Lorber's Blu-ray presentation features adequate video and audio transfers, but the only supplement is a trailer. Fans of the actors and director will surely appreciate this witty yet tiresome misfire, but it's a toss-up whether they'll like it.

Sale Price 16.99
List Price 29.95
Buy Now
3rd Party 12.13
In Stock.
See what people are saying about this story or others
See Comments in Forum
Previous Next
Pre-Orders
Tomorrow's latest releases