More than a dozen years after his death, Gregory Peck still looms large over Hollywood's Golden Age and beyond, starring in a variety of superior motion pictures that span drama, comedy, westerns, war films, biopics, Biblical epics, even horror movies. His distinguished credits, amassed over five decades, include such classics as 'Spellbound,' 'Duel in the Sun,' 'Gentlemen's Agreement,' 'Twelve O'Clock High,' 'Roman Holiday,' 'Moby Dick,' and 'The Guns of Navarone,' to name but a very few. Handsome, strong, forthright, and noble on screen, Peck sent hearts aflutter, but backed up his good looks with a hefty amount of talent, earning five Academy Award nominations for Best Actor and winning one Oscar for his most identifiable and enduring role, the soft-spoken, trail-blazing attorney, Atticus Finch, in 'To Kill a Mockingbird.'

Peck would have turned 100 this year, and Universal, the studio that released many of his films in the 1960s, marks the occasion with the 'Gregory Peck Centennial Collection.' Now I'm all for honoring the iconic stars of bygone eras and celebrating their enduring work, but unfortunately in this case, what should be a comprehensive, reverential tribute is nothing more than a strategic marketing ploy. When I hear the word "collection," I envision a five- or six-title box set that provides viewers with a retrospective of important films that define an actor's wide-ranging contribution to his craft. But there aren't six films here, there aren't five, there aren't even four. Only two movies, both of which have been previously released on Blu-ray, make up this paltry "collection." And that's a real shame.

While I realize rights issues prohibit this set from including non-Universal pictures, there's still a rich list of Peck product at the studio from which to draw. Where's 'Arabesque'? Or 'Mirage'? Or 'Captain Newman, M.D.'? Sure, the bonus packet of six collectible Peck postcards is a nice touch, but I'd gladly trade it for more films! Adding insult to injury, one of the included movies, the essential 'To Kill a Mockingbird' (which should rightfully anchor any definitive Peck retrospective) has already received a glorious digibook treatment from Universal back in 2012. (Currently pulled from circulation - most likely to bolster the success of this release - it's well worth tracking down on eBay.) For a complete review of that timeless classic, click here.

The other film included in the 'Gregory Peck Centennial Collection' is the original 1962 version of 'Cape Fear,' a tense, provocative thriller that Peck hands to co-star Robert Mitchum on a silver platter. Peck plays the upstanding hero, but Mitchum's menacing Max Cady is the far showier role, and Mitchum fully embraces it, embodying the vengeful redneck rapist who ruthlessly terrorizes the Bowden family after spending eight years in prison. Sam Bowden (Peck), who witnessed Cady violently assault a woman, testified against him at his trial, and ever since Cady has been plotting his revenge. But rather than targeting Sam personally, Cady takes a dirtier, more insidious route, quietly and methodically stalking Sam's wife Peggy (Polly Bergen) and especially his teen-age daughter Nancy (Lori Martin), to whom Cady takes a lascivious shine. Sam enlists help from the police and private detective Charles Sievers (Telly Savalas) to combat Max, but as the psychological war begins to take a toll on his family, Sam realizes he must take matters into his own hands to protect those he loves and vanquish his filthy, unhinged foe. As Sievers says, "A type like [Cady] is an animal, so you gotta fight him like an animal." Sam heeds the advice, which leads to a memorable mano a mano showdown.

Taking a leaf from Alfred Hitchcock's 'Psycho,' director J. Lee Thompson adopts a gritty, realistic tone that heightens both suspense and the impact of the disturbing subject matter. Thompson sprinkles his film with more than a few Hitchcock touches and even employs Hitch's favorite composer, Bernard Herrmann, to supply the creepy, string-laden score. Martin Balsam is also in the cast as a police chief, and if you look closely, you'll recognize the seedy hotel where Cady takes a slinky hook-up (Barrie Chase) as the home of Norman Bates and his long-dead mother.

Back in the early 1960s, 'Cape Fear' was hot stuff. Though on the surface it resembles other family-in-jeopardy yarns like 'The Desperate Hours,' the sensational subject matter places it in another realm. Child sexual abuse was a taboo topic at the time, and the censors tried to quash any direct references to it, but Mitchum's raw, frightening performance transmits the message loud and clear. Some scenes are still uncomfortable to watch today, but the repulsion they engender significantly ratchets up tension. Whether played by Mitchum or Robert De Niro in Martin Scorsese's excellent remake, Max Cady remains one of cinema's creepiest villains, and both men do him justice.

Peck's character exhibits striking similarities to Atticus Finch. (Interestingly, the actor would start shooting 'To Kill a Mockingbird' in short order following the completion of 'Cape Fear.') Both are soft-spoken Southern lawyers with a strong moral center and a firm yet gentle personality, and both are devoted fathers who cherish their daughters. The major difference is Atticus combats an undercurrent of evil in his community, while Sam fights a more overt threat. Peck tackles both roles with customary fervor, but Sam is far less complex, and for the good of 'Cape Fear,' he wisely cedes focus to Mitchum.

Which is why 'Cape Fear' seems like an odd choice for a celebratory Peck collection. The film, despite some over-the-top melodrama and a couple of clichés, is a quality thriller that brims with atmosphere, shock value, and an agonizing sense of dread. But it's Mitchum's film, not Peck's. I know the folks at Universal don't really care, but they should. I understand a couple of re-released titles are often necessary to flesh out a collection (Fox did that with its seven-disc Marilyn Monroe set), but it's disingenuous to rely on them to comprise the collection. Instead, give us a real sampling of an actor's contribution to film. Shows us why he matters. The 'Gregory Peck Centennial Collection' whets our appetite for more, but leaves us woefully hungry and unsatisfied. 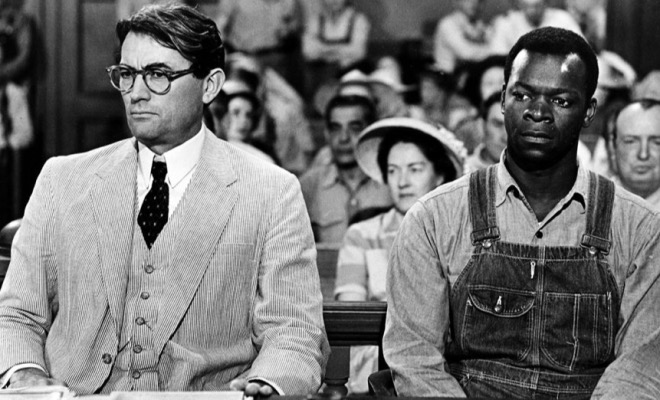 The 'Gregory Peck Centennial Collection' arrives on Blu-ray packaged in a standard case inside a sleeve with raised gold lettering. A "Universal Archive" pouch that includes "A Special Note from Gregory's Daughter, Filmmaker Cecilia Peck," as well as four black-and-white 5"-x-6-1/4" production stills and two color reproductions of the poster art for both films is tucked inside the sleeve. Inside the front cover of the Blu-ray case is a leaflet that contains codes to access the Digital HD with Ultraviolet copies for both 'To Kill a Mockingbird' and 'Cape Fear.' Video codec is 1080p/AVC MPEG-4 and default audio is DTS-HD Master Audio 5.1 for 'To Kill a Mockingbird' and DTS-HD Master Audio 2.0 mono for 'Cape Fear.' Once the discs are inserted into the player, the full-motion menus with music immediately pop up; no previews or promos precede them.

For a complete review of the video quality of 'To Kill a Mockingbird,' click here.

Film noir touches abound in 'Cape Fear,' and the 1080p/AVC MPEG-4 transfer showcases them with aplomb. Superior clarity and contrast complement Samuel Leavitt's shadowy photography, and faint grain adds a welcome touch of grit to the tense narrative while preserving the film-like feel. Black levels are appropriately lush, whites are bright but resist blooming, and a varied gray scale nicely handles all the shades in between. Other pluses include excellent shadow delineation, which keeps the image clear during the heated, swampy climax; easily discernible background elements; rock-solid patterns; and razor sharp close-ups that superbly highlight facial details. Though a few errant marks dot the print, no crush or noise creep into the picture. Much like 'Psycho,' 'Cape Fear' is a low-budget film, but this first-class transfer goes a long way toward making it look like a million bucks.

Video Rating for both films: 4-1/2 stars

For a complete review of the audio quality of 'To Kill a Mockingbird,' click here.

It's too bad 'Cape Fear' doesn't come equipped with a 5.1 surround track, because the film brims with audio atmosphere, but the DTS-HD Master Audio 2.0 mono track handles all the nuances and bombast extremely well. Subtleties abound, and all the footsteps, chirping crickets, creaky doors, and lapping water is crisp and distinct. Excellent fidelity and tonal depth enhance the impact of Bernard Herrmann's melodramatic score, and a wide dynamic scale embraces all its highs and lows without a hint of distortion. A few bits of dialogue are difficult to discern, but most of the interplay between the actors is clear and comprehendible, and no age-related defects like hiss, pops, and crackles intrude. This is a top-notch track that really amps up the tension of this engrossing thriller.

Audio Rating for both films: 4 stars

All of the supplements from the individual releases of both movies are included in this special centennial release. For a complete review of the 'To Kill a Mockingbird' extras, click here.

Supplements Rating for 'To Kill a Mockingbird' - 4 stars

Comprised of only two previously released discs, the Gregory Peck Centennial Collection isn't much of a collection, nor is it a worthy tribute to the actor on his 100th birthday. And yet both 'Cape Fear' and especially 'To Kill a Mockingbird' are classic films that showcase the actor in two different yet similar roles. While more Peck films new to Blu-ray would have enhanced the appeal of this set (how about 'Captain Newman, M.D.,' 'Arabesque,' and 'Mirage'?), the inclusion of collectible postcards and an attractive price point make it a worthwhile purchase if you don't already own either film. (Serious film aficionados already should have picked up the far superior 50th anniversary digibook edition of 'To Kill a Mockingbird.') Excellent video and audio transfers and a slew of supplements distinguish both discs, but this recycled collection is a disappointment and strictly for Peck completists.

Sale Price 39.99
Buy Now
3rd Party 17.78
In Stock.
See what people are saying about this story or others
See Comments in Forum
Previous Next
Pre-Orders
Tomorrow's latest releases