When a reclusive, enigmatic millionaire dies suddenly on the Riviera, his press agent begins to investigate his employer's shady past.

"Did he say anything about me?"

If something doesn't catch on as a movie or a TV series and bombs out, there seems to be this mentality of "try, try, and try again and if that doesn't work, do it all over again." If a movie doesn't ignite the box office or make for a particularly interesting hour's worth of entertainment on television, production companies like to circle around and give material a new venue to see if that doesn't draw an audience. Today it's very commonplace to see a movie become a TV series or vice versa, but in 1956 it was incredibly new to see a TV series move to the big screen with Sheldon Reynolds' 'Foreign Intrigue.'

Being a press agent for one of the world's richest men and living in exotic locations on this man's dime makes for a pretty leisurely life. Dave Bishop (Robert Mitchum) is the guy that gets to lead just such a lifestyle. He drives the boss' exotic cars, flirts a little with the boss' beautiful wife Dominique (Geneviéve Page), all the while he draws a handsome salary for doing what amounts to very little. If this at all seems a bit out of the norm, that's because this entire arrangement is entirely abnormal. The man Dave works for is the multimillionaire Victor Danemore and Dave is entirely responsible for the man's public face, persona, and he's even responsible for creating a fictitious life history for the reclusive man. Even Victor's wife Dominique is a financial arrangement to give Victor a sense of respectability. But when Victor suddenly dies from a heart attack, strange characters start coming out of the woodwork.

Before the man is even six feet underground, shady figures appear one by one asking Dave if Victor said anything the moment he died - specifically anything about them. When one man says something like that, that's something, but when a half dozen men have all asked the same cryptic question, Dave's nerves start to stand on end. Just who was the man living behind the name Victor Danemore? Where did he get his money? Who are these people that all know Victor and why would he have anything to say about them?

With an inquisitive mind that can't be satiated with a simple payoff from the man's will, Dave digs further into the shady past of the man he helped create. When a lawyer from Sweden calls saying he has a mysterious document that should be released depending on whether or not Victor was murdered, Dave sets out to learn the truth, even if that means exposing himself to dangerous people who would do anything to keep their identities a secret. Theses are the types of people who would even murder a pesky press agent who asks too many questions. 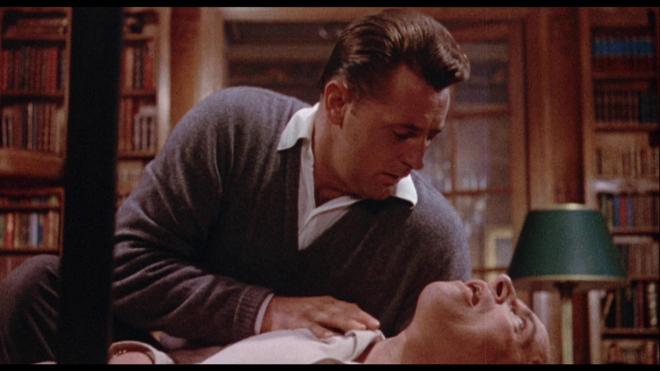 What may have worked well for four seasons as a television show doesn't always translate to the big screen. 'Foreign Intrigue' is one of those long-form plots that feels like it needs to take its time to unfold as a small turn of a phrase or part of a burned letter would provide the impetus for the show to keep coming back week after week. As a movie with only an hour and forty minutes run time, it doesn't quite work out. Writer and Director Sheldon Reynolds tries his best to keep the material working and intriguing as a thriller, but it just doesn't translate in the short form. As a film 'Foreign Intrigue' feels too much like a lesser combination of Hitchcock's 'Foreign Correspondent' and Fritz Lang's 'Ministry of Fear.' The idea is there, but the mechanics are entirely too clunky. Robert Mitchum makes for a compelling leading man to follow, but he just doesn't have anywhere very interesting to go.

When you have ten or twenty episodes of a show, it's okay to have a character reveal that turns that character onto their head. Where they may have once been an ally to the hero, they could now be the villain. When that happens in the movie form of 'Foreign Intrigue' it's entirely too sudden for how little time we've had to spend with the character and it happens entirely too early in the film, so by the time this treachery is revealed to the hero at the end, it's no longer a surprise. While 'Foreign Intrigue' most certainly falls into the international spy subsection of the thriller genre, it's also largely a detective style noir film with a central character who is in over his head as he seeks to learn a truth. There are bad guys with guns and there are beautiful women with weapons of their own to ensnare our hero - only this film just doesn't move in an interesting direction. It felt like the fifth season for a television show crunched down into an hour and a half movie. I came away from this film feeling like I was missing a lot of relevant information and then what I got was provided out of convenience rather than necessity. Long before the final act I was well ahead of this film. This isn't because I'd seen many thrillers of a similar nature but because 'Foreign Intrigue' shows all of its cards before the second act is over and when the big reveal happens at the end you knew the movie was bluffing the entire time.

'Foreign Intrigue' arrives on Blu-ray from Kino Lorber as part of their Studio Classic's line. Printed on a Region A locked BD25 disc that comes housed in a standard case. The disc opens directly to the static main menu.

60 years has brought a lot of wear and tear to 'Foreign Intrigue' and its 1.85:1 1080p Blu-ray transfer. I'll start with the positive notes before I dig into the trouble spots. For starters, film grain is nicely preserved and is never very over-powering, even during the film's darker scenes leading to some pleasing detail levels. Colors can be a bit muted in places, but primaries have just enough pop to them and flesh tones can be very life-like. Blacks are fairly strong, even though contrast appears to have been boosted a little making the image appear a bit flat at times. The big issues bringing down my score for this transfers is the ever constant nicks, scratches, speckling and some tough image jitter. With a movie of this age without any real restoration effort, you expect some of these elements and they're easy enough to forgive, but at these levels it's a bit tough not to be a little hard on the scoring. Granted this is probably the best this movie has looked in decades, but at the same time, it needs a lot of work.

'Foreign Intrigue' comes packed with a nicely resonate DTS-HD MA 2.0 mono track. As a largely dialogue fronted film, you never struggle to hear what people are speaking. There is plenty of sound separation from the dialogue, effects and the music score. For the most part, the audio keeps to the midranges and never really dips to the lower registers or spikes the high notes. On a very strong note this track is free of age-related hiss or pops and considering how quiet the movie is, that's a very good thing considering how quiet much of the film is. It may not be the most impressive mix I've ever heard, but it serves the needs of the film well enough.

Man With The Gun Trailer: (HD 2:24) A classic western starring Mitchum that is due to arrive on Blu-ray in late September. Really good flick if you haven't seen it.

The Wonderful Country Trailer: (HD 2:56) I'd forgotten this one, but it's another solid Mitchum western also due in late September.

Foreign Intrigue Trailer: (HD 1:55) A decent trailer that plays up the thrills and suspense of the film.

'Foreign Intrigue' was a movie I was genuinely looking forward to. I knew the show from a TV history class I'd taken years ago and I dig Robert Mitchum. Sadly the movie just did not go anywhere for me. It was bland from the start, leaves too many questions dangling and the questions it does answer are done in the most convenient and uninspired ways possible - even for a film from 1956. The picture is sadly in pretty rough shape. Even with the decent audio track the lack of any relevant extras is leading me to suggest this as a rental. It's one that only a few will be interested in and even then the rough shape of the print this Blu-ray was mastered from may put those people off from making a purchase.

Sale Price 29.99
Buy Now
3rd Party 28.46
In Stock.
See what people are saying about this story or others
See Comments in Forum
Previous Next
Pre-Orders
Tomorrow's latest releases