The quintessential Jazz Age film, Our Dancing Daughters made Joan Crawford a star and perfectly captures the desires, vices, joys, and tragedies of America's "Flaming Youth" in the late-1920s. A silent film with a synchronized music and effects track, director Harry Beaumont's tale of flappers, jazz babies, playboys, and all-night parties has been given a terrific Blu-ray makeover by Warner Archive. The lack of supplements is disappointing, but excellent video and audio transfers make this not-so-silent classic well worth a purchase. Highly Recommended.

Before Joan Crawford performs a frenetic song-and-dance number in the all-star early talkie The Hollywood Revue, emcee Conrad Nagel introduces the 25-year-old actress as "the personification of youth and beauty and joy and happiness." Crawford coined those attractive qualities a year earlier in the film that made her a star, Our Dancing Daughters, a timely snapshot of both the boisterous Jazz Age and a frivolous, self-centered society that would soon crash and burn with the onset of the Great Depression. Populated by champagne-swilling jazz babies and rich playboys, this breezy, entertaining silent film tempers its debauchery with a sober message about the dangers of free love, alcohol, and greed, yet try as it might, the heavy-handed moralizing can't eclipse the magnetic Crawford, who boldly stakes her claim to movie stardom.

She made quite the impression on writer F. Scott Fitzgerald, too. Our Dancing Daughters, which often feels like it could have been adapted from one of the esteemed author's incisive short stories about the Roaring '20s, inspired him to make the following observation: "Joan Crawford is doubtless the best example of the flapper, the girl you see in smart night clubs, gowned to the apex of sophistication, toying iced glasses with a remote, faintly bitter expression, dancing deliciously, laughing a great deal, with wide, hurt eyes." Though most moviegoers remember Crawford as either a tough broad in shoulder pads who fights for survival in a man's world (Mildred Pierce), a social-climbing working girl who uses sex to get ahead (Grand Hotel), or a conniving, castrating bitch (The Women), she began her career playing the ingénue, and makes quite a fetching one here. 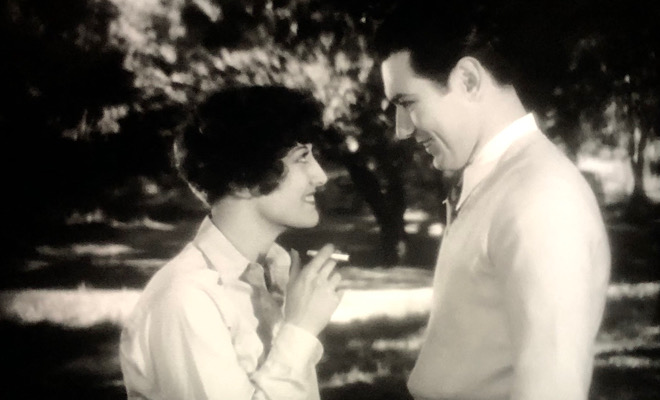 Crawford portrays "that wild Diana Medford," or as she calls herself "Diana the Dangerous," a vivacious, oh-so-wealthy party girl who dances till dawn, imbibes cocktails with abandon, and ceaselessly flirts with the opposite sex. Though she relishes her raucous, rebellious reputation, Diana quietly adheres to a lofty moral code, and when she lays her saucer eyes on former college football star Ben Blaine (John Mack Brown), who's also the heir to a substantial fortune, it's love at first sight. Ben falls for Diana, too, but worries her exuberance and free spirit either hides a shady past or might someday lead her astray. Such doubts make him easy prey for the wily Ann (Anita Page), a brazen gold-digger who adopts a meek, virginal facade to trap Ben into marriage.

Diana loses Ben to Ann, but doesn't compromise her principles. Her best friend Beatrice (Dorothy Sebastian) did just that with a previous boyfriend, and despite confessing her "sin" to her fiancé (Nils Asther), he constantly accuses her of cheating. As the three women deal with the vagaries of romance, their attitudes and outlooks determine their respective fates.

Our Dancing Daughters follows the familiar narrative blueprint drawn by the 1925 drama Sally, Irene and Mary, the film that put Crawford on the cinematic map. The format, which chronicles the trials and triumphs of three very different women, was still fairly fresh when Our Dancing Daughters premiered in 1928, but proved so popular it spawned countless copycat movies over the next few decades, including Three on a Match, Ziegfeld Girl, A Letter to Three Wives, Three Coins in the Fountain, How to Marry a Millionaire, and The Best of Everything. (Woody Allen even recycled the premise in 1986's Hannah and Her Sisters.) Not surprisingly, MGM capitalized on Our Dancing Daughters's monster success by producing a pair of follow-up movies, but neither 1929's Our Modern Maidens (also a silent), which starred Crawford and Page, nor 1930's Our Blushing Brides, which reunited the trio of Crawford, Page, and Sebastian, rival the original. 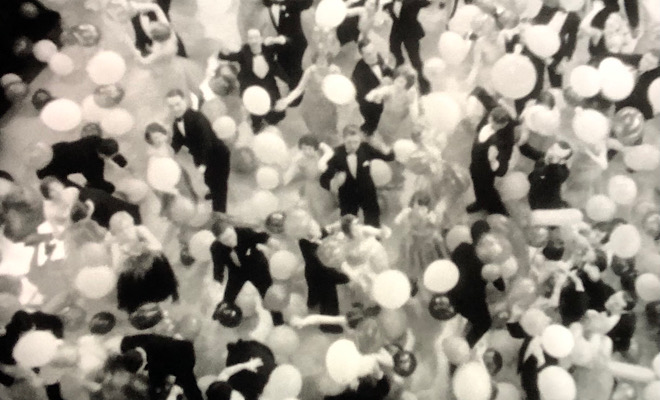 Harry Beaumont's spirited direction - an overhead shot of hundreds of balloons descending upon a sea of feverish partygoers is arguably the movie's most famous shot - and Cedric Gibbons' lavish Art Deco sets bolster the trite, predictable story that somehow earned an Oscar nomination for writer Josephine Lovett. Some of the title cards provoke titters (after Crawford kisses Brown for the first time, she quips, "What a service station you turned out to be!"), but if you're a Crawford fan you can almost hear her distinctive voice reciting the lines, especially those that drip with venom.

Though still an inexperienced actress, Crawford instinctively knew how to use the camera to show off her assets, and she rivets our attention with seemingly little effort. She's also an accomplished dancer. Crawford began her career as a chorus girl and won several Charleston competitions at Hollywood nightclubs during her early years as an MGM contract player. (She's also the answer to the trivia question, "Who was Fred Astaire's first on-screen dance partner?") Though not exactly light on her feet, Crawford makes up in verve what she lacks in grace. 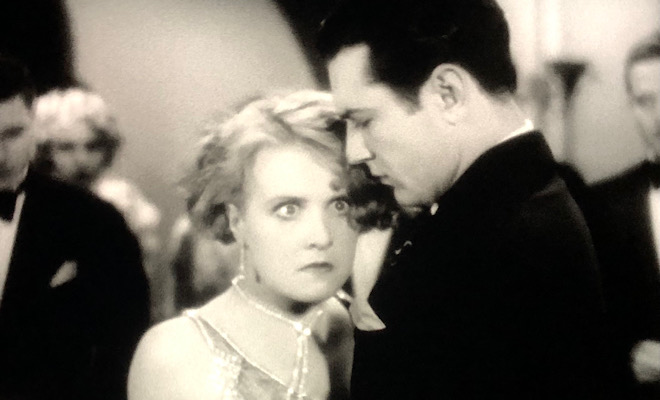 Page tears up the screen with a wildly histrionic portrayal of the wanton, materialistic, and often drunk Ann, while Sebastian tugs the heartstrings as the tainted, insecure Beatrice. Despite their best efforts, neither actress can compete with Crawford, which is why she endures and they don't. By cleverly combining sass, confidence, and joie de vivre with warmth, propriety, and a dash of vulnerability, Crawford grabbed the attention of contemporary audiences and through talent, savvy, and sheer will held it for the next 40-plus years. In the fickle realm of pop culture and in an age- and beauty-obsessed industry, that's no small feat. Our Dancing Daughters launched Crawford like a rocket, and though this portrait of flaming youth is as fizzy and heady as the free-flowing bubbly on screen, it's memorable mostly because of her participation. 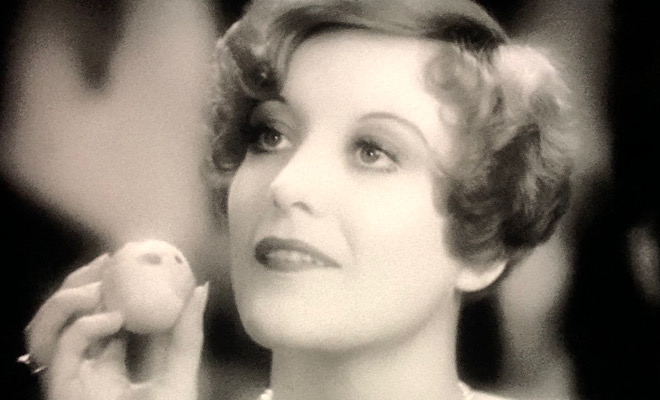 Our Dancing Daughters arrives on Blu-ray packaged in a standard case. Video codec is 1080p/AVC MPEG-4 and audio is DTS-HD Master Audio 2.0 mono. Once the disc is inserted into the player, the static menu without music immediately pops up; no previews or promos precede it.

Another stellar remastering from the best surviving elements yields a wondrous 1080p/AVC MPEG-4 transfer that makes Our Dancing Daughters feel as kinetic as it surely did when first released in 1928. Maybe even more so. Grain is noticeable but never oppressive, resulting in a beautiful film-like image that exudes a seductive nostalgic feel. A slight softness persists throughout, but the excellent clarity and contrast eclipse it. Rich blacks, bright, stable whites, and a pleasing grayscale produce a detailed picture that brims with depth and faithfully honors George Barnes' Oscar-nominated cinematography. 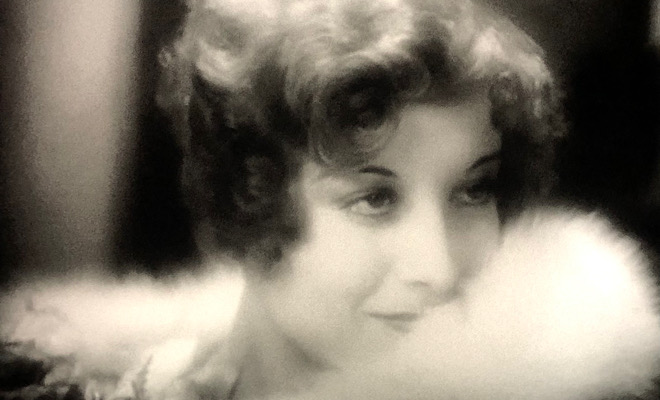 The ornate Art Deco sets designed by Cedric Gibbons and myriad textures of the frilly costumes are well rendered, shadow delineation is quite good, and the close-ups of Crawford (especially those showcasing her watery eyes), Sebastian, and Page are glamorously lush. A process shot superimposing scenes of Diana and Ben's romance on one of Ben's ties is sharp and seamless, and though a few missing frames cause a slight disruption to the film's flow, no nicks, marks, dirt, or scratches mar the pristine source material. When treated and restored with care, silent films can look magnificent on Blu-ray and Our Dancing Daughters is a perfect example. Hopefully, Warner Archive has more silent gems in the pipeline, especially those starring Greta Garbo, John Gilbert, and Lon Chaney.

A silent film with audio may sound like an oxymoron, but during Hollywood's transition from silent to talking pictures, MGM bridged the gap by releasing a select number of movies with a synchronized music and sound effects track. Our Dancing Daughters was one of them, and the DTS-HD Master Audio 2.0 mono track allows viewers to experience the film just as contemporary audiences did in 1928, albeit without all the annoying hiss, pops, and crackle. You can tell almost instantly it's an authentic track; though magnificently restored, there's an antiquated feel to the audio that's appropriate for a 95-year-old movie. Dynamic range is somewhat limited (at times, the music score flirts ever so slightly with distortion), but it's wide enough to produce pure, full-bodied sound. The vocals on the few songs that occasionally play over the on-screen action are distinct, the lyrics and a handful of off-screen lines of dialogue are easy to comprehend, and isolated sonic accents like ringing telephones, popping balloons, galloping horse hooves, door knocks, and a bouncing ping-pong ball are crisp. Atmospherics like crowd noise at the boisterous parties and the ebb and flow of the tide at the seashore nicely shade the drama as well. The wizards at Warner Archive have once again done wonders with a vintage track and their excellent work greatly enhances the entertainment value of this silent-era classic.

Sadly, there are no disc supplements. A wonderful - and quite appropriate - bonus would have been Crawford's performance of "Got a Feelin' for You," which includes a scorching-hot Charleston routine, from the 1929 talkie The Hollywood Revue (a portion of the number can be seen in the classic MGM musicals documentary That's Entertainment!), but no such luck.

With a gorgeous remastered transfer and lossless music and effects track, Our Dancing Daughters instantly becomes one of the best Blu-ray renderings of a silent film. The Jazz Age tale of a trio of party girls and the men they love, toy with, and marry lofted Joan Crawford onto Hollywood's A-List and remains a vivacious, entertaining snapshot of a frenetic, amoral era. Crawford fans have been waiting a long time for this one and Warner Archive has done it proud. Highly Recommended.