Another welcome release to celebrate the Judy Garland centennial, Ziegfeld Girl charts the ups and downs of three showgirls who are plucked from obscurity by the eponymous impresario. James Stewart, Hedy Lamarr, and Lana Turner join Garland in this opulent musical extravaganza that’s the epitome of MGM gloss. A dazzling remastered transfer that sparkles as much as the sequins on the outlandish costumes distinguishes Warner Archive’s Blu-ray presentation, along with robust audio and all the supplements from the 2004 DVD. Recommended.

Throughout its history, Hollywood has thrived on recycling successful formulas, and during its Golden Age one of its favorites chronicled the triumphs and tragedies of a trio of beautiful women. Classics like Sally, Irene and Mary, Our Dancing Daughters, and Three on a Match faithfully follow the blueprint, and Ziegfeld Girl does, too. When legendary showman Florenz Ziegfeld plucks a pair of glamor girls and a powerhouse vocalist from obscurity and grooms them into Broadway sensations, the audience immediately wonders who will become the superstar, who will give it all up for love, and who will crash and burn. And with Judy Garland, Hedy Lamarr, and Lana Turner in the lead roles, it's easy to connect the dots.

So what if the plot is predictable? It's watching it all play out that's so much fun, and Ziegfeld Girl obliges with equal parts melodrama, message, and mammoth musical numbers. The screenplay continually presses the point that the Ziegfeld Follies is life in microcosm, filled with dizzying heights and devastating heartache, but director Robert Z. Leonard's film never achieves that level of depth. After all, it's only a musical, but Ziegfeld Girl does its darnedest to knock our socks off with both drama, romance, and spectacle. 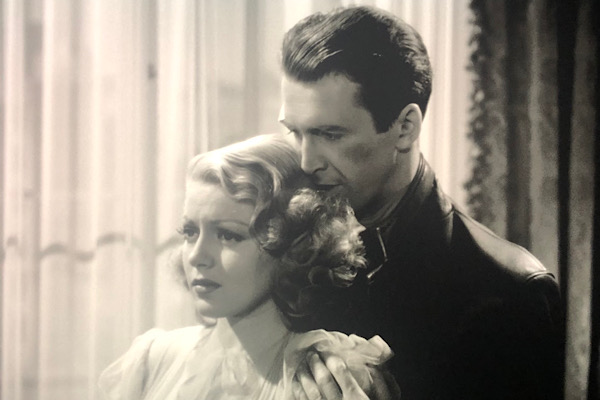 Actor William Powell portrayed Ziegfeld in MGM's Oscar-winning The Great Ziegfeld in 1936, but this time around the studio employed the clever gimmick of making the larger-than-life producer an unseen presence, looming over the action but never appearing on screen. His minions (Edward Everett Horton and Paul Kelly) do his bidding and sign three promising showgirls to join the Follies: Susan Gallagher (Garland), who tours second-rate vaudeville houses with her overbearing but kind-hearted father (Charles Winninger); Sandra Kolter (Lamarr), the statuesque wife of Franz Kolter (Philip Dorn), a struggling classical violinist; and Sheila Regan (Turner), a Brooklyn-born elevator operator whose grandiose dreams and expensive taste threaten her relationship with her truck-driver boyfriend Gil Young (James Stewart).

The teenage Susan works hard to earn her big break, but success comes easily to Sandra and Sheila, and their respective men feel belittled and emasculated by the girls' meteoric rise and stratospheric salaries. In the days before America entered World War II, society frowned on working women, especially those who raked in more dough than their mates, and Franz and Gil deal with their shame and humiliation in different ways. The proud Franz splits up with Sandra, who finds comfort in the arms of singing star Frank Merton (Tony Martin), while Gil joins a band of bootleggers to make an easy buck. That leaves Sheila free to be seduced by millionaire playboy Geoffrey Collis (Ian Hunter), but frittering away her Ziegfeld fortune on furs, shoes, and a fancy Park Avenue apartment isn't Sheila's only vice. She also likes liquor, and mixing whiskey with her headstrong attitude and sizable ego makes for one lethal cocktail. 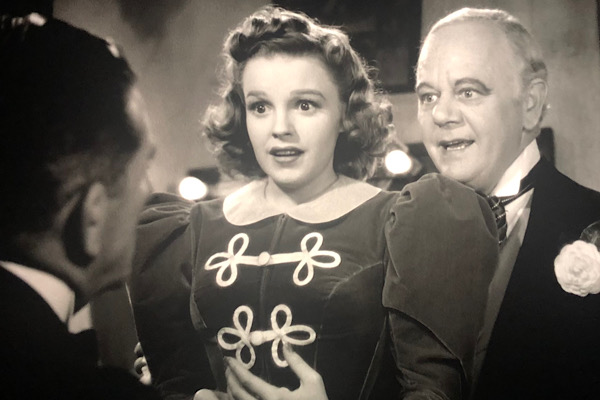 Ziegfeld Girl piles on more drama than most musicals, but its two blockbuster production numbers (conceived and directed by Busby Berkeley) evoke the glamor, extravagance, and sheer excess of the Follies. “You Stepped Out of A Dream” would become an enduring standard and epitomizes Ziegfeld's vision of a showgirl. (The outlandish Adrian-designed costumes must be seen to be believed.) Not to be outdone, Garland, who sings the beautiful ballad “I'm Always Chasing Rainbows” early in the film (see clip below), puts over the calypso-infused “Minnie from Trinidad” with her tongue firmly in cheek and somehow makes the idiotic song and its overdone production infectious. Unfortunately, the big finale, “You've Never Looked So Beautiful Before,” is a big letdown, as clips from The Great Ziegfeld are shamelessly inserted into the number, which climaxes with an uncomfortable-looking Garland (in blonde ringlets, no less!) perched atop MGM's famous revolving wedding cake staircase.

Garland comes across well in an uninteresting role (though some of her emotional line readings sound eerily like Dorothy in The Wizard of Oz), but Ziegfeld Girl is really Lana Turner's picture, and the 20-year-old actress sinks her teeth into her first juicy part. On a couple of isolated occasions, Turner goes over the edge (just watch her "count her blessings"), but generally files a mature, dimensional performance that catapulted her to the top.

Although Stewart had recently won a Best Actor Oscar for The Philadelphia Story, he's saddled here with a second-rate role and a third-rate New York accent. He and Turner possess potent chemistry, yet Stewart seems to realize early on he's up to his ears in sequins and wisely chooses not to compete with his formidable leading ladies. The first Hollywood star to volunteer for war service (nine months before Pearl Harbor), Stewart enlisted in the Air Force shortly after completing Ziegfeld Girl, which also completed his MGM contract. Whether the studio's shabby treatment of him influenced his decision remains a mystery, but Stewart wouldn't make another movie until It’s a Wonderful Life five years later. 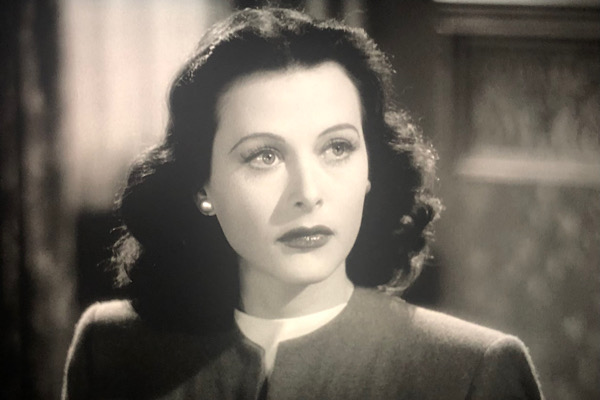 At a hefty 132 minutes, Ziegfeld Girl drags at times, but when it starts to spit and sputter, MGM's stock company invariably perks it up. The deliciously wry Eve Arden as an aging, jaded showgirl supplies some sage wisecracks, a teenage Jackie Cooper (as Sheila's kid brother) makes goo-goo eyes at Garland over an ice cream soda, and a young but tough Dan Dailey enjoys some rapid-fire repartee with Turner. The great films of old Hollywood were often built on such seemingly minor contributions, and although Ziegfeld Girl is far from a great film, it reaps big benefits from its polished supporting cast.

Dated? Sure. Creaky? A little. Yet Ziegfeld Girl deftly juggles its dramatic storyline and sumptuous musical numbers, keeping viewers entertained and involved throughout. Like the Follies itself, Ziegfeld Girl may be uneven, but it still delivers. 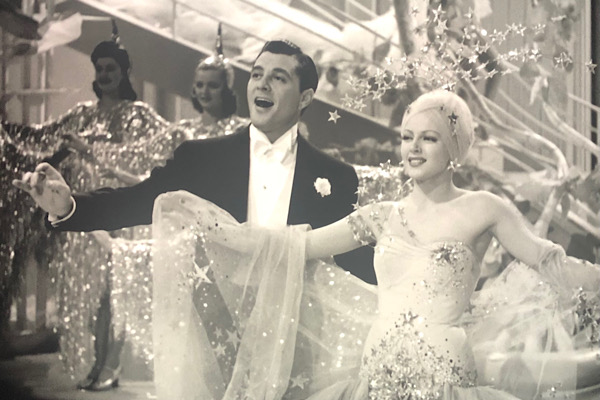 Vital Disc Stats: The Blu-ray
Ziegfeld Girl arrives on Blu-ray packaged in a standard case. Video codec is 1080p/AVC MPEG-4 and audio is DTS-HD Master Audio 2.0 mono. Once the disc is inserted into the player, the static menu with music immediately pops up; no previews or promos precede it.

Warner Archive upgrades another Garland classic with an appropriately glamorous 1080p/AVC MPEG-4 transfer struck from a new 4K scan of the best preservation elements. Print damage and a lack of vibrancy marred the DVD, but that’s all been rectified here. The spotless source sparkles with excellent clarity and contrast, and a natural grain structure preserves the feel of celluloid. All the details, textures, and adornments of the often outlandish Adrian-designed costumes are wonderfully sharp, as is the decor in Sheila’s over-the-top Park Avenue apartment. The image is so crisp, you can easily discern Garland’s double in the closing moments of the “Minnie from Trinidad” number, as well as when actress Virginia Bruce takes Garland’s place atop the revolving staircase cake when a clip from The Great Ziegfeld is awkwardly inserted into the film for its final shot. Lamarr's raven black hair is well rendered, whites occasionally run a tad hot, and well-modulated grays enhance depth. Solid shadow delineation keeps crush at bay and crystalline close-ups allow us to drink in the copious amount of breathtaking beauty on display. Without question, this transfer is a big improvement over the previous DVD, so if you’re a Ziegfeld Girl fan, you’ll definitely want to upgrade.

Excellent fidelity and tonal depth distinguish the DTS-HD Master Audio 2.0 mono track that really comes alive during the musical numbers. Though a bit of faint surface noise can be heard during quiet moments, the hiss, pops, and crackle that plagued the lossy DVD track have been erased. A wide dynamic scale handles all the highs and lows of Herbert Stothart’s lush orchestrations, Martin’s mellifluous baritone, and Garland’s powerhouse vocals without a hint of distortion, and all the dialogue is well prioritized and easy to comprehend. Ziegfeld Girl may be 81 years old, but it sounds amazingly spry here.

All the extras from the 2004 DVD, with the exception of trailers for The Great Ziegfeld and Ziegfeld Follies, have been ported over to this Blu-ray release, albeit with a couple of slight alterations (see below).

Few would rank Ziegfeld Girl as one of Hollywood's greatest musicals, but this splashy, dramatic, and tuneful look inside the Follies is more involving and entertaining than its Oscar-winning predecessor. The star-studded cast led by Stewart, Garland, Lamarr, and Turner enlivens the familiar material, and a terrific transfer struck from a 4K scan of the best preservation elements showcases all the MGM opulence. Excellent audio and all the supplements from the 2004 DVD also distinguish Warner Archive’s top-flight presentation of this Golden Age extravaganza. Recommended.