The Best of Everything

Rona Jaffe's best-selling novel comes to life in this witty tale about the personal and professional lives of the men and women in a New York publishing firm. Heading a huge cast is Joan Crawford as a tough-talking editor who can't seem to win at love. There are a few more interesting stories around the office than there are in the manuscripts at Fabian Publishers. Among the principal players: a new secretary (Hope Lange) who quickly gets her boss's (Crawford) job and romances a handsome editor (Stephen Boyd); a Colorado secretary (Diane Baker) who falls for the wrong man (Robert Evans); and a would be actress (Suzy Parker) who's jilted by a two-timing director (Louis Jourdan). Slick and glossy, The Best Of Everything is a panorama of office politics before women's liberation.

Take 'Mad Men' and mash it up with some 'Devil Wears Prada' and you've got 'The Best of Everything,' a glossy, juicy late-1950s soap opera about starry-eyed working girls trying to make it in the Big Apple's corporate jungle. Though certainly dated from a sociological standpoint, this slick adaptation of Rona Jaffe's bestselling novel champions the vigor, mettle, and don't-settle-for-less attitude of ambitious - and, of course, beautiful - young women, while at the same time proving they're no match for the wolves, cads, and arrogant egotists who hold all the cards in a shamelessly chauvinistic world. Learning how to live by a man's rules while still maintaining a modicum of integrity seems to be the sermon Jean Negulesco's guilty-pleasure film preaches, yet the drama also can be viewed as a not-so-silver-linings playbook for how to achieve "the best of everything," which in our current lexicon means "having it all."

Of course, back in those days, having it all meant having a career until a handsome, charming, and financially secure young male swept you off your feet and inspired you to willingly and eagerly give up your job for the proverbial happy ending of marriage, babies, and homemaking. Contemporary women - and especially ardent feminists - will no doubt retch at such a revolting viewpoint and be doubly sickened by how these seemingly intelligent, directed, and principled gals accept sexual harassment without batting an eye and acquiesce to the demands and ideology of attractive men...all while wearing a stunning array of designer outfits that would make Carrie Bradshaw drool. (The film's costumes were Oscar nominated.) But choices were few for women of that era, and though the females depicted in 'The Best of Everything' don't necessarily like the hand they've been dealt, they learn how to play the game as best they can. And as feminism takes two steps forward and one giant leap back over the course of the film, one woman prospers, one weathers the storm, and one crashes and burns over the course of an entertaining, if predictable, two hours.

In addition to following the formula of the time, 'The Best of Everything' faithfully adheres to a well-worn cinematic formula, as it focuses on three attractive young women and the trials and tribulations each must bravely face. (The recipe was first coined back in 1932 with 'Three on a Match,' refined in 1949 with the Oscar-winning 'A Letter to Three Wives,' and flourished in the 1950s with 'How to Marry a Millionaire,' 'Three Coins in the Fountain,' and 'Peyton Place.') There's Caroline Bender (Hope Lange), a smart, pert Radcliffe grad who initially views her stint in the secretarial pool at Fabian Publishing as a temporary pit stop en route to marriage with her college sweetheart, Eddie Harris (Brett Halsey), but an unforeseen development forces her to rethink her path and try to earn the respect of her demanding, Miranda Priestly-like boss, Amanda Farrow (Joan Crawford), a hardened editor who regards her underlings with thinly veiled disdain and treats them like her personal slaves.

Working alongside Caroline are the glamorous Gregg Adams (Suzy Parker), who disinterestedly toils at Fabian while pursuing a theatrical career, and April Morrison (Diane Baker), a naïve girl from the country who first must fend off the advances of lecherous executive editor Fred Shalimar (Brian Aherne) before flinging herself into a misguided relationship with rich playboy Dexter Key (Robert Evans). Gregg appears to have a good head on her shoulders, but falls head-over-heels for dashing Broadway director (and hopeless lothario) David Savage (Louis Jourdan), while Caroline forges a bumpy friendshp with handsome colleague Mike Rice (Stephen Boyd), whose best buddy is a bottle of booze. All of the men are self-centered and self-indulgent, none are likable, and yet the women, so blinded by their relentless desire to lasso a knight in shining armor and become a Stepford wife, can't see past their chiseled features or resist their slathered-on, manipulative charm. At one point, Gregg wistfully opines, "Here's to men! Bless their clean-cut faces and dirty little minds." Yet such a shallow, ignorant attitude spawns a warped view of the world that can only lead to heartache...and worse.

'The Best of Everything' lumbers along at times, but Negulesco's excellent use of New York City locations often kickstarts the film and lends it an authenticity the far-fetched romantic story struggles to attain. As mechanically constructed as some of the pulp novels Fabian publishes, Jaffe's tangled yarn begins as an intelligent exploration of seemingly substantive single women, but later devolves into tawdry melodrama. (It's no wonder 'The Best of Everything' found new life in the early 1970s as a short-lived daytime soap opera.) And yet the slick production values and sincere performances keep us engaged, against our better judgment.

The underrated Lange is especially believable in one of her last good big screen roles, projecting an intoxicating naturalness, unspoiled beauty, and unaffected sweetness that holds the film together. (It's a shame she never became a bigger motion picture star.) Baker, fresh from her debut as older sister Margot in 'The Diary of Anne Frank,' brings plenty of wide-eyed warmth to her portrayal, and though the ravishing Parker may not be much of an actress, she's mesmerizing to watch, especially when jealousy, paranoia, and obsession send her character careening off the rails. (Never has the face of insanity looked so glamorous!) The guys are appropriately hunky, but oh-so-bland and stiff. Jourdan had just come off of 'Gigi' and Boyd's next role would be Messala to Charlton Heston's 'Ben-Hur.' Both movies would win Best Picture Oscars and engage their respective actors far more than 'The Best of Everything,' which would also be Evans' last picture before he transitioned into producing.

But it's Crawford, in her first supporting role since the silent era, who rivets our attention most of all. Though she only has a few brief scenes (and reportedly her best work wound up on the cutting room floor), she makes the most of them, using her charisma to terrific advantage and giving all the ingénues a lesson in poise, presence, and professionalism. Just as Meryl Streep would do almost a half century later, Crawford underplays her tigress editor, whispering her directives instead of barking them and delivering verbal daggers with a deliciously fake smile. She lets her guard down once in private, bellowing the memorable line "You and your rabbit-faced wife can go to hell!", and - just like Streep - brings a surprising vulnerability to a hardened woman who's paid a hefty price for putting her career first.

Despite its faults, 'The Best of Everything' remains an intriguing and enjoyable look back at a time when America teetered on the brink of social revolution and traditional values were about to be upended. Its sudsy plot, so reminiscent of 'Peyton Place' and 'A Summer Place,' strings us along, but its basis in the workplace and real-world milieu lend the film a gravity other interpersonal dramas of the period sorely lack. With apologies to Virginia Slims, working girls have come a long way, baby, since 1959, but 'The Best of Everything' - cringe-inducing moments and all - salutes their roots and helps us appreciate their arduous journey and myriad battle scars. 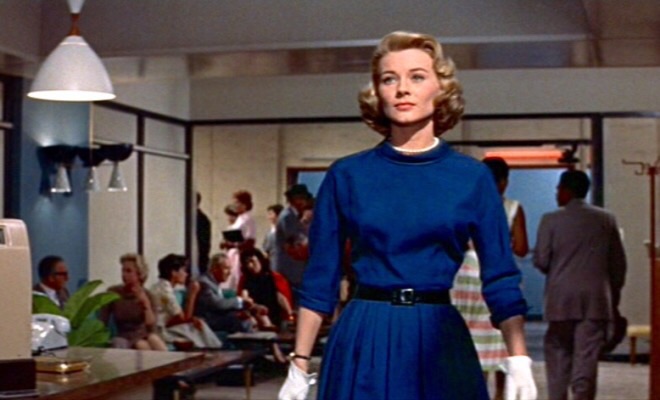 'The Best of Everything' arrives on Blu-ray in a limited to 3,000 edition packaged in a standard case. An eight-page booklet featuring an essay by film historian Julie Kirgo, as well as several color scene shots and a reproduction of the movie's poster art, is tucked inside the front cover. Video codec is 1080p/AVC MPEG-4 and audio is DTS-HD Master Audio 5.1. Once the disc is inserted into the player, the static menu without music immediately pops up; no previews or promos precede it.

A glossy film like 'The Best of Everything' deserves a lush transfer, and Fox complies with a beautifully vibrant, occasionally eye-popping 1080p/AVC MPEG-4 transfer that brings 1959 New York City to brilliant life. Excellent detail, top-notch clarity, and a palpable sense of depth distinguish this stellar effort, which benefits from a natural grain structure that maintains the look and feel of celluloid and a rich color palette that enhances the smart fashions on display. Nary a nick or scratch crops up on the pristine source material, and deep blacks and crisp whites nicely offset the bright colors. Close-ups highlight facial features well, flesh tones appear natural and remain stable, and fine shadow delineation keeps crush at bay. Any digital doctoring escapes notice, and no banding, noise, or artifacts are present. This slick, smooth transfer breathes new life into the film and will surely please fans of this popular 1950s soap opera.

The DTS-HD Master Audio 5.1 track doesn't have a lot of surround presence, but a good amount of richness and depth compensate for the lack of directionality. The clickety-clack rattle of typewriters provides a subtle undertone to the office scenes, and the hustle and bustle of the New York cityscape comes across well in exterior sequences. Dialogue is always clear and easy to comprehend, and Alfred Newman's glorious score (which can be enjoyed without any dramatic hindrances on an isolated audio track) fills the room with ease. Best of all, no age-related imperfections, such as hiss, pops, and crackles, intrude.

A few notable extras round out this Twilight Time release.

Before 'Mad Men' and 'The Devil Wears Prada,' there was 'The Best of Everything,' and though Jean Negulesco's tale of a trio of working girls trying to make it in a male-dominated industry and society can't compete with its edgier successors, it still strikes a chord, despite its soapy plot, outdated mores, and glossy trimmings. Fine performances also buoy the film, which maintains our interest often against our better judgment. Twilight Time's Blu-ray presentation features outstanding video, solid audio, and a couple of interesting supplements. Not recommended for passionate feminists, who might run screaming from the room, but classic movie buffs, Joan Crawford fans, and aficionados of romantic fluff will certainly find this interpersonal drama worth a look.