Film Noir: The Dark Side of Cinema VII (The Boss / Chicago Confidential / The Fearmakers)

The seventh chapter of Kino's film noir series spotlights political skullduggery with a trio of late 1950s movies that tackle issues we still grapple with today. The Boss, The Fearmakers, and Chicago Confidential tie into our current climate, and though they don't fit the traditional noir mold, they contain enough noir accents to merit inclusion in the genre. A couple of remastered transfers (that could still benefit from some clean-up) and two dynamite commentaries distinguish Film Noir: The Dark Side of Cinema VII, which supplies plenty of hard-boiled entertainment. Worth a Look.

One of the joys of Kino's Film Noir: The Dark Side of Cinema series is the exposure it gives to a number of little-known yet fascinating movies that otherwise would be neglected and/or forgotten. Not all of them necessarily deserve a Blu-ray release, but if you're a fan of the genre or just a cinema junkie who enjoys discovering obscure relics, the franchise provides hours of entertainment as it explores a number of provocative themes.

The seventh edition groups together a trio of low-budget, independent films - The Boss, The Fearmakers, and Chicago Confidential - that focus on political corruption. None of them begin like traditional noirs, but as the plots thicken and tensions rise, genre elements begin to appear. Violence plays a big role (they wouldn't be noirs without a little mayhem), but it's the twisted ideologies coursing through these movies - which remain eerily relevant today - that really get under our skin and make us think. 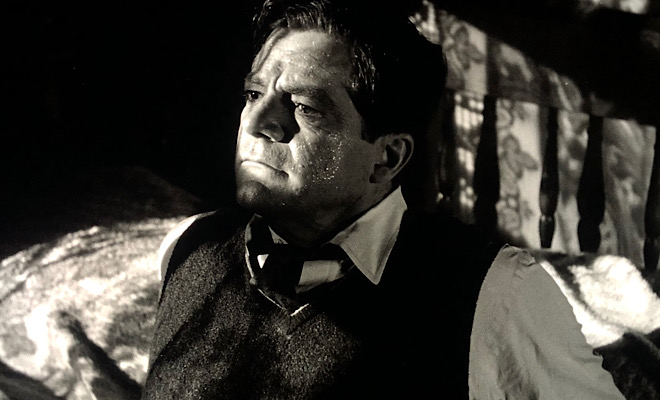 The Fearmakers (1958) is the best movie in the bunch. Briskly directed by Jacques Tourneur (who a decade earlier helmed one of the greatest noirs of all time, Out of the Past), this incisive examination of how pervasive lies can shape political opinions in our society (sound familiar?) stars a square-jawed Dana Andrews as Alan Eaton, a brainwashed Korean War vet who must fight the insidious brainwashing of normal Americans by a nefarious media company. When Alan tries to resume his duties as co-owner of a Washington, DC public relations/polling firm upon his return to the U.S., he discovers his partner sold out his share shortly before he was killed in a car wreck.

The outfit's slick new owner, Jim McGinnis (Dick Foran), and his cohorts (one of whom is played by singer Mel Tormé) plan to skew opinion polls on nuclear war to influence the larger populace, which - according to statistics - tends to blindly adopt the majority view. McGinnis' peace-at-all-costs stance will give Russia the edge in the Cold War by making America look weak, and if McGinnis can promote that propaganda by juggling the polling data and hoodwinking an ignorant public into favoring his agenda, he believes voters will elect officials with the same beliefs. "There are millions of people being lied to, taken for suckers," Alan tells McGinnis. "You're peddling poison to put in their minds."

The bulk of the film, which also touches upon sexual harassment in the workplace, chronicles Alan's efforts to expose McGinnis and prove his partner's death was no accident, and he's aided by McGinnis' pretty assistant, Lorraine Dennis (Marilee Earle). After the rough-and-tumble climax on the steps of the Lincoln Memorial, Alan makes a statement that resonates more strongly today than it did back in 1958: "You can't fool all the people all the time," he says, "but nowadays you don't have to fool all the people, just enough to swing it..." The Fearmakers is an engrossing cautionary tale, but sadly, the warnings it espouses have come back to haunt us. (Rating: 3.5 stars) 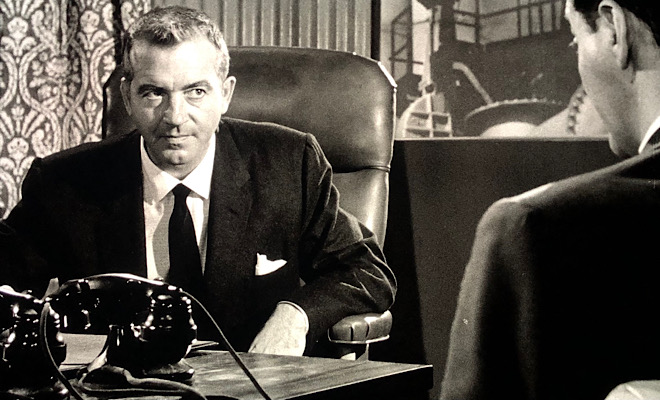 The Boss (1956) stars leading-man-turned-tough-guy John Payne (best remembered as Kris Kringle's defense attorney in the Christmas classic Miracle on 34th Street) in one of his last noir roles. Even though director Byron Haskin's film includes the standard disclaimer that none of the characters bear any resemblance to anyone living or dead, The Boss is a thinly veiled bio of Kansas City political kingpin Tom Pendergast, who ran the city's finely oiled and oh-so-corrupt machine for 15 years before his conviction on tax evasion charges á la Al Capone in 1939. In addition, the bespectacled supporting character Ernie Jackson, played by a pre-McHale's Navy Joe Flynn, is an incarnation of future U.S. president Harry S. Truman, who was loosely associated with Pendergast early in his career.

A standard rise-and-fall tale that doesn't really sink its teeth into the viewer until its final half hour, The Boss features a memorable shootout on the steps of the Kansas City train station that surely influenced an iconic scene in Brian De Palma's The Untouchables three decades later. Haskin, who was nominated for four Oscars in the special effects field and helmed the first filmed version of H.G. Wells' sci-fi classic The War of the Worlds, keeps the story chugging along, but allows Payne, who filed a series of stellar noir portrayals in such films as Kansas City Confidential and 99 River Street, to shamelessly chew the scenery with as much relish as he chews his ever-present cigar. Payne's over-the-top snarling and sourpuss demeanor lend the film's early scenes a cartoonish feel that belies the quality of blacklisted writer Dalton Trumbo's script. (Ben Perry fronted for Trumbo for this picture and 1958's Terror in a Texas Town.) As the cast delivers some of Trumbo's snappy dialogue, it's hard not to envision the writer gleefully typing it out while soaking in his bathtub, where he did much of his work.

Thankfully, Payne calms down as his character ages and the film progresses, but the early histrionic scenes of The Boss leave a sour taste that never really goes away. Though a climactic pursuit in a cement factory that ends on a treacherous catwalk supplies some welcome excitement, The Boss never quite gels like we hope it will, despite its uncompromising depiction of dirty politics. (Rating: 3 stars) 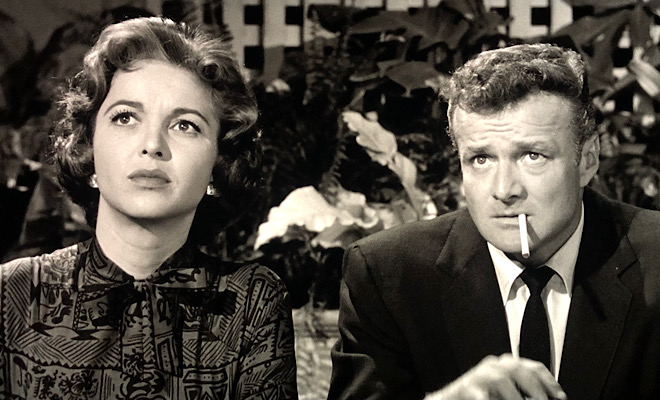 Chicago Confidential (1957) can't hold a candle to Kansas City Confidential, but it's still a zippy little noir with a straightforward plot about racketeers trying to take over a local union and steal from its welfare fund. Two future sitcom stars, Brian Keith (Family Affair) and Beverly Garland (the later seasons of My Three Sons), play the Illinois state attorney trying to shut down the syndicate and the fiancée of the honest union leader (Dick Foran) who's framed for murder. As usual, supporting actor Elisha Cook, Jr. files the movie's most interesting portrayal as a drunken derelict whose insatiable thirst for liquor gets him involved in the mobsters' scheme. Though nothing special, Chicago Confidential is a diverting 75-minute exercise that contains solid performances and some good action scenes. (Rating: 3 stars)

Vital Disc Stats: The Blu-ray
The three films that comprise Film Noir: The Dark Side of Cinema VII arrive on Blu-ray packaged in individual standard cases inside a sturdy box. Video codecs are 1080p/AVC MPEG-4 and audio is DTS-HD Master Audio 2.0 mono. Once the discs are inserted into the player, the static menus with music immediately pop up; no previews or promos precede them.

Both The Boss and The Fearmakers boast brand new 2K masters, but like previous Kino film noir collections, a fair amount of print damage still rears its ugly head. The Boss especially suffers from such eyesores as blotches, scratched frames, speckling, and ragged edges, and is without question the weakest of the three 1080p/AVC MPEG-4 transfers in the set. Despite good clarity and contrast, deep black levels, pleasing grays, and sharp close-ups, image inconsistencies plague The Boss, with varying degrees of grain, softness, and light disrupting the viewing experience throughout. (Video rating for The Boss: 3 stars) 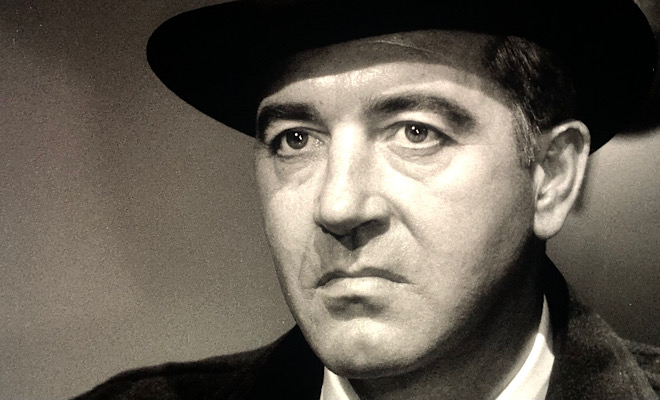 The Fearmakers, which features cinematography by the great Sam Leavitt (who would win an Oscar the following year for The Defiant Ones), looks much better, with only a few soft shots interspersed throughout the whole. Natural grain preserves the film-like feel, while excellent clarity, contrast, and shadow delineation produce a solid picture that's packed with detail and exhibits a fair amount of depth. (In one long shot, you can clearly see Andrews' double taking punches in a fight scene.) Some nicks and marks litter the image throughout, but most are minor and don't distract too much from the story at hand. (Video rating for The Fearmakers: 3.5 stars) 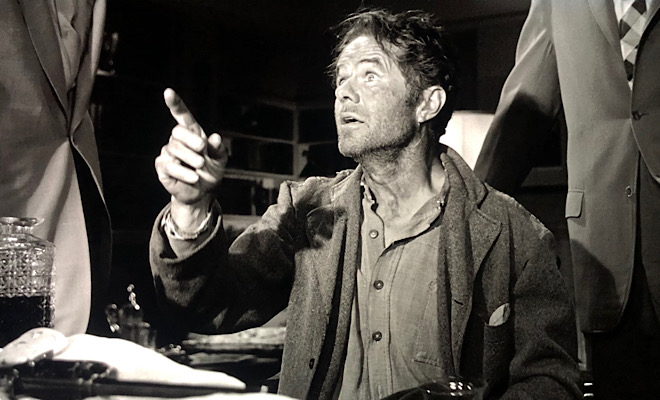 Ironically, Chicago Confidential - the one film in this trio that didn't receive any remastering - looks the best. The picture isn't devoid of damage, but it's quite clean overall and remains consistently clear and vibrant throughout. The filmic image benefits from rich blacks, bright, stable whites, top-notch shadow delineation, and crisp close-ups. (Video rating for Chicago Confidential: 4 stars)

All three films feature DTS-HD Master Audio 2.0 mono tracks. Both The Fearmakers and Chicago Confidential sound quite good; the clear, well-modulated audio renders both subtleties and sonic accents well, and no age-related hiss, pops, or crackle mar either track. Wide dynamic scales handle all the highs and lows of both music scores without any distortion, and all the dialogue is easy to comprehend. (Audio rating for The Fearmakers and Chicago Confidential: 4 stars)

The Boss, on the other hand, could benefit from an audio remaster. Though sonic accents like gunfire and fisticuffs are crisp, some surface noise is noticeable and some of the dialogue sounds hollow, as if it was recorded in the bottom of a well. Otherwise, the track does its job, but it's hard to overlook the imperfections. (Audio rating for The Boss: 3 stars)

A couple of top-notch audio commentaries and some trailers are the only extras offered.

Though the three films in Film Noir: The Dark Side of Cinema VII don't fit the classic noir mold, they possess enough noir elements to be included in the genre. The focus on political corruption certainly strikes a nerve in this day and age and proves how little has changed over the past several decades. The Boss, The Fearmakers, and Chicago Confidential never will be considered classics, but The Boss and especially The Fearmakers are fascinating curios that will certainly pique the interest of politically minded film fans. The transfers range from subpar (The Boss) to very good (The Fearmakers and Chicago Confidential), and extras across the board are slim, although the two included commentaries are excellent. Worth a Look.