While ‘Twin Peaks’ was still a hot property on television, tie-in merchandise such as the previously-reviewed ‘Secret Diary of Laura Palmer‘ did brisk business among fans. When producers wanted to publish a second, similar book, its subject was both obvious and inevitable. For this new entry in my ongoing David Lynch marathon, I’ve pulled my old copy of ‘The Autobiography of F.B.I. Special Agent Dale Cooper: My Life, My Tapes’ from the shelf, dusted it off, and given it another read.

In some ways, ‘Twin Peaks’ turned out to be a family affair. After David Lynch’s daughter Jennifer found success writing the Laura Palmer book, the show’s co-creator Mark Frost enlisted his brother Scott Frost to tackle this one.

In the series, the Agent Cooper character frequently dictates his notes on the murder investigation, his private thoughts and other random asides into a tape recorder. Most of these recordings are addressed to the never-seen “Diane,” who is presumably his secretary (though some fans prefer to believe that he named the tape recorder itself). This quirky character habit made an easy gimmick for the book, which is written as a series of transcriptions of recordings that Cooper made throughout his life. 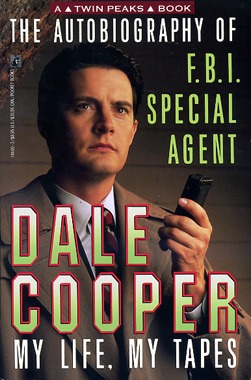 The story picks up at age 13, when young Dale is given his first tape recorder as a gift and begins using it as a personal diary. We learn of his early life as an Eagle Scout and his fascination with solving neighborhood mysteries. As the book skims forward through the years, he talks about his tragic first love, his quest for personal enlightenment, and eventually joining the FBI. In the later sections, the novel draws connections to the TV series when Cooper is partnered with mentor Windom Earle, who would play a critical role in the show’s second season. Backstory that Cooper talks about in the show is fleshed out in more detail here. He also meets up with other fan-favorite characters including Albert Rosenfield, DEA agent Dennis Bryson and Regional Bureau Chief Gordon Cole. The book ends with Cooper being assigned the Laura Palmer case and heading for Twin Peaks.

Whereas the Laura Palmer diary focused on the horror and tragedy of that character’s life, this book explores more of the series’ famous offbeat humor. Dale’s personal observations and outlook on life are often very amusing, and the novel has some funny chapters detailing, for example, his attempt to go without sleep for several days or his experiment to learn how many cups of coffee he can drink without urinating. Frost does a pretty good job of replicating the character’s voice and skewed thought processes as we’ve come to know them in the show.

The book was published in 1991, during the show’s second season. Unfortunately, it has a major breach of continuity with the later ‘Fire Walk With Me’ prequel movie. The novel depicts Cooper investigating the Theresa Banks murder, whereas the film assigns that case to agent Chet Desmond. As such, the book cannot be considered part of the official ‘Twin Peaks’ canon. To be fair, this wasn’t Frost’s fault. The Banks murder was originally intended to be Cooper’s case. The movie was forced to change that storyline when Kyle MacLachlan initially refused to reprise his role. (MacLachlan eventually relented and joined the movie in a reduced capacity.)

Aside from that problem, the ‘Autobiography’ is an entertaining, brisk read. Most of Cooper’s entries are very short, so the 195 pages fly by pretty quickly. However, its emphasis on comedy makes for a less compelling story than the emotionally-harrowing Laura Palmer diary. That earlier book also had the benefit of allowing us into the mind of a character that existed only off-screen on the TV show. Because the series already provided us with plenty of time to get to know Cooper, this book is much less essential to understanding the character.

‘My Life, My Tapes’ is currently out of print, but used copies can still be obtained easily enough on the secondary market.