Portions of this article first appeared in our review of the domestic Blu-ray release of 'Blue Velvet'. 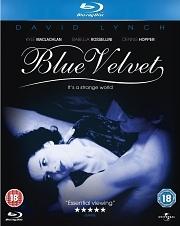 Of everyone associated with the film adaptation of the science fiction epic 'Dune', David Lynch was perhaps the most keenly aware of just how deeply he'd gotten in over his head. He has often cited production of the movie as one of the worst experiences of his life. The critical lambasting and box office failure of that picture appeared to signal the end of Lynch's career. However, despite that setback, Lynch negotiated with producer Dino De Laurentiis to make one more, low-budget movie for which he would have total artistic control. The result was 'Blue Velvet', one of the most challenging and controversial films of the 1980s, and a genuine masterpiece.

In many respects, 'Blue Velvet' is David Lynch's mission statement as a filmmaker. After barely surviving the backlash against 'Dune', Lynch buckled down to write a script that would encompass his views as a storyteller and his peculiar fascinations as an artist. On its surface level, the movie is an engrossing murder mystery. After returning home from college to visit his ailing father, young Jeffrey Beaumont ('Dune' star Kyle MacLachlan) stumbles upon a severed human ear in a field. Fascinated by this discovery, he enlists the help of a police detective's daughter, the wholesome girl-next-door Sandy Williams (Laura Dern), to investigate a third-rate lounge singer named Dorothy Vallens (Isabella Rossellini) who appears to be connected to the case. For Jeffrey and Sandy, this starts out as an exciting and fun Hardy Boys/Nancy Drew mystery come to life. However, the more they learn about Vallens and the people around her, the more dark and disturbing secrets they discover about their seemingly-idyllic small town, and the more Jeffrey has to question his own motivations for pursuing the matter. As Sandy says to him at one point, "I don't know if you're a detective or a pervert." Ultimately, Jeffrey himself isn't sure.

This is the sort of thing that Hitchcock would have a field day with, and Lynch isn't afraid at all to embrace that connection. In the movie's signature scene, a snooping Jeffrey hides in Dorothy's closet and voyeuristically watches through the slats of the door as she is abused by the film's villain, Frank Booth (Dennis Hopper in a career-defining performance). It could be a moment out of 'Rear Window' or 'Vertigo', until Lynch spins the scene into pure nightmare. Frank is a horrifying monster of unbridled id. His torture and rape of Dorothy is brutal and still uncomfortable to watch even decades later. Even at his most envelope-pushing (such as the graphic murders in 'Frenzy'), Hitchcock never went, or probably even dreamed of going, anywhere near this far. The physical and sexual degradation on display is further trumped by the psychological implications. While he watches, Jeffrey is not only helpless to do anything to stop the abuse, he finds himself turned on by it, and doesn't know what to do with those feelings. Most distressing of all is Dorothy's own reaction, which divided critics of the day into those who hailed the film as the work of an uncompromising visionary, and those who decried it as repugnant misogyny.

In narrative terms, 'Blue Velvet' is one of the most linear and comprehensible of Lynch's works. The mystery has a clear solution with a coherent beginning, middle and end, and a satisfying payoff. (That isn't necessarily the case with many of the director's later films.) Nonetheless, once you dig beneath the surface a little, it's a profoundly strange movie. It's both a thriller (a very harrowing, nightmarish one) and a satire of small town Americana, filled with surreal affectations and deadpan performances. It's an homage to classic film noir and to 1950s melodrama. It's goody-two-shoes wholesome on the one hand, and violently depraved on the other. The script overflows with hilariously perverse dialogue. ("Here's to your fuck, Frank.") Lynch somehow manages to be both ironic and unironic at the same time. He believes that the world is a deeply dysfunctional place, but he also truly believes in the ultimate, seemingly naïve message of the piece, that love can triumph and goodness can save the world.

'Blue Velvet' is the work of an artist with a distinct and unique voice. The film is as much about texture as it is about story or theme. Lynch obsesses over and luxuriates in details such as the velvet curtains swaying in the breeze behind the opening credits, the careful sculpting of light and color around Dorothy in the night club, and of course the famously metaphor-laden opening scene. These details tell the story as much as the dialogue does, and help to create a fully-realized world that extends beyond the confines of the plot.

While the film was only a modest box office success, it caused a critical sensation upon its release. It was equally celebrated and excoriated by reviewers. Depending on whom you listened to, it was either one of the best films of the decade, or one of the worst ever made. New Yorker firebrand Pauline Kael famously championed the picture, while Roger Ebert railed against it as one of his most hated movies of all time. Eventually, 'Blue Velvet' earned Lynch his second Academy Award nomination, and has gone on to be recognized as one of the most daring and important films to come out of the 1980s.

'Blue Velvet' was previously released on Blu-ray in the United States in 2011. This disc from Universal Studios Home Entertainment and a label called IndiVision marks the film's debut on the format in the UK. The disc itself launches with the trailer of a firm called Scanbox Entertainment, which implies that it has been licensed from an earlier Danish Blu-ray release.

The movie can be purchased either separately or as part of a David Lynch box set that also includes new editions of 'Eraserhead', 'Dune', 'Wild at Heart', 'Twin Peaks: Fire Walk With Me' and 'Lost Highway'. Unfortunately, the handsome packaging of the box set is its greatest asset. Most of the Blu-rays in the box are compromised in one way or another, including this one.

The UK disc is locked to Region B playback and will require a compatible Blu-ray player to operate. The disc will not function in a standard American Blu-ray player without a region code modification. The bonus features on the disc are also encoded in PAL standard-def video.

Unlike the American release, this UK Blu-ray loads to a main menu screen, rather than auto-playing the movie right away. 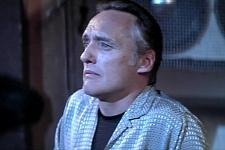 The UK release appears to stem from the same basic color transfer as the earlier American Blu-ray, with some modifications. For one thing, the entire movie has been authored onto a single-layer BD-25 disc and (for those who fret over such things) has a lower average bit rate. In my comparisons, this didn't seem to affect the resolution of fine object detail to any significant degree. Screen shot obsessives may find marginal differences in individual still frames, but during playback, by the time I ejected one disc and loaded up the next, my human short term memory failed to register any complaints in this regard. In a few inherently grainy shots, the UK disc looks a little noisier, but not enough to be objectionable if judged on its own.

With that said, the UK disc is noticeably darker than the American copy. The difference is relatively small, but the disc loses shadow detail in dark scenes. For example, the first scene of Dorothy Valens in the nightclub is photographed with a very carefully sculpted use of light and shadow. The scene ends with the singer's profile in silhouette. On the American disc, you can clearly discern the distinction between her face and her shoulder with a subtle highlight separating the two. On the UK copy, her whole body blends together as one dark mass. Again, if solely judged on its own, the UK version would probably not stand out as being "wrong," but in comparison, it's slightly inferior.

Otherwise, much like the American disc, the UK copy's 1080p/AVC MPEG-4 transfer (presented at a 2.35:1 aspect ratio) has a fairly good sense of detail and filmic texture. Colors are strong. The strange visual anomalies that I noted in my review of the American release (two small glare spots in the opening scene, and a bizarre pinstripe pattern in the sky during the scene where Jeffrey finds the ear) are still present here. I'm still unsure of whether these were photographic artifacts introduced during production or video transfer flaws. In either case, these issues are both brief and don't recur afterwards. 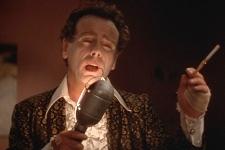 As best as I can tell, the disc's DTS-HD Master Audio 5.1 soundtrack is a direct copy of the one on the American Blu-ray. The audio has good distinction and musicality in Angelo Badalamenti's score, and very good clarity in Alan Splet's sound design. Attentive David Lynch fans will recognize many auditory similarities between 'Blue Velvet' and 'Dune'. Subtle details like the sound of wind in Dorothy's apartment, or the mechanical, industrial sounds in the bad parts of town, are crucial to Lynch's vision. The 'Blue Velvet' soundtrack is fascinating to listen to.

The musical score and occasional sounds such as revving car engines deliver a moderate amount of bass, but the low end dynamics don't extend too deeply. This is not a bass junkie's soundtrack.

My presumption is that this is the same 5.1 mix that David Lynch personally prepared for MGM's 2002 Special Edition DVD release. Over the last decade, the director has developed an aversion to surround sound. Like many Lynch-approved 5.1 mixes, the Blu-ray soundtrack is actually only 3.1. If there's any surround activity at all in the movie, I didn't notice it. The back channels are silent. 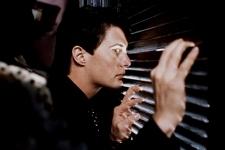 Aside from one major omission (more on this shortly), the UK Blu-ray has the same assortment of bonus features as the American disc. However, the standard-definition supplements have been re-encoded in PAL format, and those items previously in HD (the outtakes and the theatrical trailer) have been downgraded in resolution.

If it seems like I've spent an excessive amount of time comparing this UK Blu-ray release of 'Blue Velvet' to the previous American edition of the film, keep in mind that this web site is an American publication with a primarily American readership. To that end, fans of the film who live in North America will find little value in importing this UK disc, other than the exclusive Dennis Hopper interview. In other respects, the UK copy has a slightly inferior video transfer, is missing the invaluable collection of deleted scenes, and is locked to Region B. The American disc is a better package overall.

However, for viewers who live in the UK and don't wish to import from the United States, Universal's Blu-ray is acceptable and even satisfying on its own terms. And of course, the movie is still a masterpiece.