You certainly have to give David Lynch credit for persistence. Despite his feelings of resentment about the cancellation of ‘Twin Peaks’ and the stillbirth of his attempted sitcom ‘On the Air’, the idiosyncratic filmmaker made yet another attempt to work in the television medium in 1993. Hoping that HBO would allow him more artistic freedom and opportunity to develop a property over time, Lynch began production on an anthology series called ‘Hotel Room’. Unfortunately, the fact that you’ve probably never heard of the show (much less seen it) should tell you how well those plans worked out for him.

“Sometimes in passing through, they found themselves brushing up against the secret names of truth.”

The premise of the series was that every episode took place in the same setting, Room 603 of the mysterious Railroad Hotel, but in different eras and with a fresh batch of characters. The hotel itself seems trapped outside of time. Very little about the room changes from decade to decade. The only recurring characters are a nameless bellboy and maid, neither of whom ages.

Both the first and third episode were directed by Lynch and written by Barry Gifford, author of the original ‘Wild at Heart’ novella that Lynch had adapted into a movie a few years earlier. Although Gifford had no direct involvement with the writing or production of that film, he was a big fan of the final product and struck up a working relation with the director. (They would later collaborate again on ‘Lost Highway’.)

The first episode, ‘Tricks’, is set in 1969, and stars Lynch regulars Harry Dean Stanton and Freddie Jones. Mo (Stanton) nervously brings a prostitute named Darlene (Glenne Headly) to his room, whereupon he’s rudely interrupted by old acquaintance Lou (Jones) before he can get down to business. Mo and Lou share dark secrets in their past that are hinted at but never elaborated upon. All we know for certain is that Mo doesn’t want Lou around, but is incapable of acting against him as the interloper grows increasingly aggressive towards his date. The episode has an intriguing film noir tone, and suggests themes of fractured identity and deconstructed reality that Gifford and Lynch would explore to greater (and more successful) extent in ‘Lost Highway’. However, overall, it’s mostly a flat and unexciting experiment in Theatre of the Absurd-style drama. The characters talk at cross purposes just for the sake of doing so, and constantly reference backstory that we’re not privy to learning more about. Ultimately, the piece feels like a pointless con-game, which may well be the point unto itself, but doesn’t especially work as the introduction to a new series. 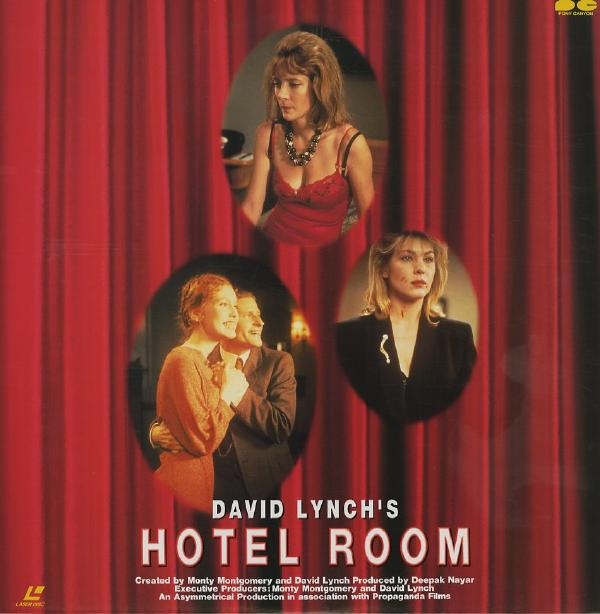 The second episode, ‘Getting Rid of Robert’, is the weakest and least interesting of the three produced. Written by novelist Jay McInerney (‘Bright Lights, Big City’) and directed by ‘Saturday Night Live’ producer James Signorelli, this one is set in 1992 and is intended to have a breezy, light-hearted tone. Deborah Unger, Mariska Hargitay (so young that she’s barely recognizable) and Chelsea Field are three friends who have apparently all had relationships with the title character, a smarmy jackass played by Griffin Dunne. They wait in the room to ambush the man so that Unger (his current girlfriend) can dump him. Some catty infighting ensues, followed by a blackly comical twist designed to bring a Lynchian feeling to the proceedings. Aside from the ending, the story (in which a group of yuppies strain to find deeper meaning in their lives but are unable to see past their own shallow desires) is more of McInerney’s milieu than of Lynch’s. In fact, in some ways, it plays like a prototype ‘Sex & the City’. It’s too lightweight and feels out of place with the tone of the other episodes.

If the first two episodes make for a rough start, fortunately the third, titled ‘Blackout’, is genuinely terrific. Set in 1936, the story concerns two young tourists from the Midwest (Crispin Glover and Alicia Witt) who visit New York City for the first time and wind up stuck in their hotel room during an electrical blackout. The girl obviously has some emotional and mental problems, and as the story unravels, so does she. Directed by Lynch in a very simple, unostentatious style, the piece is a tour-de-force of atmosphere, and builds to a powerful emotional payoff. Both actors give affecting performances, especially Witt, who does a marvelous job of bringing a tragic innocence and vulnerability to her character. This may be one of the most undervalued of Lynch’s works, and one most deserving of rediscovery.

Sadly, with three half-hour episodes in the can, the executives at HBO decided that the show just wasn’t working out. They pulled the plug on further development, and bundled the existing episodes together into a single omnibus film that aired with negligible promotion or fanfare. ‘Hotel Room’ was little seen and quickly forgotten. Thus ended David Lynch’s career in television.

The program was released on VHS back in the day, but the best viewing option was a Laserdisc edition from Japan. (Any references you find on the internet to DVD copies are bootlegs made from one of these sources.) The Laserdisc’s video is of passable quality. The 4:3 picture is very soft and noisy. It also has permanent Japanese subtitles in the image. Those are annoying, but you learn to tune them out after a while. The disc is watchable, but hasn’t aged well. In lieu of any better alternatives, I’m glad to have it.