Working through this David Lynch marathon, it occurs to me that I’d almost missed one of the filmmaker’s other, much lesser-known TV shows. To be fair, this one had the least involvement from Lynch, was little seen at the time, and has been almost entirely forgotten since. Nonetheless, for the sake of thoroughness, allow me to step back a moment to take a look at the obscure travelogue series ‘American Chronicles’.

“There is nothing ugly.”

With the early success of ‘Twin Peaks’, other TV networks wanted to get in on the David Lynch action. In the fall of 1990, as ‘Peaks’ entered its ill-fated second season, Fox commissioned what we would now call a Reality show (but was at the time termed a “documentary”) from Lynch/Frost Productions. ‘American Chronicles’ was primarily the work of Mark Frost. Lynch served as an uncredited Executive Producer, and also co-directed one episode with Frost that never aired in the U.S. Unfortunately, the show was a ratings dud that came in dead last in its time slot. It was canceled after just three months.

As mentioned, the series was a travelogue. Frost and his team roamed the country to document what they felt was the stranger side of the American landscape, or at least to put their skewed perspective on familiar sights. The half-hour episodes had an unconventional format. Minus commercials, each ran about 22 minutes long. Of that, a typical episode would consist of about 18 minutes of pure montages, with occasional narration from actor Richard Dreyfuss. Some of the montages were just images set to music. Others were montages of interview sound bytes. Rarely did the show impose a formal structure or narrative. Few of the people interviewed were ever identified. I expect that Frost’s ambition was to make a small-screen ‘Koyaanisqatsi’.

13 episodes were produced. Years ago, I obtained a VHS collection of 12 of those episodes recorded from broadcast. (Sadly, the one missing is the episode co-directed by Lynch, called ‘Champions’, which only aired in the UK.) I’d almost forgotten that I still had these tapes, but managed to dig them out from a box in my closet. Over the weekend, I found time to watch about half of the episodes.

The premiere, ‘Farewell to the Flesh’, travels to (pre-Katrina, obviously) New Orleans for Mardi Gras. Dennis Quaid and John Goodman are seen in long shots hosting the parade. I’m not entirely sure that they knew they were being filmed for this. As the episode winds down, a typical example of Dreyfuss’ arch voiceover states, “The spirits, spent and weary, wander back to their otherworldly realms.”

‘The Eye of the Beholder’ takes us to the Miss Texas USA pageant, where the hair is big and the clothes are loud. The camera lingers in slo-mo over the swimsuit portion of the competition. The episode ends with an absolutely hilarious interview wherein one of the contestants gives us the following doozy of a quote when asked to define beauty:

I don’t care if somebody has scars all over their body. I don’t know. I know that there are people out there that consider me beautiful. I know my parents do. But I think if I woke up tomorrow and found out I had leprosy or something and I had to get an arm cut off or something like that, I would still be beautiful. And this just bothers me because I am a very caring person, and when I see somebody that is less fortunate than me looks-wise, because in today’s society, looks is almost everything and people that are beautiful have it just as hard as people who are ‘quote’ ugly.

‘Manhattan After Dark’ is exactly that, a look at the city’s nightlife. However, it’s less about the party scene than about people who actually work through the night, such as cabbies, bakers, road crews, etc. ‘Auto-Obsession’ starts as an examination of why Americans love their cars so much, but later takes a dark turn to focus on accident rates, pollution and scrap heaps. Dreyfuss makes the dubious claim that the world is expected to run out of gasoline by 2033.

Some episodes consist of two half-length stories, such as ‘Here Today, Gone Tomorrow’ (about a traveling circus) and ‘Truck Stop’ (about the surprisingly fascinating subculture of the service industry built around long-haul truckers). In the circus story, one of the interviewed clowns says: “The circus would probably be the most awful place in the world if you didn’t want to be there. You have to want to be there, or you are miserable.” That sort of negative spin on presumably joyous activity is common of the show. 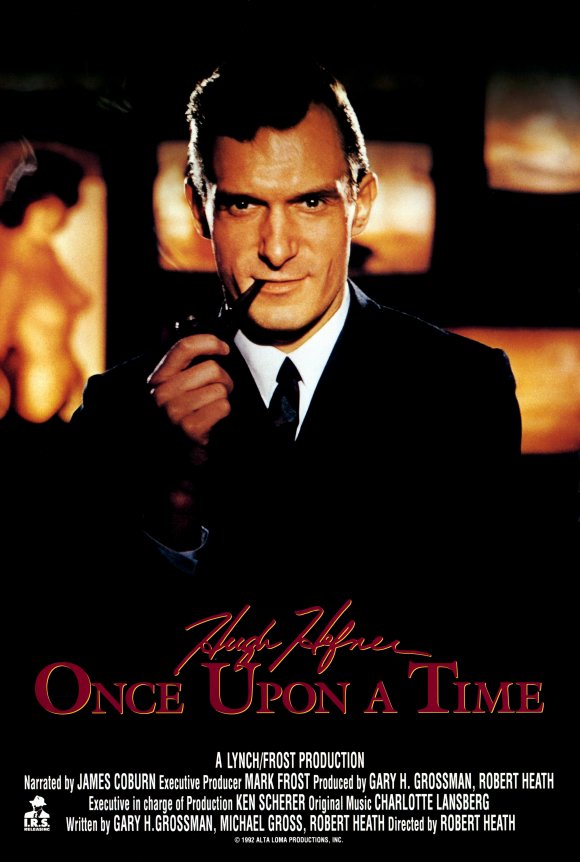 The series’ most famous episode is the most traditionally documentary-like in format. ‘Once Upon a Time’ takes us to the Playboy Mansion for a brief overview of Hugh Hefner’s life and the creation of the Playboy empire. Produced with the full participation of Hefner, this is basically a puff piece that works hard to sell the official myth of Hef as a sexual liberator and First Amendment crusader who had (at the time) finally settled down into domestic tranquility with his second wife. Looking back, we know how well that worked out for him. Tying Hefner’s interests together with Lynch/Frost’s, the episode concludes with the printing of the Sherilyn Fenn issue of the magazine.

The remaining episodes are titled: ‘Semper Fidelis’ (about the Marine Corps, presumably), ‘High School Reunion/Miss Texas’, ‘Defenders of the Faith’, ‘After a Fashion/An American Camelot’, ‘Diamonds Are Forever/The Future That Never Was’, ‘Class of 65’ and the aforementioned ‘Champions’.

As a whole, ‘American Chronicles’ is basically video wallpaper, more suitable for playing in the background while you do other things than for sitting down to actively watch. Episodes present a very superficial, often clichéd look at the subject matter. On the other hand, the program is well photographed and skillfully edited, and the montages can be quite evocative. Viewed today, it actually offers a fairly interesting window into a past now two decades gone.

‘American Chronicles’ certainly wasn’t a bad series, but it also wasn’t compelling enough to survive on primetime network television. It might have possibly done better on PBS.

An extended version of the ‘Once Upon a Time’ episode was released on VHS, Laserdisc and DVD by Playboy Home Video. The DVD is out of print, but copies are still available cheaply from Amazon Marketplace sellers. Unfortunately, this was the only episode of the show officially released on home video.

What I had to watch for this screening were 20-year-old videotapes that had already been sourced from fourth- or fifth-generation copies when they started. You can imagine what the quality looks like. Some episodes are pretty badly mangled with tracking errors. It probably didn’t help that this was the first time I’d fired up my VCR in years. I’m surprised that no enterprising soul has made the effort to digitize the episodes and post them on YouTube.

Perhaps the best part of this viewing experience was hearing the promos for ‘Parker Lewis Can’t Lose’ and ‘In Living Color’ over the episode end credits.