Mickey Rooney gets above-the-title billing, but National Velvet is all about a spunky, fresh-faced pre-teen named Elizabeth Taylor, who grabs the reins of this beloved family film about a horse-crazy English girl's obsession with a gelding and gallops away with it. Though a bit creaky around the edges, National Velvet still warms the heart, and Warner Archive honors this classic with a brand new master struck from a 4K scan of the original Technicolor camera negatives. National Velvet is a national treasure and this Blu-ray presentation outruns any other home video version. Highly Recommended.

Metro-Goldwyn-Mayer may be best known for its lavish, legendary musicals, but the studio also produced more family films than any of its Golden Age competitors. In addition to The Wizard of Oz, MGM mounted The Yearling, The Secret Garden, Little Lord Fauntleroy, the long-running Andy Hardy series, and several movies starring an intrepid collie named Lassie. One of those Lassie pictures featured a striking 11-year-old girl named Elizabeth Taylor, and it was such a success MGM rushed the fresh-faced adolescent with bushy black eyebrows into another animal film that would make her an instant star.

National Velvet, an adaptation of Enid Bagnold's novel about a young English girl's obsession with a spirited horse, has charmed audiences with its whimsy, warmth, and vitality for decades. Much like The Wizard of Oz, the film would be regularly revived for kiddie matinees, and it was on one of those occasions in the early 1970s that I first saw this classic movie. Though the appeal of National Velvet seems to have waned since the advent of home video, the picture remains a delightful, if dated, portrait of family life and one girl's burning desire to see her prized gelding run in England's most famous horse race, the Grand National.

Velvet Brown (Taylor) lives with her stoic yet loving parents (Donald Crisp and Anne Revere), two older sisters (Angela Lansbury and Juanita Quigley), and red-headed, freckle-faced younger brother (Jackie Jenkins) in a tranquil and idyllic seaside village. One day, she encounters an aimless, sullen former jockey named Mi (Mickey Rooney), who now hates horses because, he says, he was thrown by one. Velvet impulsively invites him to dinner at her house and the two soon strike up a friendship.

When Velvet espies a wild, athletic gelding galloping freely in a field, she falls instantly in love, and when its fed-up owner (Reginald Owen), who can't abide the animal's free spirit and recalcitrant attitude, decides to raffle off the rowdy horse, she prays her ticket will be picked. Needless to say, Velvet gets the gelding, whom she dubs The Pie, and soon convinces her parents to let her enter him in the Grand National steeplechase race. Convincing Mi to train The Pie for the grueling event is a tougher task, but the spunky, starry-eyed Velvet won't take no for an answer. Trials and tribulations ensue, one of which leads Velvet to make the rash and risky decision to masquerade as a boy and ride her prized horse in the big race herself. 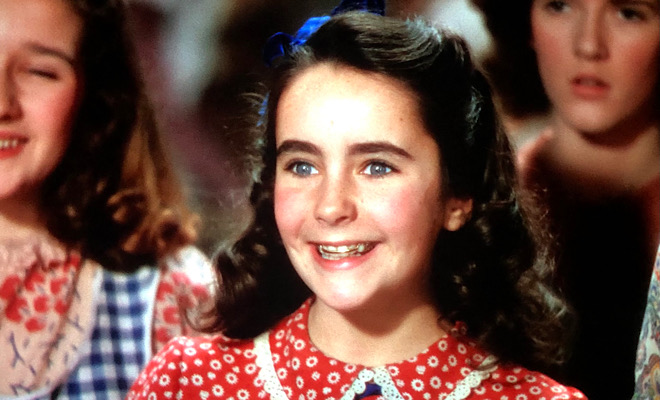 Directed by master craftsman Clarence Brown, who received his fifth Oscar nomination for his tender, reverent treatment of the tale (he would nab his sixth and final nod for his next film, The Yearling), National Velvet deftly weaves delicate family dynamics and the maturation of an adolescent girl into an exciting sports yarn. The climactic race sequence still supplies plenty of thrills, but its effectiveness stems from the strong character delineation that precedes it. We don't just get to know the Browns through their various endearments and foibles, we feel like we're part of the family, and that intimate connection helps the story resonate.

As do its feminist themes. Dozens of films deal with female empowerment today, but back in 1944, girls didn't have many cinematic role models. Velvet may be prim, proper, and privileged, but she's not afraid to buck established norms and break rules to get her chance to snatch the brass ring. It's easy to forget women and girls were often patronized, marginalized, and objectified in the 1940s, so it was quite something for a movie to champion a resourceful, fearless, and dedicated young heroine who grabs the reins of her life and chooses her own path. 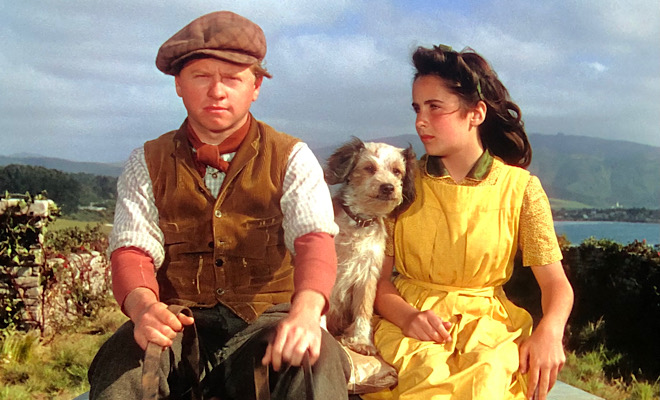 Long before she grew into one of the world's sexiest women, Taylor was just a cute kid, but it's still tough to reconcile little Velvet Brown with the voluptuous Maggie the Cat of Cat on a Hot Tin Roof, a role she would play a mere 14 years later. The Taylor of National Velvet has yet to undergo the full MGM glamor treatment, but her spitfire personality is already on full display. No saccharine, cutesy child star is she; much like Judy Garland and Natalie Wood, Taylor projects an innate sincerity, wisdom, and magnetism that instantly grab our attention and make it impossible to concentrate on anyone else while she's on screen.

That includes the top-billed Rooney in his last role before leaving Hollywood for World War II military service. Rooney, who knew more than a thing or two about being a child star (he supplanted Shirley Temple as the nation's top box office attraction in the late 1930s and held the spot for a few years), files a surprisingly restrained grown-up portrayal that's about as far from Andy Hardy as he could get. Just 24 when he made National Velvet, Rooney seems much older and more than willing to yield the spotlight to the luminous Taylor. The two make a nice pair, but even at 12, Taylor overshadows her far more seasoned co-star. (Fun fact: between the two of them, they racked up a total of 15 spouses!!!)

As Velvet's parents, Crisp and Revere, who would win a Best Supporting Actress Oscar for her quietly penetrating performance, project a marvelous chemistry that makes their on-screen relationship feel authentic. Both actors excelled in paternal and maternal roles (Crisp won his Oscar for playing the noble patriarch in How Green Was My Valley and Revere would go on to portray memorable moms in Gentleman's Agreement and A Place in the Sun before the House UnAmerican Activities Committee blacklisted her in the early 1950s) and their characters here remind us of the relationship Thomas Mitchell and Barbara O'Neil shared as Gerald and Ellen O'Hara in Gone with the Wind. 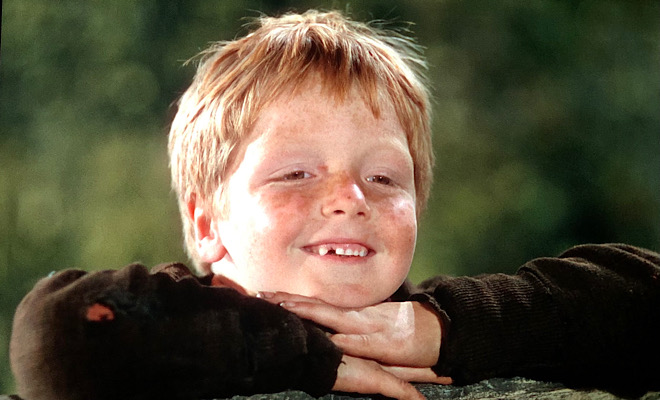 In just her second movie after her dazzling Oscar-nominated debut in Gaslight, 19-year-old Angela Lansbury shines - and looks stunning in Technicolor - as Velvet's love-struck oldest sister. In one of her last roles, former child star Juanita Quigley is given little to do, but veteran character actors Reginald Owen, Arthur Treacher, and Norma Varden make the most of their limited screen time. And who can resist the Puck-ish charms of freckle-faced, gap-toothed seven-year-old Jackie Jenkins, who steals every scene in which he appears as the mischievous baby of the Brown family? His droopy eyes and deadpan demeanor prompted critic Pauline Kael to call him "the little brother of everyone's dreams."

Nominated for five Oscars (in addition to Revere's award, the movie won Best Editing) and boasting glorious Technicolor photography, National Velvet doesn't wield the impact it once did, but remains a delightful family film that's sure to warm the cockles of your brood's heart, especially over the holidays. No doubt about it, National Velvet is a national treasure, and at last it gets the Blu-ray treatment it has long deserved. 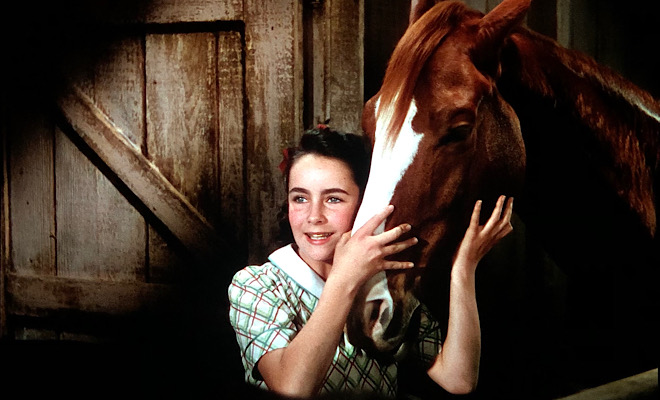 Vital Disc Stats: The Blu-ray
National Velvet arrives on Blu-ray packaged in a standard case. Video codec is 1080p/AVC MPEG-4 and audio is DTS-HD Master Audio 2.0 mono. Once the disc is inserted into the player, the static menu with music immediately pops up; no previews or promos precede it.

A new HD master struck from a 4K scan of the original Technicolor camera negatives yields another glorious 1080p/AVC MPEG-4 transfer from Warner Archive. Grain levels fluctuate a bit and some scenes appear a tad soft, but the spotless image faithfully honors Leonard Smith's Oscar-nominated cinematography and exudes a palpable film-like feel. Terrific clarity and contrast produce a well-balanced picture that showcases fine details, costume textures, and the natural beauty of the seaside exteriors. The enhanced sharpness of high definition occasionally draws undue attention to painted backdrops and Taylor's horse-riding double, but that's the nature of the beast. On the flip side, we're able to spot the individual freckles on the faces of Revere and Jenkins, examine Taylor's bushy eyebrows, and see all the slimy contours of her orthodontic retainer.

And then there's the Technicolor. Taylor's satiny hot pink jockey outfit with its bright yellow accents is the star of the show, but the verdant green landscapes, crystal blue ocean, the bold red frock Taylor wears early in the movie, and an assortment of pastels are all lush and vibrant. The hues appear slightly faded in a few isolated shots, but the overall presentation delights the eye. Inky blacks make a statement, the bright whites resist blooming, and excellent shadow delineation keeps crush at bay. It's been a long time since National Velvet looked this good on home video, if ever, so if you're a fan of this heartwarming family film, now is the time to revisit it.

The DTS-HD Master Audio 2.0 mono track supplies clear, well-modulated sound, although a volume boost from my normal listening level was necessary to achieve optimum results. A wide dynamic scale handles all the highs and lows of Herbert Stothart's syrupy, string-laden score without a hint of distortion and strong bass frequencies lend the climactic Grand National race a thundering immediacy as the horses furiously gallop around course. All the dialogue is easy to comprehend and no age-related hiss, pops, or crackle intrude.

The only extra is the film's three-minute original theatrical trailer presented in high definition.

National Velvet feels a bit dated today, but this beloved film about a horse-crazy young girl's obsession with a gelding and burning desire to see him run in the Grand National still tugs the heartstrings and showcases a fresh-faced, unspoiled Elizabeth Taylor in one of her most identifiable and memorable roles. A brand new master struck from a 4K scan of the original Technicolor camera negatives highlights Warner Archive's Blu-ray presentation of this family classic. Highly Recommended.