It Happened One Night (Criterion)

Opposites attract with magnetic force in this romantic road-trip delight from Frank Capra, about a spoiled runaway socialite (Claudette Colbert) and a roguish man-of-the-people reporter (Clark Gable) who is determined to get the scoop on her scandalous disappearance. The first film to accomplish the very rare feat of sweeping all five major Oscar categories (best picture, best actor, best actress, best director, and best screenplay), 'It Happened One Night' is among the most gracefully constructed and edited films of the early sound era, packed with clever situations and gags that have entered the Hollywood comedy pantheon. Featuring two actors at the top of their game, sparking with a chemistry that has never been bettered, this is the birth of the screwball comedy.

My discovery of Frank Capra's 'It Happened One Night' — and my initial introduction as a whole to the particular subgenre under which it is categorized — was in the early 1980s on a bright, sunny Valentine's Day weekend. It was two days of classic movies full of laughter, amorous charm and romance. To this day, it remains a memorable weekend because on television, they aired a collection of notable, unforgettable features that essentially influenced my admiration for motion pictures. It was also the time I discovered Humphrey Bogart in 'Casablanca,' Cary Grant in 'His Girl Friday,' Katherine Hepburn in 'The Philadelphia Story,' Jimmy Stewart in 'The Shop around the Corner' and Audrey Hepburn in 'Sabrina.' Although they're all splendid pictures in their own right, the two films which left a lasting impression that weekend are the tender romance of Hepburn and Gregory Peck in the superb 'Roman Holiday' and the hilariously witty banter of Clark Gable and Claudette Colbert in this brilliant classic.

Of course, it would be another decade before I learned to truly appreciate their greatness on a deeper, more analytical level, particularly the significance of Capra's oft-labeled — and wrongly so — screwball comedy. Although the romantic-comedy subgenre already existed prior to this production, Robert Riskin's script, inspired by Samuel Hopkins Adams's 1933 shorty story "Night Bus," the rights to which Capra purchased almost immediately, fundamentally established the light-hearted plot according to the familiar blueprint we now recognize. A pair of likeable, seemingly opposite and hesitant protagonists, who under other normal circumstances would never meet, are brought together by incidental happenstance and after overcoming various obstacles, discovery they make a great match. The plotline's familiarity may be off-putting to contemporary audiences, but it should be respected and enjoyed as the one that started it all — essentially imitated and emulated ever since. 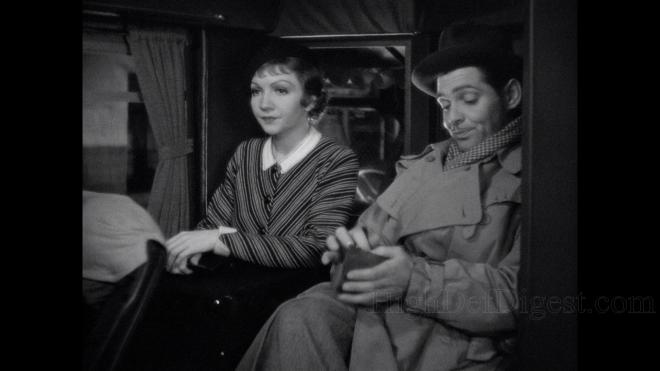 All the ingredients for the conventional rom-com are here, starting with our two star-crossed lovers who at first dislike each other because they come from opposite ends of the social stratum and after an unfriendly but entertainingly funny disagreement over seating arrangements. Gable stars as recently-unemployed Peter Warne, the typical ace-reporter with a chip on his shoulder who depends on his fast-talking charm to save him from a jam. Meanwhile, Colbert plays spoiled heiress Ellen Andrews, the very easy to figure out socialite who's been basically coddled her entire life and expects the world to be her oyster. They bump into one another while each is traveling via bus to New York in what is now-referred to as the "meet-cute," the standard awkward clash of personalities which sets the plot into motion. Despite the now-obvious eventual romance, what makes their encounter and the plot feel fresh is the renowned performances and jovial chemistry of our two leads, convincing portrayals of two people who could never possibly fall in love but somehow defy our expectations.

The first and only one of three motion pictures to ever win the "Big Five Academy Awards" (Best Picture, Actor, Actress, Director and Screenplay), Frank Capra's 'It Happened One Night' remains a memorable standout, a categorical classic and a must-watch for any respectable cinephile, especially for those who genuinely love romantic-comedies. Other than the marvelous performances of Gable and Colbert, the dialogue is outright genius, consistently creating one hilariously brilliant situation of witty banter after another, most of which is made memorable by Gable's rapid-fire, cocksure quips. Whether pestered by the bus driver or thinking quickly on his toes when confronted by attempted blackmail, the legendary actor is an absolute joy to watch, with the hitchhike scene being the film's timeless highpoint. But the true brilliance of it all is a hilarious tale that methodically shows why the two characters perfectly complement one another, an important aspect sadly missing in many modern rom-coms.

After 80 years, Capra's classic comedy remains the hilariously witty forebearer of the genre and continues to entertain without missing a beat.

This Blu-ray edition of Frank Capra's 'It Happened One Night' comes courtesy of The Criterion Collection (spine #736) on a Region A locked, BD50 disc and housed in their standard clear keepcase. Accompanying the disc is a foldout, poster-size pamphlet with a lovely publicity photo of Gable and Colbert and an insightful essay entitled "All Aboard!" by author and film critic Farran Smith Nehme. There are no trailers or promos before being greeted by the distributor's normal static menu screen and options.

According to information in the accompanying booklet, this 1080p/AVC MPEG-4 was created in 4K resolution from a 35mm safety composite fine-grain stock, which was itself made from the original nitrate negatives and a 35mm nitrate print.

The results, I'm happy to report, are absolutely fantastic and magnificent for an 80-year-old groundbreaking classic, showing spot-on and terrifically well-balanced contrast with clean, brilliant whites throughout. With a natural, very thin layer of grain washing the image, black levels are accurate and true, giving the picture a beautiful cinematic quality. Shadows are at times quite overwhelming, but background info is not sacrificed as many fine objects remain plainly visible all the way through. Presented in a 1.33:1 aspect ratio, definition and clarity are as sharp and detailed, revealing textures in the faces, very fine lines, and the high-def presentation comes with perceptible and appreciable depth.

Using the same 35mm nitrate elements, Criterion engineers do a splendid job preserving the original monaural soundtrack. Despite being entirely contained in the center channel, the uncompressed PCM track comes with a terrific acoustical presence and fidelity. Some air and hissing, likely due to the age of the source and the way it was originally recorded, can be heard throughout, but it's negligible as minor background details remain crystal clear and splendid with surprisingly good movement within the soundfield. Dialogue is pitch-perfect and precise from beginning to end, allowing for every wonderfully memorable line and back-and-forth conversation to be intelligible and distinct.

Overall, this lossless mix is a first-rate and brilliant audio presentation of a marvelous Frank Capra classic.

The first and only one of three motion pictures to ever win the "Big Five Academy Awards," Frank Capra's 'It Happened One Night,' starring the memorable pairing of Clark Gable and Claudette Colbert, remains an unforgettable standout, a categorical classic and a must-watch for any respectable cinephile, especially for those who genuinely love romantic-comedies. The Blu-ray from The Criterion Collection arrives with a marvelous audio and video presentation. Along with a healthy and rather terrific assortment of supplements, the overall package comes highly-recommended for enthusiastic fans of the Golden Age classics.

Sale Price 27.99
List Price 39.95
Buy Now
3rd Party 22.94
In Stock.
See what people are saying about this story or others
See Comments in Forum
Previous Next
Pre-Orders
Tomorrow's latest releases