The Maltese Falcon catapulted Humphrey Bogart onto Hollywood's A list, but the role of detective Sam Spade never would have come Bogart's way had it not been for High Sierra, which at last provided the journeyman actor with a juicy part that perfectly suited his persona. Director Raoul Walsh's searing portrait of Roy Earle, a lifelong criminal who hopes to pull off one last heist, might seem like a typical hard-boiled Warner gangster flick, but don't be fooled. High Sierra has a soul. There's as much heart and heartbreak in this adaptation of W.R. Burnett's novel than in any number of straight dramas, and when coupled with Walsh's patented brand of tension and excitement and Bogart's magnetism, the result is a classic and enduring motion picture.

Although most Warner gangster movies showcase compelling and fascinating figures like Little Caesar's Rico Bandello, The Public Enemy's Tommy Powers, The Roaring Twenties' Eddie Bartlett, and White Heat's Cody Jarrett, they're all unrepentant bad guys. Roy Earle breaks that mold. He's a "good" bad guy, a three-dimensional character to whom we can relate and for whom we can feel and root. Sure, he's involved in nefarious, illegal activities and has committed violent acts, but there's a warmth and genuine humanity about Roy that endears him to us. Tough yet tender, ruthless yet caring, and plagued by an aching loneliness and debilitating fatigue, Roy may be on the wrong side of the law, but he's really no different than any average Joe who tries to survive day to day. And it's that emotional core - not any fistfights, shootouts, or even a thrilling climactic pursuit - from which High Sierra draws its strength. 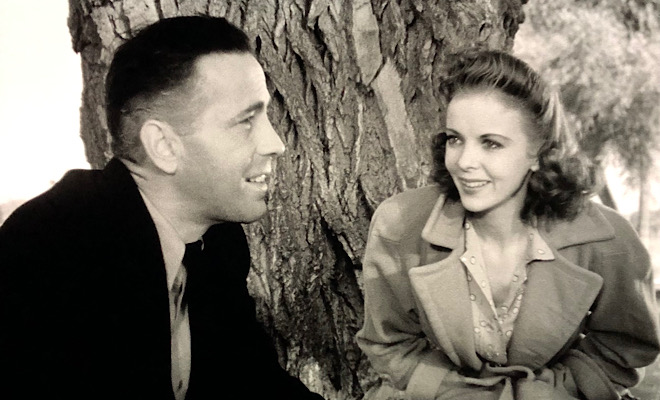 Sprung from prison by Big Mac (Donald MacBride), an aging, ill kingpin who engineers his pardon, Roy agrees to head-up a plot to rob a resort hotel in the Sierra Nevada mountains. Planning the crime is stressful, but Roy's toughest task is finessing the egos and hormones of his young, hotheaded cohorts, Red (Arthur Kennedy) and Babe (Alan Curtis), who lack the patience, restraint, and nerves to handle such a complex job. Roy views Babe's girlfriend Marie (Ida Lupino) as a dangerous distraction, but the sensitive, damaged young woman who's been beaten down by life (and Babe, too) appreciates Roy's maturity and quiet strength and forms an instant attachment to him.

Roy, however, only has eyes for Velma (Joan Leslie), the sweet, handicapped daughter of Pa Goodhue (Henry Travers), whom Roy meets by chance at a remote gas station. Drawn to her fresh-faced naïveté and wholesome decency, Roy vows to help Velma overcome her infirmity while Marie waits loyally in the wings. Of course, the robbery goes horribly wrong, and the violent fallout forces Roy to go on the run in a last-ditch effort to remain free and find the peace and security he's always craved.

Combining rough-and-tumble action with an emphasis on mood, atmosphere, and character development, Walsh expertly bridges the gap between the gangster movies of the 1930s and the burgeoning genre of film noir that would soon dominate the 1940s. Walsh also highlights the story's in-bred western elements, which would so intrigue him, he would remake High Sierra as a western eight years later, retooling the tale and calling it Colorado Territory. (The movie is included in the bonus features of this Criterion edition.) A thrilling and lengthy car chase up the rugged face of California's Mount Whitney (the highest peak in the contiguous 48 states) caps off the literate screenplay by Burnett and John Huston and provides High Sierra with a memorable and devastating denouement. 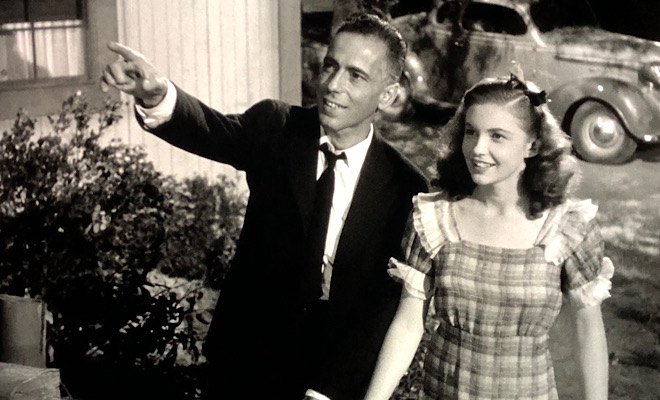 On the strength of her electrifying work in the previous year's They Drive by Night, Lupino received top billing in High Sierra, much to Bogart's chagrin. (He made sure he never would be billed second again.) Her earthy, intense, and passionate portrayal greatly enhances the film, but Bogart dominates the proceedings. As the aging criminal up against a new breed of cocky hoods ("Sometimes I feel like I don't know what it's all about anymore," Roy wistfully opines), Bogart projects a world-weary heaviness and cynical air that mask Roy's tortured soul and make his quest for beauty and purity in an ugly, tainted world doubly moving. After playing countless cardboard thugs for years in support of Cagney, Robinson, and Raft, the macho Bogart puts a kinder, gentler spin on the archetype they created, and before our eyes he at last becomes not just a star, but a romantic leading man. Within two years, the transformation would be complete with the release of Casablanca, and though Lupino can't quite generate the same crackling chemistry with Bogart that he would enjoy with Ingrid Bergman and especially Lauren Bacall, she makes a fantastic foil. It's just a shame the two would never share the screen again.

Bogart had to fight for the role, and only got it after Paul Muni turned it down and Bogart slyly convinced George Raft to pass on it. (The Maltese Falcon and Casablanca were two other notable - and boneheaded - Raft rejections.) Though he effortlessly carries the film on his slight, often hunched shoulders, Bogart fits in snugly with the strong supporting cast. In just his second film, Kennedy shines as the brash, boisterous Red, and in her first feature with her new name, 16-year-old Joan Leslie almost steals the spotlight from Lupino. Velma is one of the film's pivotal parts and Leslie plays it with an assurance and insight that belie her tender age. Henry Travers, Jerome Cowan, Barton MacLane, Isabel Jewell, and a young Cornel Wilde - who sports a strange European accent in his first billed role - also make important contributions to this finely crafted film. 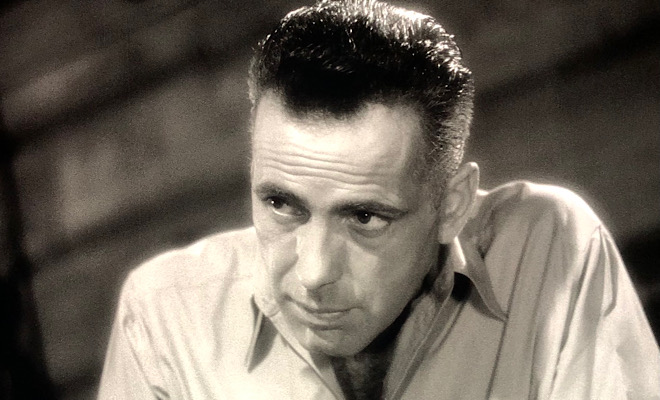 Some uncomfortable racial humor and stereotypes somewhat tarnish High Sierra (a fascinating featurette on actor Willie Best that cogently analyzes the challenges black actors faced in Hollywood during the Golden Age is included in the disc supplements), but Walsh's film nevertheless remains a textured, absorbing, and profoundly moving character study of a cornered man trapped in a stifling life who's desperate to breathe some fresh, clean air. Walsh masterfully juggles tender interpersonal scenes with harsh, violent confrontations, while the Sierra Nevada and Death Valley locations lend the movie an essential grit and authenticity that help it resonate.

In the end, though, it's Bogart's understated portrayal that heightens the impact of this memorable movie that's sadly too often overshadowed by his more famous films. Lest we forget, High Sierra is the picture that started it all and led to such iconic Bogart roles as Sam Spade, Rick Blaine, Philip Marlowe, Fred C. Dobbs, Charlie Allnutt, and Captain Queeg. Roy Earle may be the quietest of the bunch, but he holds a special place in the Bogart film canon, and it's about time he received his due. 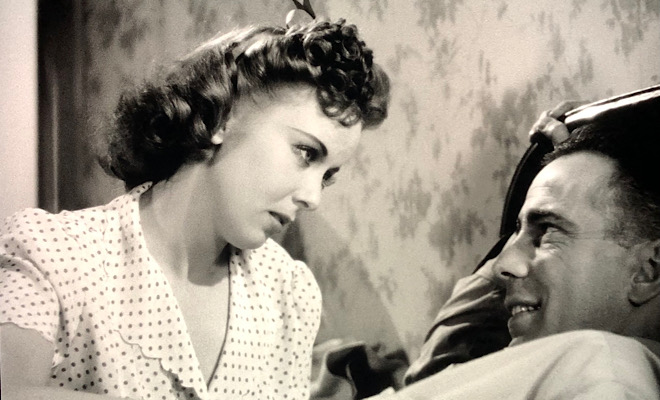 Vital Disc Stats: The Blu-ray
High Sierra arrives on Blu-ray in a two-disc set packaged in a standard Criterion case. A 10-page fold-out booklet featuring an essay by author Imogen Sara Smith, a cast and crew listing, transfer notes, and a couple of illustrations of Lupino and Bogart is tucked inside the front cover. Video codec is 1080p/AVC MPEG-4 and audio is LPCM mono. Once the disc is inserted into the player, the full-motion menu with scene excerpts immediately pops up; no previews or promos precede it.

High Sierra makes its long-awaited Blu-ray debut sporting a high-quality 1080p/AVC MPEG-4 transfer that immerses us in the rugged mountain locations while remaining faithful to Tony Gaudio's naturalistic cinematography. According to the liner notes, "This new 4K digital restoration was undertaken by the Criterion Collection. The picture was originally released at 100 minutes in 1940 and cut down to 95 minutes for a reissue in 1948; no original camera negative survives for either version. The complete 100-minute version is presented here, created from a 35 mm nitrate fine-grain master positive stored at the Museum of Modern Art in New York. Because of damage, some scenes were replaced using a 35 mm nitrate fine-grain of the shorter version. Scanning of both film elements was done in 4K resolution..."

Though scenes taken from the alternate version are easy to spot due to their slightly softer and grainier texture, the overall presentation boasts excellent clarity and contrast, strong shadow delineation, and a nicely varied grayscale. Some exterior shots seem a tad over-exposed, but that's typical for the period. Rich blacks and bright yet stable whites anchor the image, costume fabrics are distinct, patterns resist shimmering, and sharp close-ups showcase the creases and faint scars on Bogart's face and natural beauty of both Lupino and Leslie. Fine details like road dust on Roy's car windshield and the rough-hewn contours of tree bark and mountain rocks are crisply rendered, and though a few stray threads occasionally pop up on the bottom of the frame, the picture looks remarkably clean. Without a doubt, High Sierra has never looked better on home video, which is great news for gangster and Bogart fans.

The liner notes state "the original monaural soundtrack was remastered form the 35 mm original soundtrack negative of the shorter version, stored at the Library of Congress in Washington, D.C., as well as from a positive track sourced from the Museum of Modern Art's fine-grain." The resulting LPCM mono track supplies clear, well-modulated sound throughout, but the intensity really ramps up during the climax. Sonic accents like screeching wheels, honking horns, wailing sirens, gunfire, motorcycle engines, and the rat-a-tat-tat of machine guns are wonderfully distinct, and a wide dynamic scale handles all the highs and lows of Adolph Deutsch's music score without a hint of distortion. All the dialogue is easy to comprehend and no age-related hiss, pops, or crackle disrupt the purity of this robust mix.

This two-disc set includes a delectable array of quality supplements that salutes the film, Bogart, and Walsh.

High Sierra remains a high point in Humphrey Bogart’s illustrious career. His breakout portrayal of a weary gangster on the run created an iconic persona that endures to this day, while director Raoul Walsh’s tough yet tender approach brings welcome warmth and sensitivity to a violent, often heartless genre. Criterion’s sumptuous two-disc set does this classic proud with an impressive restoration that features excellent video, robust audio, and hours of absorbing supplements, including Walsh’s own western remake of the film. In more ways than one, High Sierra scales the heights and comes very Highly Recommended.