Elvira's Haunted Hills is a delightfully macabre affair that pays homage to the romanticized horror period of Hammer Films and Roger Corman's AIP productions. Celebrating its 20th Anniversary, Scream Factory brings the cult favorite to Blu-ray as a single-disc Collector's Edition package featuring an excellent audio and video presentation and a healthy collection of bonuses. The overall package is Recommended for devoted fans of the genre icon.

Thirteen years after her big scream debut, Elvira (Cassandra Peterson) exposes herself yet again with another dreadfully campy tale for B-horror lovers in Elvira's Haunted Hills. For her second sleazy genre escapade, however, she lures audiences back to mid-19th century France where our lewd heroine is a can-can performer caught in the middle of a spookily mysterious family curse. Sadly, the story, which Peterson co-wrote with John "Jambi the Genie" Paragon, falls short of her first feature and isn't quite as memorable, which is not to say this low-budget, direct-to-video production isn't without some worthwhile moments. Elvira remains the same voluptuously cheeky goofball always at the ready to hurl risqué puns to the sneering, judgmental leers of uptight society. Besides, for obsessively devoted fans, the macabre TV hostess is always a delight to watch no matter the occasion or the size of one's . . . ahem, screen.

If her last adventure surviving the horrors of conservative suburbia works as an understated loving tribute to the B-movies of yore, then Sam Irvin's horror comedy is an unabashed homage to the period of Hammer Film productions and Roger Corman's adaptations of Edgar Allan Poe stories. After being driven from a village in Romania, Elvira and her maidservant Zou Zou (Mary Jo Smith) soon find themselves traveling on a creepy stagecoach to an even creepier castle at the top of nearby hills that are continuously immersed in a sea of fog. One of the funny recurring jokes is everyone screaming at the sight of Elvira when opening doors, as though in this universe where Christopher Lee and Vincent Price would fit right at home, our beautiful gothic heroine remains the odd one out. To the filmmakers' credit, they come up with a variety of clever ways to keep the gag going though a few are a bit much and eye-rollingly tiring. 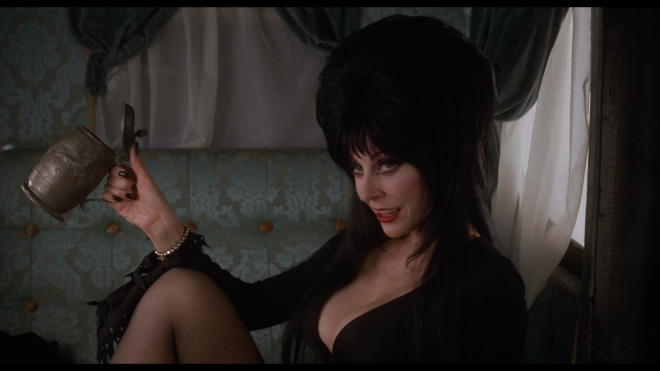 Nevertheless, the real silly fun comes from the impressively elaborate production design that borrows various elements from Corman's Poe-esque drive-in fare, such as The Haunted Palace and The Premature Burial. It's made all the more blatant when we meet Count Vladimere Hellsubus (an always wonderful Richard O'Brien, who does not seem to have aged one bit over the decades and has me convinced they are a real-life vampire). Sitting in an antique throne-like chair by a roaring fire and complaining about being sensitive to the slightest noise, the lordship immediately gives us intentionally weird The House of Usher and The Pit and The Pendulum vibes. Learning about his delicately feeble niece Roxanna (Heather Hopper) and Elvira resembling the Count's deceased wife Lady Elura piles on The Tomb of Ligeia ambiance mixed with a dash of The Black Cat and The Cask of Amontillado just to spice things up a bit.

In fact, looking at what inspired the filmmakers, it might be more accurate to say Elvira's Haunted Hills is a doting love-letter to all things Edgar Allan Poe with a few tender embraces for the legacy of Roger Corman and Hammer Films. Meanwhile, Mary Scheer's Lady Emma and Scott Atkinson's Dr. Bradley ride along to provide some necessary exposition and the unsurprising revelation at the end. A few of the jokes feel stale and arguably hackneyed although they are deliberately meant to be as such while others are actually quite clever and still make this genre fan giggle at the sight of them. Namely, the dumb farce with Nicholai (Remus Cernat) and the obvious ADR work dubbing his dialogue with a sexier English voice immediately brings to mind old European horror flicks from Elvira's TV hostess days. It's small, silly gags like this, along with the lovely Elvira, that ultimately make this low-budget fare such a fun watch.

Vital Disc Stats: The Blu-ray
Shout! Factory brings Elvira's Haunted Hills to Blu-ray as a single-disc Collector's Edition package under the distributor's Scream Factory line. The Region A locked, BD50 disc is housed inside the standard blue case with brand new reversible cover art and a sturdy, side-sliding cardboard slipcover. At startup, the disc goes to a static menu screen with the usual options along the bottom and music playing in the background.

The mistress travels to the haunted Blu-ray hills with a surprisingly gorgeous 1080p/AVC MPEG-4 encode, which was struck from a brand-new 4K restoration and remaster of the original camera negatives.

Boasting an excellent contrast balance with crisp, radiant whites, the HD transfer shows definite, well-defined lines in the costumes, furniture and throughout the stage production. Viewers can plainly make out the smallest cracks and flaws in the castle while individual blades of grass and leaves in the trees are razor-sharp from a distance, and every object decorating the background is distinct even in the extreme wide shots. Given its low-budget origins, some softer, poorly resolved segments are to be expected, and there are several instances of mild stair-stepping in the visual effects. However, the video appears nonetheless to be in outstanding condition and the many positives greatly outweigh the few negatives.

The presentation is also awash in a fine layer of natural grain that can occasionally look more pronounced in some sequences, but they never seem to distract from the overall pleasing results. Black levels are true and accurate with impressive shadow detailing in the darkest, poorly-lit interior sequences, providing the 1.85:1 with a satisfying film-like appearance and appreciable depth. The rest of the picture is bathed in richly saturated primaries, furnishing the silly B-horror tale with lush, electrifying blues and lurid, flamboyant reds. Adding to the cartoonish photography is a vibrant array of secondary hues, from the complementary fiery oranges and golden yellows of fire to few eye-catching splashes of royal purple, hot pink and sepia tans. Facial complexions appear healthy and natural while revealing every pore, wrinkle and minor blemish in the cast. (Video Rating: 86/100)

Elvira creeps into tomb theaters with a lovely, voluptuous pair of . . . ahem, DTS-HD Master Audio soundtracks that'll stir and arouse the corpses of the crypt. And as good and satisfying as the 2.0 stereo option was, I found myself ultimately enjoying and preferring the 5.1 surround track. It's not the sort to vibrate and disturb the dead per se, but imaging feels broad and spacious with various amusing background noises that flawlessly pan across the three front channels and into the off-screen space. The mid-range maintains sharp distinction and separation during the loudest segments with precise, well-prioritized dialogue from beginning to end, and the low-end is hearty but appropriate for providing the visuals with a good sense of presence and weight. Rear activity is rather quiet for the most part, but the occasional, albeit very subtle, sound effects bounces into the sides, nicely expanding the soundfield with satisfying effectiveness. (Audio Rating: 82/100)

The Blu-ray edition comes with a healthy selection of supplements.

Celebrating its 20th Anniversary, Elvira's Haunted Hills is a film so terrifying that it took lucky number 13 years since Elvira's big scream debut to make and scare audiences with laughter. Although not quite as strong or memorable as its predecessor, the low-budget, direct-to-video production is nonetheless a delightfully macabre affair, an unabashed homage to the period of Hammer Film productions and Roger Corman's adaptations of Edgar Allan Poe stories. Courtesy of Scream Factory, the cult favorite arrives on Blu-ray as a Collector's Edition package featuring an excellent HD video and a satisfying pair of DTS-HD MA soundtracks. With a healthy collection of bonuses to boot, the overall package is recommended for fans of the genre icon.