An artist grows distant from his new wife as an irrational horror of premature burial consumes him.

With 'The Premature Burial,' the complete eight-film series of Poe-inspired productions by legendary B-movie filmmaker Roger Corman are now available in high-definition. Except for this and 'Tales of Terror,' the remaining six can be found in the two Vincent Price Collection sets from Scream Factory because the Master of Menace only starred in seven of the Corman-Poe cycle of films. In fact, 'Premature' stands out from the rest, and is also notable, for being the only production during these years in which Price did not make an appearance. The story goes that Corman struck a deal with another studio and since the celebrated icon of horror was under exclusive contract with AIP, the director was forced to hire someone else for the lead. The original plan was to have Price star in all them. Of course, at the last minute, AIP reentered the picture with threats and lawsuits, but the production was already set to start shooting by then. So, the cherished and beloved actor was made to sit this one out.

Now, none of this is to discredit the performance of Ray Milland ('The Lost Weekend,' 'Dial M for Murder'), a splendid actor in his own right with a list of memorable, award-winning roles. He does a great job as the morose and seemingly paranoid Guy Carrell, an odd gentleman of the Victorian era with an unusual, sometimes frightening temperament and some rather queer behaviors. Price's absence can be felt in a few sequences, ones where we'd expect a bit more histrionics in the character's weird fascination with death. Essentially, what's missing is the campiness and the chewing of every scene, which is what distinguishes Price from other actors, such as Peter Cushing and Christopher Lee. Price does it with a grace that seems natural and effortless, every line and word is emphasized with such grave seriousness. When Milland tries to stress the most dramatic moments, his unblinking, drooping eyes wander off into the distance, chin held high with a faint frown. Any minute now, he's about to bite down on his clenched fist. 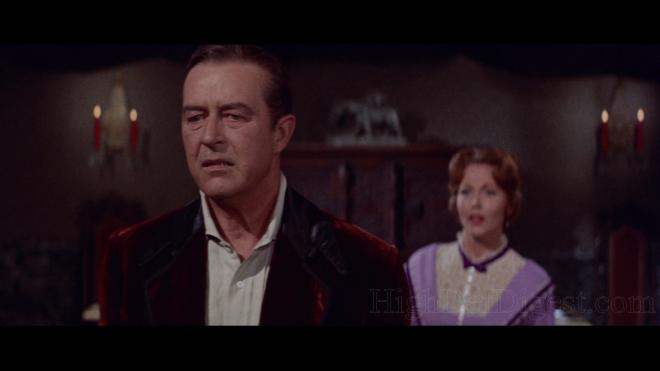 But this is not an attempt to make comparisons — although obviously, that seems exactly like what I am doing here. But no, this is just to show that Milland thankfully was not trying to mimic Price but was instead trying to sell the character and the objectively silly dialogue with as much dramatic flair as he knew how. And for the most part, he does a marvelous job. Like most male characters in any given Poe story, his Guy is strange, mostly reclusive man that suffers from a bizarre, often unexplainable ailment that seems to haunt him, both physically and psychologically, and his property. It's as if their sickness contaminates everything else around them, creating a disturbingly dark and sinister environment. Guy suffers from catalepsy, which has led to a debilitating phobia of being buried alive. And Corman and cinematographer Floyd Crosby do an outstanding job of making this a frightening possibility for the poor man. They quickly establish an ominous atmosphere, bathing every frame in an array of colors that contrast the gloomy moors and nearby cemetery permanently absorbed by a thick fog.

Familiar to fans of the Corman series of Poe adaptations, much of the exposition, along with the central plot, is told in a rather dramatic sequence and an intensely theatrical monologue that sets not only the tone but a larger mystery at hand. Guy explains his unbearable malady to Emily Gault (Hazel Court), a woman he recently broke up with via a letter. For shame, dude, for shame. Of course, she refuses to leave him in spite of his condition, so naturally, the two marry right away. However, once she starts seeing just how crazy he really is, doubts begin to grow, forcing her to find help from Guy's sister (Heather Angel) and a family friend Miles (Richard Ney). One of the film's best moments is when Guy demonstrates his above ground burial vault with the nifty contraptions and mechanisms designed for a way out, just in case someone confuses his cataleptic episode for a dead body. Everyone's uncomfortable reaction is understandable, but they did really have to make him blow the thing up. Even if they don't like, couldn't they keep it just because it's freaking cool.

This bizarrely dark but very subtle sense of humor is part of what makes 'The Premature Burial' such an enjoyable film within the Corman-Poe cycle. And Milland does an excellent job stepping in the shoes that were originally tailored for Vincent Price. Best of all is the script by Charles Beaumont, celebrated sci-fi and horror author known as well as for his stories featured in 'The Twilight Zone,' and Ray Russell, also a celebrated author. They included a deeper mystery that provides a wonderful twist ending that comes as bonus surprise for the last quarter of the film and an opportunity for Corman to really create some memorably creepy moments.

Kino Lorber brings 'The Premature Burial' to Blu-ray on a Region A locked, BD25 disc inside the standard blue keepcase. At startup, viewers are taken directly to a static main menu.

The third in the Corman-Poe cycle conquers death on Blu-ray with a great AVC-encoded transfer the best all previous available editions. From the looks of it, the high-def transfer was possibly created from a new remaster of the best available elements. However, the occasional, light splatter of white specks and the very faint yellowish hue that comes from age suggests that the source didn't receive the full restoration treatment.

Nevertheless, the picture comes with excellent definition and clarity. You can clearly make out the elaborate woodwork in the furniture, and the intricate threading and fabric of the Victorian costumes. Facial complexions appear healthy with visible details and lifelike textures in close-ups. Several moments, however, are poorly resolved and noticeably blurrier than others. Contrast and brightness are very well balanced with crisp, clean whites throughout and dark, penetrating blacks that provide the 2.35:1 image with appreciable depth. A good portion of the palette leans toward earth tones, but primaries are vivid and colorful while secondary hues are accurately rendered.

Although contained to the center of the screen, imaging feels fairly wide and spacious, delivering an excellent sense of presence and a great deal of warmth. Dynamic range is surprisingly extensive, exhibiting distinct clarity during the loudest moments, like the thundering crashes of thunder and the high-pitched screams of a couple characters. Even during the softer, quieter scenes, the listener can clearly make out the rustling of clothes, the jingling of trinkets and the faint movement of small objects. The musical score benefits the most from the upgrade with excellent fidelity and detailing in the orchestration, aided by a throaty, palpable low-end that gives the presentation some welcomed weight. And amid all this, dialogue reproduction is well prioritized and intelligible.

'The Premature Burial' is most notable for being the only production during Roger Corman's years of adapting Poe's stories in which Vincent Price did not make an appearance. The film, however, should also be remembered for being a well-made horror production with lots of clever moments and a sly comedic feel immersed in an ominous mystery that surprises in the end. The Blu-ray arrives with a strong audio and video presentation, but with a very light assortment of supplements, fans are more likely to be tempted. Nevertheless, fans of the Corman-Poe cycle of horror films will want to purchase right away to complete their cult collection.

Sale Price 14.99
List Price 29.95
Buy Now
3rd Party 17.98
In Stock.
See what people are saying about this story or others
See Comments in Forum
Previous Next
Pre-Orders
Tomorrow's latest releases