Cassandra Peterson's Elvira has not only haunted my imagination since childhood but is also largely responsible for the person I am today. And while we're on the subject, the same can be said of The Munsters and The Addams Family reruns, which always occupied my weekend afternoons. But my Saturday late-night viewings were religiously devoted to Elvira's Movie Macabre program where she nurtured my love for B-movie horror and sci-fi. Her witty, double entendre commentary injected a layer of enjoyment and appreciation for long-forgotten "bad movies." Essentially, she inspired my fervent appetite for seeking out more unconventional, low-budget productions that most mainstream moviegoers would deem terrible or unwatchable. That same hunger for collecting the affectionately regarded "schlock horror" continues to this day as an insatiable craving, to the point that all things strange and spooky now decorate my house.

Needless to say, when I was a young teen, hearing of Elvira making her feature-length debut absolutely thrilled me. Sadly, due to a very limited theatrical run, I missed out on seeing Elvira: Mistress of the Dark in cinemas, so I patiently waited for the eventual VHS release the following year. After popping in the tape and pressing "Play" on the VCR, I instantly fell in love with the movie from the moment it opened on a bizarrely goofy self-aware gag about Peterson being a TV horror hostess for a shoddy, two-bit television station. And this opening still makes me laugh as it only keeps getting better when she announces her dream of performing her own Las Vegas show. The idea that our eccentrically macabre heroine longs to be the main attraction in Sin City and that this is the extent of her aspiration for fame hilariously sets up the tone and theme of the plot, which Peterson co-wrote with TV writer Sam Egan and John "Jambi the Genie" Paragon. 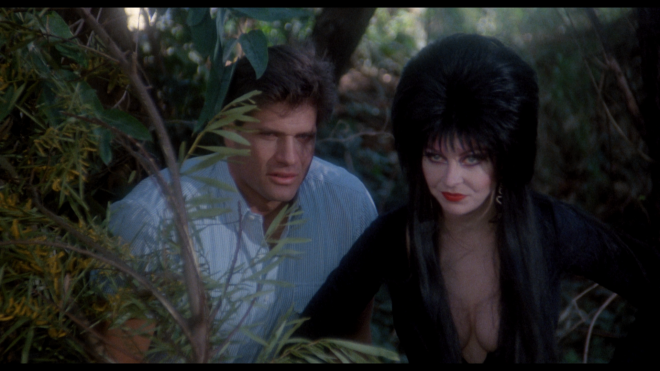 The cleverly subtle fourth-wall breaks, the ridiculously cheesy puns and various other innuendoes are perfectly in line with the humor and spirit of the original show, which had just ended two years prior. They range from the blatantly obvious, such as Elvira looking directly at the camera when pointing out the convenient timing of learning she is the beneficiary of her Aunt Morgana's estate, to the craftily implied, like the story beginning with the show's abrupt cancellation. Some of my personal favorite nods are the homage to The Munsters on the "Welcome To Fallwell" sign and the double whammy reference mixing Flashdance with Carrie. Of course, we can't talk about this movie without also mentioning the wonderful Edie McClurg as the delightfully villainous Chastity Pariah, Daniel Greene as the male version of a blonde bimbo Bob, and the aphrodisiac pot luck picnic for the Morality Club arguably being the production's most memorable scene.

Of course, Elvira: Mistress of the Dark is not without its faults nor is it the sort of horror comedy most would immediately be tempted by. Admittedly, some gags are a bit of the low-hanging fruit variety or eye-rollingly silly, such as Elvira confusing a large snake for Bob. Great-Uncle Vincent Talbot (W. Morgan Sheppard), which is another fun allusion to a pair of screen legends, and his two dimwitted goons (Jeff Conaway and Frank Collison) are an over-the-top necessity to keep the plot moving, but they can also feel like superfluous baddies that momentarily spoil the story's pacing. However, this is still in keeping with the film's larger theme, which is a tongue-in-cheek and cleverly understated homage to shlock B-horror movies. And just as many of them stressed a schmaltzy, trite morality, this delightfully campy comedy wears its theme prominently on its sleeve — a spookily silly tale about valuing individual expression against an uptight, Reagan-era society. In a world of reactionary conservative values, be an Elvira, Mistress of the Dark.

Vital Disc Stats: The Blu-ray
Courtesy of Arrow Video, Elvira: Mistress of the Dark moves into the Blu-ray neighborhood as a single-disc, standalone collector's edition. The Region A locked, BD50 disc is housed inside a clear keepcase with an attractive slipcover, reversible cover art and a 36-paged color-photo booklet, which features a foreword by Sam Irvin and a pair of insightful essays. At startup, viewers are taken directly to an animated screen with the usual menu options, full-motion clips and music playing in the background.

The Mistress of the Dark unceremoniously moves into the Blu-ray suburbs, flaunting about the neighborhood with a massively solid 1080p/AVC MPEG-4 encode.

According to the accompanying booklet, the 35mm interpositive elements were restored and remastered in 2K for this release. However, the back of the cover art states those elements received a 4K scan. But whatever the case may be, Elvira has never looked this good on any home video format, bursting at the seams with sharp detailing of the town's quaint neighborhood, the exterior of buildings and the interior of Aunt Morgana's beautifully creepy Victorian house. Of course, the HD video comes with its fair share of soft, poorly resolved moments, and that's to be expected in a vintage, low-budget production of this caliber. But overall, the elements appear to be in prime condition and awash in a fine layer of natural grain, showcasing excellent, spot-on contrast and surprisingly stable inky rich black levels with strong delineation in the darkest shadows and murkiest corners. Primaries are vibrant and richly saturated, adding a wonderfully comical pop to the cartoonish silliness, and a full-bodied assortment of secondary hues bring the visuals to life while facial complexions appear healthy and revealing during several close-ups.

Over thirty years later, Elvira is just as lovely as ever, if not more so now in HD! (Video Rating: 78/100)

The beloved cult favorite causes a commotion in home theaters with a hugely satisfying uncompressed PCM 2.0 stereo soundtrack, making it a brilliantly wonderful complement to the zany horror visuals.

Bringing the drolling creeps along with the horrific silliness, the lossless mix keeps the action busy with plenty of background activity flawlessly bouncing between the three front channels, generating a wide and welcoming soundstage. Imaging consistently feels spacious and full of warmth while also exhibiting excellent definition and distinction in the mid-range, allowing for great clarity in the music and during the loudest segments. Vocals are precise with excellent intention in the many performances. Bass feels accurate and appropriate, providing some appreciable weight and mild impact to the visuals. (Audio Rating: 82/100)

Since first seeing it on VHS, I instantly fell in love with Elvira: Mistress of the Dark, which arguably had a great deal to do with my predilection of Cassandra Peterson's macabre TV hostess of a late-night horror movie program. Nevertheless, the cleverly silly tongue-in-cheek homage to shlock B-horror movies remains a personal favorite campy comedy that still delivers the laughs over thirty years later. Courtesy of Arrow Video, the cult favorite moves into the Blu-ray neighborhood with excellent HD video, a satisfying uncompressed PCM stereo soundtrack and a healthy collection of supplements. The overall package is recommended.