Stranger on the Run

Henry Fonda goes toe-to-toe with Michael Parks in Don Siegel’s excellent 1967 made-for-television film Stranger on the Run. A simple production is elevated by tight lean storytelling and committed performances from the main cast. On Blu-ray for the first time from Kino Lorber Studio Classics with an excellent A/V presentation. Siegel fans and Western aficionados shouldn’t miss this classic. Recommended

Recently paroled drunk drifter Ben Chamberlain (Henry Fonda) just landed in a rough and tough railhead town looking for a woman called Alma. No one seems to know what happened to her - or where she went. But when the woman turns up dead, the town’s cruel chief deputy McKay (Michael Parks) and his band of cutthroat agents pin Ben as guilty of the crime regardless of innocence. Giving Ben a horse and a head start, McKay and his men go on a hunt.

Don Siegel was one of those rare directors that could actually polish a turd and turn it into gold. From westerns to thrillers to b-movie level science fiction, Siegel had a gift for finding the best aspects of any script and give his assembled cast room to embody fully developed characters. Simple beats tell you everything about the characters without bogging the pace down with needless exposition. With any film once he establishes the rhythm, the film moves forward constantly building steam.

Such is the case with Stranger on the Run. Written by frequent Siegal collaborator Dean Riesner, Siegel finds an unlikely hero with Henry Fonda’s Ben Chamberlain. As a drunk hopping boxcars, Ben quickly finds himself in over his head. He was asked to do a simple favor to find a girl and help her get out of town. You come to learn later on why he was willing to take on that task. We meet Michael Parks’ McKay struggling with his boss to maintain some sense of law and order - even with the men at his disposal. Cruelty can only contain cruelty for so long before things get out of hand. 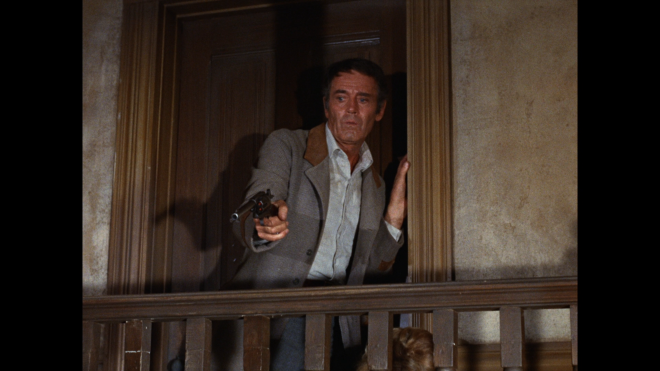 While a made for television and originally aired on NBC, the film doesn’t look cheap or off the cuff. Siegel makes great use of the scenic isolated locations and some recycled sets to give the feeling of a grand large-scale production. The two primary shootouts may be a bit stilted due to content restrictions, but they’re active and engaging. It’s another hallmark of Siegel’s style to make the most out of simple setups and let the editing punch up the excitement right up to the final standoff. 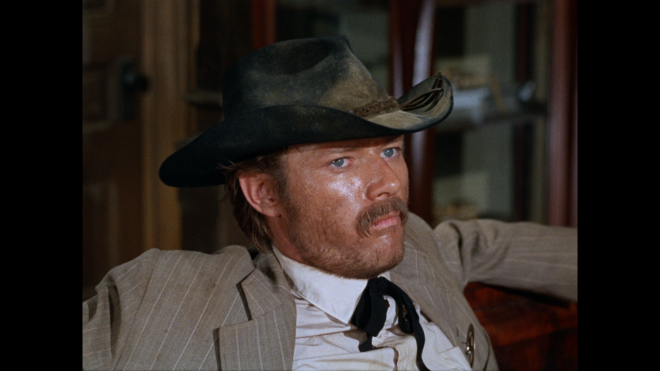 Siegel had a great hand at westerns. Even contemporary movies like Coogan’s Bluff and Edge of Eternity fit nicely within the confines of the genre. Stranger on the Run probably isn’t his best and that’s largely due to format. It’s a very good and enjoyable film, but I’d argue broadcast television content restrictions holds it back. There are a lot of adult themes that aren’t fully explored. The happenings and circumstances of Madlyn Rhue’s Alma Britten, her beating, and her death are only given a cursory exploration. Similarly, for Anne Baxter’s Valverda Johnson. Her character has a backstory and sexual energy that’s only thinly alluded to - especially whenever she shares any screentime with Michael Parks. There’s something more to that story and why she doesn’t want her son riding with him that we’re just not seeing here. Without the content restrictions, I feel like these examples and other moments of the film could have been more thoroughly explored. Not that they need to be expanded at length, but more in the vein Siegel wouldn’t have to dance around the subject so haphazardly.

Even confined within the structure and limitations of a broadcast network, Stranger on the Run is a slick Western with some great performances. Aside from a very few instances Henry Fonda never really got to break his clean-cut mold during his long career. While he played outright evil in Once Upon A Time in the West, his Ben Chamberlain is a good man but hardly a hero. I’m not used to seeing Fonda drunk and on his heels, but it’s a great turn giving the actor room to explore a wounded character. Michael Parks is well, Michael Parks in all the best ways. His slim slurred speech cadence and his steely-eyed glare bring menace to the role. He constantly looks and sounds like a mountain lion ready to kill anything that crosses him. 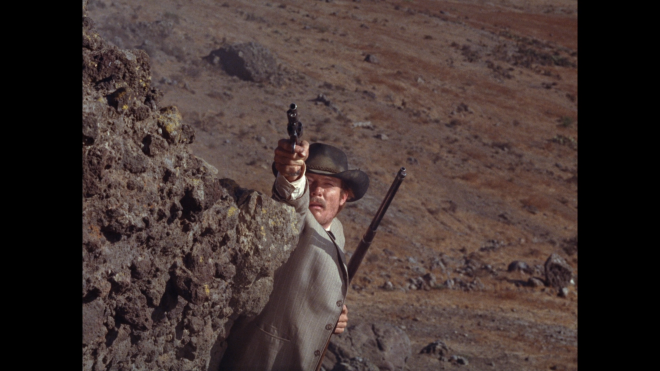 While she’s not given a lot of material to work with, Anne Baxter does a fine job as the woman caught in the middle of a small personal war. Of the supporting cast, the standout is Dan Duryea as the weathered Hotchkiss. I’ve seen Duryea in plenty of Westerns but he always surprises me because I’m so used to seeing him in gangster movies as the greasy slimeball. The friendly guy with morals is a strange suit for him to wear but he does well with it in one of his last performances. Toss in great turns from Sal Mineo, Bernie Hamilton, and Tom Reese - among other memorable genre faces - and you have a solid cast of great actors.

Stranger on the Run was a film I’d long heard about but never managed to make the time for. I certainly enjoyed it, I’m glad it’s out on Blu-ray and a part of my collection, but it’s not a top-of-the-pack show for me. Given the pedigree maybe I rode in with some high expectations. It’s great for Henry Fonda and Michael Parks and well made for what it is and has to offer, but as far as Siegel goes - he made better westerns before and after this one. Again, I get the feeling that had this not been a television movie and given more room to explore themes and ideas it’d be a much better film than it is. As it stands, it’s a great way to spend 97-minutes with a strong cast of actors.

Vital Disc Stats: The Blu-ray
Stranger on the Run arrives on Blu-ray thanks to Kino Lorber Studio Classics. Pressed on a Region A locked BD-50 disc, the disc is housed in a standard keepcase with an identical o-card slipcover. The disc loads to a static image main menu with traditional navigation options. 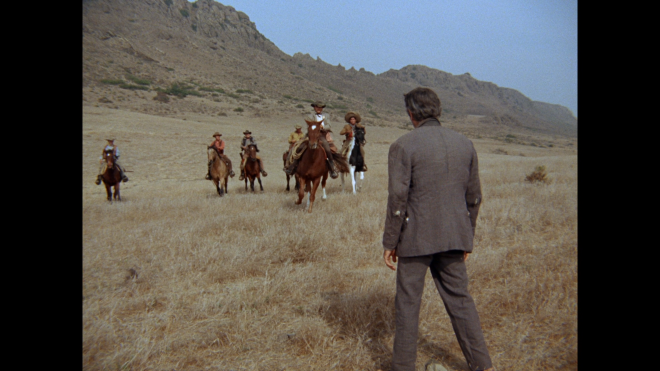 Sourced from a new 2K scan, Stranger on the Run offers fans an impressive 1080p 1.33:1 transfer. With a natural layer of film grain, the image boasts appreciable details throughout. Michael Parks’ amazing mustache, Henry Fonda’s tattered wardrobe, Anne Baxter’s home, every aspect of the production is on display. Colors are bold giving blues and reds plenty of room while favoring the yellow/brown earth tones. Skin tones are healthy and accurate. The source elements are in great shape with only some slight speckling surrounding some of the optical transitions and fades before the commercial breaks. There are a couple of shots that look like they were zoomed in during post-production, the grain structure thickens a bit and becomes a bit noisier, but there are only a few very brief instances of that. All in all, this is a problem-free and impressive transfer. 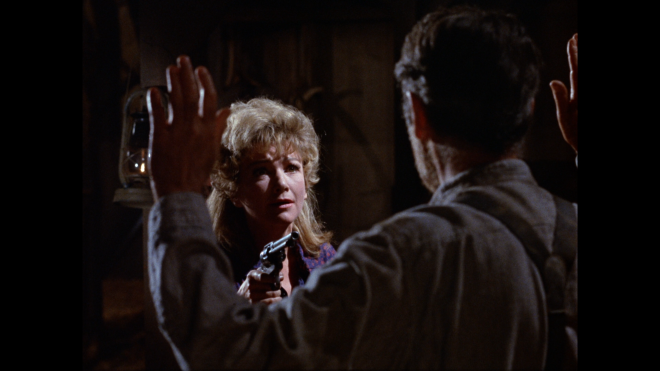 Stranger on the Run comes packed with a robust DTS-HD MA 2.0 mono audio track. At the outset, I’ll say the only issue isn’t a technical one at all but indicative of one particular actor’s delivery choices. If you’ve seen any movie with Michael Parks you know he has a particular speech cadence and he’s especially thick with this one. There are some segments where you just barely understand a word he says compared to the other actors who sound perfectly fine. With that in mind, you may want to turn the volume up another notch or two. Otherwise, this mix is great. Sound effects offer some excellent atmosphere - the canyon shootout is a highlight. Scoring by Leonard Rosenman sets the stage nicely. Again aside from Michael Parks’ line readings, this mix is terrific. 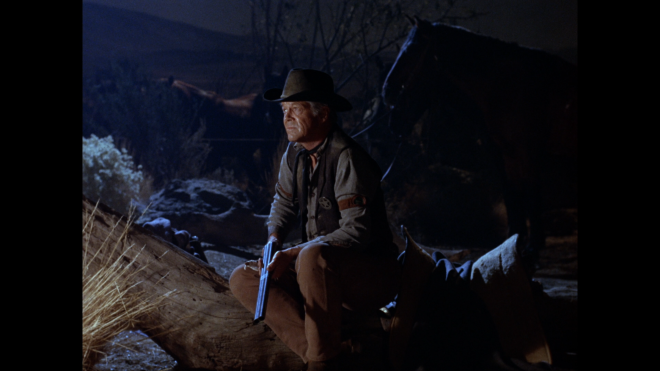 Stranger on the Run doesn’t score a terribly robust assortment of bonus features but the Gary Gerani audio commentary is a nice piece to listen through. After that, it’s KLSC’s standard collection of related theatrical trailers to round out the extras. 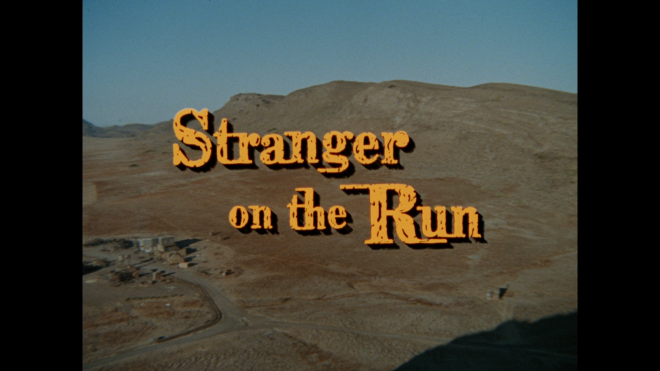 While it’s not the best western, nor is it the best outing from director Don Siegel - Stranger on the Run is a solid made-for-television film. I felt broadcast content restrictions held back some of the themes and ideas of the story, but the great performances from Henry Fonda, Michael Parks, Anne Baxter, and Dan Duryea are an asset. Coupled with Siegel’s efficient storytelling prowess, this is an entertaining and engaging watch.

Kino Lorber Studio Classics delivers Stranger on the Run to Blu-ray with great results. The new 2K scan looks great and the audio crackles - just watch out for those Michael Parks scenes! Bonus features are slim, but the audio commentary is a good listen. If you’re a fan of the genre this isn’t the brightest and best, but it’s worth the time. Recommended