Sergio Leone directed seven films in less than twenty-five years - five of them among the best westerns ever made featuring steely-eyed villains, iconic heroes and a host of colorful characters. A Fistful of Dollars, For a Few Dollars More, The Good, The Bad, and The Ugly, Once Upon A Time in the West, and Fistful of Dynamite (A.K.A. Duck You Sucker). Each film is epic in its own sense of characters and scale making them cinematic achievements to be devoured. Kino Lorber Studio Classics collects all five films into one neat package in Sergio Leone Westerns. These are amazing films and if you've been waiting for an all in one package collection - it probably won't get much better than this. Highly Recommended.

As each of these films is already available on Blu-ray we've done extensive coverage about what we thought of the films, their video transfers, audio mixes, and the assortment of bonus features - if any - available. Kino did not author a new disc for Once Upon A Time in the West, it's the exact same Paramount issued disc from 2011.

Read our For a Few Dollars More Review - 5/5

Read our The Good, The Bad, and The Ugly: 50th Anniversary Edition Review - 5/5

Each of these movies is a classic in its own right and maintains a dedicated legion of fans. Some will swear one film is better than the other, but it's universally agreed upon that they're all impressive pieces of filmmaking. I've always appreciated the fact that Leone's little spark into Spaghetti Westerns began by infamously ripping off Akira Kurosawa's Yojimbo. After reaching a settlement, Leone was free to do what will with his Man With No Name in a star-defining role for Clint Eastwood.

Leone even bucked his original Fistful producer when making the "sequel" For A Few Dollars More. It took Italian courts to determine (how is beyond all reasonable thought) that Clint Eastwood was playing two distinct characters… that wore the same clothes... bilking Leone's original producer out of profits from the second film. The Good, The Bad, and The Ugly is really Leone's turning point as a filmmaker no longer confined to tell narrow stories instead opting for lengthy sprawling and enthralling epics. That trend continued with his first American made western Once Upon A Time in the West that made incredible use Monument Valley, Utah and locations in Mexico as a backdrop. 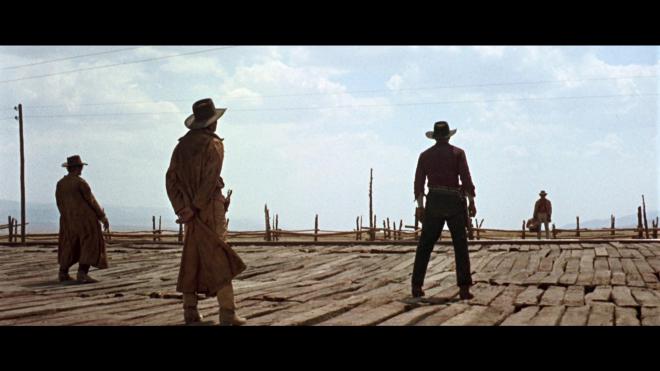 A Fistful of Dynamite is probably Leone's oddest entry. A production nightmare, that Leone had asked a series of directors from Sam Peckinpah to Peter Bogdanovich to his own assistant to direct before he was ultimately forced to step behind the camera himself. Fights with demanding stars and production issues made it his most tumultuous film - but in a tall tale of an Irish IRA explosives expert and a Mexican bandit caught up in the revolution is probably the director's funniest film. It doesn't quite stack against its predecessors, but it's an entertaining jaunt nonetheless.

Is the Sergio Leone Westerns collection worth it? Yes - but only if you haven't bought any of Kino's previous releases or Paramount's disc of Once Upon A Time in the West. This five-disc set also omits the International Cut disc for The Good, The Bad, and The Ugly from Kino's previous release. This may be a dealbreaker for some out there. I don't particularly mind since I'm not a fan of the longer version of the film. The only real loss is all of the excellent new and archival bonus features that were present on that disc. But if bonus features aren't your thing, you're getting the better version of The Good, The Bad, and The Ugly with what I'd call the best of the bonus features of that set.

While it would have been great to get a full 4K UHD Blu-ray set of - at the very least - The Man With No Name trilogy, I've come to understand that it would be a logistical and technical nightmare to pull off with the transfers currently available. In order for that to be done right, it would need to be a square one restoration complete with new color timing for HDR at an incredible expense few niche studios are in the position to afford. As is, the Sergio Leone Westerns collection is a hell of a set bringing together Leone's five amazing contributions in one lean mean package.

Kino Lorber Studio Classics delivers Sergio Leone Westerns to Blu-ray essentially repacking all of the already available discs into one neat little package. Housed in a five-disc hard plastic case - each disc gets its own tray to occupy with identical cardboard slipcover artwork. Each disc loads to a static image main menu with traditional navigation options.

Again, as these are rereleases of discs already available, refer to our individual reviews for complete A/V analysis.

Read our A Fistful of Dollars Review - 4/5

Read our The Good, The Bad, and The Ugly: 50th Anniversary Edition Review - 4/5

Read our A Fistful of Dynamite Review (A.K.A. Duck You Sucker) 3/5

Read our The Good, The Bad, and The Ugly: 50th Anniversary Edition Review - 5/5

Read our A Fistful of Dynamite Review (A.K.A. Duck You Sucker) 3/5

Bonus features for the Sergio Leone Westerns collection is pretty damn impressive when you consider just how much material Kino provided for their releases as well as what Paramount delivered for Once Upon A Time in the West. While the collection of bonus features isn't quite complete because as previously mentioned, the International Cut of The Good, The Bad, and The Ugly was left out of this set. While that material is pretty good, I'd argue you're getting the better materials on the US Theatrical Cut disc anyway. All in all between these five films you're getting a hell of a lot of bonus material well worth picking through.

A Fistful of Dollars Bonus Features:

The Good, The Bad, and The Ugly Theatrical Cut Only Bonus Features: 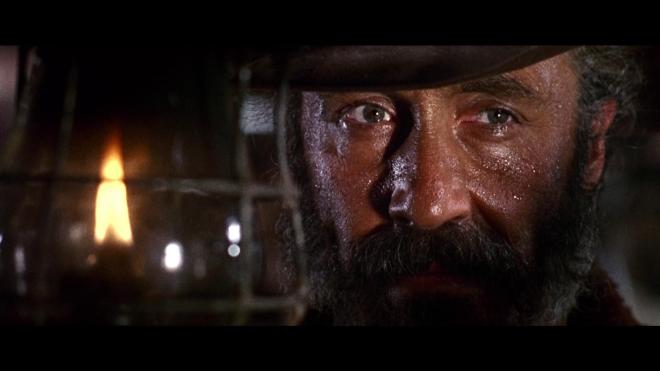 Once Upon A Time in the West Bonus Features:

A Fistful of Dynamite Bonus Features:

The Sergio Leone Westerns collection from Kino Lorber Studio Classics represents one of the best cinematic storytellers' finest efforts. Leone defined Spaghetti Westerns setting the bar so high that few other filmmakers of his era could match his talent. In the process of crafting five incredible movies, he launched the careers of numerous talented actors and actresses while crafting intricate character pieces with wild witty stories to inhabit. Many people have their favorites in this collection and it's wonderful to have each film finally together in one neat little package.

Each film within the Sergio Leone Westerns Collection has already been released by Kino or Paramount - so nothing new has been added here. The one outstanding difference between what's already available and this set is this set does not include the International Cut of The Good, The Bad, and The Ugly and thus that collection of bonus features. I wouldn't call this a deal-breaker as in my opinion the US Theatrical Cut is the superior version. With that caveat in mind, this is still an outstanding collection of films modestly priced offering great A/V presentations of each film with a substantial bonus feature package to match! If you already own these releases, you're all set. If you haven't sprung for them yet - now's the perfect opportunity to get all in one shot. Highly Recommended.