The Joker’s notoriously insane and wildly unpredictable - now-former sidekick/girlfriend - is out to prove she’s just as diabolical and crazy as any man or monster in Gotham. Harley Quinn The Complete First and Second Seasons leaves streaming and makes landfall on Blu-ray thanks to Warner Archive in a three-disc set. With a great A/V presentation, if you don’t want to maintain an HBOMax subscription for all of the DC Universe shows, this is a solid package. The show may not be for everyone, but if you don’t mind crass humor and over-the-top violence, it’s damn good fun. Recommended

Mr. J (Alan Tudyk) and his number one sidekick/lover Harley Quinn (Kayley Cuoco) have had a tough relationship. After Joker leaves her to rot in Arkham for over a year, she’s finally out on her own with help from the plant-loving Poison Ivy (Lake Bell). Now Harley has the chance to prove that she's not only crazier than the Joker and better than anyone in the Legion of Doom but deserves to be the one running things in Gotham. The only problem is Batman (Diedrich Bader), Commissioner Gordon (Christopher Meloni), and every other evildoer in the city wants to stop her. 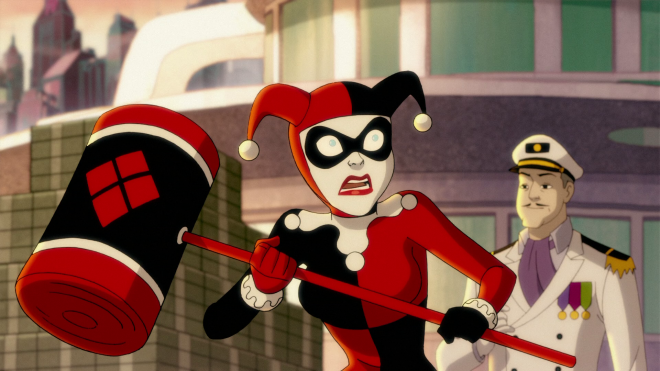 When the whole DC Universe streaming service was launched, I was excited by projects like Titans, Doom Patrol, and the ill-fated Swamp Thing - but I wasn’t going to sign up for yet another streamer to get a handful of shows. Shure, you can read 25,000+ comics, but again, I didn’t feel it was worth it. An adult animated cartoon Harley Quinn certainly wasn’t the draw to entice me to give it a whirl. Thankfully with the launch of HBOMax and a relatively inexpensive add-on to my Hulu subscription, all of the DC Universe Shows moved over making the long game of catchup easy to play.

Even then, I just wasn’t sold on the idea of a foul-mouthed adult-themed cartoon. Maybe it was the leftover lousy taste from the DC Animated Batman: The Killing Joke that was keeping me away. A few weeks ago I finally gave Harley Quinn a shot - and I’m glad I did. What I thought would be a small curiosity turned into a binge session. One episode quickly turned into four or five at a time. It’s crass, it’s over-the-top, it’s a bit on the simple side - but it’s damn funny.

After reading comics for the better part of thirty years there’s something about seeing the characters you grew up reading being completely insecure dopes that was refreshing. Nothing about this show is to be taken seriously. It’s Harley Quinn unleashed in a world full of odd characters with their own oddball eccentricities. They’re small, they’re petty, and their egos are horribly fragile. Even Batman seems bored by the routine with Commissioner Gordon literally going out of his mind. Whenever anything bad happens in Gotham, the people are apathetic. Scarecrow gas attack? Eh, that’s just like every other Monday. Mr. Freeze trying to encase the city in ice? That’s your average daily commute - just put on the snow tires and give yourself extra time. It’s a fun world for this version of Harley Quinn to live in and take center stage.

While I’ve liked Margot Robbie as Joker’s lovable “Harls,” the films Suicide Squad and Birds of Prey: The Fantabulous Emancipation of One Harley Quinn just… weren’t good. As I look forward to James Gunn’s The Suicide Squad to hit theaters and/or HBOMax, I feel like we’re in a “Fool me once, shame on...shame on me...Fooled can’t get fooled again” scenario with her live-action incarnation. Where those first two live-action movies were just barely watchable, this Harley Quinn is re-watchable. Harley was brought to brilliant life in Batman The Animated Series. She was so popular that she made her way to the comics that inspired the characters and world she inhabits. For nearly 30 years she’s been a fan-favorite mainstay. We’ve seen her hit new highs and lows and always loved her. But she’s best animated and I have to tip my hat to Kaley Cuoco for not trying to ape Arleen Sorkin’s high-pitched squeaky voice. Cuoco does her own thing here and it’s a bit refreshing. The rest of the voice cast is excellent with Lake Bell playing the eternally frustrated Poison Ivy with Alan Tudyk delivering an excellent Joker as well as Clayface and a slew of other small parts. Ron Funches’ King Shark is a hoot and J. B. Smoove’s Audrey II-inspired Frank the Plant is always good for a gag.

I went into Harley Quinn expecting a rough ride that I’d jump off immediately. After burning through the series once, I’m well into my second round now. The 22-minute episodes move fast and with just enough connection for each season to have a throughline but avoid getting bogged down in story bloat. The A-Story almost doesn’t even matter most of the time. As an audience member, you’re there to kick back and enjoy the chaos. Back in September 2020, Warner Bros. announced that a third season was a sure thing. Hopefully, with this Blu-ray release a premiere date will be announced sooner rather than later.

Vital Disc Stats: The Blu-ray
Warner Archive picks up the physical media duties for Harley Quinn delivering a three-disc two-season set. Pressed on three Region Free BD-50 discs, the discs are housed in a sturdy three-disc case with each disc getting its own tray to rest. The discs open to static image main menus. The frustrating thing is the seasons aren’t divided on the discs, Season One ends on Disc 2 and then Season Two starts on that same disc and finishes on Disc Three.

Harley Quinn lands on Blu-ray with a pleasing 1.78:1 1080p transfer for each episode. While the streaming presentations for this show have always looked good, at least through the Apple 4K, I have to give the edge to the discs. Every now and again on streaming the image would display some blocking and compression issues during quick camera panning and action sequences. On disc, that doesn’t seem to be an issue. Colors are similar to each other and lines are just as crisp. But I will give the disc bonus points for image depth and black levels. The disc versions feel like there’s more of a three-dimensional presence than the HBOMax streaming was able to replicate. Blacks also take on a more desirable inky presence. These differences may be very slight, but enough to give the physical media release an edge.

Each episode of Harley Quinn also comes with a robust DTS-HD MA 5.1 audio mix that’s comparable to the streaming Dolby Digital 5.1. Dialog is clean and clear throughout. There’s plenty of action to keep the surrounds working at all times - especially whenever there’s a large crowd or action sequence. Explosions kick a nice rumble in the subwoofer. Scoring is on point without overpowering the mix. Flipping between the disc and streaming, there’s not a huge difference really. The edge I give the discs is that I didn’t feel like I had to have the volume up as high as streaming. I could roll it back to around 40 or 45 on my receiver where streaming I had to keep it over 50 for the same impact.

Sadly, there aren’t any bonus features for this release of any kind. No voice cast interviews, no audio commentaries. Not even trailers for other DC Universe titles. Zilch-o-nadda.

Harley Quinn The Complete First and Second Seasons may not be the greatest comic adaptation ever - but it’s damn fun. Harley’s manic hijinks are captured with some great animation and a terrific voice cast with some clever writing that leans into the absurdity of the world of Batman’s Rogues Gallery of colorful villains.

If you don’t want to maintain an HBOMax subscription to get all of the DC madness, Warner Archive delivers the series to Blu-ray with a great A/V presentation. It’s a bit frustrating the seasons are smashed together without clear Season One / Season Two start and stop points and the lack of bonus features is a bummer. However, if you want to have this one on your shelf, this is the best it’s going to get. Recommended.