Everyone's favorite Dark Knight rises from DVD to Blu-ray with Batman: The Complete Animated Series. This monster 12-disc set contains all original episodes of the series along with the two companion films, Batman: Mask of the Phantasm and Batman & Mr. Freeze: SubZero. The restoration work of the original episodes is magnificent. The new audio mix gives plenty of sonic action to each episode. And the bonus features package is an impressive undertaking, offering fans hours of content. Packed with three Funko Mini-Pops of Batman, Joker, and Harley Quinn and a set of lenticular stills, this really is The Complete Package. Highly Recommended.

I wasn't born a Batman fan, I was made one on the day my parents took me to the theater to see Tim Burton's Batman just ahead of my 7th birthday. From the opening movements of that movie's iconic score and that first rooftop fight with the two thieves, I became an instant Batman fan. I immediately stopped reading Spider-Man comics and went full on die-hard Batman comic collecting. Didn't matter if the issue was old or new, I bought it. Once Batman Returns left theaters and Warner Bros. announced Batman: The Animated Series, I was glued to my television set after school eagerly awaiting the two-episode premiere. 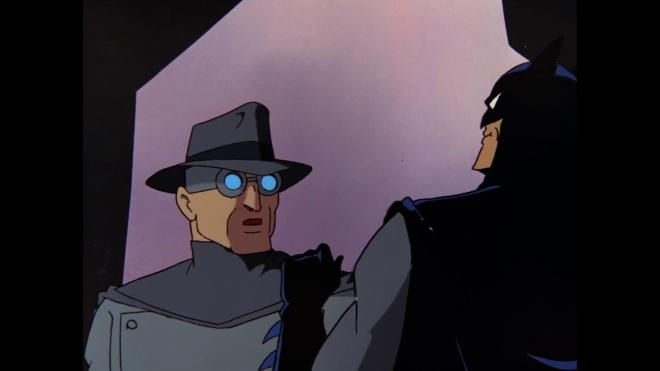 The first time Danny Elfman's rejiggered theme started playing against the neo-noir deco animation styling, I knew this show would be something special. And man, that first time Man-Bat appeared on my TV screen was probably the first time I let out what I now affectionally call "nerd squeals." The sound of pure joy and excitement that simply can't be contained as you witness a character come to life in a way that you'd only previously experienced in single comic book frames. And that's how things would go for me. Each week a new episode premiered and I would be there with my after-school snack waiting to devour another adventure producer Brice Timm cooked up with his principal voice cast of Kevin Conroy as Batman, Efrem Zimbalist Jr. as Alfred, Robert Hastings as Commissioner Gordon, Loren Lester as Robin, Robert Costanzo, as Harvey Bullock. That says nothing of the incredible guest cast with Mark Hamill's Joker, Adrienne Barbeau as Catwoman, Richard Moll as Two-Face and not to mention Arleen Sorkin's now iconic Harley Quinn. There's a good reason why they keep coming back to this voice cast for animated films and video games - they're perfect! 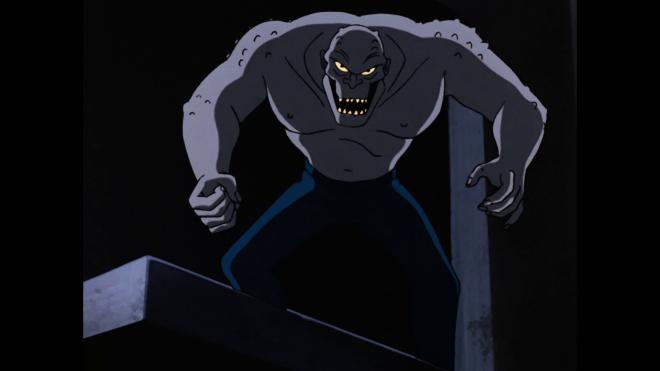 As the quality of the live action movies quickly dwindled, The Animated Series became all the more important and treasured. I frustratingly staggered out of Batman Forever and later Batman and Robin wondering if no one developing those movies even bothered to watch The Animated Series, let alone read any of the comic books in order to screw up so many iconic characters so badly. When Batman: Mask of the Phantasm and Batman & Mr. Freeze: SubZero came out, they were like a balm for the terrible cinematic burn of those last two live-action films before the franchise underwent its reboot Batman Begins. 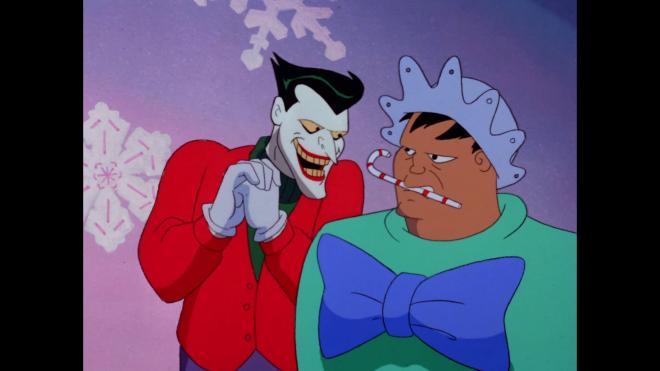 To this day, I am amazed at how well Timm and company were able to pluck iconic characters and many obscure characters out of the comics, give them their own unique spin while staying true to their roots. Clayface, Poison Ivy, Scarface, the Penguin, Killer Croc, Bane, let alone adding to the heated fan debate and confusion about pronouncing Ra's al Ghul's name correctly while maintaining his backstory!

My absolute favorite episode is "Beware the Gray Ghost," featuring a guest voice appearance by Adam West as an aged iconic superhero actor. There were many, many great episodes throughout the series, but this one still gets me a little emotional every time. And it was awesome watching it all over again in HD. Now that Mr. West is no longer with us, it became even more poignant and impressive how respectful this series was to the long history of Batman.

It'd been a couple years since I last took a look through The Animated Series. As Warner Archive began releasing Mask of the Phantasm and SubZero on Blu-ray I was very tempted to buy those and then cut my losses and pick up the series on DVD. I honestly never thought it would come to Blu-ray, and considered myself already very lucky that Batman '66 made it to Blu-ray at all. Now it's here and I couldn't be happier. With over 40 hours of content, I've got several days of gleeful nostalgia-infused binge watching ahead of me.

[NOTE: Episodes are in production order, not broadcast premier order. ]

Batman: The Complete Animated Series finally makes its long-awaited Blu-ray debut courtesy of Warner Brothers in a striking 12-disc Blu-ray set comprised of the television show along with the Warner Archive discs for Batman: Mask of the Phantasm and Batman & Mr. Freeze: SubZero. The outer case is a rather flimsy, easily dented and damaged paper box that holds the set together with the three exclusive mini Funko Pop figures of Batman, Joker, and Harley Quinn, the seven 3D lenticular stills, and the Blu-rays. Thankfully you don't really need to hold onto the paper outer box if you're intending to keep everything out on display, the Blu-rays have their own attractive black and red box that sits nicely on the shelf without taking up too much space.

The 12 discs are housed in an attractive black hardcover book with a sturdy black cardboard slipcover with red foil inlay with the Batman symbol on the back and the Batman silhouette and show logo on the front. The discs are safe and secure in the book and slide out easily without risk of damage to the discs or packaging.

The discs load directly to static-image main menus featuring Warner's traditional navigation system. A digital slip is also included for the entire Animated series - not the films. Currently this only redeems in SD on VUDU, so hopefully, that'll get upgraded to HD soon with these new masters. 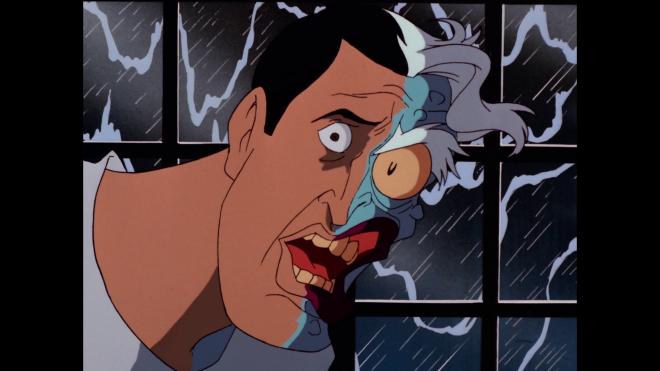 Presented in proper 1.33:1 broadcast framing in 1080p, I'll just say my jaw dropped the first time the amazing intro title sequence came up.  Batman: The Animated Series is simply beautiful. The colors are rich with vibrant primaries and bold blues, crimson reds, and bright yellows just leaping off the screen. Detail levels are incredibly crisp to the point you can actually spot fine lines in the characters that I hadn't seen before. You can even spot the occasional brushstroke in the cells. On top of that, I felt like I was experiencing a measure of true depth in the animation layering - especially in scenes where there aren't any fast cuts or camera pans. If that wasn't enough, this image is incredibly clean free of any dirt or speckling that would frequently appear in the previous DVD releases. Film grain is intact and maintains a subtle presence without becoming too noisy or intrusive. 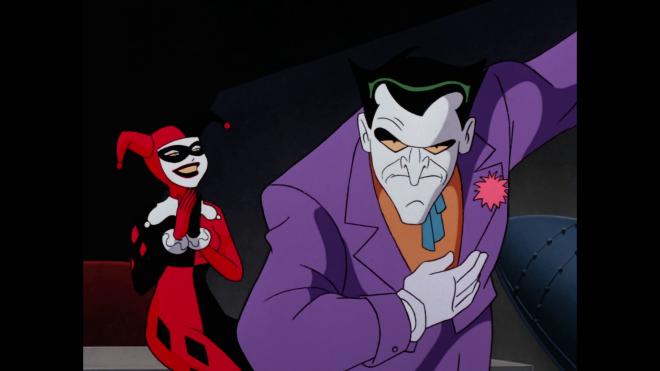 Occasionally, grain thickens and gives a bit of a flicker effect, but those moments are so brief you could blink and miss them entirely. Ultimately, the image maintains a true film-like appearance. Given Warner Archive's transfer for Mask of the Phantasm, my expectations were pretty high for this release, but also realistic considering the number of episodes. After digging through a few episodes on each disk, I'm excited to report that the show is practically flawless and proves to be another remarkable restoration from the team at Warner Bros. There is some slight speckling, but that only appears to be grit or debris trapped under individual cells. As I dig further through each disc and not just the cherry-picked favorite episodes from each season for this review, I'll report any anomalies I encounter but as of now, I'm wide-eyed amazed by this release. 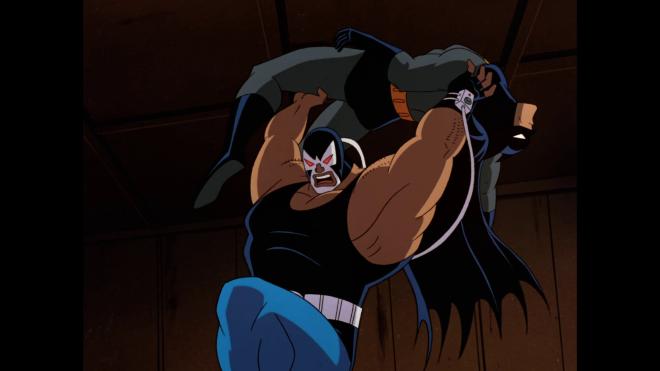 Batman: The Animated Series pulls out one hell of a DTS-HD MA 2.0 audio mix from its utility belt for each episode. When that theme song kicks in at the beginning of each episode I just want to slam my thumb on the volume button. Don't get me wrong, levels are just fine, there's no softness or hard-to-hear spots. I just wanted it really loud for that Elfman theme music! Dialogue is crystal clear throughout. Sound effects are particularly lively and robust, allowing for a fully balanced presentation with some great low tones for extra atmosphere. When the Batmobile fires up its turbine engine, that roar has got some really impressive punch to it! Explosions, gunfire, and whenever Batman fires off his grappling hook or throws out his Batarang give the mix some terrific imaging and channel movement. Each episode is clean and clear without any anomalies to report. 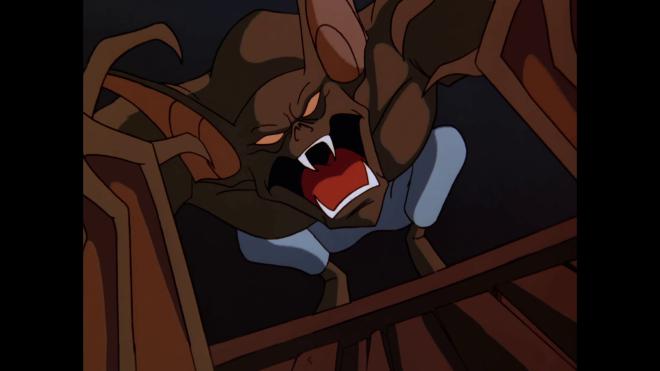 Like Man-Bat, the bonus features selection for Batman: The Complete Animated Series is an absolute beast. A number of these features have been ported over from the DVD releases. The commentaries are great listening. Since I didn't own the series beforehand, these were a lot of fun to pick through while I pulled this review together. The behind-the-scenes and cast retrospective material is fantastic and the character design segments are a real treat, especially Harley Quinn who was created for the show and then became official comic canon. There is so much new and archival material here, it's great to see that WB went full out and truly gave fans the total package deal. 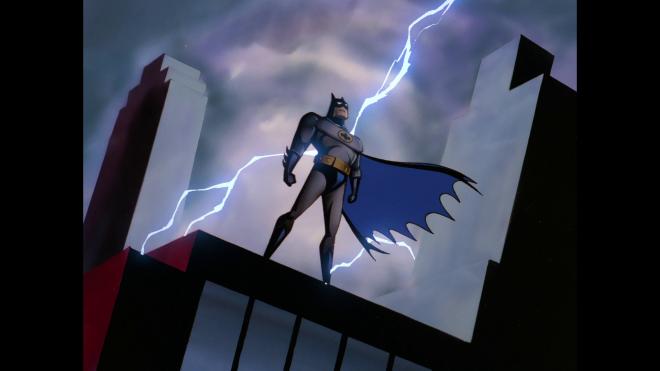 Batman: The Complete Animated Series is a home-run Blu-ray release. The show continues to be one of the truest adaptations of the comic books, while also being approachable to newcomers. You don't need to be steeped in the lore to watch it, although it does add to the enjoyment if you know the references. Warner Bros. has really outdone themselves with this release, going full out with a masterful restoration effort. The video transfers for each episode are exceptional and the show sounds better than ever. Not to mention the hours upon hours of bonus features you've got to dig through. With roughly 40 hours worth of episodes and movies, this set is a beast. It's a must own for the die-hard Bat-fans out there and even if you're a casual fan and don't know the episodes like the back of your hand, this is still a Highly Recommended set offering a massive improvement over the previous DVDs.

Sale Price 96.09
List Price 112.99
Buy Now
3rd Party 93.78
In Stock.
See what people are saying about this story or others
See Comments in Forum
Previous Next
Pre-Orders
Tomorrow's latest releases