Young Man with a Horn

Kirk Douglas files one of his best early performances in Young Man with a Horn, director Michael Curtiz's musical-film noir hybrid that's loosely based on the turbulent life of virtuoso jazz trumpet player Bix Beiderbecke. A smoldering Lauren Bacall and fresh-faced Doris Day vie for Douglas' attention, but he only has eyes for his gleaming piece of brass in this engrossing drama that's packed with thrilling musical sequences. A gloriously lush 4K remaster struck from original nitrate elements and fantastic audio make it a pleasure to cozy up to Warner Archive's impressive Blu-ray presentation of this underrated film. Highly Recommended.

Young Man with a Horn may not be the best known feature directed by the man who won an Oscar for Casablanca and helmed such classics as The Adventures of Robin Hood, Yankee Doodle Dandy, Captain Blood, and Mildred Pierce, but this thinly veiled salute to one of the all-time great jazz trumpeters is often unfairly overlooked, even by Michael Curtiz connoisseurs. That's a shame, because Young Man with a Horn contains all the attributes that distinguish the finest films of this tireless Warner workhorse - elegant naturalism, economic storytelling, provocative themes, artistic shot compositions, and powerful performances. Its story may be flawed, but its intoxicating style and the marvelous music that pulses through it assuage any narrative deficiencies and keep the movie firing on all cylinders from its first frame to its last.

Produced in 1950, the same year as The Breaking Point (another vastly underrated Curtiz classic), Young Man with a Horn charts the rise and fall of jazz musician Rick Martin (Kirk Douglas), who reveres his prized trumpet more than anything in life...and that includes wholesome, level-headed band singer Jo Jordan (Doris Day) and sexy, manipulative socialite Amy North (Lauren Bacall), both of whom pine for his attention and affection. The orphaned, lonely Rick discovers music in his youth and catches the eye of accomplished black trumpeter Art Hazzard (Juano Hernandez), who recognizes the kid's boundless potential, appreciates his dedication and drive, and becomes a respected teacher, mentor, and father figure. Rick sticks to his trumpet like glue, and when he grows up and gets his first gig, the young man with a horn bowls over his fellow musicians with his fiery riffs. The band's low-key, cigarette-puffing piano player, "Smoke" (Hoagy Carmichael), especially takes notice, and the two become fast friends.

"He was cut out to be a jazzman the way the righteous are chosen for church," Smoke says, but like many gifted artists, Rick's bloated ego begins to rival his monumental talent after he achieves a modicum of success. The hotheaded trumpet player thumbs his nose at written arrangements, preferring to blow his horn in a brash, progressive manner that dazzles the ears but makes his bandleaders' blood boil. "I don't play for people," he says. "I play for myself." An unhappy marriage and artistic frustration soon make the temperamental Rick an unreliable commodity, and when jazz - what Amy calls "a cheap, mass-produced narcotic" - turns its back on him, Rick turns to the bottle to blot out the hurt. As he drowns his sorrows and alienates those who care about him, the once bullet-proof musician who could blow the roof off any jazz joint in the Big Apple begins sputtering and spiraling toward self destruction. 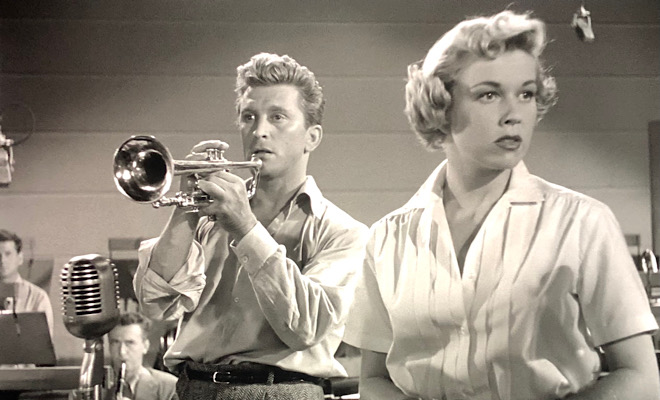 Loosely based on the life of boy wonder trumpet player Bix Beiderbecke, who wowed audiences during the Roaring '20s, Young Man with a Horn profiles a tortured virtuoso trumpet man with a fascinating mixture of gloss and grit. Jazz, with its seductive allure, explosive passion, and earthy, soulful undercurrents, makes an ideal musical partner for film noir, and Curtiz expertly exploits the combustible combination. As Rick navigates smoky clubs and late-night jam sessions while finessing hot, boozy tempers and twisted, smoldering emotions, Curtiz deftly depicts the dizzying highs and moaning lows of music's version of the underworld. He also starkly contrasts Rick's noirish offstage life with the glitz and glamor of his band performances, and the A Star Is Born-like dichotomy, though familiar and a tad cliched, still wields considerable impact.

The oh-so-intimate relationship between Rick and his trumpet spawns soaring, sexy sounds, but like a duped noir hero, Rick discovers his beloved horn can be as fickle and unforgiving as a femme fatale. In addition to that subtext, the literate screenplay by Carl Foreman (High Noon, The Bridge on the River Kwai) and Edmund H. North (The Day the Earth Stood Still, Patton) contains hints of homosexuality (watch the film a second time and those hints suddenly become blazing neon signs) and overtones of racism. (Curtiz would explore the latter theme to devastating effect in The Breaking Point, which also features Juano Hernandez, one of the finest and most underrated black actors of his day, who files a powerful and affecting performance that rivals his exceptional work as Art Hazzard here).

The engrossing drama keeps the movie humming, but Young Man with a Horn is really all about the music, and if you love jazz and the great American songbook, you'll really enjoy cozying up to the lush orchestrations, Day's silky smooth vocals, and some of the most thrilling trumpet solos ever put on film. Douglas - his lips pursed, his brow glistening with sweat, his face twisted with tension - often looks as if he'll bust a gasket while producing screaming brass tones that crescendo to piercing decibels. Harry James, arguably the world's finest trumpet man, dubs the horn playing for Douglas and worked extensively with the actor for three months prior to shooting so Douglas could believably mime the instrument. His technique looks surprisingly authentic as a result, and it's a treat to watch him - and the arresting Day - perform an array of standards by such iconic composers as Harold Arlen, George Gershwin, Cole Porter, Richard Rodgers, and Harry Warren, among others.

Douglas approaches his role with the same me-against-the-world intensity and ferocity that defined his Oscar-nominated turn in the previous year's explosive boxing drama Champion, and the result is another magnetic portrayal. Bacall doesn't appear until the 50-minute mark, but makes up for lost time with an especially pouty, cynical, and seductive performance. She lights Douglas' fuse with sadistic relish, and the ensuing fireworks between them are something to see. 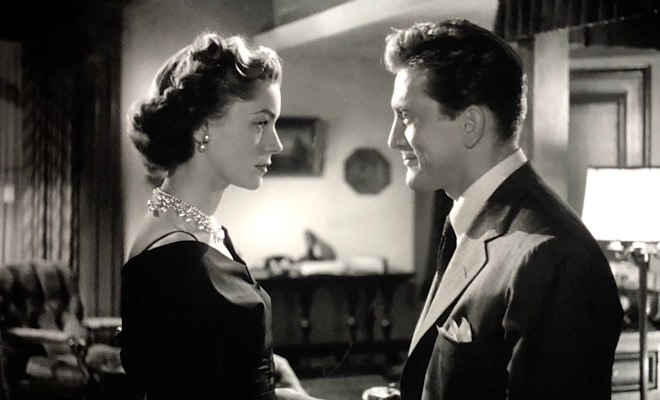 You might think Douglas and Bacall would overshadow Day, who was appearing in only her fourth film and tackling her first dramatic part, but the 28-year-old singer (who looks a few years younger than Bacall despite being a couple of years older) more than holds her own. Natural, sincere, and often luminous, Day tackles her scenes with aplomb and effortlessly steals attention from her more seasoned co-stars. Her impressive work in Young Man with a Horn would lead to a pivotal non-singing role in the social issue melodrama Storm Warning - another movie that deserves a Blu-ray release - the following year.

In her 1978 autobiography By Myself, Bacall opines Young Man with a Horn "was nowhere near as good as it should have been." I respectfully disagree. The movie does have faults - its ending is a letdown, thanks to studio chief Jack Warner's demand for an upbeat finish (in reality, Beiderbecke died from complications of alcoholism at the tender age of 28), and Rick's decline is a bit rushed - but Young Man with a Horn consistently crackles with the kind of nervous energy and mercurial emotion that defines jazz and reflects the artistic temperament. The sublime music, literate script, expert direction, and stellar performances all combine to create an involving and entertaining film that deserves to be considered a bona fide Curtiz classic. 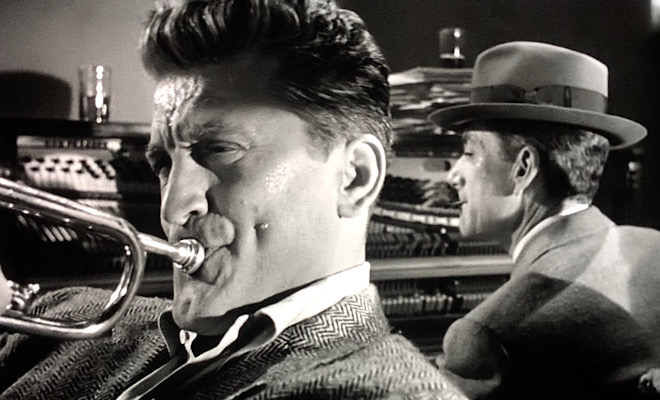 Young Man with a Horn arrives on Blu-ray packaged in a standard case. Video codec is 1080p/AVC MPEG-4 and audio is DTS-HD Master Audio 2.0 mono. Once the disc is inserted into the player, the static menu with music immediately pops up; no previews or promos precede it.

When black-and-white is done right it's a joy to behold, and thanks to a new HD remaster from a 4K scan of the original nitrate elements, Warner Archive's transfer of Young Man with a Horn is just that. Gloriously rich in tone and sporting just enough visible grain to supply texture and maintain a lovely film-like appearance, the 1080p/AVC MPEG-4 rendering produces an often stunning image that's packed with detail, depth, and pitch-perfect contrast. The transfer faithfully honors the striking cinematography of three-time Oscar nominee Ted McCord (The Sound of Music), who punctuates this musical drama with plenty of seductive noir accents. Bold, deep blacks, crisp, stable whites, and wonderfully varied grays create a cohesive picture that keeps the eye engaged from the first scene to the last.

Rarely has Douglas' cavernous chin cleft looked so clear, and the razor-sharp close-ups also reveal faint freckles on Day's cheeks and an almost imperceptible scar near her chin. The New York City location work blends seamlessly with studio-shot interiors, exceptional shadow delineation enhances the impact of nocturnal scenes, and not a single nick, mark, or scratch sullies the pristine print. A bit of softness occasionally creeps in, but that's the only hiccup in an otherwise perfect presentation that will thrill not only fans of this underrated film, but also anyone who appreciates fine photography.

Young Man with a Horn may not be a musical per se, but Warner Archive's superior DTS-HD Master Audio 2.0 mono track treats it like one. Fantastic fidelity, excellent depth of tone, and perfect modulation distinguish this crisp, vibrant track that showcases both the virtuoso trumpet playing of the legendary Harry James and Day's silky smooth vocals. A wide dynamic scale embraces James' distinctive screaming brass tones without a hint of distortion and maximizes the impact of the full-bodied orchestrations of Warner musical director Ray Heindorf, who along with Max Steiner also supplies uncredited scoring to the picture. Day's affecting renditions of such standards as "The Very Thought of You," "Too Marvelous for Words," "I May Be Wrong (but I Think You're Wonderful)," and "With a Song in My Heart" sound rich and full-bodied (and benefit from a slight volume boost), and all the literate dialogue is clear and easy to comprehend.

Sonic accents like shattering glass, gunshots, and fisticuffs come through cleanly, and all the nightclub and streetscape atmospherics nicely shade the action. Any age-related hiss, pops, or crackle have been meticulously erased, thus ensuring nothing clouds the glorious jazz and big band arrangements generously sprinkled throughout the film. If you love all this music as much as I do - and enjoy reveling in its impeccable presentation here - you'll especially appreciate the Song Selection menu that provides quick access to music cues that span both vocal and instrumental selections. It takes a lot for me to award five stars to mono track, but this one most definitely deserves the lofty rating.

Warner Archive ups the extras ante on this Blu-ray edition by including a trio of vintage Bugs Bunny cartoons and a radio adaptation, as well as porting over the film's original trailer from the previous DVD release.