The Curse of Frankenstein - Warner Archive

After Universal Studios exhausted their stable of monsters and blood-thirsty creatures, British studio Hammer resurrected one of the most iconic horror monsters of all time in The Curse of Frankenstein. The studio's first color horror film is a visceral unsettling loose retelling of Mary Shelley's classic novel starring an unhinged Peter Cushing as Baron Victor Frankenstein with Christopher Lee donning some grotesque makeup as the Creature. Warner Archive gives The Curse of Frankenstein a frightfully fantastic Blu-ray release sourced from a new 4K restoration, fans get three aspect ratios to choose from on top of an informative collection of bonus features. If you're a Hammer Horror fan, it doesn't get better than this. Highly Recommended.

The once esteemed scientist Baron Victor Frankenstein (Peter Cushing) is a shadow of his former self as he sits in a dank, dirty cell awaiting execution for murder. Desperate for anyone to believe him, he tells the confessor his sordid story of tampering in God's domain by creating a man, a horrible Creature (Christopher Lee) out of the discarded parts of dead people with his partner Paul (Robert Urquhart). Will this wild tale be enough to keep victor from the guillotine chopping block - or will it condemn him to death as a murderous madman? I owe my Dad a lot of credit for my cinematic upbringing. He's responsible for showing me a lot of the best movies of any genre ever made, and it's not even because he's a big movie guy. He just enjoyed them and wanted me to share that enjoyment. While I'm a huge fan of the classic Universal Monsters today, it took me a long time to get there as a kid. When I was a boy, anything made in black and white that wasn't the Three Stooges or Abbott and Costello wasn't interesting to me. For years, the only Universal Frankenstein or Dracula movie I would watch was Abbott and Costello Meet Frankenstein. After a failed attempt to get me into the James Whale original 1931 classic, my dad brought home 1957's The Curse of Frankenstein. The movie that scared my dad when he was ten, freaked me out when I all of six or seven years old.

While I will forever love Boris Karloff and his creepy version of the Monster in Frankenstein and the more heartfelt turn he took with the role in The Bride of Frankenstein, that first introduction to Christopher Lee's Creature for me is the most terrifying and iconic presentation of Mary Shelley's gothic horror monster. It's the movie that drove me to try and read Shelley's novel entirely too young - that book was way beyond my reading level for years, but I kept trying to nail it! Once I managed my way through it, it's remained an all-time favorite I like to revisit every few years.

To that end, I have a weird love for pretty much every Frankenstein movie. When one gets announced, I'm usually at the theater to enjoy it. I'm a realist when it comes to their overarching quality, I still don't quite know what I, Frankenstein was trying to do, but for the most part, it's pretty damn hard to make a bad Frankenstein movie. The weirder the better in my book. Roger Corman's Frankenstein Unbound is a particular favorite because it breaks so many of the classic story's conventions as a sort of bizarre version of Back to the Future with a time-traveling John Hurt meeting Raul Julia's Victor Frankenstein and a particularly gnarly version of the Creature played by the always great Nick Brimble. But for films that aim to stick to the basics, Hammer's The Curse of Frankenstein is probably my absolute favorite of the bunch. Again, I do love Karloff, but there's something about the approach to this one that makes it truly great and stands out from anything ever seen before on the big screen.

I love that this movie is essentially a confession from Victor. He did such horrible things that he has no choice but to admit to what he's done in the slim hope that it gives him some measure of clemency. Even with the film's rather definitive ending, there were two more sequels of substantially lesser quality. Cushing's Victor Frankenstein is the perfect mad genius. He's charming and driven to explore, but at the same time his obsession is his folly. As he's blinded by his own madness, it's too late for him to realize the true horror he's created.

The next thing I love about this film is Christopher Lee's depiction of the creature. His makeup is gnarly, horrifying, with open wounds and what clearly amounts to a blind eye. His big reveal is one of the most chilling moments of the movie. That moment he takes the bandage off his face, it's not a mad rage that crosses over the creature's face when he sees Victor - it's recognition! The brain may be damaged, but it remembers what was done to it! And as the film progresses - and true to the book - the creature becomes a tragic figure and less and less of a monster.

But then everyone has a favorite version of Frankenstein. I used to love the Kenneth Branagh Mary Shelley's Frankenstein and Robert De'Nero as the Creature, but after repeated viewings over the last 25 years or so, it slips further down the list. I've only ever seen Andy Warhol's Flesh For Frankenstein a handful of times. I've long hoped that a fully restored 3-D Blu-ray would become available but that seems less and less likely now as the years go by. So until some really creative nut cracks the code for a new take on Frankenstein, I'll keep revisiting the classics. And now thanks to Warner Archive, I can retire my old DVD of The Curse of Frankenstein for my future viewings.

Warner Archive Collection delivers The Curse of Frankenstein for Hammer Horror fans in a truly terrific 2-Disc special edition set. Spread out over two Region Free BD-50 discs, both discs are housed in a traditional two-disc keep case.  Each disc opens to a static image main menu. Disc One offers the film in 1.85:1 and 1.66:1 aspect ratios while Disc Two offers the 1.37:1 Open-Matte version as a bonus feature.

Sourced from a fresh new 4K restoration, I deeply wish Warner Archive Collection was in the 4K UHD Blu-ray game, but as it is - this is a spectacular restoration effort for this film. After languishing for years on DVD, this film finally makes its 1080p debut in the North American market. While the DVD was fine, it lacked obvious detail clarity because of the film's often purposeful soft-focus photography but also lacked genuine color pop. Nearly 20 years ago when I was in school I got to see a 35mm print of this film projected and it was glorious to see those rich primaries come to life.

This Blu-ray is the closest on home video I've encountered in replicating those vivid colors - and then even improving them. The print I saw so long ago had some obvious age wear and tear because it came from a private collector, but it's become my benchmark for this film and this Blu-ray offers a far superior viewing experience. While some scenes are inherently soft, there are moments of strikingly clear details. I felt I was seeing aspects of the film's production design, costuming, and makeup for the first time. Again - that incredible "birth" sequence for Christopher Lee's Creature is a highlight for this release. Seeing that face for the first time is always shocking and now you get to revel in the imagery. 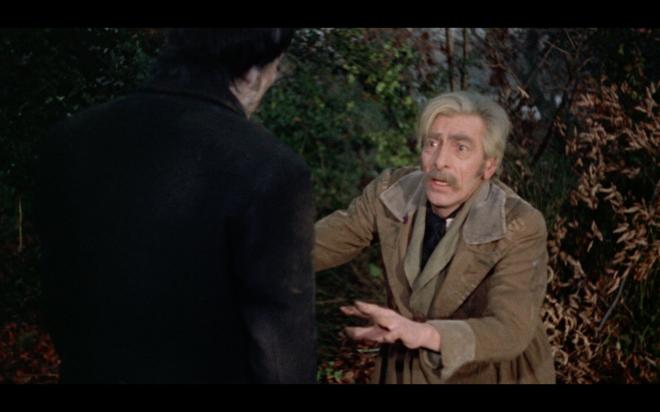 Best of all with this release from Warner Archive - you get three aspect ratios to choose from. You have the original 1.85:1, the 1.66:1, and for those like me who grew up watching this on videotape as a kid, a 1.37:1 Open Matte version of the film. All three aspect ratios look terrific and are sourced from the same new 4K restoration elements. Each version does offer a slight change in overall picture quality mostly due to the framing of each presentation. To that end and strictly for clarity and detail presentation the 1.37:1 is probably the sharpest of the three. With that, the 1.85:1 and the 1.66:1 are equally impressive in their own ways. So it's dealer's choice. If you have a favorite aspect ratio for this movie that tickles your nostalgic funny bone, you get to choose what's right for you! 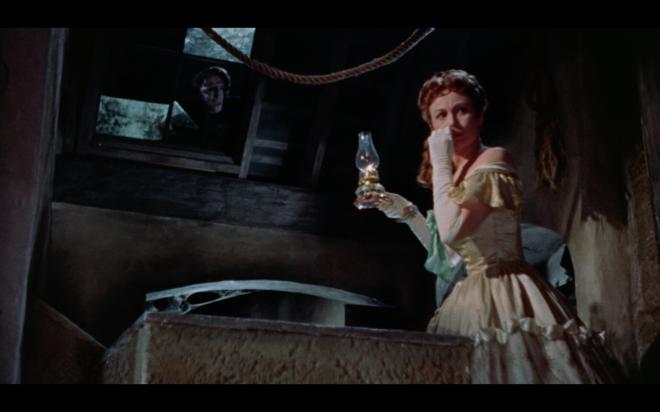 All three aspect ratio options for The Curse of Frankenstein is matched with a terrific clean and clear DTS-HD MA 2.0 audio mix. Dialogue is clean and clear throughout the film as there are many grandiose speeches from Cushing and Robert Urquhart to be heard. Scoring is fantastic leaning into the gothic horror nature of the film. Sound effects are on point giving enough spacing and imaging to offer a dynamic soundscape to enjoy. The film's big climax is a major highlight. Without hiss, pops, or any age-related issues of note, this is a splendid audio mix that matches the new video transfer perfectly. Warner Archive went full out for this release offering fans a grand assortment of involving bonus features to pick through. The Audio Commentary with Constantine Nasr and Steve Haberman is a lively track chock full of trivia and relevant information about the film, its place in history at Hammer, and the film's genesis through different drafts. After that, there are some great interviews and tributes to various cast and crew members. While some of these can drift into a bit fluffy territory, they're informative and offer some great looks at the making of this movie. The big draw here is the 1.37:1 aspect ratio presentation. While not strictly a bonus feature exactly, it's one more great way to watch this classic movie and it's found only on the Bonus Features disc. 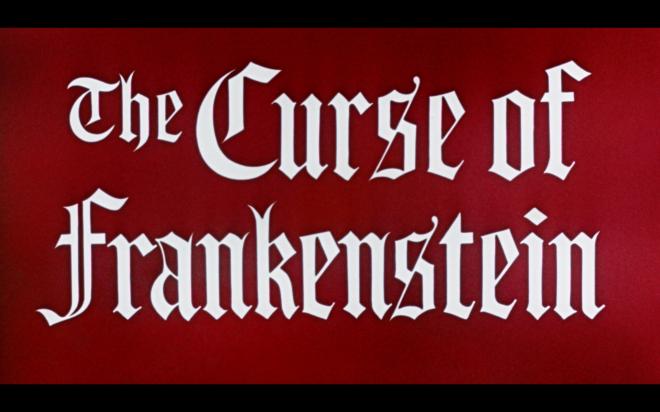 As Hammer Horror films have started to be revisited for new deluxe and Collector's Edition Blu-rays from various studios and boutique labels, I was really hoping someone, someday would punch out a grand release of The Curse of Frankenstein. The temptation to import from other world territories was tough to hold off, but I'm glad I waited. Warner Archive has done right by this films and the legion of Hammer Horror Fans out there who have been waiting for a truly splendid release of this film. And now we have it. Perhaps my personal favorite version of this film, it's great to see it looking better than ever before with appreciable details and beautiful colors. On top of a grand restoration, we're treated with three viewing options as well as a host of informative bonus features to enjoy. There's really nothing more to say about this one than if you're a fan of The Curse of Frankenstein or Hammer horror pictures - don't miss it. Highly Recommended.