While we may never get to the bottom of who actually is on first - we can digest 28 of some of the funniest comedies ever made in Abbott & Costello: The Complete Universal Pictures Collection. While not every single film the comedy duo ever made, we get the vast majority and their best efforts. There are some clunky films in the set - but the vast majority are winners and true classics. With over two dozen films and hours of bonus features, this is one incredible set that celebrates the 80th anniversary Bud Abbott and Lou Costello's partnership. Highly Recommended. 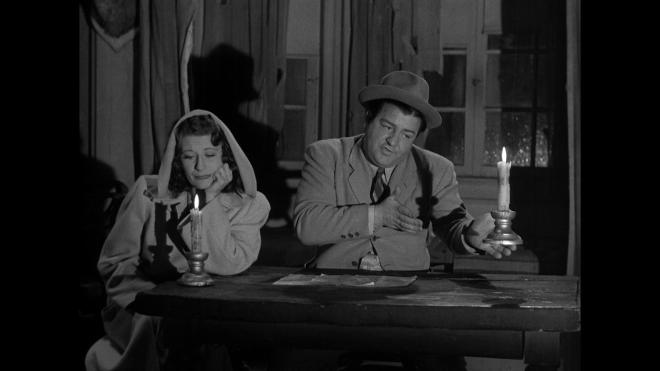 What can one say about an all-time classic comedy duo like Abbott and Costello? Stage shows, a hit radio program, a television show, and from 1940 to 1956 they made 36 feature films together! There are career highs like Hold that Ghost and Meet Frankenstein and there are a couple of career lows - Go to Mars and Jack and the Beanstalk weren't big winners in my book. Pardon My Sarong was and oddly out of place fit for their comedic antics but at the same time something like It Ain't Hay proved to be pretty damn funny even it's not one of the duos better efforts. Just the same, with that massive number of films coming out each year you're bound to have a couple of dicy ventures. Thankfully the vast majority of their films - 28 of them for Universal - are pretty damn entertaining.

My love of all things Abbott and Costello began when I was a little kid - maybe 4-years-old - when my dad checked out Hold That Ghost from the library around Halloween. Even though I wasn't hidden away from horror films, I had my regular Saturday morning double feature on T.V., my folks were careful what they showed me. My Dad figured something funny and a little spooky would keep me occupied for a bit. I honestly don't remember how many times I saw that movie - but it was a lot! To hear my parents tell it I wore out the tape and they had to buy a replacement -- I doubt that point but I do have to admit it's a possibility. Not long after that, I discovered Meet Frankenstein, Buck Privates, Who Done It, and countless other feature films.

Abbott & Costello: The Complete Universal Pictures Collection collects the vast majority of the comedy duo's cinematic efforts. It's a hell of an undertaking to dig through this set. Naturally, you want to roll right into your favorites, but if there's anything you'd missed it's worth checking out. Lost in Alaska, Comin' Round The Mountain, and Mexican Hayride are often overlooked chucklers. With 28 films in this collection, you have hours of hilarity ahead of you. With the holidays coming up, it's a great way to spend your free days!

Abbott & Costello: The Complete Universal Pictures Collection is a beast of a collection! The best -and the bulk - of Bud Abbott and Lou Costello's feature films laugh their way onto Blu-ray in a 15-disc 28-film collection! Each disc has two feature films with each film getting their own set of bonus features. All of the films are spread out between three multi-disc sturdy Blu-ray cases held in a hard paper-stock case with a booklet that contains information about Bud Abbott and Lou Costello's careers, the films, with some trivia. Each disc opens to a movie select menu letting you choose which film you want to watch which moves to its own unique static-image main menu with traditional navigation options. The 15th disc contains additional newly produced and archival bonus features. 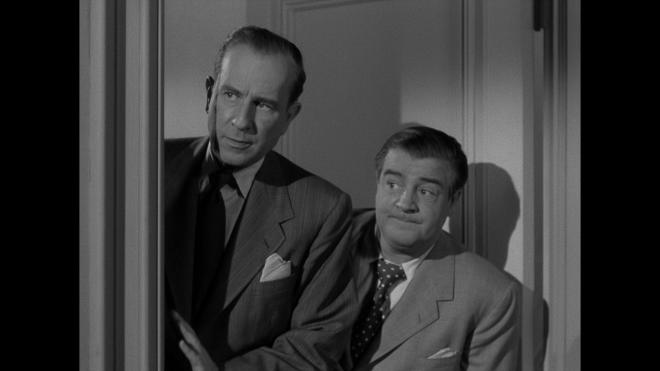 Similar to the films themselves, the 1.33:1 and for their later films 1.85:1 1080p black and white transfers for each film in the Abbott & Costello: The Complete Universal Pictures Collection are a bit up and down. These transfers are subject to Universal's own archiving and restoration efforts so some are pretty damn good looking - and some leave a bit to be desired. Where there are high points for films like Buck Privates or Meet Frankenstein there are notable lows with Hit The Ice and others marred by softness and age-related wear and tear. Even at their worst these presentations still offer notable improvements over the previous DVD editions Universal offered in their 8-Film collections from a few years ago. 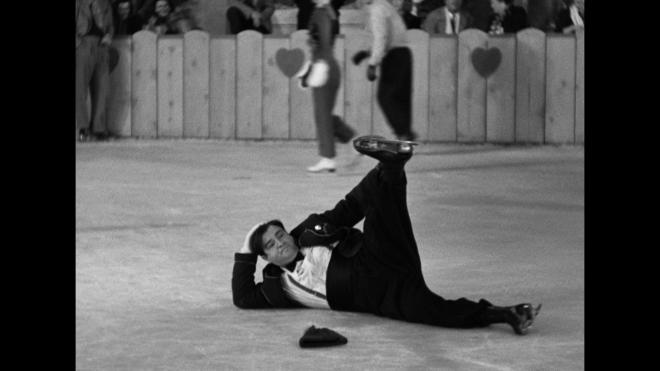 The biggest overall improvement from DVD to Blu-ray is the notable sense of depth to the image. The extra detail, grain presence, and additional shadow separation gives each of these films a welcomed three-dimensional presence that wasn't apparent in previous releases. Considering One Night in the Tropics celebrates its 80th Anniversary, their final film Meet the Mummy is 65 years old - these movies aren't spring chickens. One should keep their expectations in check but overall I'm very pleased with the transfers for these films. Where you have highs and lows with the transfers, this collection of 28 films ranges from the low end where I would put Hit The Ice at a 2.5/5 to highs in the range like Meet Frankenstein or Hold That Ghost that I would peg at a 4/5 with a 3.5/5 average. Without a massive restoration undertaking, these transfers are likely to be the best we'll see on home video, and for the most part, that ain't half bad!

NOTE: Meet Frankenstein, Meet The Mummy, and Meet The invisible Man were already available individually and/or previously in the Universal Classic Monsters Collection and Legacy sets. These transfers haven't been remastered and are exactly the same - not to say that's a problem as they're pretty damn good looking. 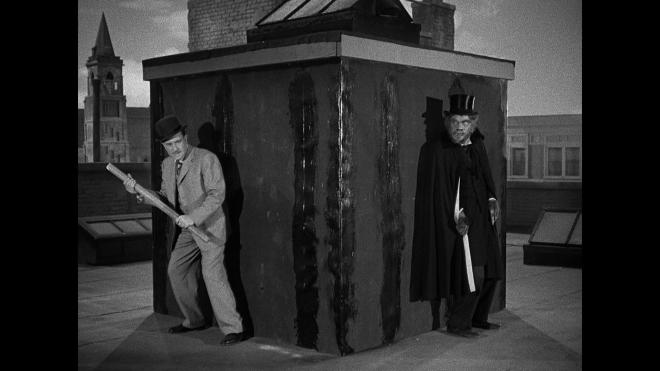 Each film in the Abbott & Costello: The Complete Universal Pictures Collection is given a solid - if not necessarily remarkable DTS-HD MA 2.0 audio mix. Similar to the video transfers, the audio mixes for these films run the gamut of being merely serviceable to being quite good. Virtually every film in the set exhibits at least a little bit of hiss with some occasional pops and cracks. Most of the time they're not bad, but then you get the occasional outing where the age-related issues can be a bit more substantial. Thankfully dialogue isn't impacted and when you have Bud and Lou in their best comedic exchanges you don't miss a punchline. Sound effects offer some sense of dimension, but really they feel more perfunctory outside of setting up a comedic bit. Scoring isn't always the most remarkable for these films, but each film is given an earnest effort. Levels are spot on without too much need to monitor your volume. 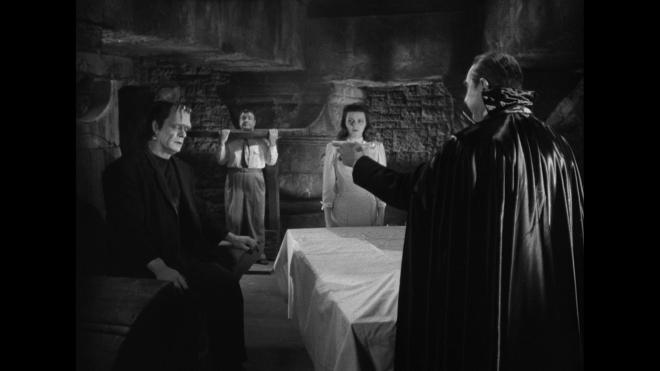 When you have 28 films each given their own unique set of bonus features as well as an entire disc dedicated to extra material - Abbott & Costello: The Complete Universal Pictures Collection has a massive amount of bonus content. It'll take you days to get through each film with their own extras on top of that bonus disc! Kudos to Shout Factory for really giving this set everything they could throw at it beyond just being a simple collection of bonus features. 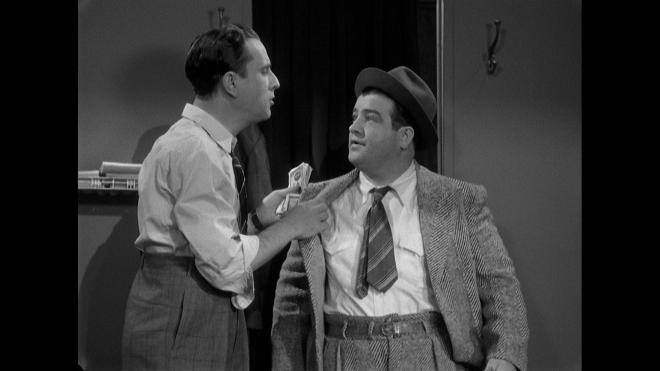 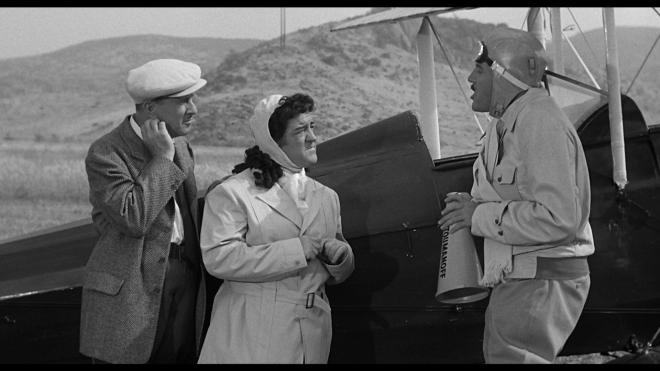 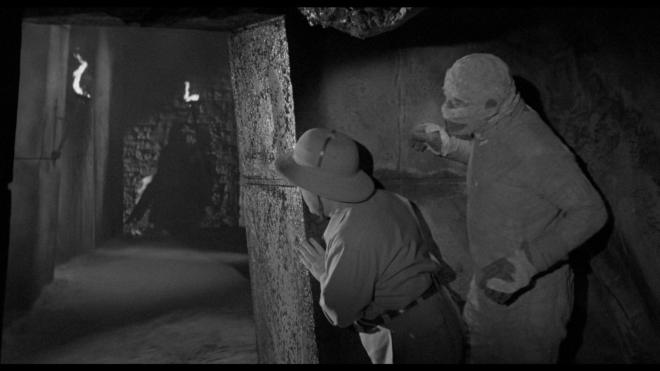 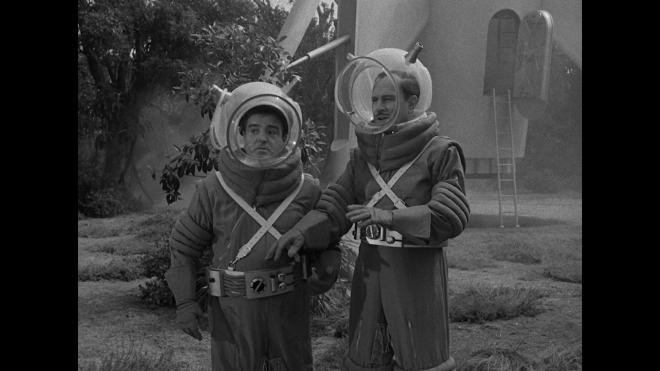 You too will cry "Ooooooo Chick!" when you get your hands on Abbott & Costello: The Complete Universal Pictures Collection. Collecting all 28 films of the classic comedy duo's time at Universal Studios, you're looking at hours upon hours of hilarious content to dig through. Sure, like any comedy team, not every film is a winner - their later efforts were a bit spotty - but even at their lowest, there are some good laughs to be had. Hold That Ghost was the film that introduced me to them and it remains my timeless go-to favorite.

While the A/V presentations for each film may not blow your hair back - they are a massive step up over the previously issued 8-film sets from Universal on DVD. Some of their best films look practically brand new while some of their less than stellar outings suffer from softness and age-related issues. Without an exhaustive and no doubt expensive restoration effort - this is likely the best we'll see these films on home video - and for the most part that's pretty damn great. Top it off with hours of bonus features including 16 commentary tracks, you have one hell of a collection on your hands and a great way to spend some time off this holiday season. Highly Recommended.

Sale Price 115.61
List Price 169.99
Buy Now
3rd Party 139.09
In Stock.
See what people are saying about this story or others
See Comments in Forum
Previous Next
Pre-Orders
Tomorrow's latest releases