In our review of Friday the 13th Collection Deluxe Edition, the evolution of horror legend Jason Voorhees comes to a conclusion as his metamorphosis from supernatural, unstoppable killing machine ends in a trio of series outliers. Scream Factory celebrates the original's 40th anniversary by resurrecting the franchise into a massive, hulking 16-disc "Deluxe Edition" set with an incredible wealth of bonus features. The first four films and the ninth and tenth installments enjoy improved HD video presentations while the rest remain the same satisfying transfers and excellent lossless audio, making the entire package a Highly Recommended release. 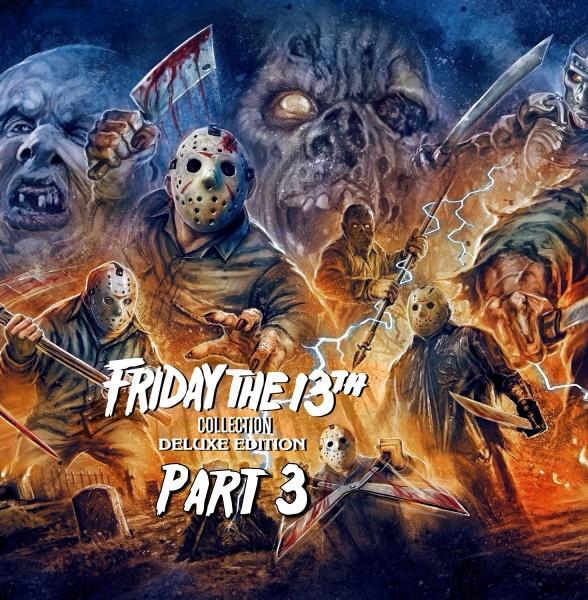 For the next Friday entry, producers once again ignore previous events and resuscitate Jason from his proverbial death for Jason X, the final phase in our favorite unstoppable monster's evolution. Comically, VFX artist turned director James Isaac and writer Todd Farmer launch the Crystal Lake Killer into outer space, which ironically is where franchises go to die. The "Die Hard in Space" premise still adheres to familiar tropes, but the plot replaces a campsite with hormonally-driven young fodder with a spaceship of hormonally-driven, incompetent cosmonauts. Most memorably, Jason sports a hilarious makeover with a futuristic mask and body armor, serving as a cautionary tale on the unexpected dangers of nanotechnology. Although driven by a light sense of humor and intentional over-the-top silliness, the tenth entry in the series is ultimately too dumb for its own good with a preposterously asinine conclusion. (Movie Rating: 2.5/5)

A decade-old promise is finally realized in Freddy vs. Jason, which nicely blends excessive gore with a healthy dose of comedy. Although it doesn't completely satisfy expectations, the crossover of the two biggest horror franchises still manages to entertain. It's the sort of cheesy production urging devoted fans of either series to boo, hiss, and throw popcorn at the screen on a few occasions. With director Ronny Yu's strong visual style, Damian Shannon and Mark Swift's script does surprisingly well mixing the two mythos with agreeable believability and with respect to audience intelligence. However, the lack of intelligence in a cast of grating characters is mildly annoying, but really, a group of misbehaving kids partaking in recreational drug use and premarital sex is to be expected. Still, with amusing allusions to both movies,  the final mano-a-mano showdown between the two horror giants makes for a fun installment. (Movie Rating: 3/5)

Being a fan of Marcus Nispel's take on Tobe Hooper's 1974 seminal horror classic, I was initially optimistic for this 2009 reimagining of Friday the 13th from Michael Bay's production house. At best, the German-born director returns the franchise to its viscerally shocking roots but with more buckets of blood and topless women. Sadly, the story's bizarre hodgepodge of the best bits from the first four films feels like a tonally cheap, updated and frustrating slog featuring the biggest douchebag jerk of the entire franchise. From the same writing duo that conceived the last entry, the plot is — likely by accident — a decently bearable watch thanks to the subtle appropriation of those aforementioned movies. After a dumb cold open surmises part one in under two minutes, Jared Padalecki shows up essentially as Rob from The Final Chapter, and Jason goes from burlap sack to his iconic hockey mask in a mediocre fashion. (Movie Rating: 2.5/5)

The final three movies in the "Deluxe Edition" set up camp with identical video transfer as their previous Blu-ray counterparts. First up is the 1080p/AVC MPEG-4 encode Jason X sourced from a new 2K scan of the interpositive - NOTE - this detail was reported when this set was announced, but the box art slip and case art did not include it, which Shout has now confirmed to us is the case. This is a new scan and transfer and not remaster. This new scan shows strong object and textural details for a majority of the runtime, exposing the finer aspects of the spaceship and the various gadgets. Unfortunately, the dated visual effects have not aged well, and the stylized cinematography supplies the 1.85:1 image with a somewhat flat contrast balance even though whites are crisply rendered. On the whole, black levels are true and fairly rich with strong shadow details. The color palette is relatively bold and well saturated with more emphasis on earthy warm tones, making facial complexions appear natural and healthy.

The clash between two horror icons explodes with an excellent 1080p/VC-1 encode. The 2.35:1 image comes with sharp, distinct details in Jason's torn, slimy outfit and in the grimy, filthy sweater of Freddy. The aged hockey mask exposes the tiniest nick, dent and scratch while we can see every muscle tissue, rotten tooth and the individual scars on Freddy's badly burned face. Contrast is spot-on with clean, crisp white everywhere, and black levels are inky rich with deep, penetrating shadows that don't engulf the finer lines. Colors are bold and loud as well, making this a great high-def presentation.

It's no surprise the remake arrives with the best video presentation of the whole package, especially seeing as how it's the most recent addition. The VC-1 encode delivers a highly-detailed picture throughout, displaying sharp, well-defined lines on clothing and the surrounding foliage while close-ups are very revealing. The smallest object in the background is distinct, and the new Jason is particularly grimy-looking. The little bit of softness is inherent to the sun-backed photography, which comes with contrast levels that are intentionally on the hot side. Blacks could be a tad stronger, but visibility within the shadows is quite excellent while bold, vibrant colors invigorate the 2.40:1 image. The only thing keeping it on this side of perfection is some very light, almost negligible aliasing around the edges of objects.

Jason X crash lands with a surprisingly excellent DTS-HD Master Audio 5.1 soundtrack, equipping the visuals with a good sense of presence and clarity in the soundstage. Dynamic range is never pushed too far beyond its limits but delivers sharp detailing in the mid-range with room-penetrating acoustics. Most impressive is a hearty, booming low-end, giving every punch, thump, gunshot and footstep appreciable weight, occasionally digging deep in a few spots and rattling walls. Surrounds are mostly reserved for the musical score, but from time to time, atmospheric effects discretely travel into the sides, lightly enhancing the soundfield and creating minor spurts of immersion. Dialogue reproduction is clean and crisp in the center.

The showdown of the century erupts with a bombastic but immersive Dolby TrueHD 5.1 soundtrack that's fun and engaging. Imaging is broad with excellent fidelity and very well-balanced channel separation. The mid-range and acoustics are dynamic and extensive with great detailing in the higher frequencies and a potent, energetic low-end that adds heft and depth to the music as well as the action. Vocals are precise and intelligible in the center while the other channels deliver convincing off-screen effects. Rear activity satisfyingly extends the soundfield and envelopes the listener with various ambient effects.

Meanwhile, Nispel's remake hacks up Blu-ray with a highly entertaining Dolby TrueHD 5.1 soundtrack. Rear activity employs a variety of atmospherics and shares the space with the musical score, generating a satisfying soundfield with excellent panning and great directionality. Imaging is expansive and very engaging, displaying more off-screen effects that are discrete and convincing. Dynamic and acoustics are sharp, detailed and very well-balanced, maintaining appreciable clarity in the highs and good, room-penetrating mids. The low-end packs a worthwhile punch, providing the action with power and Jason's footsteps with scary weight while dialogue is well-prioritized amid the mayhem. 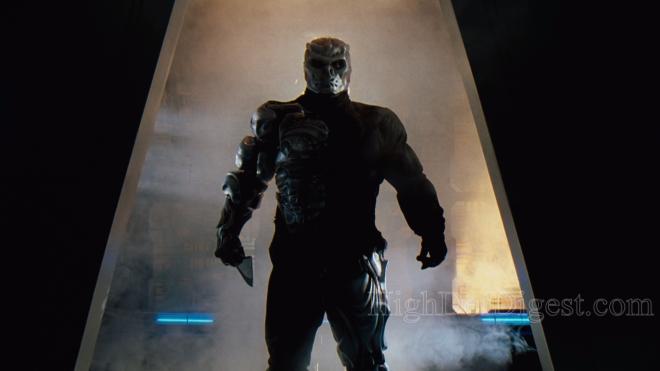 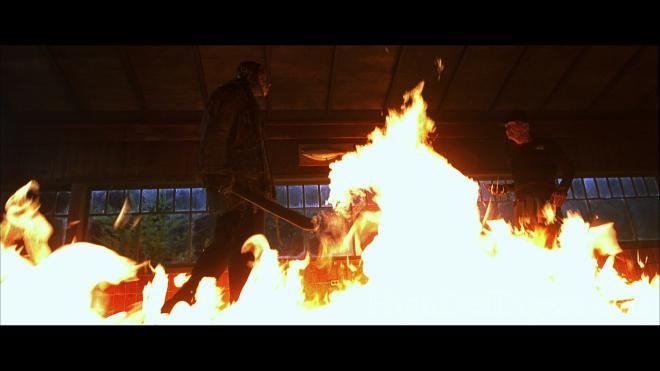