For our review of Friday the 13th Collection Deluxe Edition, we look at the evolution of horror legend Jason Voorhees in three storylines, and in this sequel, Jason's metamorphosis goes from ruthless, demented backwoods pysho to the iconic supernatural, unstoppable killing machine. Scream Factory celebrates the first movie's 40th anniversary by resurrecting the franchise into a massive, hulking 16-disc "Deluxe Edition" set with an incredible wealth of bonus features. The first four films and the ninth and tenth installments enjoy improved HD video presentations while the rest remain the same satisfying transfers. All twelve features come with excellent lossless audio, making the entire package a Highly Recommended release. 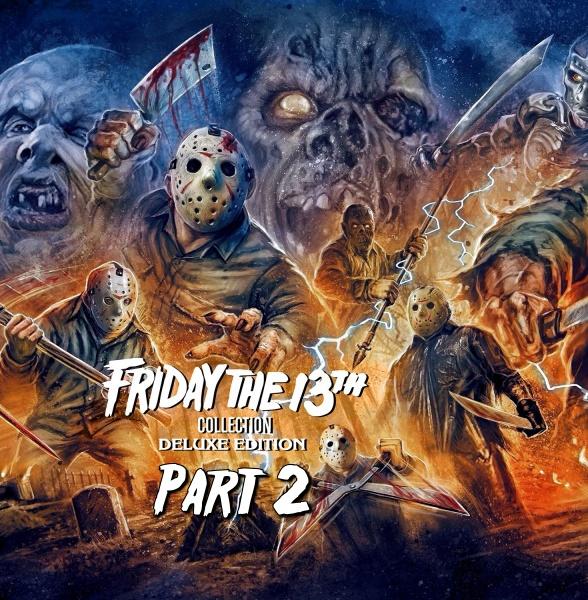 Although ranking as the worst in the series, Friday the 13th: A New Beginning still has its place and purpose in the metamorphosis of Jason Voorhees. By this point, the creative kills of idiotic, pointless characters are standard, but director Danny Steinmann breaks from the norm of its predecessors by ignoring brief recaps of previous events. Instead, and more importantly, the story quickly jumps into the plot with a troubled and permanently traumatized Tommy Jarvis having a nightmare about a pair of grave robbers. Also, it takes the killing spree outside of Camp Crystal Lake entirely, making the whole world fair game, and the campy comedy now becomes part of the franchise attraction. The plot continuing the Tommy storyline is admirable at best, giving some plausibility for the next installment, but the fifth entry is completely ruined by one the dumbest, nonsensical reveals in all of horror cinema. (Movie Rating: 1.5/5)

Thankfully, producers of the franchise repair the awful, sour taste of part five with the aptly titled Jason Lives, taking horror fans back to basics. More importantly, the sixth installment finally introduces the world to the zombified killing machine with superhuman strength we know and love. Writer and director Tom McLoughlin brings the Tommy vs. Jason storyline full circle a few more years later and returns the newly-awakened Jason to his old stomping grounds at Camp Crystal Lake. Adding to this entry's importance in the series is the campy, tongue-in-cheek humor mixed with the gory, über-bloody violence and the outrageously creative kills, starting with the ridiculously over-the-top, Frankenstein-like resurrection scene. While I can admit to its drawbacks, the movie is particularly memorable for me since it is the first Jason movie I watched in theaters and instantly fell in love with the unstoppable walking corpse who popped out of nowhere. No matter how fast you run, he's always ahead of you. (Movie Rating: 3/5)

With the last movie introducing the supernatural element to the series, the filmmakers of The New Blood take it further into paranormal depths with the silly angle of telekinesis. Special effects and makeup artist turned director John Carl Buechler manages to produce some mildly hairy moments and competent jump scares, but he never really overcomes the plot's inherent goofy premise. Whereas Tommy made a monumentally stupid mistake, psychic heroine Tina basically revives Jason intentionally. Unfortunately, stupidity appears to run rampant in anyone remotely near Crystal Lake, and pretty much every character is cheap fodder for the slaughter. Thankfully, Jason ransacking a tool shed full of fun goodies makes the seventh entry watchable with unintentionally hilarious deaths. Also, this is arguably most fans' favorite version of the unstoppable monster of Crystal Lake, thanks to the awesome Kane Hodder. Sadly, it all stumbles to the mud with arguably one of the dumbest conclusions in the series. (Movie Rating: 2/5)

After wasting the first hour of Jason Takes Manhattan aboard a small cruise ship with recent graduates on their senior trip, the script's expectations implied by the title are finally met . . . only to waste the remaining forty minutes running through alleys, docks and subways. Once again, fans must stomach the company of highly unlikeable characters, like conceited socialite Tamara and Peter Mark Richman's prick biology teacher. Thankfully, Jensen Daggett's "Final Girl" Rennie makes the death ship and the five-minute tour of Manhattan more bearable, and Hodder's zombified Jason portrayal in this entry, for me, is the true beloved cultural icon, especially when he puzzlingly looks at the billboard. And as before, this eighth installment comes with a large helping of nostalgia. Walking out the cinemas, I was certain Jason was permanently dead by absurdly dissolving in toxic waste. (Movie Rating: 2.5/5)

Obviously, our favorite hockey-mask wearing monster is eventually resurrected four years later, proving he still has a beating heart in Jason Goes to Hell. But to my amazement, this time around, the filmmakers don't make an effort to explain Jason's return. Instead, director Adam Marcus jumps directly into a big action sequence where the unstoppable killer is blown to smithereens. The only supernatural element carried over from previous installments is an utterly stupid premise of Jason's soul possessing others and an unknown evil Voorhees bloodline. However, not all is lost since the movie can be enjoyed as a cleverly elaborate, hugely subtle, tongue-in-cheek troll on horror-hounds. Marcus takes the campy, twisted sense of humor of the series and runs with it, sprinkling the story with various allusions. He also brings Jason's paranormal storyline to an obnoxiously loud yet cartoonishly hilarious conclusion with a memorable wink to a showdown between two horror icons. (Movie Rating: 2.5/5)

Jason's five-film journey to hell arrives with strong, generally satisfying 1080p/AVC MPEG-4 encodes. In fact, The Final Friday comes the best improvement, thanks to a brand-new 2K remaster of the original elements, showing excellent definition and resolution for a majority of the movie's runtime. Of course, the dated visual effects bring the overall presentation down a couple notches, and the newly-added footage in the unrated "Director's Cut" has not aged well, painfully sticking out like a machete through the chest in some spots. Nevertheless, the movie enjoys a welcomed uptick overall, equipped with stronger black levels and great visibility in the deep, dark shadows. The 1.85:1 image also displays a superior contrast balance with brighter, more dynamic whites, and the palette shows richer saturation in primaries while secondary hues have a bit more snap and spirit.

Meanwhile, the other movies persist the same as their HD predecessors with A New Beginning and Jason Takes Manhattan looking best from this remaining lot, displaying excellent clarity and detail for a pair of this caliber and limited production. Fine object and textural details are plainly visible and distinct, exposing minor blemishes and negligible imperfections in the architecture, background furniture and healthy facial complexions. The other two movies hold their own, however, particularly during daylight sequences although the diffusion photography of New Blood comes with a noticeably soft, dreamy look. A couple sequences here and there also show their age with mild poor resolution, but it's nothing terribly egregious and likely inherent to the source used.

On a more positive note. all five films come with a nice thin layer of natural grain, though it can occasionally fluctuate a tad. Aside from the seventh entry affected by the stylized cinematography, contrast is comfortably bright and well balanced with mostly clean, crisp whites. Black levels are true and accurate with strong delineation in the deep, penetrating shadows, providing each picture some pleasing dimensionality. Colors appear bold and well saturated with reds especially looking energetic and animated, not just in the vibrant clothing but also in the full, crimson shades of the blood.

Back and forth comparisons also reveal that Jason slashes into home theaters with what appears to be the same DTS-HD MA soundtracks as before. Only this time, fans are treated to lossless mono and stereo tracks for the first four movies while Final Friday materializes with what seems like a new 5.1 surround mix. Those options alone make each entry a good and enjoyable listen even though it's not by a significant margin.

Dialogue reproduction is well-prioritized and intelligible from beginning to end while dynamic range feels cleaner and more detailed with the mids coming in a tad warmer and displaying better acoustical details. There still remains some minor hissing and noise during the loudest segments, but overall, the soundstage is engagingly broad with good background activity in the off-screen space. Also, bass is a bit more palpable and weighty here than in their respective predecessors.

Likely coming from the same remastered video, the Jason Goes to Hell mix is the biggest win with a more extensive and better-defined mid-range and improved clarity in the upper ranges. Manfredini's score benefits most, displaying stronger acoustics and distinction as it spreads evenly across the soundstage and into the surrounds, widening the soundfield with amusing effectiveness. Rear activity remains relatively the same as a few atmospherics randomly bounce between channels with decently satisfying results. Meanwhile, the low-end delivers a welcomed, weighty punch and presence to the action sequences and music.