Wings of the Hawk 3-D

Van Heflin and Julia Adams star in the roaring adventure Wings of the Hawk. Directed by Budd Boetticher, this action-packed Western happens to be the first film composed for 1.85:1 and Universal's second 3-D feature film - and it's glorious. The movie is a great show with solid performances from its lead stars, but with 3-D, it comes to vivid life with incredible deep-focus photography. With another masterclass restoration from 3-D Film Archive, this classic Western gets to live on as it's meant to be seen on 3-D Blu-ray from Kino Lorber Studio Classics with a terrific transfer, an amazing audio mix using the original 3-channel stereo, and some great informative features including the funny Woody Woodpecker cartoon Hypnotic Hick. If you're a 3-D fan, this is an essential piece of the collection. Very Highly Recommended.

American prospector Irish Gallager (Van Heflin) has finally struck big on his claim in northern Mexico. With revolutionaries on one side and the local Federales led by the cruel Colonel Paco Ruiz (George Dolenz) on the other, Irish and his partner didn't start trouble - so trouble wouldn't find them. But when Ruiz set his sights on Irish's mine leaving his partner dead in the attack, Irish forms an uneasy partnership with the beautiful revolutionary Raquel Noriega (Julie Adams) and her ragtag army. If either Raquel or Irish hope to make it out alive, they'll have to trust each other and find a way to arm their poorly outfitted band of misfits and take the fight to Ruiz and the Federales. 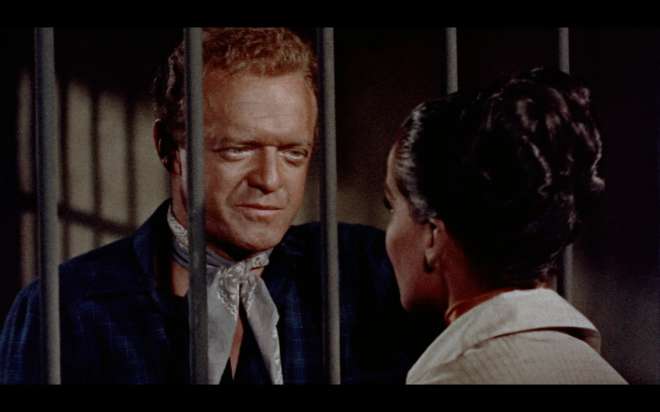 Wings of the Hawk is a classic BIG movie. Not just in the story but it's scope and production. This is a movie where you see every penny of the budget on the screen. Not only is this Universal's second 3-D film after It Came From Outer Space, but it's also the first film to be composed for 1.85:1 giving the audience some amazing big-screen action. Director Budd Boetticher was no stranger to action-packed westerns having made the solid Audie Murphy feature The Cimarron Kid and war films with the tense thriller Red Ball Express. Here he combined both efforts with an intimate character-driven drama/romance against the backdrop of the Mexican Revolution. While he apparently hated the idea of shooting the film in 3-D and using gimmicky photography of people or objects poking the audience in the eyes - he instead focused on capturing the grand scope of a western adventure.

Every shot in this film - from the wide-open vistas to the small interiors - captures an incredible deep focus with a natural feeling of three-dimensional depth. This movie works well flat in 2-D, but it really opens up and becomes something grand when you can look out over the horizon and feel that distance in three dimensions. There's an exciting prison break sequence that is full action that looks fine in 2-D, but in 3-D earns extra excitement as a trio of Federales fire a mounted machinegun into the camera. You get that rich depth without it feeling like a forced gimmick.

And while this is a rip-roaring western adventure - it's also a nice character-driven film with a great cast. Van Heflin - who more or less plays a similar version of the same everyman character he's always played - is in great form here. He slings off the whit and charm with ease while jumping into action sequences with gusto. There's plenty of full-gallop horse chases where it's quite clear he and other cast members were doing their own riding stunts - all in 3-D to give extra tension of the chase! Then we have Julie Adams as the lovely Raquel. Considering the genre, it's nice to see a female lead wearing the pants - literally and figuratively. She's up for the action just as much as anyone else in the film and is never the simple damsel waiting to faint into Van Heflin's arms.

The rest of the cast is great too. George Dolenz is a terrific slimy villain. Rodolfo Acosta easily slides into the spurned lover role. Pedro Gonzalez Gonzalez is a crack up as the comic relief Tomas - a welcome trait he'd bring to Rio Bravo and other classic Westerns. Also, it's fun to see is Antonio Moreno as Father Perez who would get to share some more three-dimensional screen time with Julie Adams in 1954's classic The Creature from the Black Lagoon.

At 81-minutes, the film moves fast and gallops through the plot and action, but never feels rushed. Van Heflin's simple opening narration sets up the story and then we're right in it. Within minutes George Dolenz's Ruiz is riding up and we know he's up to no good. When we meet Julie Adams's Raquel we know she's not your traditional female lead. While an eventual romance with Irish is expected, it's not the first thing that happens when they meet. We get a lot of plot and character development peppered throughout to setup the stakes and give the film a sense of urgency. It's a lean, efficient story but you never feel cheated. Plot turns happen naturally and character arcs come to fitting conclusions.

I'd always wanted to see this movie, I'm a true Western Junkie and after 3:10 to Yuma, Shane, and what I consider the very underrated Tomahawk - I'm also a Van Heflin fan. But I could never find Wings of the Hawk. The time or two that it was on TCM I wasn't anywhere near a television with cable to watch it. Any DVD release was never in my orbit that I could rent it. So it slipped past as one of those curiosities I'd hope to find in the wild one day. That day finally came this week. Thanks to 3-D Film Archive and Kino Lorber Studio Classics we can now enjoy Wings of the Hawk as it was meant to be seen with a quality presentation in 3-D or 2-D. I was very entertained by this one and look forward to watching it many more times to come.

Wings of the Hawk charges onto 3-D Blu-ray thanks to Kino Lorber Studio Classics with restoration work by 3-D Film Archive. This single-disc release is pressed on a Region A BD-50 disc and housed in a standard keepcase. If your television is 3-D enabled, the disc automatically loads to 3-D, in the main menu there's an option to view the film in 2-D. The rest of the menu options including bonus features and audio are presented in a traditional menu structure. The default audio option is the DTS-HD MA 3.0 stereo mix. 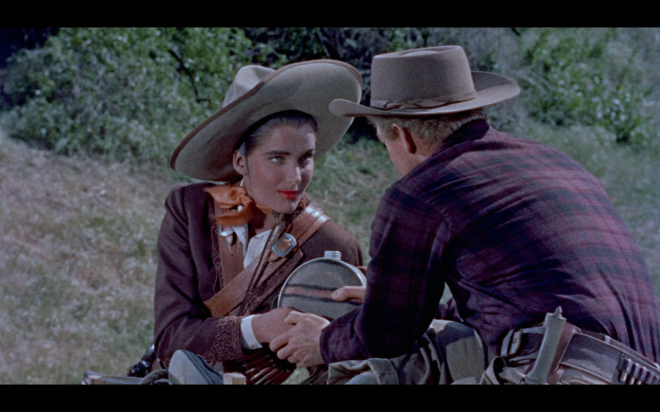 Considering their stellar output to date, any 3-D Blu-ray fan should be very excited whenever the 3-D Film Archive team is involved in a new release - and Wings of the Hawk is no exception. This is another impeccable example of their terrific restoration work. It's honestly getting harder and harder to point out which title is the best of the best of their work. Wings of the Hawk is now in my top tier favorites of their releases alongside GOG, It Came From Outer Space, and Sangaree.  With the expansive wide vistas, there's little about this movie to feel boxed in by the studio lot - this film makes you feel like you're out on the open range.

Because Budd Boetticher didn't like gimmicky 3-D shots with objects constantly poking the audience, he focused on the deep space and this image's Z-axis feels like it goes off into the infinite distance. While he didn't intend for gimmicky shots, there are plenty of protruding depth examples to be enjoyed - a mounted machine gun firing at the camera is one of the most intense examples. Every shot offers some amount of appreciable close, middle, and distant depth objects. And because of the deep-focus photography, there's never any eye strain. Even during fast-paced action sequences like when Irish is ridding away from Ruiz, the galloping horse is in the middle ground with his pursuers in the deep background, the camera keeps with this framing bringing real urgency to the chase. 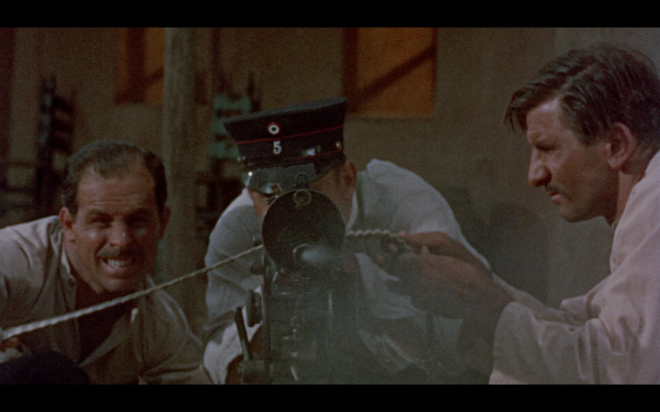 The restoration work is top-notch allowing for appreciable fine details, robust colors, and a natural film-like grain structure. And with Technicolor, those primaries really do pop nicely. The elements are in great shape without any notable age-related issues to speak of. Common for the era, optical transitions feature some shift in quality, colors soften, elements can appear a little rough, and grain can thicken, but that's a cooked in effect of the process.

Because the film wasn't entirely focused on gimmicky 3-D effects, flat 2-D is actually a welcome viewing as well. I do feel the best attributes of this film's composition and this restoration come to life in 3-D, but this film is effective in 2-D. The image is clean without issues. It's a mark of good filmmaking that Wings of the Hawk doesn't absolutely have to be seen in 3-D to be enjoyed, but that said, 3-D really punches things up a notch and the action lends itself well to the format. 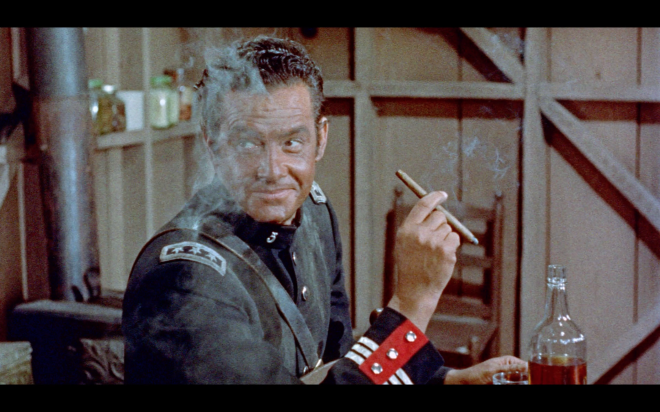 Wings of the Hawk also comes packed with a pair of excellent audio mixes, a DTS-HD MA 5.1 track, and a fully restored DTS-HD MA 3.0 stereo mix. While the full 5.1 track is pretty good, I'm a bit of a naturalist when it comes to classics so I'm throwing my preference behind the three-channel stereo track. This mix hasn't been heard since its theatrical run in 1953 and the 3-D Film Archive did a great job restoring it. The dialog is clean and clear. Action effects like gunshots and explosions or multiple galloping horses traverse the soundscape with ease and clear object placement. Scoring is top-notch and adds to the romance, action, and some of the comedic beats the film offers. Clean of any age-related issues like hiss or pops and scratches, this is a great mix that really comes to life. 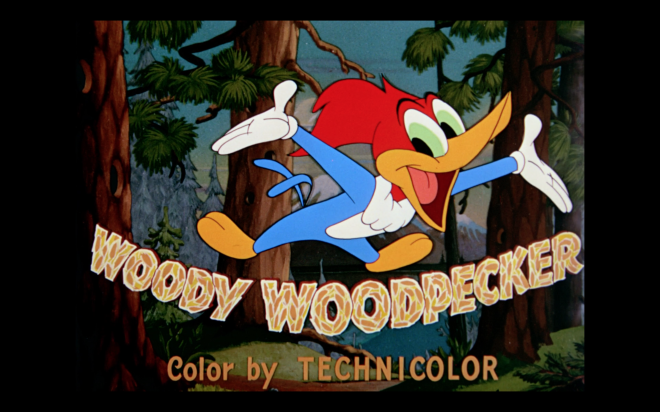 This release also comes with some great bonus features. You get a very informative full-feature commentary by Film Historian Jeremy Arnold, a really interesting 20-minute mini-commentary from 3-D expert Mike Ballew which is awesome if you're interested in the technical aspect of the film. On top of that, 3-D Film Archive also restored the Woody Woodpecker short Hypnotic Hic with impressive results. It'd been ages since I actually sat down and watched Woody Woodpecker cartoon and I'd forgotten how funny they could be - even if that laugh can be a bit obnoxious after a bit. All in all a pretty solid little package of bonus materials.

I love a good western and I have a deep-seated love for 3-D so Wings of the Hawk checked off a couple of boxes for me. But, what makes Wings of the Hawk work so well is the terrific direction from director Budd Boetticher and the great performance from his key cast including Van Heflin, Julia Adams, and George Dolenz. The action is fast, the drama rich, and the romance effective without getting bogged down in mushy stuff. Characters are quickly drawn to simple archetypes but earn a meaningful arc. All of these great elements come to life with rich vivid 3-D photography that has been lovingly restored by 3-D Film Archive. This is yet another terrific release from 3-D Film Archive and Kino Lorber Studio Classics giving fans an impressive three-dimensional transfer (which looks good in 2-D too), two great audio tracks, and an informative bonus features package. If you love westerns, this is a very entertaining movie. If you love classic 3-D movies, this is an essential piece of the collection ready to come home. Highly Recommended.