Marlene Dietrich teams up with John Wayne for the first time in Seven Sinners, a rollicking South Seas yarn about a shady lady's romance with an upstanding Naval officer. A top-notch supporting cast enlivens this uneven, unfocused film that's a showcase for the divine Miss D. Kino's transfer could use some clean-up, but solid sound and an entertaining commentary track enhance the disc's appeal. For Fans Only.

Before Rick's Café Américain, there was 7 Sinners, a sultry South Seas saloon that attracts a similar cast of colorful characters. The popular gin joint on an exotic island in the Philippines isn't half as classy as Rick's, but it's twice as raucous, and it's where most of the action transpires in Seven Sinners, a wild and very crazy romantic comedy that takes more than a few leaves from the Destry Rides Again playbook. The rough-and-tumble Destry revived Marlene Dietrich's faltering career after a group of theater owners labeled her "Box Office Poison," and Seven Sinners tries its best to duplicate the winning western's formula and keep Dietrich's resurgent star on the rise.

It succeeds on both counts, but as hard as the copy tries, it can't best the original, despite a climactic no-holds-barred barroom brawl. Once again, Dietrich portrays a woman of questionable virtue and repute (this time named Bijou) who bounces from one port to another after her party-girl antics repeatedly spur her deportation. The sultry singer ultimately lands on the isle of Boni-Komba and lands a gig at the 7 Sinners. She also tries to land Lieutenant Dan Brent (John Wayne), a dashing, honorable officer who strikes the fancy of the governor's virtuous daughter, Dorothy Henderson (Anna Lee), as well.

Bijou wins Dan's affection, but her reputation for driving men to ruin doesn't sit well with his military superiors, who urge Dan to cut her loose. Will Dan choose duty over love? And will Bijou finally stop roaming - and reveling - and find both a safe harbor and safe haven? 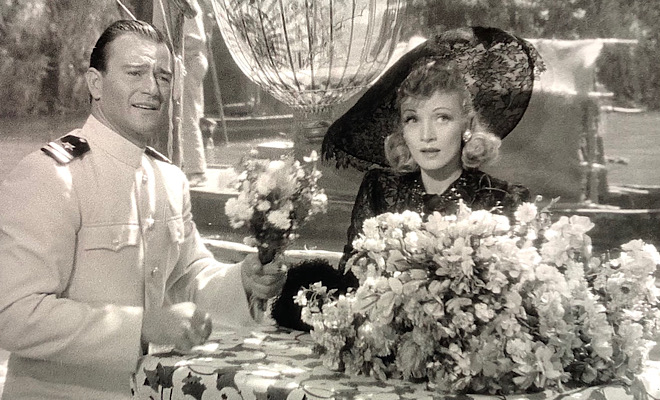 The flimsy story lacks both substance and originality, but director Tay Garnett, best known for helming the steamy Lana Turner-John Garfield version of The Postman Always Rings Twice, keeps things rolling with plenty of slapstick hijinks, an exotic island flavor, and a few musical numbers that show off Dietrich's smoky, moaning vocals and palpable magnetism. The best of these is "The Man's in the Navy," which offers up an androgynous Dietrich in full Navy regalia. Few, if any, female stars look more comfortable in men's clothing than Marlene, yet somehow she still radiates the same degree of sexual heat. Her array of gowns and flamboyant feminine get-ups, many of which are adorned with either feathers, veils, or sequins, are equally stunning and further cement Dietrich's standing as one of Hollywood's premier fashionistas. (Credit Irene with crafting the fetching costume designs.)

Wayne, fresh from his triumph in John Ford's Stagecoach the previous year, carries himself well and does what he can with a cardboard role. Though he might seem like an odd leading man for the sophisticated Dietrich, Wayne brings the diva down to Earth, and the two ignite some sparks. According to Garnett, as quoted in Charles Higham's 1977 biography of Dietrich, the first time Marlene laid eyes on Wayne in the Universal commissary "she swept past him, then swiveled on her heel and looked him up and down as though he were a prime rib at Chasen's. As we sat down, she whispered in my right ear, 'Daddy, buy me that!'...Their relationship got off like a fireworks display. They were crazy about each other..." And the public was crazy about them together...so much so, Dietrich and Wayne would make two more pictures together, The Spoilers and Pittsburgh. 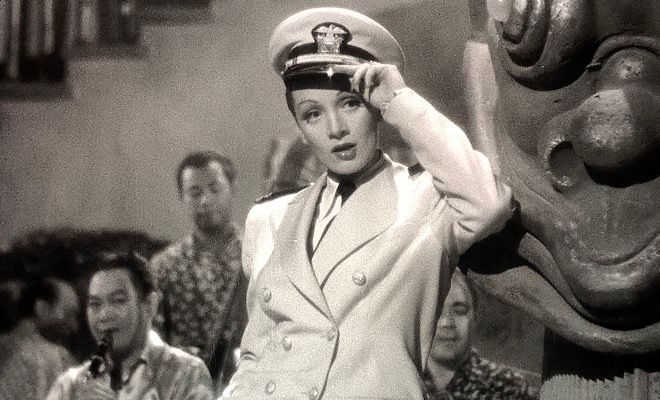 The supporting cast is a who's-who of Hollywood character actors and all of them get their chance to shine. Burly Broderick Crawford (who was just 28 at the time, although he looks about 40) and the always amusing Mischa Auer play Bijou's loyal sidekicks, and such stalwarts as Albert Dekker, bug-eyed Billy Gilbert, Samuel S. Hinds (Jimmy Stewart's dad in It's a Wonderful Life), Reginald Denny, and the villainous Oskar Homolka make equally strong impressions. Their inimitable personalities enliven the proceedings and help us better tolerate the preposterous plot.

In the end, though, Seven Sinners is all about Dietrich - her sullen persona, her impeccably lit close-ups, her fabulous outfits, her suggestive songs - and the rejuvenated actress rides this tailor-made star vehicle for all it's worth. Just as she enjoyed kicking up her heels and getting down and dirty with Una Merkel in their famous catfight in Destry Rides Again, Dietrich seems to relish spoofing the fallen women and long-suffering dames she portrayed so convincingly when she was the muse of director Josef von Sternberg. Seven Sinners may be forgettable, but it's fun while it lasts, and Dietrich gets the last laugh. 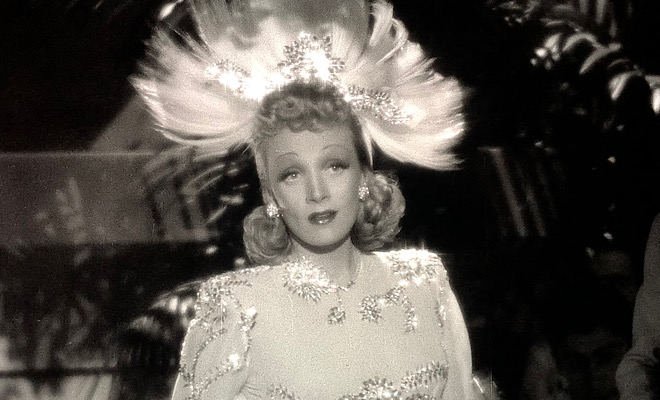 Seven Sinners arrives on Blu-ray packaged in a standard case. Video codec is 1080p/AVC MPEG-4 and audio is DTS-HD Master Audio mono. Once the disc is inserted into the player, the static menu with music immediately pops up; no previews or promos precede it.

Seven Sinners features stunning cinematography by the esteemed Rudolph Maté, but sadly, the 1080p/AVC MPEG-4 transfer from Kino doesn't properly honor it. While clarity and contrast are quite good, a plethora of print damage constantly draws attention away from the lovely imagery. White vertical lines, blotches, and assorted nicks and marks plague the print throughout, and heavier than normal grain slightly dulls the picture's impact. On the plus side, blacks are wonderfully rich, shadow delineation is excellent, and Dietrich's white feathery outfit, white furs, and the men's white Naval uniforms are vivid and stable. Nicely varied grays enhance depth, background details and the sparkling sequins on Dietrich's gowns are easy to discern, and sharp close-ups showcase Dietrich's trademark sunken cheeks and the sweaty, scruffy faces of the men.

The makings of a dazzling transfer are here. It's just a shame some restorative work couldn't have been performed on Seven Sinners prior to its Blu-ray release so this beautifully photographed movie could be seen as originally intended.

The DTS-HD Master Audio 2.0 mono track supplies clear, well-modulated sound. Dietrich's moaning, guttural vocals sound rich and full, a wide dynamic scale embraces the highs and lows of the music score without any distortion, and all the dialogue is easy to comprehend. All the ambient nightclub noise is distinct, sonic accents like fisticuffs and shattering glass are crisp, and no age-related hiss, pops, or crackle intrude.

Seven Sinners gloriously showcases the timeless allure of Marlene Dietrich - which is certainly its raison d'être - but the film as a whole lacks focus and relies too heavily on the goofy antics of its sterling supporting cast to maintain interest. Kino's transfer could use some restorative work, but the audio is good and a fun commentary track helps bolster the appeal of this boisterous South Seas yarn that Dietrich devotees will devour. For Fans Only.