John Wayne and Robert Ryan take to the skies in Flying Leathernecks, director Nicholas Ray's rousing aviation drama about a Marine squadron's dangerous aerial missions in the Pacific during World War II. While the pedestrian story brims with cliches, the exciting battle sequences intermingled with actual war footage and beautiful Technicolor photography keep the film aloft. A brand new 4K restoration from the original Technicolor camera negative yields a dazzling five-star transfer that's pure bliss from the first frame to the last. Flying Leathernecks may not stand as one of Hollywood's greatest World War II movies, but thanks to this impeccable presentation, you won't be able to take your eyes off it. Recommended.

Aviation held a special fascination for billionaire Howard Hughes, a gifted engineer and visionary who helped pioneer the industry in its formative stages. So when Hughes, who dabbled in moviemaking since the dawn of sound, took over RKO Radio Pictures in 1948, it's not surprising he went all in on a lavish aerial drama that would salute a squadron of brave World War II Marine pilots. The resulting film, Flying Leathernecks, may be pitifully pedestrian from a narrative standpoint, but from a combat perspective it soars. That's largely due to Hughes, who demanded director Nicholas Ray incorporate actual military battle footage into the movie, thus adding a welcome dash of realism that most Golden Age Hollywood war films lack.

Flying Leathernecks chronicles the dangerous missions of Marine Fighter Squadron VMF 247 - nicknamed the Wildcats - and the tensions between the outfit's two commanding officers. Major Daniel Kirby (John Wayne) is a macho, no-nonsense, by-the-book leader who values efficient, clean missions above all else. He expects his men to deliver under pressure and comport themselves with courage, honor, and dignity, even when gripped with fear.

His executive officer, Captain Carl "Griff" Griffin (Robert Ryan) takes a more sensitive tack. Griff deals with his men on a more personal level and tries to understand and address their frailties. Kirby and Griffin clash repeatedly on the ground and occasionally in the air as they doggedly fight their Japanese foes in the battles of Guadalcanal and Okinawa. 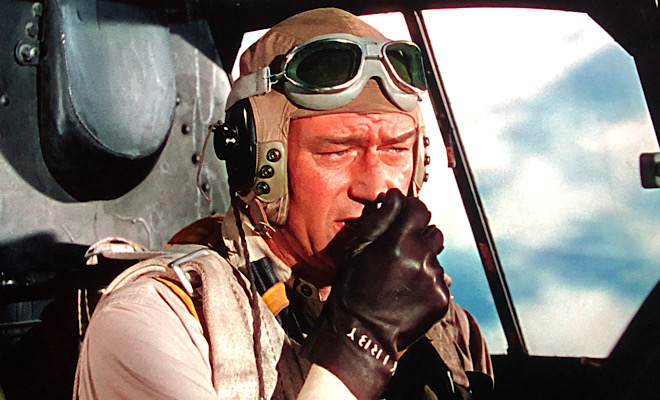 Flying Leathernecks doesn't fit the mold of most films directed by Ray. It's formulaic, packed with patriotic propaganda, and populated by cardboard, stereotypical characters. The script may lack substance - the domestic scenes between Kirby and his wife Joan (Janis Carter) are especially insipid - but Ray does his best to infuse the battle scenes with plenty of style. The Technicolor cinematography makes the action feel more immediate and Ray's visual flair increases the excitement quotient. Sure, the processed cockpit shots look fake, but the overall package, which includes the interpolation of actual color war footage, is slick and involving.

Just like their characters, Wayne and Ryan clashed on the set. Their divergent political views during the height of the Hollywood Red Scare - Ryan was a liberal while Wayne was a staunch anti-Communist conservative and proponent of the blacklist - caused friction. In addition, rumor has it the left-leaning Ray made Flying Leathernecks to align himself with the right-wing Hughes, who he hoped would provide some shade for him during such a turbulent, frightening period. (If true, the scheme worked.) 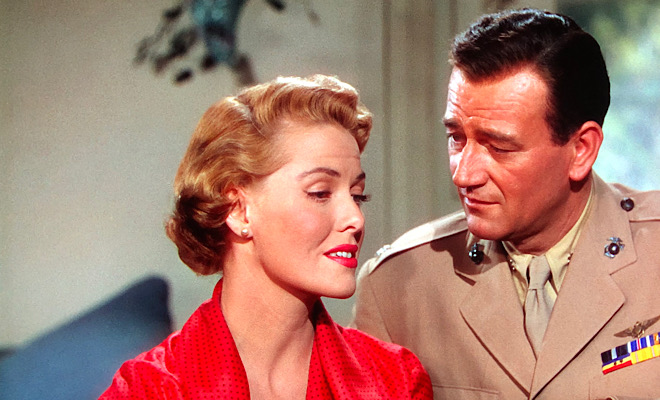 Wayne files his typical square-jawed performance laced with tough-guy charm. He takes command of his forces and in the process commands the screen. Though he creates some nice chemistry with Carter, his duty-first, family-second character is too cut-and-dried to be wholly believable, despite the fact Kirby is based on Major John L. Smith, a real-life military figure who received the Medal of Honor for his service in the Pacific.

Ryan has a slightly more interesting and dimensional role, but it doesn't give this accomplished actor many chances to show off his talent. (Ray would give Ryan a far better opportunity to strut his stuff in the classic film noir On Dangerous Ground, made later the same year.) In supporting parts, Don Taylor (The Naked City, Father of the Bride), Jay C. Flippen, Adam Williams (North by Northwest), and a host of other recognizable faces supply color and grit.

Flying Leathernecks is rousing, often exciting, and expertly directed, but remains a lightweight, routine World War II film. See it for the well-executed battle sequences and beautiful Technicolor photography, but don't expect to be wowed by the story or performances. Like a good soldier, Flying Leathernecks does its job, and when it's finished, it gets a cursory slap on the back. 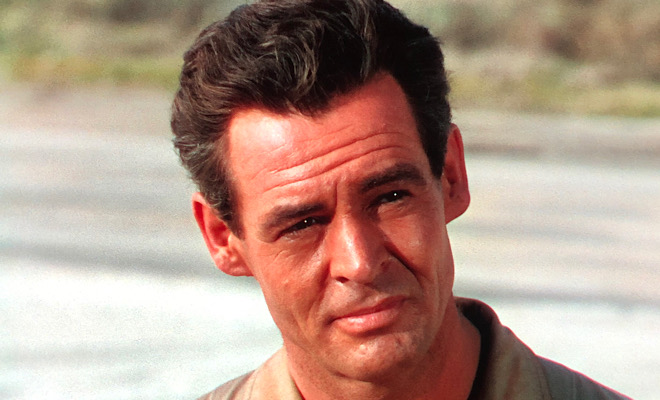 Flying Leathernecks arrives on Blu-ray packaged in a standard case. Video codec is 1080p/AVC MPEG-04 and audio is DTS-HD Master Audio 2.0 mono. Once the disc is inserted into the player, the static menu without music immediately pops up; no previews or promos precede it.

The movie itself may be typical, but the transfer is anything but. A new 4K restoration from the original Technicolor camera negative yields an absolutely stunning 1080p/AVC MPEG-4 transfer that's a joy to behold from beginning to end. Exceptional clarity and contrast and perfectly balanced color produce a dazzling picture that still looks incredibly film-like. Faint grain supplies necessary texture, and though the cutting between the rougher-looking authentic battle footage and silky smooth recreations staged by the crew can be a bit jarring, it's a treat to see the archival shots.

Unlike musicals, war films don't always maximize the impact of Technicolor, but Flying Leathernecks does its best by inserting sporadic splashes of vibrant color to catch the eye. The yellow, red, and magenta canvas panels, billowy orange flames, blue sea, and bright red lipstick on actress Janis Carter provide such striking visual accents it's easy to forgive the artificial-looking blood, which resembles - and just might be - red paint. 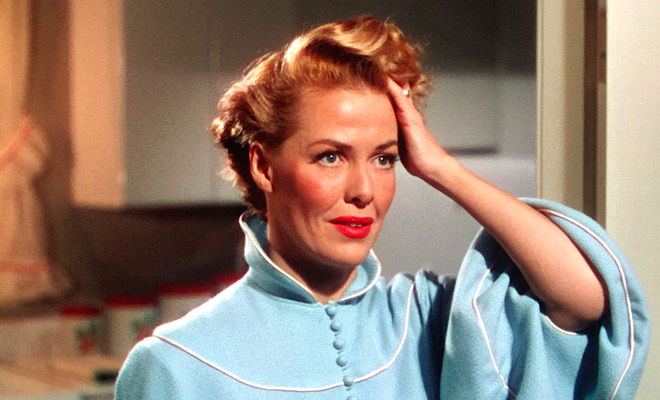 Black levels are rich, shadow delineation is quite good, and fine details are so crisp we can clearly make out the embroidered name tags on the soldiers' uniforms in medium-range shots. Razor sharp close-ups highlight beads of sweat, facial pores, and the rugged complexions of the various soldiers. Even when the story sags, this impeccable transfer keeps us riveted and guarantees a couple of repeat spins so we can revel in its splendor.

The DTS-HD Master Audio 2.0 mono track highlights an array of war movie sound effects, including explosions, plane engines, gunshots, and crackling flames. A wide dynamic scale handles all the rumbling, as well as the highs and lows of Roy Webb's patriotic music score, without any distortion, and all the dialogue is well-prioritized, clear, and comprehendible. A bit of faint surface noise can be detected early on during quieter scenes, but you really have to listen for it. Though the audio doesn't burst forth with  visceral power, it's bold enough and nicely complements the on-screen action.

A two-minute reissue theatrical trailer is the only extra on the disc.

Flying Leathernecks is standard war movie fare, but Nicholas Ray's muscular direction and a spectacular 4K restoration from the film's original Technicolor camera negative elevate this aerial drama about Marine fighter pilots during World War II. John Wayne, Robert Ryan, and a lively group of supporting actors do what they can with a mediocre script, but it's the exciting battle sequences intermingled with archival footage of actual skirmishes that keep the film aloft. The impeccable transfer is a joy to behold and makes this disc worthy of a purchase even if you're not a John Wayne fan. Recommended.