Why do you make me do it?" New York cop Jim Wilson asks the hoodlum he's about to smash senseless. Jim has seen it all on the city's shadowy streets: killers, thugs, pimps, sadists. And the experience has cost him his soul. Ironically, his redemption may come in his next case, a brutal murder that brings him into the open sky and white light of the countryside…and into the arms of a beautiful blind woman. Directed with intensity by Nicholas Ray (Rebel Without a Cause, They Live by Night) and featuring a haunting score by Bernard Herrmann (Psycho), On Dangerous Ground is a taut, rapid-paced manhunt with two fine stars at its tortured heart. Noir master Robert Ryan captures Jim's agonized self-hatred. And Ida Lupino burnishes the screen as the sightless angel whose compassion gives him one last chance at life.

"Nobody likes a cop on either side of the law. Nobody."

Outsiders are the heroes of choice for director Nicholas Ray. Cynical, disillusioned, a bit tortured, and above all, achingly lonely, the complex men who populate Ray's films bury their feelings beneath a tough veneer and internalize their simmering angst until it explodes. Far from traditional, these "heroes" often stray from the straight and narrow, taking a detour into an ambiguous abyss where they struggle to find both their footing and identity. Do they sink to the bottom or claw their way out? Do they crash and burn or achieve redemption? Those are the probing questions Ray so deftly explores, and the answers aren't always predictable.

Jim Wilson (Robert Ryan) is one of those "heroes," and 'On Dangerous Ground' astutely depicts his turmoil. Though it's not one of Ray's best known productions (it failed miserably at the box office at the time of its release, but has since garnered well-deserved respect), this efficient, dichotomous tale casts a fascinating spell that helps mask its faults. Unique in structure, 'On Dangerous Ground' begins as a gritty film noir, but slowly evolves into a tender romance peppered with a sprinkling of gothic mystery. Yes, that's a strange brew, but the movie's off-kilter nature reflects the vulnerability of its characters, who ultimately overcome the uneven - some might say choppy - story.

A loyal, dedicated urban detective for 11 years, Jim lives by himself in a tiny apartment and eats, drinks, and breathes his beat. But a life spent pursuing "crooks, murderers, winos, stoolies, and dames, all with an angle" has taken a toll on him, fueling a growing disgust with both a degenerate society and a justice system with too many constraints. Unable to control his temper (shades of 'Where the Sidewalk Ends'), he begins abusing suspects, much to the chagrin of his partners and commanding officer, who plead with him to "take it easy." "Make up your mind to be a cop," his captain tells him. "Not a gangster with a badge."

Yet Jim can't stem his behavior, and after another violent scuffle, he's banished to the frigid, mountainous hinterlands and tasked with helping a rural sheriff solve the murder of a young girl. Away from the scummy city, Jim ironically becomes the voice of reason in a foreign environment where good and evil aren't as cut and dried. He tries his best to calm the victim's vengeful father (Ward Bond), especially when they come upon a remote cottage inhabited by Mary Malden (Ida Lupino), a cryptic blind woman who may know more about the killing - and killer - than she initially lets on. Mary, who's also a lonely outsider, is instantly drawn to Jim, and their spiritual connection spawns an intimate trust that's tested as the investigation proceeds.

The first half of 'On Dangerous Ground' is a riveting, realistic portrait of police life filled with subtle, atmospheric details and photographed with a muscular urgency that grabs and focuses attention. (On a couple of occasions, Ray employs a handheld camera - revolutionary at the time - to put us in the thick of the action and ratchet up excitement.) But when the narrative transitions from the city to the country, the film takes a stylistic left turn, adopting a more sedate, poetic, and introspective tone. Though the jarring shift is a deal-breaker for some viewers, it's essential for Jim's growth and development, and distinguishes the movie from others in its genre.

'On Dangerous Ground' was shelved for almost two years prior to its release, as eccentric RKO studio chief Howard Hughes tinkered endlessly with the film, rearranging scenes, making cuts, and demanding reshoots to fill in narrative gaps caused by his interference. Though some abrupt edits occasionally disrupt the picture's flow and the ending is too abrupt and convenient, it's amazing the story hangs together as well as it does. That's largely due to Ray's assured direction and fine performances from Ryan and Lupino, both of whom fully embrace their roles. In a rare sympathetic turn, the square-jawed Ryan nicely underplays, hiding all the emotions that fuel his actions, while the luminous Lupino - who doesn't even appear until the picture is about half over - is beautifully expressive as the conflicted blind girl who can see inside people's souls. The two worked so well together they would re-team a couple of years later for another tense yarn, 'Beware, My Lovely.'

Romance and noir are far from strange bedfellows, but they've rarely been paired in this manner. 'On Dangerous Ground' goes against the grain, and though it doesn't completely succeed, it remains a fascinating film, and its appeal and emotional impact increase with subsequent viewings. It doesn't quite rise to the level of Ray's most famous movies, but it's a solid effort that deserves recognition 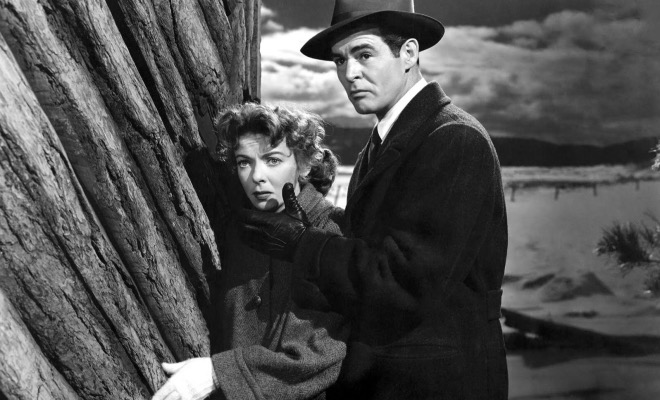 'On Dangerous Ground' arrives on Blu-ray packaged in a standard case. Video codec is 1080p/AVC MPEG-4 and audio is DTS-HD Master Audio 2.0 mono. Once the disc is inserted into the player, the static menu without music immediately pops up; no previews or promos precede it.

'On Dangerous Ground' boasts a quality 1080p/AVC MPEG-4 transfer that honors the film's naturalistic and occasionally innovative photography. Superior contrast and clarity heighten the stark noir look, while a lovely grain structure supplies necessary texture and preserves the feel of celluloid. Black levels are deep and lush, the white snow is perfectly pitched, and solid gray scale variance punches up details and depth. Shadow delineation is quite good and crisp close-ups showcase both Lupino's simple beauty and the weathered ruggedness of the male characters. The location shooting in Colorado, handheld camera sequences, and artsy subjective shots from the heroine's visually impaired perspective all blend seamlessly into the picture's whole, and no nicks, marks, or scratches mar the print. Nicholas Ray's movies are always distinctively shot, and this terrific transfer celebrates and preserves the artistry on display.

The DTS-HD Master Audio 2.0 mono track supplies clear, well-modulated sound that nicely complements the various moods of this film noir. During the movie's first half, sonic accents like car horns and gunfire are wonderfully distinct, while subtle nuances in the quieter second half, such as wind chimes and snow crunching under foot, are also well rendered. Excellent fidelity and tonal depth enhance the impact of Bernard Herrmann's powerful music score, and a wide dynamic scale handles all its soaring highs and lows without a hint of distortion. Best of all, every bit of dialogue is easy to comprehend, and no age-related hiss, pops, or crackles disrupt the narrative. This is another kudo-worthy effort from Warner Archive, which continues to treat its classic catalogue with the utmost respect.

All the extras from the film's previous DVD edition have been ported over to this release.

A somewhat schizophrenic film noir, 'On Dangerous Ground' is a moody tale of two locales and how they - and a mysterious blind woman - impact a disillusioned and lonely New York cop. Striking, often innovative direction by Nicholas Ray and sensitive, understated performances from Robert Ryan and Ida Lupino distinguish this atmospheric film that's equal parts crime drama, love story, and whodunit. Warner Archive's Blu-ray presentation features strong video and audio transfers, a decent commentary, and a trailer. Though a bit uneven, 'On Dangerous Ground' is a probing and involving character study that's uniquely affecting, visually stimulating, and worthy of a recommendation.

Sale Price 10.95
List Price 15.42
Buy Now
3rd Party 10.95
In Stock.
See what people are saying about this story or others
See Comments in Forum
Previous Next
Pre-Orders
Tomorrow's latest releases