Eli Roth's History of Horror Season One pits the Hostel director in the position of being guide through the vast timeline of horror sub-genres. Though each episode, a different sub-genre is explored in detail through interviews with academics, filmmakers, and people who just love that kind of movie. It may not break new historical ground, but it's well constructed and it's fun to see Roth interact with various people and essentially "nerd out" about the genre they clearly love. All seven episodes arrive on Blu-ray with solid A/V presentations and a couple of hours of worthwhile bonus features. You may not learn anything new, but this was a fun tour of Horror. Recommended

Say what you will about Eli Roth's movies themselves, it's undeniable the man is a horror movie fan. As an exuberant fan of the genre, he actually makes a great host for AMC's latest genre roundtable series. In a lot of ways Eli Roth's History of Horror mirrors James Cameron's Story of Science Fiction Series. Take the genre as a whole, find a unique sub-genre, and dig through it with various popular examples while highlighting some outside entries or asks the audience to consider a different film as a member of the sub-genre. While the two series are very similar, I felt like History of Horror was a lot more fun and celebratory of the genre while also maintaining some thoughtful perspectives. 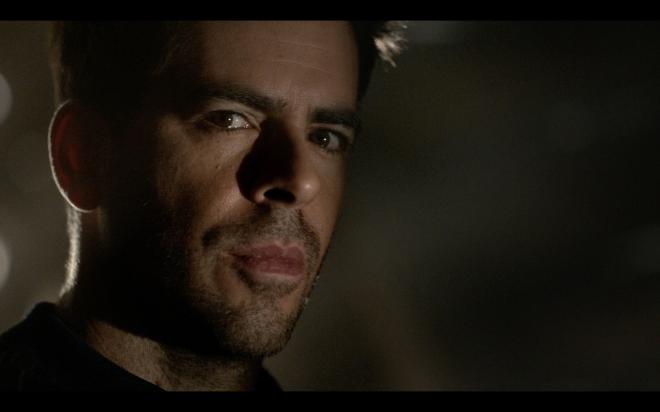 This isn't Roth hanging out with his pals going "gore is cool!" Instead, he lets his guests do 90% of the talking and make their points. His one-on-one with Quentin Tarantino that is peppered throughout each episode is a highlight because any time you can get that man to chitter about a movie or a sub-genre it's always entertaining but his points are also interesting. Tarantino is a fountain of examples. Just as great to see is the roundtable Roth does with Rob Zombie and Greg Nicotero. Nicotero brings a lot of the technical with his background in makeup effects and his time producing and directing a huge chunk of The Walking Dead and now Creepshow.

Rob Zombie doesn't interject a lot at first, but when he has something to contribute it's either from the realm of a glowing fan or he punches in a thoughtful point. Best of all are the one-on-ones with Stephen King. Again, King is a fountain of knowledge but he's also a huge fan and it was nice to hear him talk about the experience of seeing others take his work and do their own thing with it - even though he still has issues with what Kubrick did with The Shining. Throughout the rest of the series, we get some great appearances from folks like Bryan Fuller, Diablo Cody, Tananarive Due, Leonard Maltin, Leigh Whannell, Edgar Wright, Elijah Wood, Marcus Henderson, and Alex Winter among many other notable fan-favorite actors, writers, and directors.

Each episode picks apart a different horror sub-genre. Episode One is all about Zombies - which isn't surprising when The Walking Dead remains one of AMC's biggest draws as a network. But it's great that the episode wasn't just a "look how cool our show is" - it's much more referential to the work of George Romero as well as the first appearances of the creature in the early 1930s. It was a fun interlude when they make the argument and I'd agree rather successfully that Frankenstein is actually a zombie - albeit a man-made one. But there are also fun discussions into which is scarier Fast Zombies or Slow Zombies and everyone is allowed their preference and have some funny reasons why one way or the other.

Slashers get the most coverage of the entire first season earning two episodes to do the genre justice. Obviously, it wouldn't be much of a discussion of Slashers if Jamie Lee Curtis wasn't involved and she's a lot of fun. I've heard her stories before but it's how she tells them that you don't mind hearing them again at all. The first half of this two-parter examines the origins of the genre with Psycho and other classic thrillers while the second part goes after the 90s resurgence of the genre as well as Silence of the Lambs as a true Slasher film that was expertly well-made but also not allowed to be marketed or discussed as a slasher film even though it follows so many of the same tropes and genre conventions.

Episode Four spends time with demonic possession covering obvious his as Rosemary's Baby and The Exorcist and The Evil Dead. What was really interesting here is how because of the censorship and content requirements of the Hays Code and MPAA, the topic of demonic possession couldn't really be explored for decades. It wasn't until the 60s and 70s when the modern rating system took effect before filmmakers could make films depicting the devil or demons commanding the actions of an innocent human. Episode Five is all about killer creatures covering many of the classic movie monsters of Universal's classics era like The Invisible Man and Creature from the Black Lagoon. But it also goes into nature beasts like sharks, The Birds with time spent with Cujo but also the romantic humanized creatures from Guillermo Del Toro's The Shape Of Water.

Of course, any serious discussion of horror sub-genres wouldn't get far without a deep dive into Vampires and that's extensively covered in Episode Six. To the credit of the series, they don't spend a lot of time with the obvious choices. They get into modern television but also - love them or not - they actually provide a compelling defense of the Twilight novels and books. Just because they're heavily romanticized, they have a huge following and those fans shouldn't be dismissed. I don't personally care for them, I think they're perfect for Rifftrax, but I appreciate it has a loyal fanbase.

The final episode is dedicated to Ghost Stories with movies like Poltergeist getting a lot of mentions alongside genre classics as The Haunting, The Shining, and The Sixth Sense. Wha was also great to see is the cultural differences in ghost stories like the Japanese Ringu versus America's The Ring with several other examples and highlights explored.

All in all - Eli Roth's History of Horror was a fun run. At 40 odd some minutes an episode, you can easily binge through it in a couple of sittings. It's academic enough to be compelling but it doesn't get lost in the weeds to ever be boring. If you're a fan of the genre there may not be much new information provided, but with all of the major players appearing and sharing their thoughts, it's a fun showcase of talent while appreciating the genre as a whole and its many little facets. History of Horror is set to return in October this year and I'm excited to see what they do next. Even if they hit the same sub-genres again, there's still a lot of material worth diving into and exploring.

Eli Roth's History of Horror arrives on Blu-ray thanks to RLJE Films in a three-disc set. All three discs are housed in a standard sturdy 3-disc case with identical slipcover artwork. Each disc gets its own tray without being stacked on top of each other. The discs load to animated main menus with traditional navigation options. The first two discs are the episodes while disc three is dedicated strictly to the bonus features.

All seven episodes of Eli Roth's History of Horror enjoys a strong 1.78:1 1080p transfer. The host segments look the best with Roth and pals enjoying well-detailed transfer without any issues. The individual film clips are subject to source so you can see a movie like Frankenstein or Dracula that looks pretty good - but has also been reframed to fit the screen. Likewise, scenes from movies like Dawn of the Dead aren't the most beautiful ever where clips from The Walking Dead are as strong as their broadcast or home video masters. All in all, this is a good looking show that leans into dark shadowy sets for the talking head segments to give it a creepy vibe.

Each episode of Eli Roth's History of Horror comes with a decent and effective DTS-HD MA 2.0 audio mix. Since this show is so conversational with voices talking over the movie clips, there isn't much call for a full dynamic surround track. It's a pretty basic mix with moody music in the background to fill the soundscape when a clip from a particular movie isn't on screen. Bursts of dialogue from the film examples pop up from time to time but those moments are more to accentuate the point of the person speaking and not a showcase of sound design for horror films. Eli Roth does a little bit of voiceover narration here and there to set up the topic but he's a pretty minimal presence in that arena. Most of the time it's a guest talking about a movie they loved or made.

Most of the materials here are cuts that just didn't make it to the final cut of the particular episode. I can see why these conversations and points weren't included - there's so much ground to cover with each sub-genre. At the same time, it's great to see all of the material presented here. All of the extended interviews are great where they get to go slightly off-topic a bit, but the Roger Corman interview especially is welcome to see since his material didn't really get much of a presence throughout the season. Maybe they're saving him for Season 2? While these clips are relatively short and the interviews can meander a little, they're all worth picking through.

I missed out on this series when it first aired on AMC in 2018. I don't have a cable subscription so I usually have to wait for streaming so this Blu-ray release was a nice surprise. Going in I figured I'd enjoy it but wasn't sure about replay value, but now that I've picked through it once, I do actually want to start it over. It was fun! Horror is one of my favorite genres because I have so many nostalgic memories watching edited-for-television versions of 80s horror movies as a little kid. This show felt like I was in a room with some of my genre heroes and getting to overhear them talk about the movies I loved. I didn't learn anything new or too revolutionary but the show offers interesting points and perspectives from a wide range of talent and personalities. Also - you may want to have a notebook with you because there are some occasional obscure references and I want to find some of those flicks!

RLJE Films delivers Eli Roth's History of Horror to Blu-ray just in time for Season Two to start later in October. This three-disc set offers a solid A/V presentation along with some welcome bonus features. If you're a big genre fan, this is well worth checking out. Even if you know all the points they're talking about it's fun seeing the collection of stars and filmmakers that were interviewed for this series. Recommended.