James Cameron's Story of Science Fiction allows the "king of the world" to interview his contemporaries one-on-one exploring the themes and sub-genres science fiction - often with a childlike vigor. Steven Spielberg, Christopher Nolan, Jonathan Nolan, Will Smith, Ridley Scott, Arnold Schwarzenegger, and Guillermo del Toro among other sci-fi scholars and writers drop by to add their two cents. It's a fun show for sure - but it preaches to the choir. If you're a genre fan you're already ahead of the game here. If you're new to sci-fi this is great - but - spoilers abound! RLJE brings this series to Blu-ray with terrific visuals, respectable audio, and some additional interview clips to round out the show. If you're a fan, it's certainly Worth A Look.

As a science fiction fan who grew up watching all of the classics as a kid - I love a good sci-fi documentary. James Cameron's Story of Science Fiction - which must have been made between breaks restoring True Lies and The Abyss - cuts a large swath of material from a huge canvas by bringing in such contemporaries as Ridley Scott, Steven Spielberg, George Lucas, among numerous other famous and not so famous faces. Split into six one-hour episodes, the topics of conversation are Alien Life, Space Exploration, Monsters, Dark Futures, Intelligent Machines, and Time Travel. 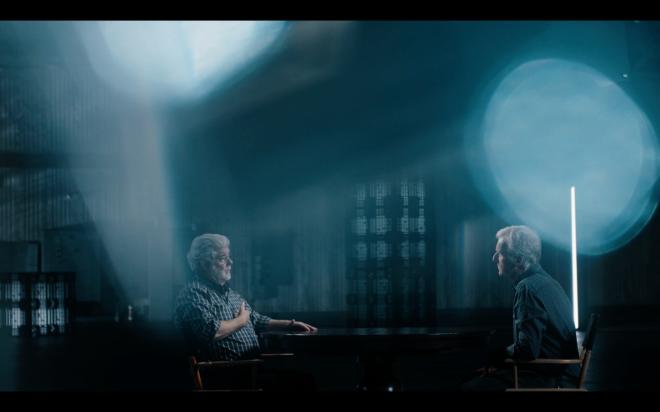 As each topic of conversation comes up we're given an assortment of various relevant faces from famous films but also relevant to an aspect of the sub-genre. Take Alien Life as an example. Spielberg gets a lot of one-on-one time with Cameron throughout the series, but here especially because of Close Encounters of the Third Kind and War of the Worlds. He gets to chat about benevolent and evil aliens arriving on Earth. Similarly, we have Will Smith and Independence Day filmmakers chime in with their moments about the film and their critters. Ridley Scott and Sigourney Weaver drop by for a chat about Alien and Aliens and the different thematic elements of those films. And the rest of the series progresses in that same way.

Cameron through a one-on-one conversation with a specific filmmaker sets the topic, the person sitting across from him gets a moment to respond - or if it's Christopher Nolan not really say much at all - and then someone like Jane Espenson, Edward Neumeier, or Lisa Yaszek chime in to expand upon the idea presented. Again with something like Intelligent Machines we have the positive examples of Short Circuit or R2D2 but then we have the big granddaddy of all diabolical artificial intelligence HAL from 2001: A Space Odyssey. The show's structure is always engaging and never boring, and if you're already part and parcel to the goings-on of the topic - you don't really learn anything new here. But every once in a while you get a neat little nugget that lets you look at a favorite film in a different light. There's also some humor peppered throughout so it's not an entirely serious affair. Schwarzenegger gets the best laugh of the show when he and Cameron are discussing Time Travel and Arnold chimes in the first thing he'd do if he could go back in time - it's not the answer you might expect!

Because this series hits on the basics, there's not a lot of room for depth to any given conversation. Truthfully, if this series really wanted to go deep they easily could have dedicated two or three episodes to any given topic. Because they're given such little time to work with, each episode really only highlights the most famous of famous examples - often filled with spoilers. If you haven't seen Looper yet - don't watch Time Travel because, yeah, it's spoiled almost immediately. Another slightly irksome habit of the show is the tendency to highlight more personal examples as pinnacles over others. So when we take a look at Dark Futures we don't really explore something like Soylent Green beyond that iconic final line. Instead, we get a lot of time dedicated to The Walking Dead - because this documentary series was produced by AMC. They needed to point to their own masterwork.

Likewise, James Cameron is guilty of the same issue. For Alien Life a good chunk of time is dedicated to Avatar with various cast members getting to chime in about how important the film was showcasing empathy for other species. I mean I enjoy the hell out of Avatar - but I wouldn't highlight it as a pinnacle example. The same happens for Intelligent Machines and Time Travel where The Terminator and Terminator 2: Judgement Day are highlighted above all others. This self-serving isn't horrible as these films really only get just a few moments to strut, but the preferential treatment is impossible to miss. Thankfully the show spends much more time with genre-definers like Ridley Scott, Steven Spielberg, and George Lucas and their relevant contributions.

As I said before, James Cameron's Story of Science Fiction doesn't buck the house. It highlights famous materials because it's playing to the average man and woman out there who haven't seen much else. They drop some fun nuggets from less famous films like Primer - but those are relatively few and far between. I took a Science Fiction appreciation class in college where this sort of documentary would have fit in during the first week of class nicely. It's an introduction to the genre and the themes it plays with, but depth isn't its strong suit. Certainly entertaining and worth a watch, it's just not earth-shattering in the same way a giant meteor striking the planet would be.

RLJE delivers James Cameron's Story of Science Fiction to Blu-ray in a two-disc set. Housed in a two-disc keep case with identical slipcover, each disc is home to three episodes. The disc loads to an animated main menu with traditional navigation options.

As a whole, James Cameron's Story of Science Fiction offers a solid 1.78:1 1080p transfer that offers clean and clear, detailed visuals of the various in-person personalities appearing on the screen. The visual design looks more like a spacey warehouse with bright white lights in and around the frame to give it a cool futuristic vibe. The interviews look cool and stylish - but the film heavily relies on clips and footage of the films that it's discussing - and that could be the rub for a lot of fans.

Virtually every film mentioned and presented throughout the series has been cropped to match the 1.78:1 frame. So if you have something like 2001 or even Cameron's own Terminator 2 - the image has been zoomed in. But even older films and television series that originally appeared in 1.33:1 are now cropped off to fit the frame. Granted this was done in such a way as to be respectful to the scene - Data's trial in the classic Star Trek: The Next Generation episode The Measure of a Man is cropped to fit but it's done respectfully without a lazy hand. The clips in question move by so quickly it's hard to get too worked up about.

The other quibble is the source of some of these clips. Sometimes the film being showcased uses clips from new masters and looks great - other times it's painfully obvious they're being run from older DVD masters complete with speckling and edge enhancement not seen in recent restorations of said film. Back to the Future is one such case.

While a DTS-HD MA 2.0 mix may seem like a bit of a drawback - it's really not. Even with clips from famous movies on screen, this is largely a talking head show without the need for a dramatic soundscape. Outside of a few key examples, rarely is the audio of a specific film necessary to the show. Usually Cameron or one of his contemporaries is talking over the scene making their point of what they're talking about. As such music most plays to the background to give a little audio intensity so that it's not just a voice with nothing else to the mix. There's really not a whole lot to say here. A 2.0 mix works for this film. A surround mix would have been cool but a stereo track gets the job done.

Bonus features aren't heavy here. The only feature is outtake clips from a few of the interviews. That's where I wish this series had been longer so these interviews had more time to stretch out. Even with these extra clips, it's easy to see that there was a lot of footage that didn't make it to the final product or these small clips here. How can you not have hours of material when you have Cameron looking across a table from Steven Spielberg or Ridley Scott?

James Cameron's Story of Science Fiction is an interesting and engrossing six-episode documentary about the genre - but it's hardly a defining moment either. Playing better as a college 101 class covering the basics, it's an interesting series and fun to see various Hollywood heavyweights and genre authors discuss the genre and themes of the specific episodes. I didn't come away feeling like I learned something new or had a new light turned on in my head, but, I still had a fun time digging through it. The show could have easily done whole seasons out of each topic - and considering the talent brought in to add a few soundbites - I wish they'd gone that route to give these voices more time.

RLJE delivers a respectable Blu-ray release with great video transfers for each episode and solid audio tracks. Bonus features are light but it's nice to see the extra interviews - again I just wish there was more. If you love science fiction it's a fun watch but you might not get anything new out of it. If you're new to the genre, this is a worthwhile overview but again be warned extreme spoilers abound so if you haven't seen some of the classics, you're likely to have them ruined for you in some capacity. Worth A Look.