Things go bump in the night and the printed page with Shudder and AMC's new Creepshow - continuing the ode to classic E.C. comic books. Featuring the talents of Tom Savini, Greg Nicotero, Joe Hill - each episode provides some creepy and often humorous ghoulish tales. Like the first and second films, they may not all be winners, but there's fun entertainment value to be enjoyed by genre fans. RLJ Entertainment delivers Creepshow Season One to Blu-ray in an excellent three-disc set sporting terrific A/V presentations and some fun bonus features. Recommended.

Ghoulish monsters, murderous demons, some werewolf soldiers, a demonic dollhouse and other crawling creatures populate the short stories of Creepshow Season One. Brought to life by genre veterans young and old - this is the best Creepshow has been since the George Romero / Stephen King original Creepshow and the worthwhile followup Creepshow II. The lest said about Creepshow III the better, try as I might somehow I'm reminded that movie exists. The original movie was a great throwback to the old E.C. comics like Tales From The Crypt or Vault of Horror. As a kid growing up I could read and watch just about anything and everything I wanted - but for some reason, horror comics weren't allowed. It was like that for a lot of kids I imagine. So I had to sneak them when I could. Creepshow was a terrific throwback to those gory stories with a dark sense of humor. 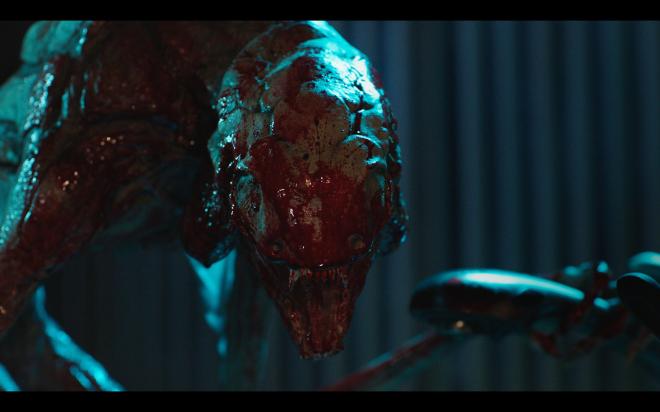 Creepshow the series thankfully works well. Keeping to an hour-long format, each episode consists of two short stories unrelated to one another - similar to the comics. Sometimes the stories are genuinely scary. Sometimes they're simply creepy. Sometimes they're genuinely funny as hell. Other times they're not that great. Just like the comics. Not every story is a winner, but even when it's at its lowest, the show's still entertaining. With each story being a little over 20 odd some minutes long, they don't last long enough to get worked up over it they're not that great. You can simply move onto the next.

Produced by Greg Nicotero, this show is chockfull of cameos and homages to horror - all brought to life with some great practical creature effects and gore. With KNB doing the effects work, you get some gnarly creatures and blood and guts packed into each episode. To cap it off, there are cameo appearances from the likes of Adrian Barbeau, Dan Gould, DJ Qualls, David Arquette, Tobin Bell, Giancarlo Esposito among numerous other familiar faces. Jeffrey Combs throwing a thick German accent as a Nazi in WWII is a hoot. Each episode rolls in, you catch a few familiar faces, get a creepy little monster or creature, and it rolls out. 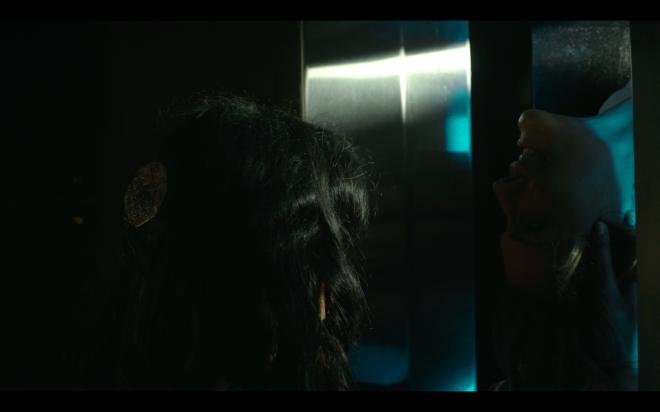 It's all so simple and easy going and it's just fun. Could it be a better show, sure - there are a few clunkers here and there - but overall I enjoyed it. As a kid that grew up sneaking horror comics into my monthly pull box at my local comic shop, Creepshow gave me the nostalgia feels. With an absence of quality horror television - let alone anthology horror television - Creepshow is a welcome return. I went in for fun and entertaining, and I got what I wanted out of it. As I said, not every story is a winner, but with 12 stories spread over six episodes, you get some worthwhile entertainment. Rather than getting another movie that's nearly unwatchable, I'm glad AMC and Shudder took Creepshow in this direction. Here's hoping Season 2 is just as good - if not better.

Creepshow Season One finds itself on Blu-ray thanks to RLJ Entertainment, AMC, and Shudder. Pressed onto three Region A BD-50 discs, the discs are housed in a sturdy three-disc case with each disc getting their own tray. The case is housed in a cardboard slipcover that glows in the dark, the case also features reversible artwork. The disc loads to an animated main menu with traditional navigation options.

Every episode of Creepshow arrives with a solid 1.78:1 1080p transfer. As with the comics before them, there's lots of color in this show and depending on the story in question, they can be heightened or subdued or pushed to a monochromatic tone altogether. So don't expect a uniformly consistent experience - but a great looking one just the same. The first story Grey Matter is pretty nearly all black with deep inky blacks and strong shadows - often only a flashlight to light the scene. Thankfully when it's at its darkest the episode never reaches crush. Details throughout are strong and clear allowing you to appreciate facial features, costuming, and the intricate production design. It's a great looking show - well produced and everything comes through with these impressive transfers.

Every episode of Creepshow also enjoys a strong DTS-HD MA 5.1 surround track that is some creepy effective atmospheric material. Each story finds a fun and unique way to use the soundscape. Gray Matter lets the creaky stairs of an old house combined with the wind of a raging storm set the scene. The Finger uses some smartly placed scuttling sounds to open up the scene. The slippery slithering sounds of Skincrawlers is extra squishy and enjoyable. Each episode has clear dialog and some welcome music accompaniment from composers Tyler Bates, Tim Williams, and Christopher Drake. Levels are on point without issues.

Creepshow enjoys a pretty fun set of bonus features. You get story-specific audio commentaries for the episodes - Episode 5 actually has two commentaries! - which is really cool because there were a number of creative teams involved to bring each story to life so they're worth listening to hear how they pull off certain gags, as well as executing a big-screen look on a very small budget. Greg Nicotero offers up a lot of info within the commentaries, but the big Creepshow Resurrected documentary is the big win for fans as to how the show came together and the talent that came together for this movie. Nicotero's discussions about working with Savini again were particularly cool as a way to thank his mentor.

Like the original two films, Creepshow Season One is just good fun. Sometimes it's creepy and scary, others it's just good-humored and entertaining. The show's a nice return to horror anthology storytelling. There may not be a cackling ghoul to introduce each episode and make wisecracks, but it doesn't need one to be a tribute to the comics that inspired it and the original movies. It may not be perfect, some stories are a bit clunky, but I had a lot more fun with this one than I thought I would have!

RLJ Entertainment delivers Creepshow Season One to Blu-ray in good order, each episode earning solid A/V presentations and some informative bonus features. You don't have to love the original movies to enjoy this one. If you love horror with a little mix of comedy tossed in, you've got six episodes of worthwhile entertainment. Recommended.