Clint Eastwood moved from superstar actor to superstar actor/director with 1971's Play Misty For Me - a stellar entry in the psycho-sexual thriller genre and a damned impressive first feature for the new director. In a form that would define his career behind the camera, Eastwood keeps the film small and intimate never losing pace or scale of his little drama about a radio DJ and his disturbed Number One fan. After a rough first outing on Blu-ray, Kino Lorber Studio Classics delivers the release fans have been looking for with a fresh scan, great audio, and a host of great bonus features. If you're an Eastwood fan, your collection isn't complete without Play Misty For Me - Highly Recommended.

Dave Garver (Clint Eastwood) is a disc jockey on the rise with a popular late-night show mixing smooth tunes with poetry. One fan calls in every night with the simple request - "Play Misty for me…" for which he obliges. One night after the show he meets his number one fan - Evelyn (Jessica Walter). Dave's hung-up on an old girlfriend but as a bachelor, he's not above playing the field. What he thought was a simple one-night outing with a fan turns deadly serious as Evelyn refuses to disappear from his life. 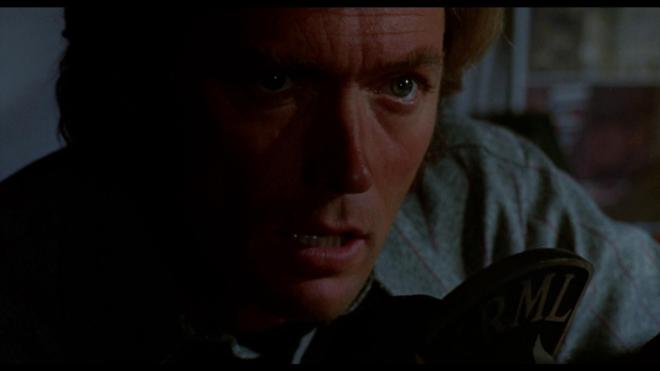 I always knew of the similarities between Play Misty for Me and Fatal Attraction. They're effectively the same story just with very different approaches. But now having reviewed both films within such proximity of their releases, fluffy bunny rabbits aside - I have to tip my hat to Eastwood's efforts as the better of the two. For starters, Dave Garver is actually a likable guy. Sure, a bit of a schmuck at times, but you can't fault the guy for being honest. Before anything happens he tells Evelyn flat out he's hung-up on another woman and whatever he's about to have with her is a one-off. In comparison, Michael Douglas comes off as a bit of a prick who deserved a far worse fate than the shocking finale of that 1987 thriller. This isn't to expunge Eastwood's Garver of responsibility, it's a simple measure of character. He's still a bit of a sleazeball but he was at least an honest sleazeball!

First-time directorial efforts are a bit of a fascination for me - especially if that director is more famous as an actor. Actors moving behind the camera is nothing new, it's just how well they handle the workload that is of interest to me. Some pull it off with grand success - Ben Affleck with Gone Baby Gone, Kevin Costner with Dances With Wolves, and for a classic film example Paul Henreid with For Men Only. Others can fall flat on their ass. Even though it's considered a classic today Charles Laughton's one and only directorial effort Night of the Hunter was a famous flop. I point these examples out because it's anyone's guess how an actor is going to transition to the work. As an incredible catalog of features tells us, Eastwood took to it like a fish to water.

Play Misty For Me has all of the hallmarks of Eastwood's signature style behind the camera. A small-scale intimate film that delivers big-scale thrills and chills. It's not flashy, it's not showy, but it's efficient and effective storytelling. While he may headline the film, Eastwood isn't the force driving the film. Jessica Walter easily overshadows everyone in the film. How she deftly pivots from charming and lovable to wounded and hurt to full-out rage-fueled madness makes this film the essential thriller that it is. In true Femme Fatale fashion, her Evelyn is an easy presence to fall for, but one you'll soon regret. For good reason, Walter earned a Golden Globe nomination for her efforts. Again, Eastwood is the headline star and director, but it's her movie and she controls every scene she's in. It's actually funny to see her in this knowing her time on Arrested Development and how her natural comedic charms were put to good use as a psychopath.

Play Misty For Me is a movie I like to pull out for the Halloween season as an alternate for most of my scary movie watching. It's pegged as a Thriller, but it holds onto a number of Horror elements with a crazed unhinged individual becoming an increasingly lethal threat. I love how Eastwood paced this movie. It's all about the suspense and building that tension while giving the audience subtle release to believe everything is "safe" until it isn't. It's a hell of a show with one terrifying final act. Eastwood picked the perfect project to slip behind the camera for. All of his hallmarks as a director are on display and you can see how now he's into his 90s he's still making movies.

Kino Lorber Studio Classics gives Play Misty For Me another spin on Blu-ray in a single-disc release. Pressed on a Region A BD-50 disc, the disc is housed in a standard sturdy case with identical o-card artwork with reversible insert artwork depicting alternate poster art that isn't nearly as iconic. The disc loads to a standard static image main menu with traditional navigation options.

If ever there was a movie I would have joyfully gone in for a full 4K UHD Blu-ray release - Play Misty For Me would be it. That said after Universal's 2015 transfer, I am very happy with this new 1080p transfer sourced from a new 2K master. All of that frustrating frame jitter - gone. Unsightly haloing and edge enhancement - gone. The film grain is natural and organic without the overly noisy appearance as before. Now we have a detailed, colorful image with a terrific film-like presentation. 1970s primaries have terrific pop - the scenic locations throughout the film are gorgeous, but the music festival offers up some impressive color highlights. Black levels are also much stronger giving a welcome sense of depth to the image that was sorely missing with the Universal release. Source elements are in pretty great shape, there's some occasional speckling here and there, but overall this is a problem-free image. Again, 4K would have been great, but this new transfer is no slouch making this an easy replacement over the old disc. That thing's a coaster now.

Play Misty For Me arrives with what sounds like the exact same DTS-HD MA 2.0 mono track - which is perfectly fine as this was always a great sounding mix to my ears. Clean dialog, no problematic hiss or pops. It's moody and effective from the first time we see Clint standing on the porch overlooking the cliffs with the waves crashing around him to the Erroll Garner title song "Misty" to the terrific score by Dee Barton. Even as a mono track the mix has a naturally atmospheric quality to it. Much of the film takes place in small rooms like Dave's radio station or his home, but big scenes like the Jazz Festival sequence open up nicely. Screams also offer some welcome punch to get you jumping.

Kino Lorber Studio Classics delivers something old and something new with this bonus features package. The Tim Lucas audio commentary is a welcome addition as he offers up some nice anecdotal tidbits to chew on. Donna Mills slides in with an interesting little interview. Sadly due to COVID restrictions, this is a Zoom interview, but she still has a lot of fun info. From there we have Howard S. Berger video essay is a nice tribute to the film and Eastwood's work. On top of all that, we get a full load of archival bonus features that were available on the previous Blu-ray and the 2001 DVD.

Eastwood fans have a lot to celebrate with Kino Lorber Studio Classics' new release of Play Misty For Me. Clint's first outing as a Director highlights his sure hand behind the camera and the career that would follow for the next 50 years. This is a terrifying thriller that holds up to this day, no matter how many times I see it there are still moments that make me jump. Eastwood is his calm cool self, but it's Jessica Walter's show and she's amazing in this film. Kino Lorber Studio Classics brings Play Misty For Me back to Blu-ray with a fresh new transfer, great audio, and some excellent new and archival bonus features. You don't need to be an Eastwood fan to love this is one, it's just a great flick. Highly Recommended.