No stranger to starring in westerns, Clint Eastwood graduated to directing the genre that made him famous with High Plains Drifter. A brilliant anti-hero western that borders on being a ghost story, Eastwood brings his steely-eyed gaze and pitch-perfect pacing to deliver one his best - and darkest - westerns. Kino Lorber Studio Classics brings High Plains Drifter back to Blu-ray with a new disc that offers the same great video transfer, improves the audio, and offers a fine assortment of bonus features. If you're a die-hard fan or haven't added this to the collection - it's time. Highly Recommended

"Flee-bitten range bums, don't usually stop in Lago. Life here's a little too quick for 'em. Maybe you think you're fast enough to keep up with us eh?"

"A lot faster than you'll ever live to be."

The Stranger (Clint Eastwood) rode into Lago out of the shimmering heatwaves. Within the first few minutes of his arrival, three of the local dregs were dead and a woman raped. Normally most men would be locked in irons or strung up by the law, but the locals in Lago have a bigger problem. Outlaws Stacy Bridges (Geoffrey Lewis), and brothers Dan (Dan Vadis) and Cole Carlin (Anthony James) are about to get out of prison and return to their "home town." Years before the three men whipped a U.S. Marshal to death - and now the citizens of Lago need the Stranger's help to defend them. Instead of running and hiding, he suggests they give the men a warm welcome and paint the town red. 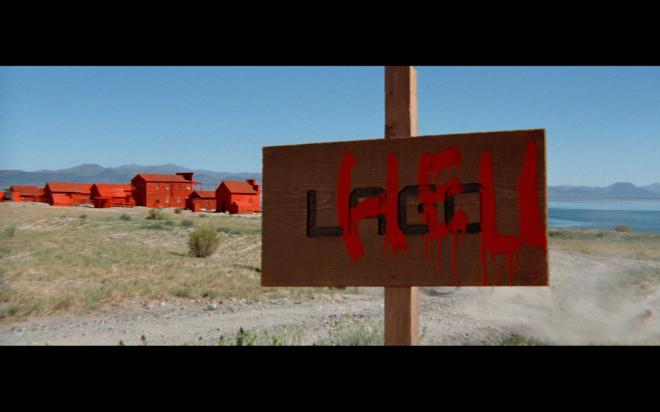 Growing up in an Eastwood house, I got to see The Man With No Name Trilogy at a pretty young age. If it wasn't one of those, it was The Outlaw Josey Wales. If it wasn't that, it was Pale Rider. But it was a long time before my dad bought High Plains Drifter from Columbia House. When that tape came in I was really excited because the way the description read it made it sound Eastwood had directed a fourth Man With No Name movie himself! Sure, his character doesn't officially have a name in this film, but he certainly isn't Joe, Maco, or Blondie. He's something else altogether and a hell of a lot more sinister.

Of all of Eastwood's westerns, High Plains Drifter has always been the most unsettling. From the opening Dee Barton score as the Stranger slowly fades into the shimmering heatwaves, to the first murders, to the final confrontation with Geoffrey Lewis' Bridges - it's a creepy film. The flashbacks to the murder of the Marshal as the town looks on is intense and disturbing with an entire town looking on. With the Stranger's own humanity in question, I've settled into the idea that this movie is actually more of a ghost story than a traditional western. The Stranger is always 10-steps ahead, moving about with ease undetected. He rides in out of the heat and then disappears from whence he came. Whether he's the spirit of the murdered U.S. Marshal or an angel of death, he's going to make the town of Lago pay for their crimes - by fire or blood. Every horrible thing he does is forgiven by these people because they are all willing to sell their souls to suit their own needs.

I also have to tip my hat to Eastwood in this film for paying true tribute to his mentors. On the various gravestones read the names Don Siegel, Sergio Leone, and Brian G. Hutton. When High Plains Drifter was originally released one of the criticisms was that Eastwood borrowed too heavily from these men's styles. Today it's a fitting tribute as his horse rides between the markers. As only his second feature as a director, Eastwood wasn't yet the filmmaker he's known for today - now into his 90s, he's set to direct and star in another film due out next year. In 1973, he was just another actor who thought he could direct, and a lot of critics - despite this film's successes - dismissed his early efforts. Time and numerous efforts behind the camera, the Rawhide actor established a cinematic legacy.

High Plains Drifter is a favorite, but it's not one I pull out frequently. It's too good a movie to watch numerous times, it feels like you have to pick the right time to watch it. It's a moody atmospheric film and despite the location, it plays well in the fall. While not strictly a horror movie or really anything close to it, I've found myself over the last few years pulling this movie out in late September or October. Going back to my previous statements, it's the right kind of creepy and unsettling western to watch when the leaves start to turn and there's a bite in the air. Give it a try as an alternative to your annual horror movie marathon, you might be surprised at how well it fits.

Kino Lorber Studio Classics delivers High Plains Drifter to Blu-ray for the second time in a new single-disc release. Pressed on a Region A BD-50 disc, the disc is housed in a standard case with identical slipcover art and reversible insert artwork. The disc loads to a static image main menu with traditional navigation options.

Since it was already a pretty damn great transfer to start, it appears that KLSC has repurposed the same transfer from the previous 2013 release. Again, I have no problems with that since it is a great looking disc. The details in clothing, facial features, and the intricate production design to the full three-dimensional sets constructed to create Lago look terrific. Film grain is intact and gives the image a nice film-like quality to the presentation. Colors are bold with plenty of pop - especially reds. Black levels are strong with the desired inky presence while giving the image a terrific sense of depth and dimension. Free of any compression issues or age-related troubles, this is still a great transfer for this film. Sure, I would have loved a full 4K UHD Blu-ray, but I won't complain about what we have here.

KLSC brings the same decent if slightly over-processed DTS-HD MA 5.1 mix to this disc, but also includes a much more natural and satisfying DTS-HD MA 2.0 mix to the disc. I never really had any issue with the 5.1 mix beyond it being unnecessary. The rears and sides were hardly used any way that it felt like a 2.0 mix with the Front/Center channels managing the workload anyway. This time around the balance of the mix feels more accurate for the 2.0 mix. It's less tinny and without sounding quite so airy and spaced out. Even though there's a great sense of atmosphere and imaging, the mix feels tighter. Scoring is on point, that Dee Barton's score always creeps me out. Hiss is never an issue as both tracks are clean.

The big win for this release is the bonus features - namely because there are actual bonus features on this disc! Filmmaker Alex Cox provides an interesting audio commentary that's worth picking through. The new interviews with actors Mitchell Ryan, William O'Connell, and actress Marianna Hill are a bit more interesting. They may not be long but each participant has an interesting story to tell. Mitchell Ryan's interview was conducted video conference due to COVID restrictions, but it's good material. Marianna Hill has great insights into her character while William O'Connell who starred in several of Eastwood's movies has a lot of great stories and is very humorous.

I always have a hard time ranking Eastwood's westerns. There's always a moment where I say "but what about…" and the whole list is shot. I don't exactly know where I'd place High Plains Drifter but it would be high on the list somewhere. A Creepy favorite, the film is unlike any of Eastwood's westerns. I like the idea that it's actually more of a ghost story than anything and it's become a fall viewing favorite. Kino Lorber Studio Classics delivers another release of this film on Blu-ray with great results. The video transfer has always looked good, but the inclusion of a 2.0 mix is a treat and fits the film better than the previous surround mix. On top of that, you get a bunch of interesting bonus features to pick through. If you already owned the 2013 set, you may not feel the need to jump to this release, but if you're a die-hard fan - or - if you need this in the collection, purchase with confidence, it's a great movie and solid disc. Highly Recommended.