Dennis Quaid, Bess Armstrong, Simon MacCorkindale and Academy Award winner Louis Gossett Jr. star in the most terrifying Jaws adventure ever. Everyone at Florida's Sea World is thrilled with the new "Undersea Kingdom", a maze of underwater plexiglass tunnels that permits visitors to get closer to marine life than ever before. The opening ceremonies include many important guests...and one uninvited baby shark who accidentally enters the park's lagoon through a faulty sea gate and subsequently dies. The young shark's 35-foot mother soon follows her offspring, creating the most horrifying tale of terror ever filmed in the water. Directed by original Jaws designer, Joe Alves, written by Richard Matheson and Carl Gottlieb and filled with heart-pounding special effects, this Jaws will have you screaming for your life.

Just goes to show exactly how noteworthy 'Jaws 3' truly is when the best thing I remember of it is a water skiing pyramid being chased by a great white shark. My memory of the second sequel is really more like fragments of assorted scenes. Most of them are of water skiers performing various feats while SeaWorld patrons watch in stunned horror at the sight of a shark's fin skimming the waters behind them. An unknown man — well, unknown at the time — hysterically yells and helps the performers out the water while also too scared to jump in and pull them out himself. The scene has been unforgettable all these years partly because it was released the same summer I visited SeaWorld in San Diego with friends, so there's that creepy coincidence factor. But also, and arguably more important, because it's sadly the production's only genuinely suspenseful moment. The rest of the movie is mostly spent on a rather irritating cat and mouse game with a ginormous shark trapped inside an artificial lagoon while park investors bicker of the financial benefits of exploiting the obvious bloodbath waiting to happen.

Understood from that point of view, perhaps it's not surprising I've all but forgotten much of this third entry in the franchise. For one thing, I completely forgot Dennis Quaid is even in the movie — he's the aforementioned unknown man assisting performers out the water. Quaid stars as Mike Brody, the older son of the original film's Sheriff Brody, working as the park manager. Or so, we're lead to assume he's the manager since no one outright describes why he spends much of the time running around the park doling out orders, but later, largely ignored when attempting to control the asinine decision-making of those around him, much like his father. In either case, he, at least, is deserving of a raise or promotion for saving the park and the lives of several paying customers. One such act of heroism sees Mike repairing damaged equipment in the glass-covered underwater tunnels attraction while the giant fish beasty slowly creeps out the watery darkness. In due course, Mike, and by extension Mr. Quaid, proves he is of the leading-man hero breed by hilariously bringing an end to the terror in similar fashion as his father. 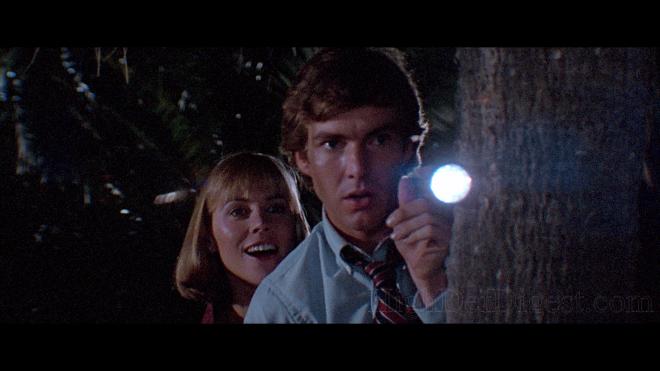 Speaking of which, this brings up one small troubling issue behind a plot that took three writers to complete, one of which happens to shockingly be the legendary author Richard Matheson. The Brody family seems to have some of the worst imaginable luck with fish and large bodies of open water. You'd think after two terrifying experiences, they would avoid water for the rest of their lives. Younger brother Sean (John Putch) has the right idea by deliberately studying in Colorado, especially after fighting for his life in the previous installment, which has developed into a fear of the ocean like his father. Visiting his brother and just when he's striking a romance with a very young and cute Lea Thompson, he's once again assaulted by a shark at SeaWorld of all places! Meanwhile, Quaid's Mike battles the powers that be, from Louis Gossett, Jr who cares more about his career as the designer of the underwater attraction and a pair of daredeviling oceanographer filmmakers (Simon MacCorkindale and P. H. Moriarty). Also standing against him but later supportive is Mike's marine biologist girlfriend Kay (Bess Armstrong).

Rather than risking the franchise with an entirely fresh and original idea, the filmmakers simply chuck the same old chum at audiences. It's not an exact copy, but 'Jaws 3' essentially follows a similar blueprint as the two previous films. Notwithstanding, I admit being slightly amused learning how Mike and Sean have grown into adulthood after two encounters with a great white, but the plot frankly treads on shallows waters, failing to recapture much of the charm, thrills and suspense of its predecessors. Instead, the movie arrives on shore with an unintentional air of comedic badness, starting with the inadvertently funny explanation of how the wide-mouthed monster accidentally swims into the artificial lagoon. The shark that was, at first, believed to be the ferocious killer is actually the baby, and the big, angry momma followed behind it! Alternatively known as 'Jaws 3-D,' the producers capitalized on the suddenly revived but very brief interest in 3D movies at the time. And thanks to some decently strong camerawork by director Joe Alves, the added third dimension is the movie's saving grace and is ultimately the best way to watch it.

Universal Studios Home Entertainment brings 'Jaws 3' to Blu-ray on a Region Free, BD50 disc that sits comfortably inside a standard blue case. At startup, viewers are taken straight to a menu screen with the usual options, a static picture of the cover art and music playing in the background. To access the 3D version of the movie, users must enter the "Extras" option.

The second sequel in the series jumps the shark, so to speak, with a good-looking AVC MPEG-4 encode and a bit more satisfying MVC-encoded counterpart. Admittedly, the source hasn't aged particularly well, falling on the softer side of things for a good chunk of the runtime. But much of this can be chalked up to the photography at the time and the special cameras that were used during the production.

Nevertheless, it seems as though Universal made the effort in cleaning up those elements and possibly struck a new master, especially in the case for the 3D presentation. On the whole, the video is nicely detailed with clean definition in and around the water park while fine lines in clothing and surrounding foliage are distinct, and the faces of the cast are often revealing. A few sequences look worse than others and are quite blurry, in fact, but much of this is easily forgiven as the result of various optical effects and composite shots, which are made all the more apparent in high-definition. And there are instances of obvious halos caused by the use of edge enhancement in a couple sequences, bringing the quality down some. But at least, it's not a continuously glaring problem throughout.

The rest of the 2.40:1 image displays comfortably bright contrast and excellent black levels. The movie seems as though it's gained another life on Blu-ray, looking refreshed and rejuvenated. Background information is discernible in the distance, making the smallest object in the water park plainly visible and allowing viewers to appreciate some of the early 80s kitsch of SeaWorld Orlando. Primaries benefit the most from the jump to HD, animating the entire screen with vivid blue skies, lush green grass and trees, and succulents reds in the clothing and the buckets of blood. The video is also awash with a very thick layer of film grain that occasionally looks a bit like mosquito noise but is actually the result of the 3D processing and the film stock. For some, this will be quite unappealing, perhaps even distracting, but for others, it simply provides the image with an appreciable cinema-like quality.

As for the 3D version, which is treated as an added bonus rather the film proper, things shift slightly more positive because there are obviously different aspects taken into consideration. The movie was originally shot in the relatively new at the time Arrivision 3D system, which simply equipped standard 35mm 2-perf cameras with special twin lens adapters. The technique separated an image into the upper and lower portions of the frame, a process known as "over/under," and it didn't require any special projectors during playback, aside from another fitted lens to combine the image, creating a true polarized 3D picture.

So with that in mind, the transition to 3D Blu-ray is fantastic with several awesome immersive moments throughout. Parallax, at first, feels a bit exaggerated and may require a bit of getting use to at first, but separation between various items is flawless, creating the sort of layered effect that also feels natural. With lots of depth and dimensionality, objects in the far distance penetrate deep into the screen, making large open spaces, especially when walking about the park, feel incredibly spacious and expansive. The underwater scenes are arguably the best demo-worthy moments with fish appearing as though independently swimming across the screen. As would be expected, the film comes with several gimmick shots, such as the opening credits sequence with the main title jumping at the faces of viewers and the now infamous climatic scene with the shark attacking the control room. They protrude from the screen with amusing effectiveness, sometimes comically threatening audiences with the sharp points of needles, but at the same time, those moments can also feel a tad straining on the eyes. But aside from that, this is the way to watch 'Jaws 3.'

The horror thriller is also nicely equipped with a very satisfying DTS-HD Master Audio stereo soundtrack. While not as wholly immersive as the 3D video, the lossless mix nonetheless gets the job done with various thrills and chills. Much of the activity takes place in the center of the screen, but the design still delivers a wide and spacious soundstage that's quite engaging.

Off-screen effects convincingly travel across the screen, generating a great sense of space during the underwater segments. The track lends itself nicely to the receiver's upmixing function, as a few subtle atmospherics lightly bleed into the side speakers and the front-height channels. Alan Parker's score is evenly spread between the three channels, delivering lots of warmth and excellent fidelity during the loudest action scenes. The mid-range isn't particularly impressive, but it's dynamic and clean with great extension into the upper frequencies. Low bass is accurate with a couple amusing palpable moments that provide the music and certain sequences with appreciable weight and presence. With distinct, intelligible vocals in the center, the high-rez track is a notable improvement over previous home video editions.

Just when you thought it was safe to go back into the water, 'Jaws 3' attacks moviegoers with a new dimension of terror and cheesy badness. However corny and absurd as it is though, the third installment in the franchise does have its silly charm when viewed as the daffy popcorn entertainment it actually is. The Blu-ray arrives with an excellent audio and video presentation, though the elements admittedly haven't aged all that well. Interestingly, the 3D version of the film, which is how it was originally shot and meant to be shown, is treated as the one lone bonus feature, making the overall package attractive only to the most devoted fan, cult collectors and 3D enthusiasts.

Sale Price 8.99
List Price 14.98
Buy Now
3rd Party 8.98
In Stock.
See what people are saying about this story or others
See Comments in Forum
Previous Next
Pre-Orders
Tomorrow's latest releases