The horror is far from over as Roy Scheider, Lorraine Gary and Murray Hamilton reprise their iconic roles in Jaws 2. Four years after the great white shark terrorized the small resort of Amity, unsuspecting vacationers begin disappearing in an all-too-familiar fashion. Police Chief Brody (Scheider) finds himself in a race against time when a new shark attacks ten sailboats manned by teenagers, including his own two sons. The same heart-stopping suspense and gripping adventure that enthralled movie audiences throughout the world in Jaws returns in this worthy sequel to the original motion picture classic.

Picking up four years after Steven Spielberg's seminal classic, 'Jaws 2' is a bit of a mixed bag, composed of its predecessor's best aspects while throwing in a few new elements that frankly drag about like a piece of driftwood on calm waters. It's a fact that seems reflected in the addition of new characters joining the island. They complicate matters and further the plot as scripted and on cue, particularly in the case of local land developer Len Peterson (Joseph Mascolo). To be fair, the sequel manages to be a decent follow-up, especially in light of the two later entries that ultimately sank the franchise. French filmmaker Jeannot Szwarc took over directing duties, and given the behind the scenes drama in the troubled production, Mr. Szwarc commands the few action set pieces like a seasoned captain. He steers his audience to a foreseeable yet amusingly satisfying conclusion that makes the nearly two-hour runtime cruise right by, making those rougher waters seem like a distant memory.

Coming off the box-office bomb and now cult thriller 'Sorcerer,' Roy Schneider returns as the intrepid but seemingly worrywart Sheriff Brody. His presence is easily one of the production's best aspects as he is once again faced with a possible great white shark roaming the Amity Island coastline. His fears appear justified when the mangled body of a killer whale is beached and a pair of boating accidents don't leave any trace of the killed boaters. Schneider already delivered a memorable performance in the first movie, and it's pretty much the same here. Except, his aquaphobia is not as crippling as before although he still suffers anxieties from his experience with the "perfect engine, an eating machine" and miracle of evolution as it was described by Richard Dreyfuss's Hooper. Where the story starts hitting a snag, however, is when the evidence of another shark terrorizing the beaches starts piling up. On several occasions, Schneider appears to be swimming on comfortable waters, simply riding the same waves while again being accused of yelling shark and inciting public fear just as the town council is deciding on constructing a hotel resort. 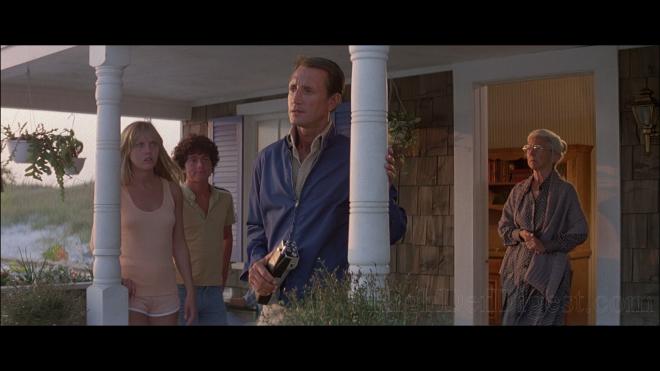 As would be expected in a production that sees a majority of the same personalities returning, the opposition to Brody's vehement warnings comes from the sleepy town's mayor Larry Vaughn (Murray Hamilton). And this is where more of the bad enters the picture, because audiences are essentially taken through the same motions as before. The mayor is more concerned with the monetary impact on local businesses than on public safety. That is until the danger hits too close for home in the third act. The only difference is that Vaughn now has more clout and reason to reject Brody's cautions with Peterson at his side. Greed trumps the well-being of consumers. However, it doesn't change the fact that these frequent exchanges, which eventually lead to Brody being replaced by Deputy Hendricks (Jeffrey Kramer), put a hamper on things and feel repetitious. Perhaps even more surprising is seeing Brody's wife (Lorraine Gary) also showing doubts of the obvious while still remaining the supportive spouse.

'Jaws 2' improves by the second half, with a more hurried pace as a group of rambunctious teens decide to spend the day sailing with the relentless shark trailing behind them. The group includes Brody's sons, Michael (Mark Gruner) and Sean (Marc Gilpin), which ups the ante and our reluctant hero's understandable need to bring an end to the water games. Granted, the last hour of the movie is inherently a retread of the same cat and mouse chase with Brody, Hooper and the sorely missing Quint aboard the Orca. But it's the film's highlight, and finally introduces a much needed dose of suspense, however mild it may be. It also gives viewers a better glimpse at a mechanical shark that's more realistic than its predecessor, sporting a gnarly burn scar from a previous encounter with a terrified boater. Fans of the franchise and those who grew up watching the sequel on VHS likely remember this portion of the movie and the shark's final demise, which again is reminiscent of Brody facing off with a deadly killer. In the end, the movie doesn't rise to the thrill levels as its predecessor, but it gladly rides on the waves of its success.

Universal Studios Home Entertainment brings 'Jaws 2' to Blu-ray on a Region Free, BD50 disc that sits comfortably inside a standard blue case. At startup, viewers are taken straight to a menu screen with the usual options, a static picture of the cover art and music playing in the background.

The great white puts a damper on summer break with an attractive 1080p/AVC MPEG-4 encode (2.35:1), showing strong definition and clarity throughout. Of course, a good chunk of the picture falls a bit on the softer side, much of it related to the original cinematography, but overall, the elements have aged very well.

Fine threading in the clothing and the sailcloth are nicely detailed, and faces are revealing during a majority of the runtime, especially during the many closeups. Flesh tones appear natural to the environment, showing many in the cast with a nice tan while revealing pores and wrinkles. Primaries are full-bodied and richly saturated, particularly the blue of the water and the reds in blood and 70s T-shirts. The softer secondary hues are equally bright and cleanly rendered, providing a good deal of warmth throughout. Blacks levels are true and accurate with only a couple less satisfying moments taking place during poorly-lit interiors, but shadow delineation remains strong throughout. With spot-on contrast and an ultra-fine layer of visible grain, the high-def transfer is a welcomed upgrade over its DVD counterpart.

Just when fans thought it was safe to revisit one of the most successful sequels of all time, Universal equips the movie with a very good and for the most part satisfying DTS-HD MA mono soundtrack. Granted, a good portion of the track comes in pretty flat without much or little extension into the upper ranges, and there is noticeable loud hissing during several moments. The few action set pieces lack a bit of room-penetrating energy and clean distinction, but the design overall is decently dynamic with much to appreciate nonetheless. And dialogue reproduction is strong and intelligible throughout.

The random noises of tourists on the beach, the residents roaming about the neighborhood and the sound of a ship's horn in the distance are continuously heard in the background, creating a very engaging and active soundscape. Although much of the lossless mix feels narrow and restricted to the center, John Williams' score expands the soundfield subtly while exhibiting excellent detailing and separation in the orchestration. And the low-end is mostly employed during the music, but it's nonetheless accurate and responsive for a nearly forty-year-old film, providing the movie with some appreciable presence.

Picking up four years after Steven Spielberg's 1975 seminal classic, 'Jaws 2' is a bit of a mixed bag, composed of its predecessor's best aspects while throwing in a couple new twist and turns that honestly somewhat drag. However, in light of the two sequels that soon followed, this is the better and more entertaining entry, which recaptures some of the charm and energy of the original. The Blu-ray arrives with an excellent picture quality that easily trumps previous home video editions, but the audio presentation reveals a couple minor issues likely related to the condition of the source. With the same set of supplements as its DVD counterpart, the overall package should satisfy longtime fans.