In the sleepy town of St. Mary Mead, nothing much happens. But when a major Hollywood production comes to town to shoot a period film on location - the town is abuzz. Former star Marina Rudd (Elizabeth Taylor) is set to make her big-screen comeback with her husband Jason (Rock Hudson) directing. The tabloids love that slick producer Martin Fenn (Tony Curtis) has brought along his lover and Marina's screen rival Lola (Kim Novak) to co-star for some extra on-set drama and free publicity. But when the village throws a party for the Hollywood elite, a simple local girl ends up poisoned - with the intended drink for Marina! When Scotland Yard Inspector Craddock is assigned to the case, he's thankful his aunt and fellow sleuth Miss Jane Marple (Angela Lansbury) lives in town. Together the family duo will piece together the clues and suss out who killed the poor girl, but more importantly who is still trying to kill Marina. 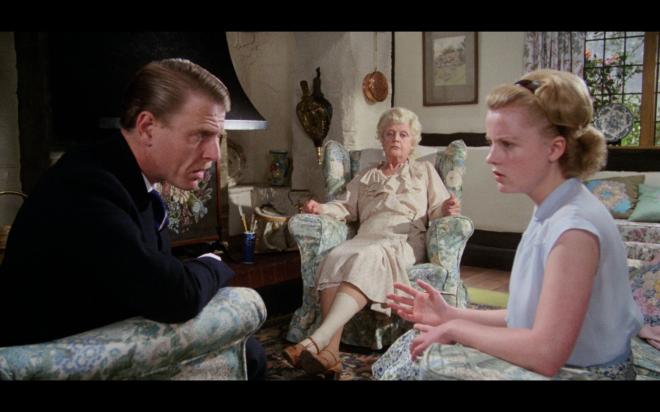 Veteran James Bond director and action/adventure maestro Guy Hamilton slows his pace down to bring viewers a genuine thriller featuring some classic stars of the silver screen. Lansbury is Miss Marple through and through. No stranger to Agatha Christie adaptations with her hilarious turn in Death on the Nile - Lansbury is right at home as the classic busybody who knows everything that happens in town. Even sidelined with a sprained ankle, she's abreast of the situation and through regular gossip parses all of the clues while her nephew gathers the evidence. With one woman dead, there's a ticking clock element in play as the killer missed their intended target giving Marple some drive to figure things out quickly

There's a sly sense of humor throughout as Hamilton is taking the piss out of Hollywood with some pretty comical portrayals of soulless producer Martin and his talentless leading lady Lola. At the same time, he gives Rock Hudson some great moments to shine as Jason - a man tormented by his dedication to his ailing wife while giving Elizabeth Taylor plenty of scene-stealing moments. Even when there's humor there's an ever-present sense of dread and danger that keeps the tone of the film on point without ever becoming too silly or too dour to enjoy.

I've only ever read a couple of Miss Marple stories from Agatha Christie. While the character is fine enough and the murders genuinely creepy and often pretty gnarly - there's something about "Murder in small-town England" that just feels old hat now. I'm sure had I read these books when they were fresh and new, they'd be truly exciting, but now with so many different BBC series effectively puling that story over and over, it's old hat and not very unique, I'm sad to say. While I do greatly enjoy The Mirror Crack'd - it's not my favorite Christie mystery.

Part of the problem facing the original novel and subsequently the adaptation is some tragic real-life Hollywood history. I won't detail the plot point here but it mirrors what happened to Gene Tierney. That's a sad story where if you're already familiar with kinda takes the wind out of the sail for this film. My other issue with this adaptation and it's a complaint I have of many Christie adaptations is the director getting too far ahead of themselves. In trying to be too stylized and clever they actually blow the mystery. Again I won't point to the specific scene - but when you see it early in the film, it's almost impossible not to have an "ah-ha" moment long before the final reveal.

Still - for enjoying a movie for the sake of entertainment, The Mirror Crack'd is solid material. The ticking-clock thriller works to the film's structure well enough and thanks to a great turn from Elizabeth Taylor, you do feel like she's in constant peril from anyone working that film set. Lansbury slips into the Marple role with ease - to the point it's shocking that she only played the part once. Lansbury's introduction scene spoiling the ending of a film is funny but also classic for the character:

By 1984 Lansbury had her own TV series where she was basically Agatha Christie solving murders making her time as Marple a one-off. Why play a character when you can play the creator and have just as much fun? All in all, this is a fun jaunt. I previously owned this movie in a three-disc DVD set with Death on the Nile and Evil Under The Sun. As those two films are routine summer viewing for me - it's impossible to pull that boxset out, watch those movies, and not watch The Mirror Crack'd. It's not perfect, but it's well made with terrific performances and absolutely well worth watching.

The Mirror Crack'd arrives on Blu-ray in the US thanks to Kino Lorber Studio Classics in a single disc set. The disc is housed in a standard sturdy case with reversible insert artwork. The disc loads to a static image main menu with traditional navigation options.

There's nothing indicated on the artwork about the vintage of this transfer but I have to guess it's the same 2K restoration that was used for the 2017 UK Blu-ray release from StudioCanal - and it's another gorgeous presentation. Again working from my old DVD as a basis of comparison, this is a leaps and bounds improvement. The English countryside locations, the lavish Hollywood production costumes for Mary Queen of Scotts all gain improved clarity and detail. Elizabeth Taylor's flower helmet hat thing (for lack of better words) deserves some pause, not for the odd fashion sense but for the detail. Facial features and makeup effects come through cleanly - the makeup to make Lansbury appear much older than she was at the time of filming is a notable point. Black levels are nice and inky, a few dark spots get close to crush, but nothing worth complaining about. Colors are also vibrant with a natural primary presence. There's always been a natural hazy quality to the imagery, so there are a few moments where softness can creep in but it's nothing too severe and absolutely part of the film itself and not a transfer issue. Free of any age-related issues like speckling or scratches, this is a terrific transfer that's damn near flawless.

Originally a mono mix theatrically - The Mirror Crack'd enjoys a welcome DTS-HD MA 2.0 mix that sounds as if it was reworked for a full stereo presentation instead of the single-channel spread throughout the front/center channels. If you're equipped, you can enjoy a little boost with DTS Neural:X - if you need it - but it's not necessary. This stereo track works nicely on its own. The most notable moments of imaging are the big party scene with busy voices and foot traffic throughout the house and then later again on the movie set. Most of the film is primarily conversational with only a handful of people in the room. Throughout, there is a nice sense of atmosphere and dimension. Levels are spot on with clean dialog and scoring. All in all a great mix.

Bonus features form The Mirror Crack'd aren't the most robust - but the audio commentary is well worth listening to. Berger, Mitchell, and Thompson provide great insights into the film and ensure the track is lively and informative throughout. The rest of the bonus features collection is made up of trailers.

The Mirror Crack'd may not be my favorite Christie adaptation - the film kinda spoils itself a little if you're really paying attention - but it's still great entertainment. Lansbury was made to play Miss Marple and she does a terrific job. That is to say nothing of the rest of the cast who are all great in their respective roles with Hudson and Taylor often stealing the show. Kim Novak earns points for a delightfully comedic turn. Kino Lorber Studio Classics delivers fans a first-rate Blu-ray offering with an excellent video transfer and audio mix to match. Bonus features may be slim, but the audio commentary is well worth the listen. If you're game for some murder mystery theatrics The Mirror Crack'd is Recommended.