Death on the Nile

The most famous detective in the world Hercule Poirot is sleuthing another dastardly murder while he should be on holiday in John Guillermin's adaptation of Agatha Christie's classic Death on the Nile. Peter Ustinov steps into the shoes of the infamous Belgian detective with ease allowing for the character's playful penchant for indulgence while never missing the chance for shrewd observation. A world-class production shot on location in Egypt, this is a gorgeous film perfect for Blu-ray from Kino Lorber Studio Classics. With a new 2K restoration the picture quality is impressive, the audio is equal to the task, and some decent bonus features tossed in spice up this mystery. Highly Recommended.

"Do not allow evil into your heart, it will make a home there."

A simple holiday enjoying the sights, the local cuisine, and a luxurious trip down the Nile is all that Hercule Poirot (Peter Ustinov) wants. A chance encounter with his old friend Colonel Race (David Niven) makes this vacation all the more pleasurable. However, with beautiful heiress Linnet Ridgeway Doyal (Lois Chiles) and her new husband Simon Simon MacCorkindale) as passengers on the same journey, drama follows in the form of Simon's spurned vengeful former lover Jacqueline (Mia Farrow) dogging the honeymooners' every move. If that wasn't enough - it would seem that every passenger on the steamship has an unfortunate history with Linnet and when the woman is found murdered, they all have means and motive to do her in. Now, it is up to Hercule Poirot and his little gray cells to crack the case and find the real killer. 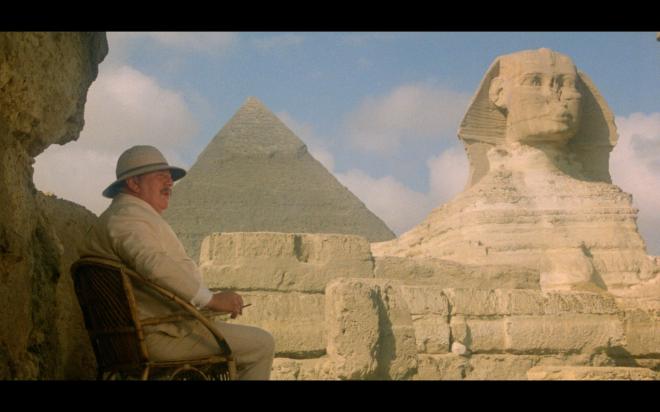 I love Agatha Christie novels - my wife and I read them all the time to unwind at the end of the day trying to keep ahead of the mystery and solve it before we reach the big reveal. But as much as I like reading the books, I like watching a smartly-produced adaptation even more. The original Murder on the Orient Express is one of my favorites with Albert Finney providing a memorable if slightly grumpier version of Poirot. And as great as Finney was in the role, I think I like Ustinov better in Death on the Nile. For one thing, he actually looks like he's enjoying himself. He leaned into the character's comical excesses much more naturally but when it came time to solve a crime he can still be deadly serious. There's just something charming about Ustinov in the role that made his seven appearances as Poirot so enjoyable. With that, I do have to tip my hat to David Suchet considering the breadth of time he spent as the Belgian sleuth for the BBC.

Much like Murder on the Orient Express - Death on the Nile is an impressively lavish production. Shot on location throughout Egypt, it's incredible to see the stars of this film racing horses next to the Sphinx or climbing to the top of the Great Pyramid of Giza. The fact you can't do that today makes this travelogue mystery all the more exotic. From the costume design to the set dressing, no expense was spared to recreate a pre-World War II Egyptian luxury travel experience. Aside from a dash of murder, it's the kind of journey you wish you could enjoy with these colorful characters. This scene before the cruise actually begins we get to see all of the cast in one place - and it showcases Angela Lansbury nailing boozy comedy. Watch how Ustinov and Niven react to her in complete terror with Betty Davis getting the final punchline of the moment:

On top of the impressive production design and locations, we have an incredible cast of colorful characters. In addition to Ustinov we have David Niven, Maggie Smith, Jack Warden, Simon MacCorkindale, Angela Lansbury, Olivia Hussy, George Kennedy, Jon Finch, Bette Davis, Jane Birkin, Lois Chiles, and Mia Farrow as the fully unhinged Jackie. Some characters are more comedic than others - Jack Warden's thick fake German accent is a trip while Angela Lansbury looks like she's having a hell of a fun time playing the boozy romance novelist. Farrow really brings it in her role as the spiteful Jackie dedicated to ruining her rival's honeymoon. But the standout performances come from the pairing of Ustinov with David Niven as they try to solve the case. During World War II, Niven was a Major while Private Ustinov was his personal assistant. It's that familiarity and very apparent deep friendship that shows in every scene they share together. When the two meet in the film it genuinely feels like two old friends bumping into each other again.

But, no Poirot mystery is complete without a great murder and this one is a cracker. Like any other Christie story there is a virtual army of possible killers, so the entertainment comes from watching Poirot gather his evidence and then run down all of the possibilities leading towards a grand reveal. Through it all director John Guillermin working from a script by Anthony Shaffer manages to keep the tension up and unravel the mystery without tipping his hand. That's often the trip-up of a bad Christie adaptation, the director thinks they're clever trying to shoot a scene a certain way or add a little pizzaz to a clue that didn't call for it. Instead of being clever, they spoil the show.

Death on the Nile and its followup Evil Under the Sun have become annual summertime viewing favorites. For about the last ten years or so I break out both films for a quick double feature. It's the combination of their sunny warm locations with Poirot going on a vacation that makes them appropriate seasonal viewings. Fed up with the ugly DVDs, I was just about to import the U.K. Blu-rays when Kino Lorber Studio Classics announced their U.S. Blu-ray debuts. It was tough going this long not breaking out my old DVDs but I'm glad I waited. As I said, this is a favorite and now with a new Death On The Nile coming soon to theaters - I'm all the more excited for some more Poirot. Hopefully, Branagh brings the new one home with a little more restraint than his Murder on the Orient Express - he certainly has a great cast so we'll see if he can rival this highly entertaining 1978 original.

Death on the Nile arrives on Blu-ray courtesy of Kino Lorber Studio Classics. Pressed on a Region A BD-50 disc, the disc is housed in a standard sturdy case with reversible insert art revealing both original theatrical poster options. The disc loads to a static image main menu with traditional navigation options.

Sourced from a new 2K restoration from StudioCanal - Death on the Nile offers an often stunning 1.85:1 1080p transfer for fans to enjoy. I can finally ditch the old DVD that featured a pretty dreadfully pixelated and unimpressive transfer. My understanding is this new transfer is the same one used for the 2017 EU releases in the U.K. and Germany. I was inches away from losing my patience and importing one of those when Kino Lorber announced this release and I'm glad I waited. From frame one the amount of detail is impressive. As a sequel to Murder on the Orient Express - this film is equally lavish. Details in costuming, the set design, makeup is all first-rate. Look at the robes Poirot, Race, and Dr. Besser wear when they're investigating the death - each has a distinct cloth and texture. Likewise, staterooms on the ship as well as the iconic scenic Egypt locations are impeccable.

This is also a very bright and vivid film with terrific colors. Replicating that 1930s pre-World War II aesthetic, primaries have lovely pop with blues, reds, and yellows getting equal play. Flesh tones are natural and healthy throughout - a fun sunburns creep in from time to time. Black levels are also on point allowing for deep inky tones and shadows to give the image a nice sense of three-dimensional depth. Whites can bloom a little here and there, but that's an artifact I've seen in every presentation of the film leading me to believe it's intentional. Shot by the legendary cinematographer Jack Cardiff who shot The African Queen… and Conan The Destroyer and Rambo: First Blood Part II - no frame is wasted and this transfer does this movie justice. Free of any age-related issues, speckling, or scratches - this is a terrific transfer.

No slouch to be left behind, the DTS-HD MA 2.0 mix is equally impressive. I never imported the EU releases so I don't have those as a comparison - but based on my old DVD, this mix is much more present, dynamic, with cleaner dialogue exchanges. Originally a mono release, this mix doesn't sound like a standard 2.0 mono track with the mix spread between the front/center channels and instead sounds as if it was redesigned as a specific stereo mix. Imaging naturally progresses between channels as characters move about the busy Egyptian markets. Hiss is also under control this time around. Sound effects are well spaced and each scene has a welcome sense of atmosphere from the tiny claustrophobic staterooms to the airy open decks. Free of any age-related issues - this is a terrific mix and serves this new transfer well.

While bonus features may not be the most plentiful bunch but there a quality assortment. The audio commentary with Howard S. Berger, Steve Mitchell, and Nathaniel Thompson is a great listen; very informative and engaging with lots of background about the production and shooting on location. There are some archival behind the scenes making of and interviews with Ustinov and Jane Birkin that are well worth taking a look at. After that, the rest of the bonus features are made up of KLSC's traditional collection of related theatrical trailers.

I love a great murder mystery and Agatha Christie wrote some of the best. With colorful characters and the Nile location - Hercule Poirot is in his element. One woman's murder and a ship full of suspects, it's a worthy successor to Murder on the Orient Express with Peter Ustinov providing an excellent Poirot. With another cinematic adaptation on the horizon, it was great to revisit this classic - and to see it looking and sounding so good was a treat. Kino Lorber Studio Classics delivers an excellent Blu-ray release of this film with a splendid A/V presentation and some worthwhile bonus features to sweeten the journey. Highly Recommended.