Evil Under the Sun

Murder strikes a luxurious exclusive vacation spot in the Adriatic Sea - and Hercule Poirot is on the case in Evil Under The Sun. Guy Hamilton returns to Agatha Christie's literary world of murder most foul with Peter Ustinov returning to headline this exotic mystery. Perhaps more relaxed than previous Poirot adventures with sharper humor, this is still a very rewarding and entertaining film with beautiful scenery captured in an impressive Blu-ray release from Kino Lorber Studio Classics with a score of classic Cole Porter tunes. Highly Recommended

A woman murdered on the Scottish moors. A fake jewel put up by a millionaire industrialist Horace Blatt (Colin Blakely) for an insurance quote. What these cases have in common? Seemingly nothing. But a curious Hercule Poirot (Peter Ustinov) loves a good brain teaser to exercise his little gray cells. When contracted to look into the matter of the fake jewel, Poirot finds himself vacationing at a luxurious socialite hotspot to understand why former showbiz star Arlena Marshall (Diana Rigg) who recently wed the wealthy Kenneth Marshall (Denis Quilley) would attempt to copy a rare jewel and pass off the forgery? She wouldn't. When Arlena is found murdered on the beach, every guest of the hotel is a suspect and Poirot soon learns every man and woman there has an ironclad alibi. 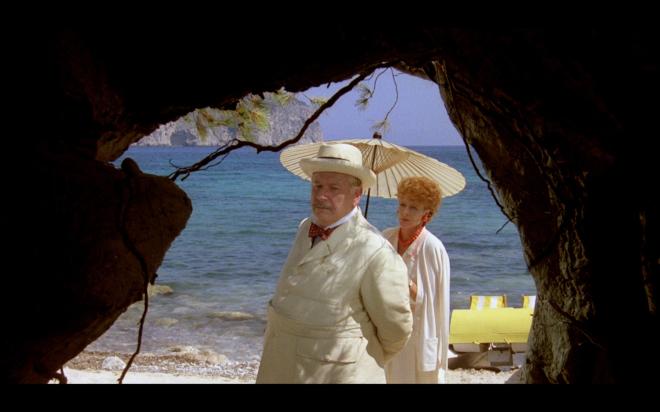 I'll say right out front and center that Guy Hamilton's adaptation of Agatha Christie's Evil Under the Sun is not the best Christie or even the best Poirot adaptation out there - but it's a favorite of mine nonetheless. With Death on the Nile being another summertime viewing favorite, this movie is genuine front to back fun. Ustinov is clearly having a great time as Poirot reveling in the character's eccentricities and indulgences while basking in an exotic location. This is a movie where the cast essentially went on vacation and made a movie. Everyone looks like they're enjoying the hell out of themselves and it shows in the magnetic energy of the film. Add in a brain teaser of a mystery with a dash of the good ol' murder and you have a great movie.

While Ustinov is the headliner as Christie's portly detective and holds most of the interest, the rest of the ensemble adds the color to this picture. Colin Blakely as the loud cantankerous Horace Blatt is a few jokes away from stealing Michael Palin's routine from Monty Python. Jane Birkin and Maggie Smith reunite with Ustinov from their days on the Nile together - albeit in different roles. Nicholas Lay looks like he's having a blast as the gigolo lover of Diana Rigg's sultry Arlena who manages to be the woman you love to hate. Roddy McDowall hams it up as only Roddy McDowall can as the showbiz tabloid gossip. Then we have husband and wife Broadway show producers Sylvia Miles and James Mason as Myra and Odell Gardener respectively. I love James Mason and anytime you get a scene that just lets James Mason ramble away - you're in for a treat. This scene where he proudly explains his lack of alibi should inspire more than a few Mason impersonations:

As I said, this one probably isn't the best Christie mystery out there. Even reading the book it should be fairly obvious who the killer or killers are - it's the "how" not the "who" that makes this one fun. As Ustinov's Poirot unravels the knot picking through each alibi, it's a fun twist and turn to the traditional "all will be revealed" moment so common with this style of murder mystery. Guy Hamilton kept things straight with The Mirror Crack'd and did an amiable job, but this time he deftly manages to avoid the pitfall of being too clever and accidentally pulling a big reveal before its time. Going in, the film is fun, light, sun-soaked entertainment and never once does Hamilton lose sight of that. When I sat down for Knives Out - it was Evil Under the Sun I most frequently thought of. Granted locations are not at all similar, but it's the playful tone that sells both films. Evil Under the Sun is a genuinely entertaining movie that remains so through multiple viewings. Pop some corn, put your feet up, and enjoy the show.

Evil Under the Sun arrives in the U.S. courtesy of Kino Lorber Studio Classics in a single disc Blu-ray release. Pressed on a Region A BD-50 disc, the disc is housed in a standard sturdy case with reversible insert artwork. The disc loads to a static image main menu with traditional navigation options.

Damn - I've honestly never seen this movie look this good. When StudioCanal punched this one out in 2017 in Europe with a fresh new transfer I was very tempted to import, but I held out hope that this would come stateside. Thankfully Kino Lorber Studio Classics stepped in because I've been waiting for this one for a long time! This new transfer handily puts my old DVD to shame and then some.

Like Death on the Nile, there is so much texture to absorb in the image. Every character wears intricately luxurious period clothing that you have to often pause the film to take it all in. Film grain is finely resolved and apparent giving the image a naturally film-like appearance. Colors are spot on with lush primaries and healthy skin tones - save for the characters obviously suffering some sunburn. Black levels are also on point with a nice deep inky presence. There aren't too many night-time sequences with most of the film taking place in bright daylight and throughout there is a terrific sense of three-dimensional image depth to enjoy. Without any sign of speckling or age-related issues, this transfer supplied from StudioCanal is the cream of the crop.

As was the case with Death on the Nile and The Mirror Crack'd - Evil Under the Sun was originally a mono track that now enjoys what sounds like a naturally engineered DTS-HD MA 2.0 stereo mix. With notable imaging effects and atmospherics, there's some welcome channel placement. Most scenes aren't too busy with a small cast, but a dinner show tune scene and later on the beach with waves rolling in the sound placement is welcome. The plot-essential Noonday-Gun cannon explosion is another dynamic sound effect that gets a little more oomph here than on my old DVD. The dialog is clean and clear throughout and the great score made up of classic Cole Porter numbers fully orchestrated is great stuff - Anything Goes is a great tune leading to the discovery of the murder. Clean of any age-related issues, this is another first-rate audio mix for this series of Agatha Christie films.

As with its Christie siblings, the bonus features package may not be the most robust available but what's here is some quality stuff. The big get - as with Mirror Crack'd and Death on the Nile is the new audio commentary with Berger, Mitchell, and Thompson. The three are in good form here keeping the track interesting and engaging with the film. After that, we get to enjoy an archival making of that is a bit lite and fluffy but worth it to see the cast and crew in action on location during filming - life looked really hard during that shoot.

Evil Under the Sun is pure entertainment gold through and through. Veteran Bond director Guy Hamilton allows Ustinov's Poirot to stick to the lighter side of things without becoming farcical. It's a summer vacation murder mystery and perfect viewing as the warm days subside and fall is about to creep in. Enjoy one last sun-drenched trip with a terrific cast, an exotic location, and a delightful brainteaser of a murder mystery. Kino Lorber Studio Classics delivers another first-rate Blu-ray release providing the film with an exceptional A/V presentation along with an interesting commentary track and an archival making-of featurette to round out the bonus features. Highly Recommended.