Romance on the High Seas

Romance on the High Seas may be best known as Doris Day's film debut, but it stands on its own as a charming, tuneful, carefree musical that's guaranteed to lift your spirits, especially during these difficult times. Slick direction by Casablanca's Michael Curtiz, spirited performances from Day, Jack Carson, Janis Paige, and Don DeFore, sprightly tunes (including the Oscar-nominated "It's Magic"), and a fast-paced script distinguish this romantic romp, but it's the brand new restoration from Warner Archive that will really grab your attention. Eye-popping Technicolor hues dazzle the senses from beginning to end, while vibrant audio showcases Day's honey-toned vocals. Add to that a few fun vintage supplements, and you've got a perfectly delightful Golden Age pleasure cruise that comes very highly recommended.

If Betty Hutton wasn't forced to bow out of Romance on the High Seas due to a pregnancy, Doris Day might never have become a movie star. Show biz careers often hinge upon such serendipitous breaks, and when Day got hers, she made the most of it. With a polished, unaffected performance that belies her lack of acting experience, the fresh-faced Day makes a delightful debut, not only showing off her mellifluous pipes, but also exuding boundless warmth, sincerity, and good humor. It's no wonder she instantly became America's newest screen sweetheart.

Day without a doubt enhances the appeal of Romance on the High Seas - as do such colorful actors as Jack Carson, Janis Paige, Don DeFore, Oscar Levant, S.Z. Sakall, Eric Blore, and Franklin Pangborn - but she's not solely responsible for its success. On the contrary, this sprightly comedic musical is a streamlined vehicle that runs on the considerable talent of a behind-the-scenes army of veteran craftsmen, including such Casablanca alumni as director Michael Curtiz and screenwriters Julius J. and Philip G. Epstein. Factor in additional dialogue by Billy Wilder's future collaborator I.A.L. Diamond, several catchy tunes from the top-notch team of Jule Styne and Sammy Cahn, and musical numbers conceived and directed by Busby Berkeley, and you've got a movie that fires on a variety of cylinders.

All that and Technicolor, too. And what Technicolor! Romance on the High Seas maximizes the impact of the three-strip format, stoking our senses with gloriously lush hues that complement the shipboard setting and exotic ports of call. Musicals and Technicolor were a match made in movie heaven, and thanks to cinematographer Elwood Bredell (known during most of his career as Woody Bredell), beautiful images abound. 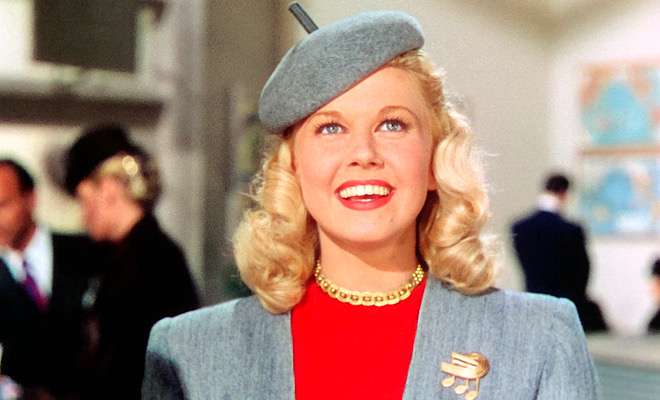 The fluffy yet witty story chronicles the complications that develop when suspicious wife Elvira Kent (Paige) hires struggling singer Georgia Garrett (Day) to impersonate her on a South American pleasure cruise so she can stay home and surreptitiously spy on her husband Michael (DeFore), whom she believes is cheating on her with his ditzy blonde secretary. Michael, however, worries Elvira might step out on him while on the cruise, so he hires private detective Peter Virgil (Carson) to keep a well-trained eye on her.

Of course, Peter believes Georgia - who herself is pursued by wisecracking piano player Oscar Farrar (Levant) - to be Elvira, and after getting to know her, he begins to fall for her, too. That causes long-distance tension between him and Michael, who doesn't know the real Elvira is still safely ensconced in New York. Circumstances eventually bring all four principals together, and that's when this madcap romantic mixup really revs up.

Day may receive fourth billing behind Carson, Paige, and DeFore, but Curtiz constructs Romance on the High Seas as a lavish coming out party for his bright new star. He makes sure she's the focus of every scene in which she appears, and he and Busby Berkeley lovingly photograph her whenever she sings. It's difficult for an untrained actress to carry a movie, especially in her debut, but Day handles the Herculean task with surprising ease. Whether she's adopting a hoity-toity accent while masquerading as the upper-crust Elvira or playing the gum-chewing, Brooklyn-born Georgia, Day exudes boundless charm, and her innate screen sweetness is never cloying. And when she sings, to quote the movie's signature tune, it's magic. 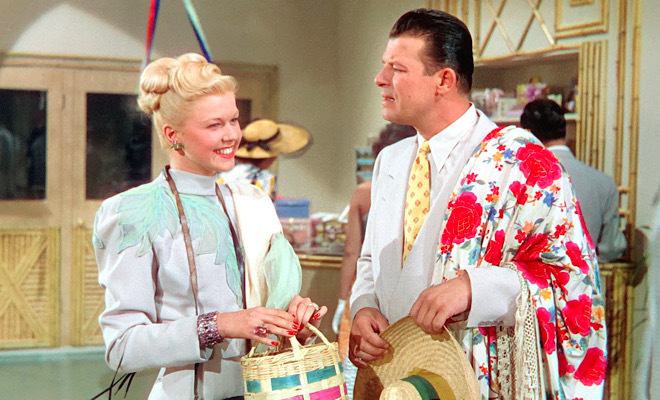 "It's Magic" nabbed an Oscar nod for Best Song (Ray Heindorf's music also received a nomination), and the lilting melody becomes the film's unofficial theme. Day performs it three times in various settings, but despite the repetition, it never gets old. That's a tribute to Day's ethereal delivery, which also shows off to superior advantage such bouncy, clever, lyrical, and infectious Styne-Cahn gems as "I'm in Love," "It's You or No One," and my personal favorite "Put 'Em in a Box, Tie 'Em with a Ribbon (and Throw 'Em in the Deep Blue Sea)."

Carson, Levant, and specialty performer Avon Long all get a chance to sing too, but in a head-scratching move, the bubbly, underrated Paige, who possesses a powerhouse voice (she would later star on Broadway in The Pajama Game [ironically Day would play her part in the movie version] and is probably best remembered for performing the energetic "Stereophonic Sound" number with Fred Astaire in Silk Stockings) is musically muzzled. The snub isn't quite as bad as Barbra Streisand's silencing of Mandy Patinkin in Yentl, but it's close. 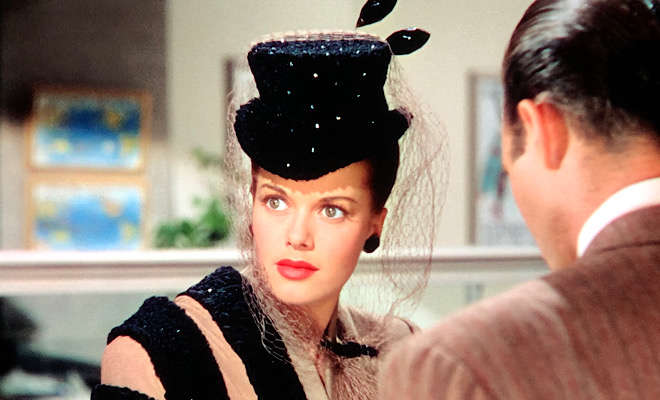 When you see Busby Berkeley's name on the screen, you expect at least one big, splashy production number, but he's surprisingly reserved here. The reason might have something to do with his ongoing dispute with Warner Bros over his desire to produce, which would end with Berkeley's acrimonious departure from the studio shortly after the release of Romance on the High Seas. The one number that has his fingerprints on it is the Latin-tinged "The Tourist Trade," which is catchy and colorful, but hardly representative of the wild creativity that defines most of his work.

Though Curtiz was no stranger to musicals - he previously directed biopics about George M. Cohan (Yankee Doodle Dandy) and Cole Porter (Night and Day) - the genre really isn't his forte, and yet he brings a marvelous sense of warmth, whimsy, and lyricism to Romance on the High Seas. He would work with Day three more times over the next three years, further honing his musical talents before helming one of the all-time great holiday classics, White Christmas.

Romance on the High Seas may not rank as one of the most innovative or artistic Golden Age Hollywood musicals, but it's definitely one of the most delightful. Like a breath of fresh ocean air, this breezy, funny, romantic trifle sails along, buoyed by Day's beguiling talents. The dawn of Day's career remains bright and fresh more than seven decades later, and reminds us just what a treasure this talented lady was. 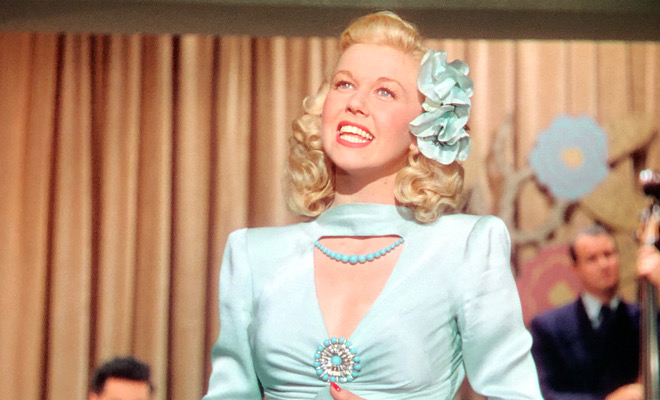 Romance on the High Seas arrives on Blu-ray packaged in a standard case. Video codec is 1080p/AVC MPEG-4 and audio is DTS-HD Master Audio 2.0 mono. Once the disc is inserted into the player, the static menu with music immediately pops up; no previews or promos precede it.

Technicolor often resembles a rich dessert, with luscious, calorie-laden hues producing a delicious picture that dazzles the eyes. When handled with care, Technicolor is a glorious thing, and Warner Archive lavishes plenty of love on Romance on the High Seas. The studio renders a delectable 1080p/AVC MPEG-4 transfer from a brand new 4K restoration of the movie taken from the original nitrate Technicolor negatives. Exceptional clarity and contrast, a lovely grain structure that preserves the feel of celluloid, and of course all that glorious, perfectly timed color distinguish this sublime effort that keeps us transfixed from the first frame to the last.

The image is so crisp, you can easily count the freckles on Day's face and identify individual strands of her hair as they gently blow in the ocean breeze. Deep black levels and bright whites nicely balance the array of hues, which are on full display when a barrage of multi-colored balloons float across the screen during the film's final minutes. Primaries and pastels are equally strong, yet they never look garish. Flesh tones appear natural and remain stable, costume textures are vivid, jewels and sequins sparkle appropriately, background details are easy to discern, and the sharp yet lush close-ups of Day and Paige fairly drip with Hollywood glamor. To top it all off, not a single nick, mark, or scratch dots the pristine print.

Romance on the High Seas is a delightful movie, but this top-notch, five-star transfer makes it delicious and de-lovely, too.

The DTS-HD Master Audio 2.0 mono track supplies clear, well-modulated sound that beautifully showcases the mellifluous tones of Day's silky smooth voice. Excellent fidelity and tonal depth make this musical sing, and a wide dynamic scale handles all the highs and lows of Ray Heindorf's lush, Oscar-nominated orchestrations without a hint of distortion. All the dialogue is nicely prioritized and easy to comprehend, and no age-related imperfections like hiss, pops, and crackle intrude.

A couple of entertaining vintage supplements round out the disc.

Light, tuneful, bursting with eye-popping Technicolor, and boasting a top-flight cast, Romance on the High Seas is just the type of joyful escapist fare we're all craving right now. Doris Day's film debut remains a buoyant tonic that perfectly shows off its fresh-faced, velvet-toned star, who croons such infectious songs as "It's Magic," "I'm in Love," and "Put 'Em in a Box, Tie 'Em with a Ribbon (and Throw 'Em in the Deep Blue Sea)". Director Michael Curtiz imbues the madcap romantic hijinks with his signature flair, while Day, Jack Carson, Janis Paige, Don DeFore, and a host of others file spirited performances. A brand new restoration that immerses us in a rainbow of perfectly pitched Technicolor hues, vibrant audio, and a couple of vintage supplements distinguish Warner Archive's scrumptious Blu-ray presentation that makes this 72-year-old musical look like it was produced yesterday. Romance on the High Seas may be fluff, but it's a peachy keen pleasure cruise for musical mavens, Day fans, and anyone who loves good old-fashioned entertainment. Highly Recommended.