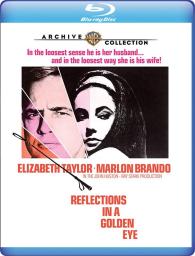 "An Army post in peacetime is a dull place." So begins Carson McCullers' famous novel of secret passion, Reflections in a Golden Eye. But beneath the smooth surface of military routine, a deadly tension mounts. Elizabeth Taylor and Marlon Brando star in this startling screen version that, like the book, crackles with mysterious, exotic energy. They play the Pendertons: He's a hidebound career officer wrestling with inner demons; she's a caged lioness needful of love, whatever the source. Their off-kilter relationship plays out under the voyeuristic gaze of a soldier (Robert Forster) soon to become the focal point of tragedy. Provocatively directed by John Huston, and costarring Brian Keith and Julie Harris in moving supporting performances, this spellbinder is powerful and complex – just like that emotion called love. This 2-disc set presents Reflections in a Golden Eye in both of its forms: the original "gold"-hued version of the film, as legendary director Huston intended, and the full-color general theatrical release version. Both have been newly remastered especially for this release.