After witnessing her cousin's death, Catherine Holly begins to suffer mental problems. Her aunt, Violet Venable attempts to persuade neurosurgeon Dr Cukrowicz to perform a lobotomy in order to put an end to Catherine's hallucinations and the truth coming out about her son's death.

Leave it to Tennessee Williams to pack more taboo topics into a single movie than anyone else. The Pulitzer Prize-winning playwright, who penned such classic and important dramas as The Glass Menagerie, A Streetcar Named Desire, and Cat on a Hot Tin Roof, never shrank from exploring provocative themes and forcing audiences to face difficult truths. Yet in Suddenly, Last Summer, a one-act play that director Joseph L. Mankiewicz expanded into a feature film, Williams tackles a plethora of hot-button issues, including homosexuality, incest, rape, lobotomy, mental illness, and most shocking of all, cannibalism. That's quite a menu for any motion picture, let alone one made back in 1959, but Williams and screenwriter Gore Vidal seamlessly tie all those sensational subjects together. The delicious (no pun intended) result is a highly disturbing, occasionally grotesque, yet absolutely riveting production that still leaves audiences breathless almost six decades later.

Hollywood censors always watered down the screen adaptations of Williams' plays, altering key plot points and shrouding much of the drama's meat in innuendo, yet luckily for us, a special dispensation was granted to Suddenly, Last Summer (I have no idea why) so it could address homosexuality more directly. Maybe that's one reason why the film holds up so well, because instead of being forced to read between the lines, we can follow exactly what's going on and more completely absorb the impact. Even today, it's hard to watch this movie without squirming a bit, but the uncomfortable moments are well worth enduring. Just hearing the lyrical, often poetic dialogue, which is laced with vivid imagery, and watching the likes of Elizabeth Taylor, Montgomery Clift, and especially Katharine Hepburn recite it is a rare privilege. Factor in Mankiewicz's marvelous direction, and you've got a cinema classic that deserves far more respect than it's gotten over the years.

Maybe the lurid subject matter has tarnished the reputation and colored the perception of the film, which presents a negative, often horrific view of life on Earth. The cannibalism depicted and alluded to is more metaphoric than actual, evoking a primitive dog-eat-dog society in which only the fittest survive and the rest are grossly chewed up and spit out. In often stark terms, Williams shows us how man devours man socially, morally, economically, professionally, and sexually, and how the human appetite for power and domination at any cost is voracious and insatiable. And if that isn't enough, such familiar Williams themes as greed, family dynamics, dark secrets, and the conflict between illusion and reality percolate within that provocative framework.

The story takes place in New Orleans in 1937, around the time a revolutionary brain procedure known as lobotomy begins gaining favor in the psychiatric community. For a time, the operation was a favored treatment for mental illness, especially for patients who exhibited violent tendencies or were prone to unexpected outbursts. Dr. Cukrowicz (Clift), one of the pioneering surgeons in the field, has recently joined the staff of a Louisiana state hospital that's badly in need of funding to improve its deplorable conditions. The city's richest woman, Violet Venable (Hepburn), pledges to sponsor the hospital if - and only if - Dr. Cukrowicz agrees to perform a lobotomy on her troubled niece, Catherine Holly (Taylor), who, Violet says, suffers from ghastly delusions following a traumatic European trip with her beloved and recently deceased son, Sebastian, who died "suddenly, last summer."

Violet and Sebastian were abnormally close, and she speaks of him with a reverence bordering on idolatry. The two would travel together overseas each summer, but this past season, Violet was too ill to go, so he took cousin Catherine in her place. Catherine witnessed his death, supposedly from a heart attack, and soon after suffered a complete mental collapse. According to Violet, her erratic behavior includes delirious ravings (many of which involve Sebastian), angry outbursts, and sexual promiscuity. The hospitals can't handle her, so Violet believes a lobotomy is the only answer, and hopes the procedure will forever calm her niece, tame her vicious tongue (which she worries will desecrate Sebastian's legacy), and erase from her infected brain the fractured memories of that fateful summer.

Yet Catherine believes she isn't that sick, and accuses Aunt Vi of purposely committing her to an awful asylum from which she cannot escape. Though tortured by Sebastian's death, Catherine has blocked out the circumstances surrounding it, and when she learns Violet has promised her mother (Mercedes McCambridge) and brother (Gary Raymond) $100,000 each from Sebastian's estate if they convince her to sign the consent papers for the lobotomy, she realizes Violet - for whatever reason - doesn't want her to remember. Dr. Cukrowicz believes Catherine's memory holds the key to a horrific mystery, and if he can unlock it, he might be able to save her from Violet, her family, and herself.

Williams was quite familiar with his material. Shockingly, his mother authorized a lobotomy for his beloved sister because she was offended by her daughter's obscene speech (the incident reportedly haunted Williams for the rest of his life), and the violence Williams experienced in his own early homosexual encounters found its way into the story as well. Such intimate connections somehow make the nefarious goings-on more plausible, if not palatable, and add more meaning to the fascinating themes. Williams' fearlessness in examing such unpleasant events is admirable, but his eloquence is often awe-inspiring. If you love language, you will love this film.

And if you love great acting, it's impossible not to appreciate the performances of Hepburn and Taylor, both of whom nabbed nominations for Best Actress Oscars. (Typical of such situations, the two of them most likely split the vote, and the award ended up going to Simone Signoret in Room at the Top.) Hepburn owns the first third of the movie, and her electrifying portrayal of obsessive love, abject disgust, and dreamy delusion is mesmerizing. Mankiewicz believes Taylor's turn as Catherine was "the best screen performance [she] ever gave," and he may well be right. Bold, sassy, and ultimately heartbreaking, Taylor runs the gamut of emotions, and her lengthy, fraught monologue that details Catherine's tragic trip with Sebastian crescendoes to a shattering climax. (Though a bit zaftig, Taylor still looks ravishing throughout, and caused quite a stir in a revealing white bathing suit that plays a significant part in the story and incited a firestorm of controversy at the time of the movie's release.)

Clift's role is rather passive, but he projects palpable sensitivity as the doctor who helps Catherine cleanse her conscience, and McCambridge brightens up the dour doings as Catherine's simpering mother. Mankiewicz, who often coaxed first-class performances from the actors with whom he worked, weaves his magic here, too, but the real surprise is his direction. Many Mankiewicz films lack panache due to their static presentation, but an elegant fluidity pervades Suddenly, Last Summer, especially during Catherine's climactic monologue, which juxtaposes extreme close-ups of Taylor on the right side of the screen with the enactment of her memories on the left. It's quite an effect, and Mankiewicz flawlessly executes it.

Suddenly, Last Summer is far from Williams' best play, but it's one of the better screen adaptations of his work. Casting an often mesmerizing spell as it embraces both beauty and horror, the film provides us with much to chew upon (this time, the pun is intended). You might not want to discuss it over dinner (especially if you're having fava beans with a nice Chianti), but it certainly merits reflection, as well as appreciation for the direction, performances, and most importantly, the writing. Bon appétit! 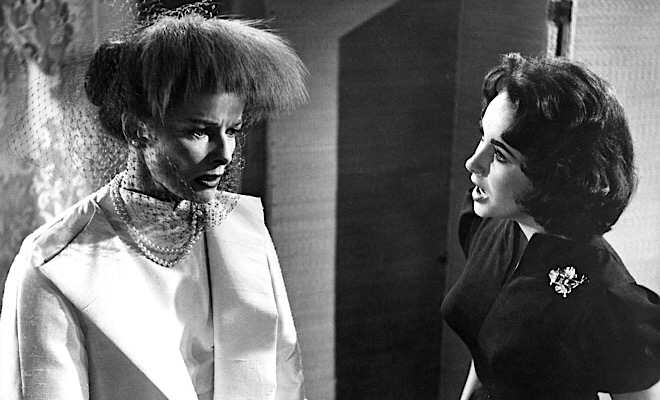 Suddenly, Last Summer arrives on Blu-ray in a limited to 3,000 edition packaged in a standard case. An eight-page booklet featuring an essay by writer Julie Kirgo, a few black-and-white scene stills, and a reproduction of the movie's poster art is tucked inside the front cover. Video codec is 1080p/AVC MPEG-4 and audio is DTS-HD Master Audio 1.0. Once the disc is inserted into the player, the static menu without music immediately pops up; no previews or promos precede it.

The subject matter may be ghoulish, but the 1080p/AVC MPEG-4 transfer from Twilight Time (care of Sony) looks glorious. Superior contrast and clarity instantly grab attention, bringing fine details like the textures of the bricks in the asylum wall that provide a backdrop for the main titles to brilliant life. Suddenly, Last Summer received an Oscar nomination for its art direction and set decoration, and all the intricate wallpaper patterns, furniture carvings, delicate lacework, precious knick-knacks, and exotic plants that adorn the ornate Venable estate are beautifully defined. Taylor’s jet-black hair and dress are deliciously rich in tone, while Hepburn’s all-white attire, the blistering sand of the Spanish beach, the doctors’ surgical gowns, and Taylor’s notorious white bathing suit (see Blu-ray cover art above) are vibrant and crisp. The grays in between flaunt plenty of variances, the complex weave on Clift's sport jacket remains rock solid, and the lines of both deep and faint shadows are sharp and firm. Close-ups, many of which are extreme, show off Hepburn’s freckles, the beauty marks that dot Taylor’s skin, and the scar on Clift's neck from his severe auto accident a few years earlier. A consistent grain structure lends the image a lovely film-like feel, and the pristine source material is free of any age-related nicks, scratches, or dirt. With its use of split screens during the extended flashback sequence and both dark and blindingly bright locations, Suddenly, Last Summer presents many visual challenges, but this balanced, meticulously restored transfer tackles them all, giving fans like myself who have waited many years for the film’s Blu-ray debut plenty to crow about.

Sonic subtleties and accents abound in Suddenly, Last Summer, from a creaking wooden rocking chair, ticking clock, and humming electric lamp to the cacophony of asylum inmates and a blaring alarm bell, and the DTS-HD Master Audio 1.0 track maximizes them all. Of course, dialogue is the star of this drama, and all the poetic speeches and fiery confrontations are clear and easy to comprehend. A wide dynamic scale handles the music’s soaring strings and the island native's dissonant percussion with ease, and no distortion creeps into the mix. No hiss, pops, crackles, or other imperfections mar this well-modulated track that provides plenty of atmosphere without detracting from the on-screen action.

The only supplements are high-def exclusives (see below).

Suddenly, Last Summer stands as one of Tennessee Williams’ most stirring, provocative, and disturbing works. The drama paints a bleak portrait of mankind as it depicts a carnivorous world where cannibalism takes many forms and is often inescapable. It’s definitely not a film for the faint of heart, but for those who find exploring the dark recesses of the human brain intriguing, this riveting tale of twisted desires and man's inhumanity to man is morbidly fascinating. Though extras are disappointingly slim, Twilight Time's Blu-ray presentation features a smashing video transfer and excellent audio, and comes highly recommended.