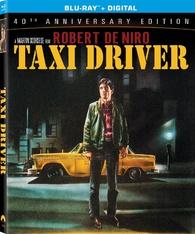 Sure, we all remember Robert De Niro looking in the mirror, aiming his gun, sizing up an imaginary assailant with wide eyes and a slightly crazed smirk on his face, and asking that loaded question, "You talkin' to me?" It's an iconic movie moment and quote, much like "Rosebud," "Frankly, my dear, I don't give a damn," and "Go ahead, make my day," but it doesn't define 'Taxi Driver.' The blossoming talent of Scorsese does, coupled with a timely - and in many ways timeless - story that continues to strike a nerve and provoke spirited discussion about society, law and order, and the complex circuitry of the human brain 40 years after its premiere. And without De Niro's mesmerizing portrayal of the isolated, tortured, and disturbed Travis Bickle, it's difficult to determine whether the film would wield the same degree of impact. 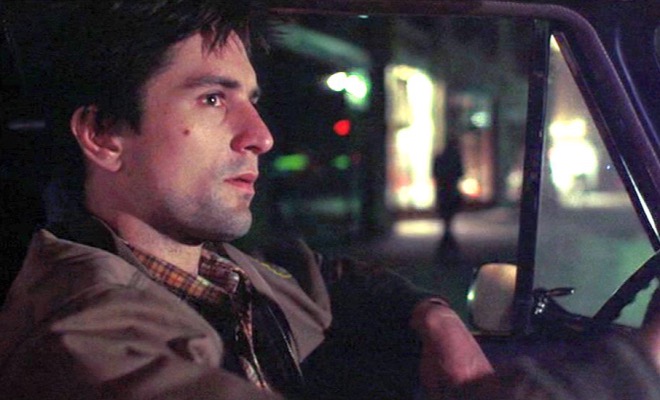 First things first. This 40th Anniversary Edition of 'Taxi Driver' does not contain a new video transfer and is almost exactly the same as the film's first 2011 Blu-ray release with regard to extras. The addition of a new supplement (described below) most likely expanded this anniversary release into a two-disc set, and though it's attractively packaged in a standard case inside a sleeve, the 2011 digibook packaging is still far superior. A leaflet containing a code to access the Digital HD with Ultraviolet copy is tucked inside the front cover, and just like the previous Blu-ray versions, video codec is 1080p/AVC MPEG-4 and primary audio is DTS-HD Master Audio 5.1. Once the disc is inserted into the player, the full-motion menu with music pops up immediately following the Sony logo; no previews or promos precede it.

No new transfer here, but honestly, who needs one? The existing transfer is a five-star beauty - remastered in 4K and supervised by director Martin Scorsese and cinematographer Michael Chapman - that's the definitive rendering of this classic film. Here's what I said about it back in 2011:

Who knew grit and grime could look so beautiful? 'Taxi Driver' showcases some of the seediest areas of 1970s New York, but Sony's striking 1080p/AVC MPEG-4 transfer captures it all with marvelous clarity, stunning depth, and well-modulated hues. Grain is an essential aspect of this film, yet it never overpowers the image. As a result, the picture sports a consistently natural, film-like look that draws us deep into the Big Apple's core and Travis' twisted psyche. The intentionally blurred city lights in the movie's opening sequence are crisply rendered, as are details such as rain droplets, while nicely graded contrast lends the overall picture surprising dimensionality for such an aged film. The source material looks as clean and vibrant as any recent release, with no blemishes of any kind catching the eye.

Colors appear bright and bold, but thankfully lack any hint of artificiality. The reds in Palantine's political office enjoy fine presence, and the yellows of the omnipresent taxi cabs look lush yet realistic. Black levels are deep and inky, and though one might think the predominance of nocturnal scenes would yield a few murky shots or incidents of crush, every nighttime sequence brims with well-defined details. Whites are cool, but never harsh; Shepherd's dress stands out well against the busy background of the cityscape while maintaining a lovely softness. Background elements occasionally look a bit fuzzy, but that's a minor quibble, and fleshtones are always spot-on. Close-ups exude a marvelous immediacy, with every skin blemish and hair follicle clear and distinct.

Yet the most indelible impression this transfer makes is the wonderful texture that enhances every frame. Rarely do high-definition movies look so much like celluloid, while maintaining the sharpness that's such a vital component of the Blu-ray format. And Sony has taken extra special care to keep the film's original look intact, steering away from edge enhancement, noise reduction, and other fine tuning elements. Banding and mosquito noise are also absent from this superior effort from Sony, which ranks up there with another of its 1970s Blu-ray gems, 'Kramer vs. Kramer.' Not only has 'Taxi Driver' never looked better, it's also one of most faithful and satisfying transfers of a film from this era that I've seen.

The DTS-HD Master Audio 5.1 track is also top-notch, and it's the exact same one that's included on all previous Blu-ray releases of 'Taxi Driver.' Though surround activity is limited, the excellent fidelity, dynamic range, and purity of tone, especially with regard to Bernard Herrmann's sultry, silky score, make the audio sound like it was recorded yesterday instead of 35 years ago. Herrmann's music, which combines dramatic elements of his classic Hitchcock scores with smooth, jazzy horns (I cannot get enough of the recurring theme), dominates this track, but the subtleties of the New York streets, bursts of gunfire, and voiceover narration all possess terrific clarity and presence. Dialogue is often spoken softly or delivered in an offhand manner, yet I never had to strain to understand the words. And though there are no thunderous bass moments that set off the subwoofer, low-end tones are warm and weighty, consistently complementing the rest of the audio. Distortion and surface defects are totally absent, making this track as immersive and pleasing as the video. 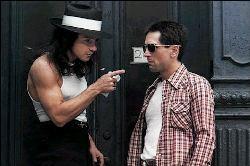 Only one new supplement is included, and though it's a good one, it's not worthy of a double dip if you already own the 2011 release. All the other extras from the 2011 Blu-ray edition have been ported over, except for the Interactive Script to Screen feature, but this time they're spread across two discs. The huge supplemental package examines multiple aspects of this fascinating film, heightening both our understanding of its themes and admiration for the talents involved. All the material is absorbing and classily produced.

If you own the terrific 2011 Blu-ray edition of 'Taxi Driver,' there's no need to purchase this 40th anniversary release, despite the addition of a brand new supplement. The transfers and all the extras are the same, yet the 2011 collectible insertions and digibook packaging give that release a substantial edge. However, if you don't yet own Martin Scorsese's classic, and if a digital copy - and price - are important to you, then this 40th anniversary edition is the better choice. Either way, 'Taxi Driver' remains one of the best films of the 1970s. Nominated for four Academy Awards, including Best Picture, Best Actor, Best Supporting Actress, and Best Original Score (Scorsese, in the first of many Oscar snubs, was inexplicably overlooked), this unsettling yet marvelously mounted and performed motion picture still provokes the same strong reactions as it did upon its initial release four decades ago. Call him a psycho, call him a devil-turned-savior, call him a paranoid vigilante, but any way you look at him, Travis Bickle is one memorable character, and De Niro makes him unforgettable. This new release may lack the classy packaging of its predecessor, but the content is all there and the excellent video and audio quality hasn't changed, which is why the 40th Anniversary Edition of 'Taxi Driver' comes highly recommended.

Sale Price 14.5
List Price 19.99
Buy Now
3rd Party 7.14
In Stock.
See what people are saying about this story or others
See Comments in Forum
Previous Next
Pre-Orders
Tomorrow's latest releases