Douglas Sirk brings the western adventure Taza, Son of Cochise to the big 3-D Screen with Rock Hudson, Rex Reason, and Barbara Rush. As one of the first Hollywood westerns to attempt to treat native people with some respect, but through the rose-colored glasses of time, the casting of white actors in the lead with copious redface it can be a little dicy. With some small measure of historical accuracy, Taza works well to balance action and drama with some gorgeous 3-D photography. 3-D Film Archive with Kino Lorber Studio Classics delivers a beautifully restored image from a new 2K master with impressive three-dimensional depth, clean audio, and a great audio commentary to round out the bonus features. The film works in 2-D - but it's meant for those keeping their 3-D screens alive. Highly Recommended.

"It takes an Apache to watch an Apache."

Cochise (Jeff Chandler) is dead. His two sons Taza (Rock Hudson) and Naiche (Rex Reason). Taza wishes to follow the honor of his father and maintain the peace between whites and the Apache. Naiche wishes to join forces with Geronimo (Ian MacDonald) and make war with the white soldiers lead by Captain Burnett (Gregg Palmer). Burnett wishes to work with Taza and allow Apaches to police their own, but the delicate peace will be tested as Taza and Naiche spar for the love of Oona (Barbara Rush). 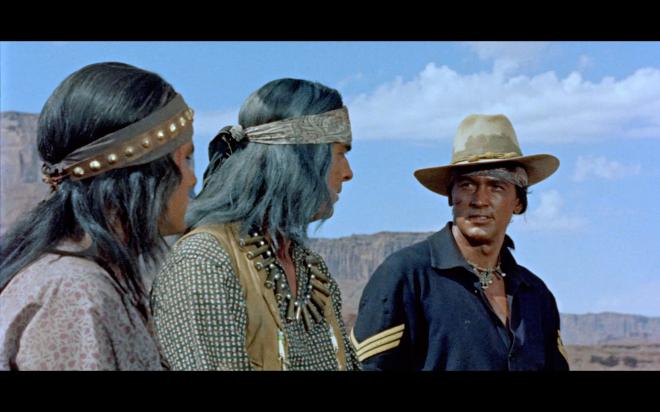 It doesn't take much research - or imagination - to quickly realize that Taza, Son of Cochise isn't exactly historically accurate. But it actually gets a lot more right than one would think. There was a Taza, he did have a brother called Naiche, and he did follow his father Cochise as leader of the Chiricahua Apaches. And in his time Naiche did join Geronimo on the warpath. But that's where all of the historical accuracies end giving rise to Hollywood's penchant for melodrama and a need for some action and adventure to happen during a western - especially one shot in 3-D.

While the casting may seem questionable by today's standards, one has to give the participants credit to give their characters some semblance of authenticity. The script by George Zuckerman and Gerald Adams offers up some nice character nuances well beyond the cliched "How, white man!" Hudson, Reason, and the rest of the white actors may speak in halting English, they're not playing up caricatures. Likewise, white characters aren't all abashedly racist. Sure there are a couple of rotten eggs in the box, but most of the characters aim to give Taza and his people a chance rather than shoot first and never bother to ask questions later.

As a Western, it's above average as it plays to a pretty typical plotline, but the film's real strength is the action and the Arches National Park locations captured in beautiful natural 3-D. A couple of years ago I got to hike around Arches and it's a gorgeous place to visit so seeing a Western staging some impressive action sequences were a lot of fun. The 3-D photography lends itself well to the show with arrows, spears, and rifles pointing out of the screen - there's a natural presence to the depth without ever feeling overly gimmicky. A fight between Taza and Naiche, in the beginning, is a terrific example complete with a hell of a stunt fall with a man going over the side of a cliff with the camera overhead! It's thrilling stuff. As I said, maybe not the best Western to come down the pipeline, but it's well-meaning and serves up the entertainment value all in splendid natural 3-D!

Taza, Son of Cochise arrives on Blu-ray courtesy of 3-D Film Archive and Kino Lorber Studio Classics. Pressed onto a Region A BD-50 disc, the disc is housed in a standard Blu-ray case. If you're 3-D ready, the disc loads automatically to 3-D with a static image main menu with traditional navigation options. If you'd rather watch Taza in 2-D you have the option to do so.

Taza, Son of Cochise is another near-flawless restoration from the team at 3-D Film Archive. Working from a new 2K master, the film offers up impressive three-dimensional depth, image clarity, and bold colors. From the opening credits onward there is some terrific three-dimensional staging. With the wide-open scenery, there's plenty of deep depth into the Z-axis - with some clever staging of brush and trees to keep depth alive at all times.

Fight sequences with spears and knives offer up some terrific close-up 3-D action. Like I mentioned in the review - that first fight between Taza and Naiche is a great example. Later a raid where a soldier gets shot with two arrows and skewered with a spear is another amazing moment! Even simple scenes inside the solider's fort or a wickiup provide nicely cinematic depth.

Throughout the film, details remain robust allowing you to fully appreciate facial features, makeup, and costuming patterns. Grain is intact and natural giving a nicely film-like appearance.  While this film features a who's who of recognizable genre stars, the film's main visual draw is the scenery and the Arches national park footage is often breathtaking. Likewise, the battle sequences in and around some of the outcroppings and passes are well-staged allowing for some impressive 3-D as calvary soldiers ride at the screen and they're ambushed by Apaches suddenly popping up in the foreground!

As we've seen with past 3-D Film Archive releases, this is another amazing restoration effort. With only slight speckling and some backed-in rough around the edges process shots, the film is in amazing shape. Taza, Son of Cochise is another masterful example of what this team can do for classics - let alone ones shot in 3-D. With every release it's getting harder and harder to pin down their finest restoration efforts to date - but Taza ranks among their best alongside Gog, Sangaree, with It Came From Outer Space and Revenge of the Creature as my personal favorites. 3-D Rarities and 3-D Rarities Vol. II are also essential viewing. Once again I'm left chomping at the bit for the next release on their slate!

Taza, Son of Cochise arrives with a strong all-around DTS-HD MA 2.0 audio mix. From dialog to scoring it ticks off all the boxes. The dialog is clean and clear throughout - there are a couple of patches where it sounds as though the actors had to redub their lines as they sound like they're talking in a box instead of a wide-open landscape - but that's the only random oddity I noticed. Even with a restrained soundscape, there's a terrific sense of imaging. The best examples being anytime a horse rides from one side of the screen to the other - or during the climactic battle. Action sequences really amp things up nicely while the excellent Frank Skinner score keeps the dramatic beats alive. There's some occasional slight hiss during very quiet moments but otherwise, this track is in perfect shape.

With the focus of this disc providing excellent 2-D and 3-D video presentations, bonus features are a bit lean, but the audio commentary featuring David Del Valle and C. Courtney Joyner with 3-D Expert Mike Ballew is well worth the listen.

As a big fan of Westerns, I know when and where to set my bar for expectations. You don't always want to compare everything to The Searchers or Unforgiven. Some are meant for entertainment and Taza, Son of Cochise is certainly entertainment - with an earnest effort in the depiction of native peoples. While the cast may be all white donning redface - and would certainly be cringe-inducing today - one must also give credit to Douglas Sirk and his team for not making a stereotypical Cowboys and Indians feature. With an excellent cast, beautiful locations, and amazing 3-D photography, it's certainly a unique entry in a crowded genre.

3-D Film Archive with Kino Lorber Studio Classics delivers another first-rate restoration of a natural 3-D classic. For a feature made over 65 years ago, the image restoration for 2-D is something to see - let alone in 3-D! Depth to the image is magnificent throughout and lends itself well to the action. The audio mix handles its workload nicely and the audio commentary adds some great info about the production and its place in the first wave of 3-D classics to come out of Hollywood in the 50s. If you love Westerns you'll have fun with Taza, Son of Cochise. If you love 3-D movies, this is an essential piece of your classics collection - Highly Recommended.