Flicker Alley and 3-D Film Archive join forces once again to bring stereoscopic fans a collection of three-dimensional shorts and a full feature film with 3-D Rarities II. The collection of shorts are fun, but the restored Kodachrome photos are a real treat while the main draw is the newly restored El Corazón y la Espada featuring a young pre-Joker Cesar Romero as a swashbuckling treasure hunter! This set is the 3-D picture-perfect blend of film history education and entertainment sporting terrific 3-D transfers. If you love your films in all three dimensions - 3-D Rarities II is Highly Recommended.

As with Flicker Alley and 3-D Film Archive's 3-D Rarities - 3-D Rarities II sports an impressive collection of material long missing from movie theater screens - and never finding their way onto home video restored to their proper stereographic format. The collection of short subjects and deep archival material including A Day in the Country, Raymond Spottiswoode's The Black Swan, Midcentury Memories in Kodachrome Stereo narrated by Hillary Hess, Games In Depth, the prologue for Frankenstein's Bloody Terror, and a trailer for 1983's pseudo-documentary/scene anthology The 3-D Movie. 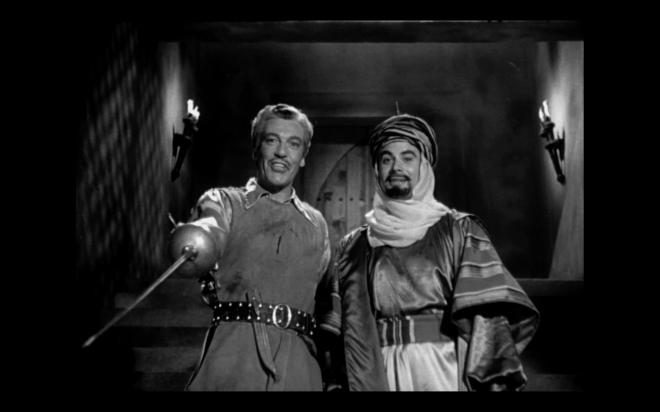 Each of these little nuggets is a bunch of fun in their own ways. The Black Swan was a great performance piece allowing the dancers and set staging to occupy an open canvas with great image depth throughout. Games In Depth is an odd short from Polaroid which doesn't have any throughline or connective tissue and to ramp up the oddness factor has numerous behind the scenes shots of Burt Lancaster at the craft service table in between takes on The Swimmer. It's shot from across the street practically so it looks more like paparazzi footage than a documentary of any sort! I long for the days where we can fully enjoy a restored Frankenstein's Bloody Terror in 3-D but that isn't likely to happen anytime soon sadly.

Of these, I fund the Kodachrome Stereo images and Hillary Hess commentary to be the most interesting. We saw something similar with 3-D Film Archive's 3-D Nudie Cuties collection - only these aren't professionally posed - it's all amateur photographs from regular folks who could afford that camera! People at Christmas parties, filling up gas at a road trip, hanging out with grandma - seemingly mundane stuff but it offers a true window into the past with bright vivid colors and impressive depth.

While the collection of short subjects is great, the true draw for this set is the newly restored 3-D presentation of Mexico's first 3-D film - El Corazón y la Espada (AKA The Heart of the Sword or The Heart of Granada) with Cesar Romero. I love a good swashbuckler flick and this one does an amiable job bringing the period action and romance as a thief and his pals quest for a lost treasure and his true heritage. The film itself isn't the most original but was very entertaining. The 3-D photography is what makes it stick. There are a lot of "walking along walls" sequences where someone is just going somewhere. Flat, this material is kinda boring, but in 3-D all of a sudden the image takes on some life and scale. The rest of the 3-D experience is nicely rounded gives some action a little extra in-your-face delight. A fun flick for sure and another stunning example of 3-D Film Archive's restoration wizardry.

After that, we return to the land of Kodachrome Stereo with an interesting collection of homemade stereoscopic photos from silent film star Harold Lloyd. Presented by his granddaughter Suzanne Lloyd Hayes, there are some very cool pictures here with a variety of screen legends hamming it up but a number of impressive snaps that offer up a perfectly preserved three-dimensional time capsule.

Obviously the best way to enjoy 3-D Rarities II is with a 3D television or projector setup. Sadly of late these models have fallen out of popularity with the general public and are becoming more difficult to locate at a justifiable cost. However, if you're already rigged up and ready to rumble - this set is terrific! You can watch these materials flat but they lose their visual punch and become simple curiosities. In full 3-D these little wonders become memorable experiences. 3-D Rarities II may not be as massive of a journey through the history of three-dimensional photography and filmmaking as the first 3-D Rarities, but this set preserves and showcases some important material that's all entertaining, informative, and a delight to watch.

3-D Rarities II arrives on Blu-ray thanks to 3-D Film Archive and Flicker Alley. Pressed on a Region Free BD-50 disc, the disc is housed in a standard clear case. Also included is a booklet containing essay materials and more information about the shorts, Kodachrome Stereo photos and other films produced during the golden era of 3-D movies. The disc loads to a static image main menu with standard navigation options. If you're 3-D ready your rig should automatically kick the 3-D setting on. When playing El Corazón y la Espada, you're given the option of original Spanish dialog with English subtitles or English dubbed dialog.

If you're in the market for the highest quality true 3-D movie experience, it doesn't get better than the efforts of the amazing team at 3-D Film Archive. Release after release, they've proven to be the best in their field - not only for 3-D films but they've assisted with 2-D releases now and they truly work wonders. Some of these short subjects like A Day In The Country are in roughed up shape due to decades of mishandling. Even as the roughest-looking example in the set, the image still offers up great detail clarity with impressive three-dimensional depth. The Kodachrome Stereo images are also a real treat because they're static, you just get to sit there and bask in the image depth, sharp detail, and bright vivid colors.

The main feature film El Corazón y la Espada is another terrific restoration. As documented in their Kickstarter to help fund this restoration, El Corazón y la Espada needed a lot of help! If you backed the effort as I did - you'll be pleased to see you got your money's worth! As I briefly mentioned in my review, the sense of depth and dimension for this film is very impressive. A lot of the staging allowed mostly close middle shots with some decent establishing moments. The opening of the film with Romero slinking along bushes and walls and along stone floors is a great example of how relatively boring staging and simple set design actually comes to life because of 3-D. Flat this whole sequence is kinda silly. In 3-D you can appreciate movement, but also small protrusions like branches or his sword scabbard poking out of the screen. The whole film is a 3-D marvel. Maybe not the greatest adventure ever made, but lots of fun thanks to 3-D.

For most of the shorts and Kodachrome Stereo images are given a solid DTS-HD MA 2.0 mix depending on the short in question. They're not very complicated audio tracks - simple narration with some music. Depending on the age of the short there is an appreciable bit of hiss but nothing distracting.

El Corazón y la Espada enjoys two audio tracks - a DTS-HD MA 2.0 Spanish track with English subtitles or an English Dubbed DTS-HD MA 2.0 mix. Both are great but I found the Spanish track to be the more natural. Obviously the dialog syncs better with lip movements, but the sound effects and scoring also ring a bit more true to nature. The English Dubbed track works well too if you don't want to look at subtitles - however, there is a couple of gaps totaling about 3-4 minutes where the English dubbing just stops and the cast roll off with Spanish and then the Dubbing resumes. Whether this is a lost gap in the mix is unknown - I've actually encountered this with several early Mexican productions and it's just one of those things that happens. UPDATE: It turns out when this film was sold for English markets its runtime was cut down thus the missing dialog that simply wasn't recorded.

Really if you want to think of it, the entire set of 3-D Rarities II is like its own bonus features set. With that, we do get a couple of extras tossed into the mix. A pair of great audio commentaries offer terrific insight into their respective films so do give them a listen! As mentioned there's the booklet that offers up a ton more info about the respective shorts and 3-D filmmaking and photography history!

I always come away from a 3-D Film Archive release feeling like I learned something new or at the very least experienced something exciting. For 3-D Rarities I learned that my silly college films could have been made in 3-D if I had the right lens system for the Bolex cameras we used - I've been on the hunt for a set ever since. Now with 3-D Rarities II, I'm trying to find a complete Stereo Realist camera system. Granted it can't be used or processed today but it'd make a fun display piece! On top of seeing some interesting shorts and stereographic photos, 3-D Rarities II gets the fully restored adventure El Corazón y la Espada. Whether you're in this set for just the shorts, the movie, or the whole package, 3-D Rarities II is an essential piece of your three-dimensional collection.

Flicker Alley and 3-D Film Archive join forces once again to deliver a terrific collection of 3-D cinema. With great video restorations and clean audio tracks, this is a fine set. El Corazón y la Espada is certainly the main draw but the whole package is well worth picking through. I particularly loved the Kodachrome Stereo pictures as a fascinating addition to this set. If you love three-dimensional filmmaking - 3-D Rarities II needs to be on your list. Highly Recommended.