Thirteen Ghosts reveals a family who has inherited a massive mansion from their uncle where shortly after moving in, sinister and devilish ghosts begin to wreak havoc on everyone. It's wild, chaotic, and loads of fun that completely earns its R rating for gore and nudity. This new Collector's Edition from Scream Factory has a 1080p HD transfer, a lossless DTS-HD 5.1 audio mix, and a ton of brand new bonus features that should satisfy fans and collectors. Highly Recommended! 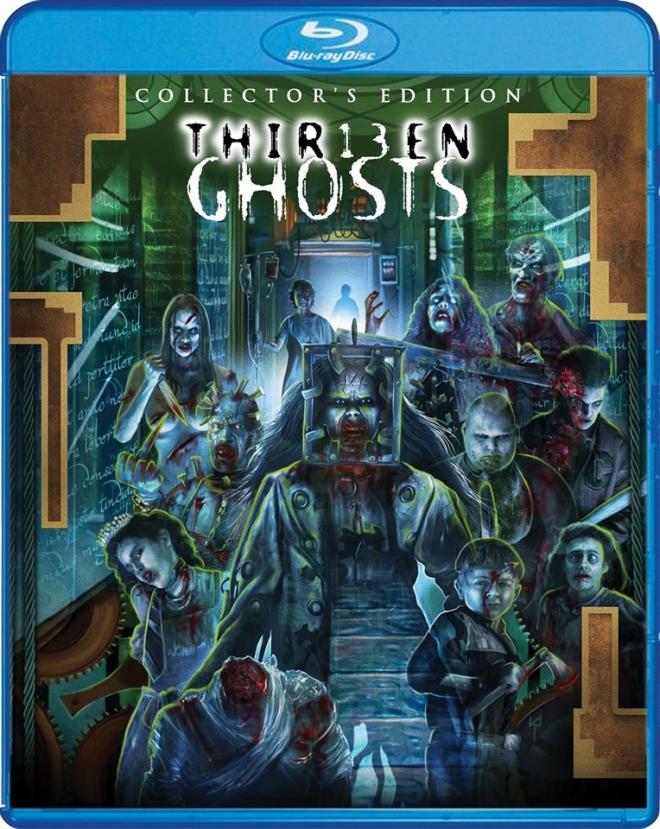 The late 90s and early 2000s saw a cavalcade of beefed-up horror movie remakes with House on Haunted Hill, The Haunting, and more, that usually starred an A-List cast with updated visual effects and a modern-day rock score. Dark Cast Entertainment was a big proponent of these reboots and decided the best course of action was to remake William Castle's Thirteen Ghosts from 1960 and give it a fresh spin for the year 2001. The result was an intense, serious, horrifying film with tons of blood and guts and a heavy dose of nudity. While the visual elements and performances are top-notch, the story at hand fell off the beaten path and strayed into some flashback territory instead of sticking with the terrifying ghosts.

Thirteen Ghosts follows a widower named Arthur (Tony Shaloub) who is barely keeping afloat financially as he supports his two children Kathy (Shannon Elizabeth) and Bobby (Alex Roberts) with the help of their nanny, Maggie (Rah Digga). Arthur has a rich uncle by the name of Cyrus (F. Murray Abraham) who was recently killed, leaving his giant mansion to Arthur. In order to give his kids a better life, the four move into the big glass-maze of a house.

It turns out that Cyrus was involved in the dark arts of satanic rituals and ghosts, which is how he was killed off in the first scene. Once inside the house, the new family accidentally permanently locks the house from escape and unleashes a baker's dozen violent ghosts who cause havoc, bloodshed, and scares amongst the family. With the help of Cyrus' wild assistant Dennis (Matthew Lillard) and supernatural medium Kalina (Embeth Davidtz, these six people try and survive a torturous death while helping free the dead souls from their eternal torment.

Director Steve Beck (whose only two film credits are this film and Ghost Ship) took a very different approach from its source material. Instead of a methodical, haunting, psychological horror film, Thirteen Ghosts amps everything to its maximum limit and never lets up. Its original score of music is fast-paced with a pulsing beat and the visual elements of scares are all stylized with quick flashing lights, smoke, and quick cuts that cause a constant frantic feeling of dread. There's barely any time to breathe, whoever the story is consistently trying to tell backstories of these ghosts which slows down the pacing a bit and is knocked off its track of plain horror with Arthur still mourning his wife's death and more secrets being revealed about the Cyrus and his work.

Beck utilizes the audio and lighting in his film to a chaotic effect where everything is loud, flashy, and on the nose. It's quite the spectacle and falls in line with a lot of film's visual styles of the late 90s. Beck does, however, employ a few cool homages to the original 1960 film though. In the original movie, people in the theater were given 3D glasses in order to see some of the fun ghosts and apparitions appearing in the film, as William Castle was known for his fun, cheap gimmicks during his feature film presentations. In this remake, the characters must wear these eyeglasses in order to see the ghastly undead ghosts who are trying to kill them, which was a fun homage.

Thirteen Ghosts does hold up some twenty years later in a way that it's bold, loud, and proud of what type of movie it is. It didn't shy away from censors to be something dumbed down for a younger audience, but instead went the full hardcore gore and nudity route with a quick pace. There are very few films that are released today that evoke that chaotic style, but Thirteen Ghosts did it well and earned its way to stand with some of the great horror remakes.

Thirteen Ghosts haunts its way on Blu-ray inside a Collector's Edition from Scream Factory. The disc is housed in a hard, blue plastic case with a cardboard sleeve. There is some fantastic new artwork for the film that features all the horrifying ghosts of the movie looking straight out at its audience. The sleeve cover art is reversible with the new artwork as well as the original movie poster art. 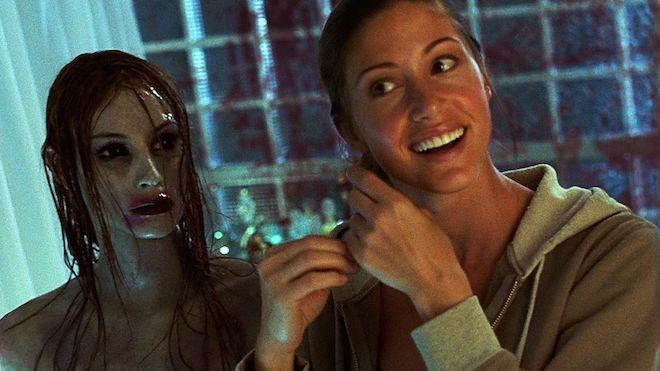 Thirteen Ghosts was originally released on Blu-ray back in 2010 but has now made its way to a Collector's Edition for Scream Factory. Unfortunately, there doesn't look to be a brand new, amazing transfer here, but instead more or less the same 1080p HD image from the previous film in its 1.85:1 aspect ratio.

The colors have a couple of different palettes throughout the film, none of which are super elaborate. The ghosts and haunting images of smoke and lighting tend to have a silver and purple color scheme to them with varying levels of red color for blood. It's a colder look image for the most part. To contrast with the decaying life forces surrounding the family, the house itself looks magnificent with some bright gold, red, and orange color palettes surround the walls, furniture, and lighting. These brighter primary colors tend to stand out more than the other darker images. Black levels are mostly deep and inky, but there is a tiny bit of crush and murky low lit scenes that bleed over.

The detail can be sharp in brightly lit sequences, but on the whole, there are some soft looking scenes with the ghosts, which is a shame, because there are some truly phenomenal practical makeup effects that would have looked amazing with a better video presentation. Still, some of the mortal wounds, guts, and gore look decent enough as do the closeups that reveal scars, individual hairs, sweat, and blood drippings. The Latin inscribed glass walls show wonderful textures as do the costumes throughout. Skin tones are natural as well. There are no major video issues with aliasing or banding, but there's a little video noise that crops up from time to time. 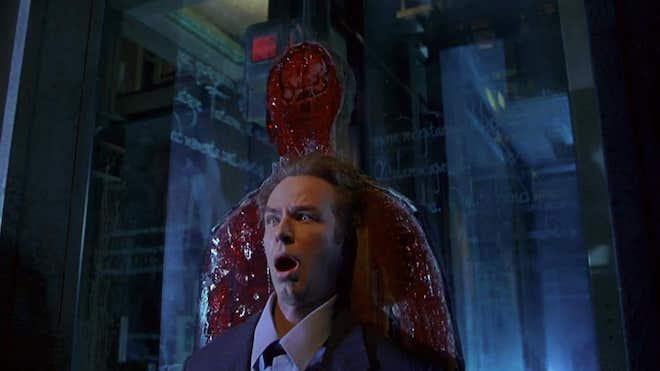 Thirteen Ghosts comes with a lossless DTS-HD MA 5.1 audio track that is boisterous, loud, and unmerciful. That's a good thing when it comes to a horror film like this one. There are a ton of sonic moments that enhance the visuals on-screen, such as the wild ghosts that conjure up big scares by their screams and chains they bring with them. The ghostly noises that go bump in the night run rampant throughout the house and sound off nicely on the surround speakers with some very good directionality.

Other sound effects are well-balanced and offer up a loud crescendo when all seems calm. The bass kicks into high gear quite often that will rumble walls as well. The musical cues are energetic with a rock-like symphony that never lets up. Dialogue is clean and easy to follow with all the commotion that is going on in the background as well. 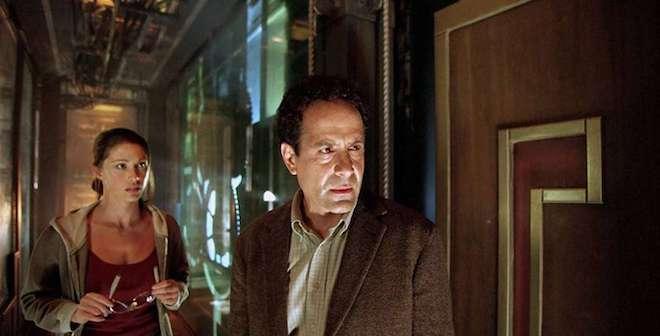 There are around 137 minutes of bonus material, along with two commentary tracks. Around 54 minutes of these extras are brand new bonus material, consisting of interviews with the cast and crew present day. Also included are the previous extras that are imported on this new Collector's Edition. There's a lot to watch here, all of which is great info. 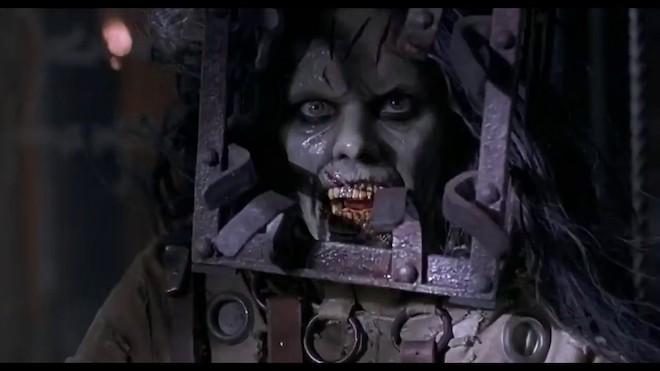 Thirteen Ghosts is a time machine back twenty years ago where most horror films were hellbent on buckets of blood, guts, nudity, and fast-paced music with an all-star cast that remade older horror films. For those elements, Thirteen Ghosts stands the test of time and is still a blast to watch, despite its many flaws. There's no new HD transfer, the DTS-HD track sounds great, and the brand new bonus features are definitely worthwhile. Worth the upgrade and Highly Recommended!