Ghost Ship set sail in 2002 and is now part of Scream Factory's Collector Edtion Series. The film follows a crew who is set to investigate and salvage a ship that disappeared decades ago but is now haunted and sadistically killing each and every crew member in the present day. It's a haunted house scenario but on water. There is no new HD transfer, but there are a good DTS-HD 5.1 track and some brand new bonus features along with some vintage extras. This release is FOR THE FANS. 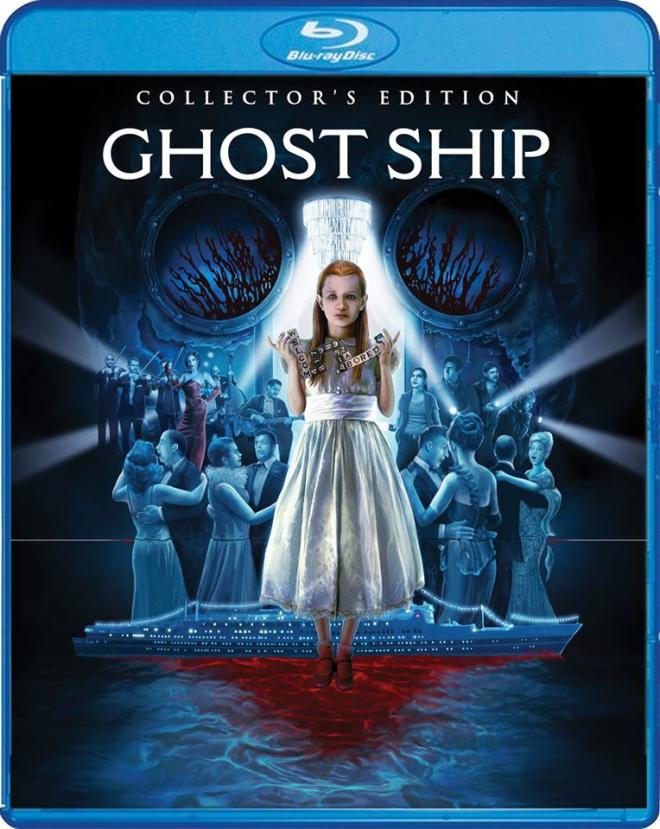 Director Steve Beck only made two feature films during his career, including the 2001 horror movie Thir13en Ghosts and Ghost Ship in 2002. Dark Castle Entertainment was the new kid on the block, releasing horror films once a year to coincide with Halloween and they were more or less succeeding on a financial basis. With the moderate success of Thir13en Ghosts, Dark Castle Entertainment offered Ghost Ship to Steve Beck, which is basically the same film but instead of malevolent ghosts in a house, there are sinister apparitions on a boat. It's a similar story with a different setting, much like how Speed and Speed 2: Cruise Control was made. Despite the truly masterful and excellent opening five minutes of Ghost Ship, the rest of the film sinks below the surface with run-of-the-mill plot lines, attempted jump scares, and a few whacky story points that all try and mold together for a cohesive movie. If it weren't for the highly memorable opening sequence, Ghost Ship might have been lost at sea forever.

Ghost Ship opens aboard the luxury ocean liner SS Antonia Graza in the early 1960s, where the passengers of the ship are dressed formally and dining with one another to a romantic tune. It's a lovely, joyful evening in the middle of the ocean when the camera suddenly cuts to an arm fidgeting with a lever that releases a sharp cable wire that is cut loose and swings the length of the whole ship, slicing and dismembering everyone on board in half. It's remarkably gruesome. The only survivor is a young girl named Katie due to her height.

Cut to the present day where a ragtag group of sailors aboard the Arctic Warrior (a salvage ship) is tasked by a mysterious person to locate the Graza that has been missing for some forty years. Onboard the ship is Captain Murphy (Gabriel Byrne) and first mate Epps (Julianna Marguiles), along with a few crew who are most likely to meet their bloody demise within 90 minutes, including Greer (Isaiah Washington), Munder (Karl Urban), Dodge (Ron Eldard), and Santos (Alex Dimitriades).

While exploring the Arctic Warrior, the crew finds a ton of gold bars, which start a chain reaction of frightening hauntings followed by vicious supernatural murders on the sea, then rinse and repeat until the credits roll. As the movie goes on, it's told that a few people the crew has come in contact with might be something more sinister from hell down under and need a few souls to keep things in working order. It's here where Ghost Ship falls off the rails. If it stuck to the simple art of a haunted boat, it would've played out better.

Director Steve Beck certainly kept the pace alive and well in Thir13en Ghosts, but after the first sequence in Ghost Ship, the pace slows to a crawl where Beck and the studio just repeated their previous film on water. It's routine, lethargic, and tries to convolute the basic story into tangents that deal with the inner demons of the crew, supernatural problems, and more. Additionally, Ghost Ship is highly predictable from its first ten minutes but tries to play it smart without any cleverness as Beck quick cuts between characters and their jump scares that takes out all sense of dread, horror, and suspense in each scene. Characters are stereotypes of themselves that don't really go anywhere and the score is a wild tangent mix of some haunting music notes mixed in with heavy metal and other genres that don't form any sense of a cohesive palette. Ghost Ship starts off with good intentions but quickly sinks to the bottom of the abyss with no life support.

Ghost Ship sails its way to Blu-ray inside a Collector's Edition from Scream Factory. The disc is housed in a hard, blue plastic case with a cardboard sleeve. There is some fantastic new artwork for the film that features all the terrifying ghosts in an ocean of blood. The sleeve cover art is reversible with the new artwork as well as the original movie poster art. 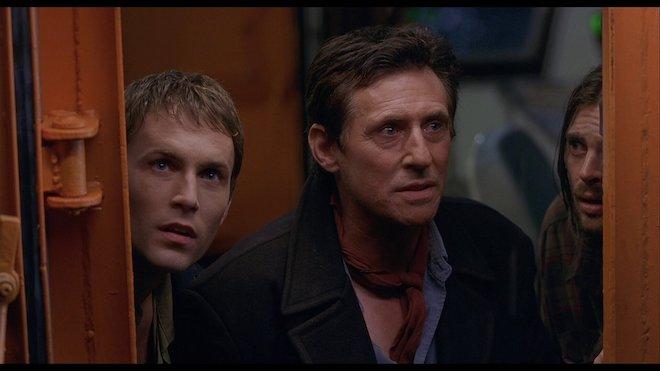 Ghost Ship was originally released on Blu-ray back in 2009, but now Scream Factory has released the film as part of its Collector's Edition. Unfortunately, there is NOT a new scan or transfer here in 2020, but rather the same image from eleven years ago, being a 1080p HD transfer in 1.85:1 aspect ratio.

The color palette is dour with dark blues, grays, silvers, and rust like oranges and brown aboard the ship. None of these colors are bright but are rather decayed in flavor. The best use of color is with the opening scene with luxurious wardrobe choices, some ambient bright boat lighting, a red dress, and of course the tanks of blood the pour out with a bright red glow. Other than the obvious gory bits throughout the film, the expected color spectrum is cold and lifeless. Black levels are somewhat deep and inky, but there are some murky shadows and lighter than normal dark spots that haven't aged well.

The detail can be vivid in brighter sequences, but those instances are so spaced out and don't pop up often. Facial features of sweat, water droplets, wrinkles, and hairs are showcased here and there, but the image is mostly flat. Practical makeup effects would look incredible, but again, this video presentation just isn't up to par with the year 2020 and comes across as soft. The source material is still intact, but the image just needs a good cleaning. 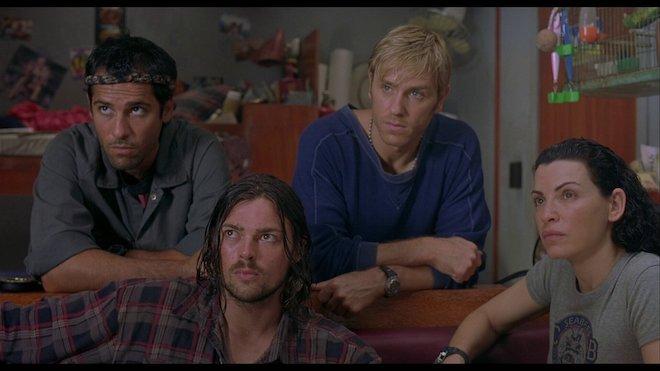 This Collector's Edition release comes with a lossless DTS-HD MA 5.1 audio track and has some decent elements behind it. This soundtrack doesn't pop at full force on a consistent basis, but it kicks into high gear when it has to. Most of the time, the audio is front and centered with dialogue from tall the characters as they're either talking softly or yelling commands aboard a large ship. The track handles these cues with tenacity and energy with some excellent dynamics.

Sound effects can be robust and loud when an explosion is rigged or other haunting effects are in place with some good directionality. The low end of bass does have a nice rumble, but will never shake the viewing room. Musical cues always keep with the suspense of the film, but the heavy metal and techno tracks always sound louder and harder than anything else happening on screen. 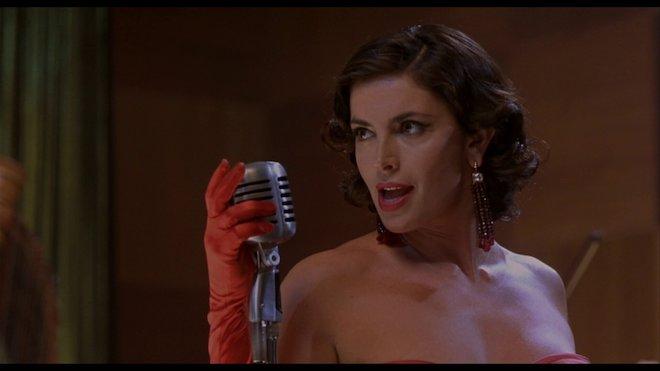 There is about an hour worth of bonus material including here with a brand new commentary track from the director. There are only 21 minutes of new bonus features, including three new interviews. 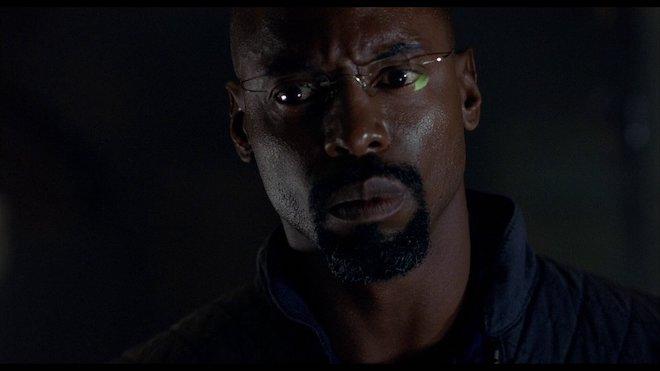 Scream Factory's Collector's Edtion of Ghost Ship should service fans of the film just fine. That first sequence alone is worth the price of admission, along with some other gory bits sprinkled through the course of the movie. There's no new video transfer, but the DTS-HD 5.1 track is satisfactory and there are some brand new bonus features that make this release worthwhile. For Fans of the Film.