Jan de Bont's natural talent for building suspense, unfortunately, didn't translate well for 1999's The Haunting starring Liam Neeson, Catherine Zeta-Jones, and Lili Taylor. A loose adaptation of the classic Shirley Jackson novel, there are parts that work extremely well, but when the studio tinkering comes in it's painfully obvious and disjointed. The Haunting lands on Blu-ray as the tenth feature of the Paramount Presents label complete with a terrific video transfer, excellent audio, and a couple decent albeit short bonus features. It may not be a premier title but it's still a fun haunted house flick and makes an excellent arrival on Blu-ray. Recommended

"…Jesus Christ, we have to get out of here."

Dr. David Marrow (Liam Neeson) is studying the effects of fear. In order to have the perfect test subjects, he's lured three people to Hill House under the false pretense they're to participate in a sleep study for insomnia. There's the brash and funny guy Luke (Owen Wilson). There's Theo (Catherine Zeta-Jones) who's open sexuality exudes in everything she does and says. And then there's the quiet, homely Nell (Lili Taylor) who is just trying to recover from the death of her mother who she cared for for the last decade. The housekeepers Mr. Dudley (Bruce Dern) and Mrs. Dudley (Marian Seldes) won't stay after dark… and for those who stay behind, the things that come out at night have a deep dark history threatening their very lives. 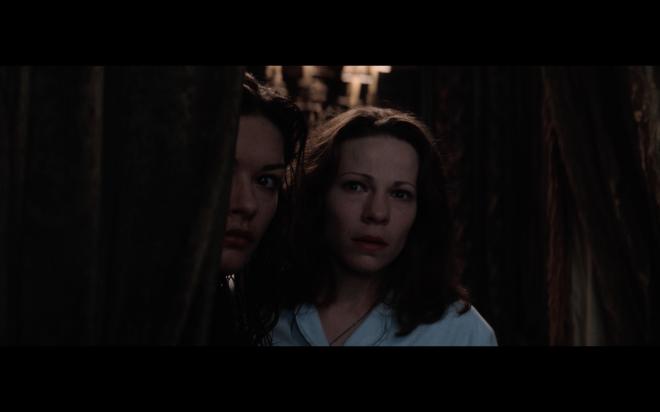 What happened to Jan de Bont? A master cinematographer with an iconic catalog of titles to his name, he made a big splash with his first directorial efforts of Speed and Twister - earning big box office receipts in the process. Sure, Speed 2 is arguably one of the worst films ever made and a massively expensive flop, but The Haunting was a modest success, and Tomb Raider The Cradle of Life was a decent flick even if it didn't earn back its budget. All of a sudden, the man's career is like the ghosts found in this 1999 retelling of Shirley Jackson's classic novel. The man had a knack for building suspense and big set pieces, and that ability is in full swing with The Haunting. Or rather for the first half of the movie.

It has been the better end of fifteen years since I actually sat down and watched this movie all the way through. When it hit theaters I remember enjoying it - especially loving the sound design - but being underwhelmed in the home stretch. Far from perfect, it provides some diverting entertainment with a few good bumps and scares along the way. Watching it today I can spot the flaws that sank this movie with critics and a number of audience members; namely the third act. There are a lot of stories and rumors about a rough post-production that included Stephen Spielberg removing his Executive Producer credit and or possibly even reshooting key sequences himself.

Originally planned as the first Spielberg and Tom Cruise collaboration, the script wasn't where it needed to be and Spielberg more or less traded projects with Jan de Bont to do Minority Report. Unfortunately for de Bont, the script never really came together. Unable to get the rights to properly remake the excellent 1963 The Haunting - they went back to Shirley Jackson's original source novel. At one point Steven King was tapped to adapt the screenplay but that more cerebral and authentic take on the classic book was scrapped for a more conventional summer movie rollercoaster ride - and it shows.

The first half of the film is great. It's all character setup, we meet Nell just after her mom died and her gold-digging sister is trying to screw her out of the inheritance. We meet Liam Neeson's Dr. Marrow and understand he's willing to bend ethics to understand fear and why it works in our bodies. We get two more paperweight characters of Zeta-Jones' Theo and Wilson's Luke to round out the cast. The situation is set up, the stakes are established… and things start to go bump in the night! There are a number of aspects to this movie that stay somewhat true to the book. Various character names, settings, and a few of the scary set pieces that provide the mood and atmosphere are all from the book - and they're great because they're tangible and you feel the danger.

It's when we get bendy walls and CGI ghosts that this show starts to hit some speed bumps. Some of these effects are scary because they were done practically with rubber walls and decorations that could stretch and pull but go back to their original shape in a snap. Other "scares" and beats all feel studio-designed to ensure the film was a summer-time action rollercoaster instead of a genuine horror film. The last act is a CGI-heavy special effects-driven cliche that spirals a promising start into an unsatisfying and bizarre conclusion.

As I watched this movie again I was immediately taken in by the excellent sound design. With its penchant for establishing mood and atmosphere, it also gives plenty of creepy moments with impeccable distinct object placement to give you a jolt. Add in another great score from Jerry Goldsmith and you have the makings of a great horror movie soundscape. But that halfway point kicks in and all of a sudden the house needs to very literally  "come alive," and things fall apart. Cap it off with an ending that flat doesn't work and The Haunting becomes a middling piece of late 90s summertime escapism. And like so many other remakes, it's best to stick to the 1963 original. I don't hate this movie. There's a lot to enjoy, but the sum of its parts don't add up to anything grand or memorable instead highlight a film that could have been better - and make you wonder where Jan de Bont ran off to.

The Haunting scares up its first Blu-ray release as the tenth film in the Paramount Presents collection. Pressed on a Region Free BD-50 disc, the disc is housed in a clear case with a slipcover with spine number 10 that opens up to reveal the original theatrical poster artwork. A Digital Copy slip is also included. The disc loads to a static image main menu with traditional navigation options.

As with all Paramount Presents releases, this disc was sourced from a recent 4K transfer that was reportedly supervised by Jan de Bont himself - and the results are fantastic! From frame one there is an impressive amount of clear detail in facial features, production design and costuming. Once the film moves to the creepy Hill House all of the intricate architecture is on display. Facial features also offer a lot to see and appreciate. Colors are robust favoring warmer red tones for some healthy skin coloring while allowing for excellent primary pop. Black levels are on point throughout giving the image a terrific sense of depth.

Film grain is very fine - as it has appeared for a number of these Paramount Presents releases - but it doesn't show any signs of being scrubbed to death, there's too much fine detail to suggest any DNR usage. The source elements are also in terrific shape without any signs of wear and tear or speckling. I'd have been very curious to see what a native 4k UHD Blu-ray release with HDR could do for this one - however - I worry about some of the CGI heavy sequences. Even in 1080p some of the CGI effects appear very weightless and the film's finale which was apparently a rushed reshoot looks particularly iffy. That's not an issue with this transfer but the side effect of how improved resolution can sometimes point out flaws. Overall this is an excellent transfer.

The Haunting gets some spooky auditory life out of a sold Dolby TrueHD 5.1 mix. I would have loved to hear this with Atmos but as is, this is a terrific mix. In the opening flyover shot of the movie with the house lingering in the woods, there's a delightfully creepy low drumming sound like a pulse that ever so slightly rattles the subs and gradually returns throughout the movie only more and more intense. Throughout there are pin-point specific sound effects throughout the channels with a thump or a bang bouncing the rear left, right, or sides to give you some decent jumps.

Jerry Goldsmith's score provides the right accent to a movie steeped in atmosphere. With a lot of quiet space in the early scenes, the house feels big with audio elements moving about the soundscape. Dialog is crystal clear throughout - and the creepy ghost whispers that crop up from time to time punch the mix in all the right places to add tension. Free of any age issues or other faults, this is a great mix. This movie's always had excellent audio so I'm glad to see this disc be given the same treatment. That said, I wish I could find my old DVD with DTS audio to offer up a full comparison. If I can find it I'll revisit this section accordingly.

Unfortunately, the bonus features package is pretty light. The Filmmaker Focus session with Jan de Bont is interesting as he does tactfully highlight the behind the scenes issues with making the movie without throwing anyone specifically under the bus. These interviews are always interesting but never long enough. At a little over nine minutes, it feels like a longer more interesting interview was done but not fully presented. The rest of the materials here are archival.

1999's The Haunting isn't specifically a bad movie, just an underwhelming one. What should have been a terrific exercise in suspense and terror, puddles out at the end with a barrage of genre cliches and unnecessary cheap-looking CGI. Jan de Bont may have faded away from directing, but he left a mark and this movie does have visual panache and an earnest pace, but you can feel studio meddling in the home stretch. As the 10th release of the Paramount Presents premier Blu-ray label, this fright flick gets a terrific new transfer and an effective moody audio mix. Bonus features are a bit slim. If you're a fan of The Haunting - this is a solid release worth adding to the collection. Recommended.