Another highly entertaining, muscular film noir that's been largely forgotten for decades, Trapped has been rescued from obscurity and lovingly restored by the Film Noir Foundation and UCLA Film & Television Archive. This gritty crime drama stars a young Lloyd Bridges as a counterfeiter on the lam who hopes to sell his valuable templates and hightail it to Mexico with blonde bombshell Barbara Payton before the Feds take him down. Briskly directed by a still unknown Richard Fleischer and featuring an exciting finale in an L.A. trolley yard, Trapped wears its B-movie conventions like badges of honor as it consistently scores on a number of levels. Flicker Alley's handsome Blu-ray+DVD presentation includes a stunning transfer that rises above its banged up source material, excellent audio, a few quality supplements, and a gorgeous 24-page booklet. Recommended.

Back in the 1930s and 1940s, when movies were considered a commodity rather than an art form, many fine films fell into disrepair after their studios squeezed as much cash out of them as they could. Independent productions especially suffered. Like orphans, they lacked a home studio that would store them in a comfy vault, so they bounced around, and after years of mishandling, poor duping, and general neglect in the cinema purgatory known as the public domain, they literally began to crumble.

Trapped is the poster child for that type of film. Shot in 1949 by a young Richard Fleischer and providing 36-year-old Lloyd Bridges with one of his first starring roles, this taut, low-budget, suspenseful crime drama deserved a much kinder fate. Its crooked, dead-end characters get the retribution they deserve, but the film itself was denied its happy ending...until now. Were it not for a private collector who dropped off a 35mm acetate print at the Harvard Film Archive, which in turn notified the Film Noir Foundation, we might never have seen Trapped again. Now, after a restoration by the UCLA Film & Television Archive and subsequent Blu-ray release by Flicker Alley, Fleischer's film is back from oblivion and ready to be appreciated anew.

Trapped is far from a masterpiece, but it's a nifty little noir that's got sass, sex appeal, and plenty of gritty undertones. Its counterfeiting storyline and police procedural presentation strongly resemble the much-better T-Men, released a couple of years earlier (producer Bryan Foy undoubtedly tried to duplicate that film's unexpected blockbuster success), but Trapped manages to overcome the comparison and project its own unique identity. Fleischer, much like T-Men's Anthony Mann, infuses his run-of-the-mill narrative with an artistry and driving rhythm that cleverly mask its inherent mediocrity, and the result is a rip-roaring movie that extracts as much juice as possible from its various components. 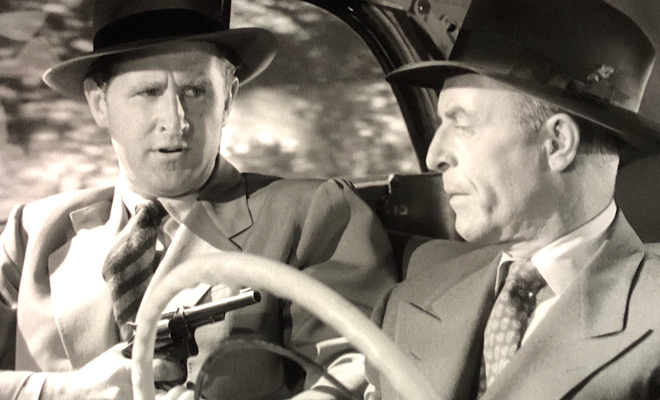 The film opens with a somber Voice-of-God narration extolling the virtues of the U.S. Department of Treasury. The "don't mess with us" prologue sets the story's tone and segues seamlessly into the chronicle of a government operation to shut down a resilient counterfeiting ring. The Feds enlist convicted inside man Tris Stewart (Bridges) to participate in their sting operation, but once they spring him from the brig, Tris bolts and reconnects with his hot-to-trot flame Meg Dixon (Barbara Payton), who works as a cigarette girl in a local nightclub.

Tris wants to get back to business, but to do so he must reclaim the impeccably crafted plates used to print the fake money. Undercover agent John Downey (John Hoyt) has his eye on them, too, and with Meg's unwitting help, he's able to gain Tris's trust. What follows is a high-stakes game of chess as Downey tries to thwart Tris's scheme and snag the coveted plates without blowing his cover and putting his life at risk.

A few clever twists and some palpable suspense fuel Trapped, which is capped by an exciting, breathlessly filmed finale at a Los Angeles trolley yard. Other L.A. locations enhance the tale's authenticity and contribute to the film's semi-documentary feel. Fleischer, who would soon direct the iconic B-movie noir The Narrow Margin before graduating to A-list projects, employs a robust, no-holds-barred style that works especially well in a couple of scrappy fight scenes. Though Trapped is pure fiction, Fleischer infuses it with the same brand of stark realism that would distinguish his later true-crime pictures, most notably Compulsion, The Boston Strangler, and 10 Rillington Place. 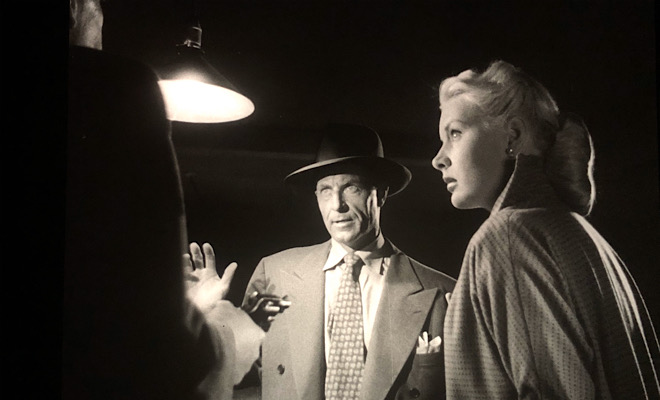 Mired for years in small parts and unbilled bits, Bridges had just begun to play B-movie leads when Trapped rolled around, and he makes the most of the opportunity. As a nasty thug whose cocky grin hides a mile-wide violent streak, he exudes a magnetic machismo that dominates this testosterone-fueled yarn. Bridges spent more time in westerns than dark-themed noirs, but his fine work in Trapped proves he would have punched up similar pictures had he been cast. Mysteriously, his character drops out of the narrative a good 20 minutes before the movie concludes, leaving a void that's tough to fill. I kept waiting for him to reappear, but Bridges remains AWOL, even during the impressively mounted climax.

That's an odd twist, but tossing curveballs is one of Trapped's strengths. Another is Barbara Payton, who certainly raises the temperature as the smoldering blonde willing to do anything for Tris. Just 21 at the time, Payton projects a maturity beyond her years and a feline fierceness that would define her turbulent, scandal-ridden off-screen life. A voracious appetite for alcohol and Hollywood bad boys would be her downfall, and her promising career, which took off like a rocket after Trapped, crashed and burned only a few years later. Petty crime, severe alcoholism, and prostitution followed, all of which hastened a physical decline that would result in Payton's death from heart and liver failure in 1967 at the tender age of 39.

As the undercover Treasury Department agent, Hoyt is Trapped's unsung hero. (He's also an often unsung actor who enlivened countless films over the course of a lengthy career.) His character is the only one we really care about, and his calm yet steely demeanor stands in stark contrast to the blustery Bridges and pouty Payton. It's tough to make a deadpan, just-the-facts-ma'am Fed endearing, but Hoyt accomplishes the task, adding a welcome dash of warmth to a stone-cold crime yarn.

Fleischer's muscular style, refreshing brashness, and youthful enthusiasm draw us into the drama, and his artistic contributions elevate Trapped. It's still a B movie and a relatively inconsequential film noir, but Trapped makes its mark as an engrossing, often exciting bit of hard-boiled entertainment. Though we might not have missed it had it slipped through the cracks, I'm sure glad Trapped was rescued, restored, and released so everyone can enjoy it. I sure did. 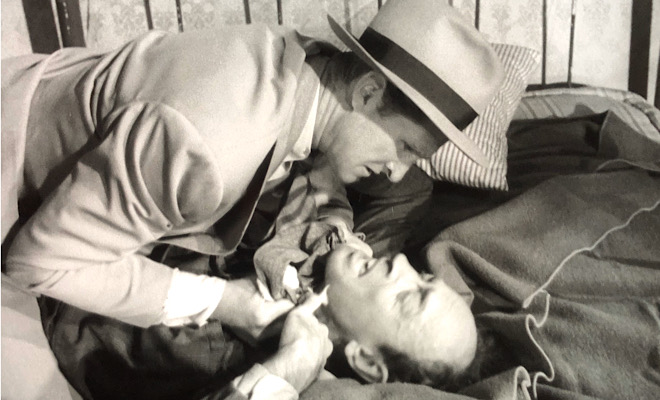 Trapped arrives on Blu-ray packaged in a standard clear case. A gorgeous 24-page booklet featuring mini bios of several cast and crew members, rare photos, storyboard reproductions, and full-color reprints of various promotional materials is tucked inside the front cover. Both Blu-ray and DVD discs are included in the set. Video codec is 1080p/AVC MPEG-4 and audio is DTS-HD Master Audio 1.0. Once the disc is inserted into the player, the static menu with music immediately pops up; no previews or promos precede it.

Trapped was trapped in public domain hell for decades, but thanks to the efforts of the Film Noir Foundation, this gritty crime drama was rescued from obscurity and lovingly restored by the UCLA Film & Television Archive. Though some of the damage to the movie - a result of years of neglect and poor handling - is probably irreversible, this 1080p/AVC MPEG-4 transfer from Flicker Alley revitalizes Trapped and presents it in the best possible light. Full disclosure: Imperfections abound. Consistent speckling, marks and blotches of various sizes, faint vertical lines, reel change markers, and occasional image instability plague the presentation (the opening credits are, frankly, a mess), but strangely enough, they don't sabotage it. Top-notch clarity and contrast mixed with just the right amount of grain produce such a vibrant, beautifully contoured, film-like image, our eyes often ignore the ever-present print damage. The stark, realistic cinematography from Guy Roe is well rendered, with rich blacks, bright whites, and nicely varied grays combining to create a picture that brims with fine details and features excellent shadow delineation. Close-ups are dazzlingly sharp, highlighting pores, perspiration, and hair follicles. Though the print damage bumps down the video score, don't let it dampen enthusiasm for what is a truly superior effort. Trapped may have been put through the wringer over the years, but it wears its battle scars like badges of honor and emerges looking better than ever before.

The video may look a bit messy, but the DTS-HD Master Audio mono track is clean as a whistle. Any age-related surface noise has been meticulously erased, leaving in its wake crystal clear audio. All the dialogue is well prioritized and easy to comprehend, and sonic accents like gunfire, shattering glass, revving car engines, screeching wheels, and assorted fisticuffs are crisp and distinct. Good fidelity allows Sol Kaplan's score and incidental background music to fill the room with ease, while a wide dynamic scale embraces all the highs and lows and keeps distortion at bay. Though this isn't an especially flashy track, it does its job in a matter-of-fact manner that complements the movie.

A few quality supplements add luster to this Blu-ray/DVD release.

Trapped makes a long overdue appearance on the home video scene with an impressive restoration that infuses this B-grade film noir with newfound vitality. Exciting, suspenseful, well directed by Richard Fleischer, and nicely acted by a strong cast led by a square-jawed Lloyd Bridges, this taut crime drama about a ruthless counterfeiter, his devoted moll, and the Treasury Department's dogged efforts to bring them to justice stands as a fine genre specimen that still delivers the goods. The source material may be far from clean, but the transfer looks terrific, and an array of quality supplements and handsome packaging make this another stellar Flicker Alley release. Trapped is rough-and-tumble, no-frills fun that will please any noir enthusiast. Recommended.

Sale Price 34.99
List Price 59.98
Buy Now
3rd Party 36.85
In Stock.
See what people are saying about this story or others
See Comments in Forum
Previous Next
Pre-Orders
Tomorrow's latest releases